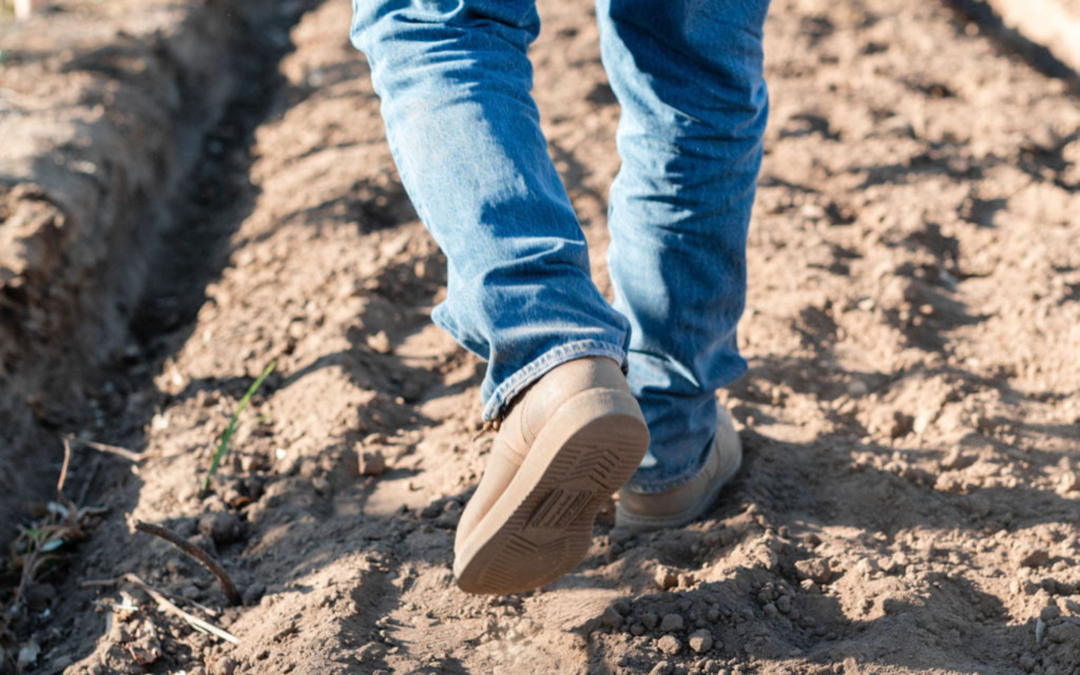 Topsoil tillage is a concept familiar to grape growers. It is so familiar, in fact, that most growers intuitively know the best implement and the best timing to incorporate weeds or cover crop residues into the particular soil in their vineyard. Less familiar is deep tillage (deeper than about 18 inches), which simultaneously affects both the topsoil and subsoil. It is a valuable soil management practice that can provide substantial benefits to vineyard root zones. The methods and many aspects of deep tillage are the subjects of this article.

The Goal of Deep Tillage

The goal of deep tillage is root zone uniformity across the vineyard management unit with regard to depth, unrestricted subsurface drainage, and ample permeability to air, water, and roots. Applications of mineral and organic amendments immediately before deep tillage operations further enhance the physical character of the root zone, as well as chemical and biological characteristics across the block (Figure 1). This combination of actions, deep tillage, and amending, promotes uniformity in vine size and growth capacity. Such uniformity facilitates consistent fruit yields and quality, as well as efficient vineyard operations. 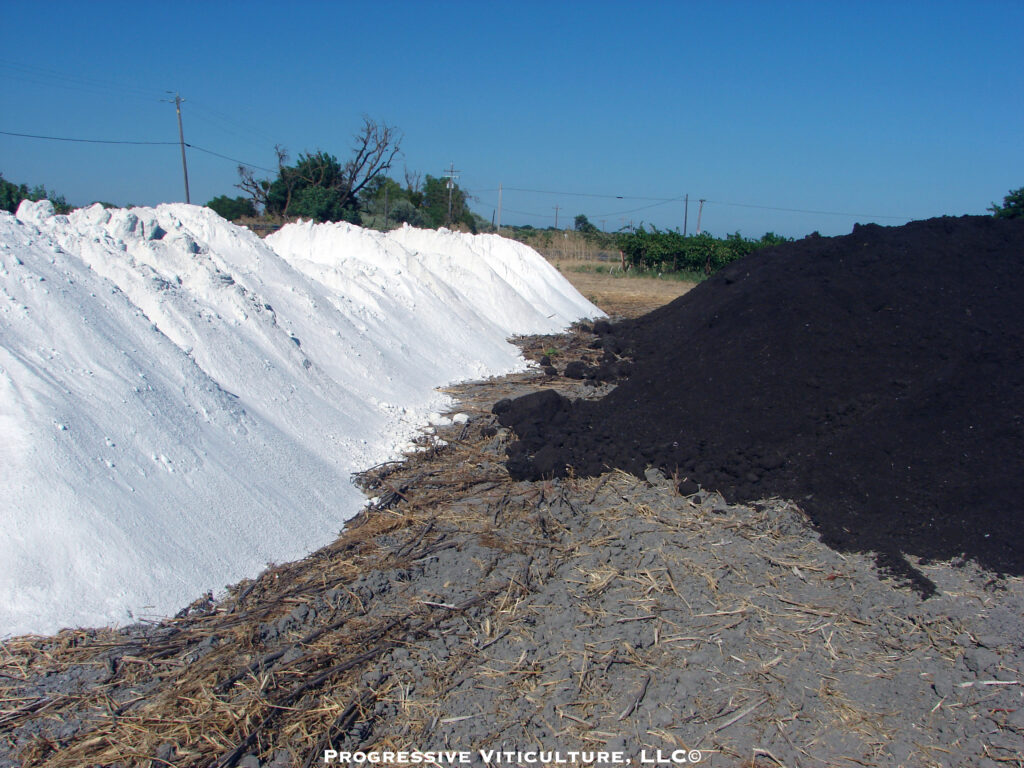 In established vineyards, periodic ripping to a depth of 18 to 24 inches alleviates surface crusts and compaction that develop over time. Such shallow ripping of tractor-row soils is sometimes called chiseling or subsoiling. Many rippers designed for this purpose have curved or parabolic shanks that produce some degree of lift to enhance soil shatter.

Figure 2. (A) A multi-shank vineyard ripper with parabolic shanks and (B) a vineyard ripped adjacent to the vine rows to alleviate equipment-induced soil compaction. (Photo Source: Progressive Viticulture, LLC©)

Ripping with a single shank in the center of the tractor row creates a channel for air and water penetration, ripping with two shanks positioned in the equipment tread paths eliminates compaction from traffic, and ripping with three or more shanks can open up the soil across the entire tractor row to air, water, and elongating roots (Figure 2). In any given autumn, rip only every other tractor row to control root pruning and the potential for reduced growth vigor the following spring. 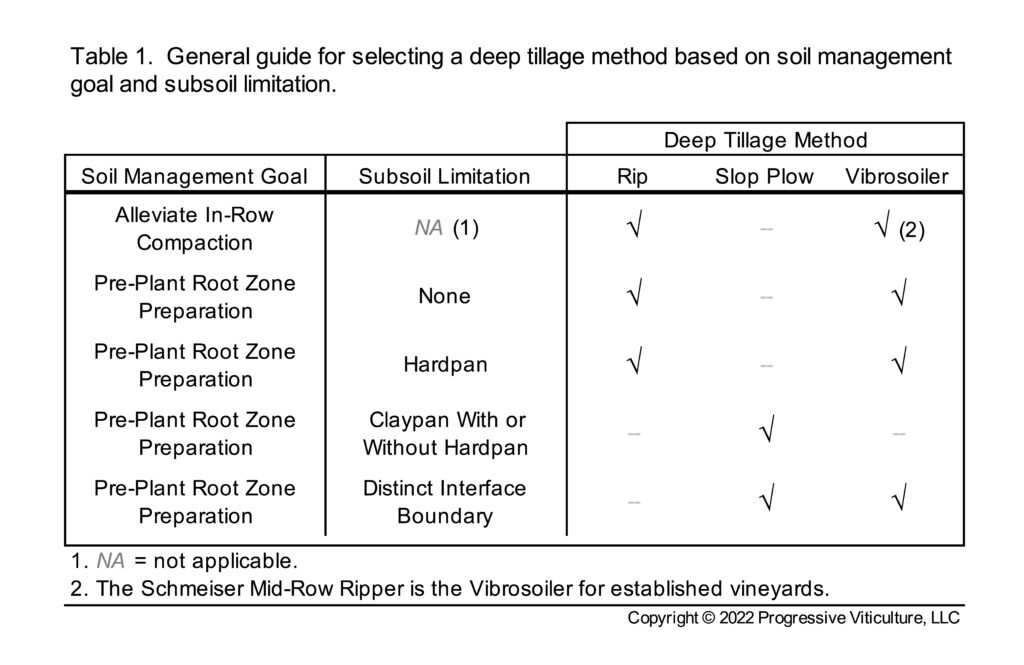 Currently, there are two ways to garner sufficient soil information to make sound deep tillage decisions. The traditional method involves visual inspection of soil profiles in strategically located pits made with a backhoe and laboratory analysis of soil samples collected from the walls of the pits. The high-tech alternative involves electronic sensors, computers, and lab analysis to create a set of maps of soil characteristics through products such as the Soil Information System (SIS).

In these cases, cross-ripping to a consistent depth of three to five feet with one or more shanks alleviates compaction and creates a uniformly permeable and well-aerated environment for roots and microbes. (Note: In California, soils shallower than three feet are generally not suitable for commercial vineyards unless they are underlain with permeable decomposed or highly fractured rock, as sometimes occurs in the Sierra Nevada Foothills and Coast Range.) Oftentimes this type of deep tillage is also appropriate for reworking soils before vineyard replanting.

Within a soil, the shattering effect of the ripper extends only a short lateral distance on both sides of a shank. Therefore, passes with single shank rippers must be closely spaced to ensure a sufficient portion of the future root zone is impacted. Aligning tractor passes track-on-track (8 feet apart or less) normally achieves this.

In addition, soil with limited moisture is a prerequisite for effective ripping because wet soils smear and shatter negligibly, and they are prone to compaction under the weight of ripping equipment. Consequently, ripping is commonly an autumn activity.

Finally, for maximum soil shatter and uniformity across the field, cross rip with the first pass in the direction of the vine rows and the second pass at a forty-five degree to the first. Following ripping, disk down the ripper marks and float the field with a land plane or similar grading implement to remove small depressions, which become puddles that prevent vineyard access after rains.

Soils with dense subsoil hardpan layers, whether cemented or formed under pressure (indurated), typically require very deep ripping (5 to 7 feet) with a single shank to ensure the hardpan is completely penetrated and disrupted, and the root zone has adequate subsurface drainage. Again, cross-rip and finish the soil surface as described above. Subsoil hardpan layers disrupted in this manner will not reform.

Soils with subsoil claypan layers require more than simple ripping. If simply shattered, claypans will reform given enough moisture, traffic, and time. To prevent claypans from reforming, slip plow through them. A slip plow is a long ripper with a narrow ramp attached near the tip. From there, the ramp extends upwards and away from the shank at an acute angle towards the rear of the implement (Figure 3).

Figure 3. (A) The inclined ramp behind the shank of a slip plow and (B) a slip plow making track-on-track passes prior to vineyard planting. (Photo Source: Progressive Viticulture, LLC©)

As it passes through the soil, the slip plow shank shatters the soil, and the ramp mixes the shatter fragments within the channels of tilled soil. The mixing action of the slip plow prevents a claypan from reforming. Slip plowing also permanently disarranges distinct boundary interfaces between subsoil layers, which restrict the downward movement of water and the downward extension of grapevine roots.

Slip plowing, by virtue of some degree of soil mixing and deep placement, enhances the value of applied soil amendments above what is achievable with conventional ripping. At the same time, topsoil materials, which are typically more fertile than subsoils, improve the character of a subsoil during slip plowing.

Slip plowing, however, is to be avoided for soils with saline subsoils or subsoils rich in potentially toxic elements, such as chloride or boron. Slip plowing deposits substantial quantities of these materials in the upper part of the future root zone, which increases the risk of harm to young grapevines. Under these circumstances, deep ripping in the direction of the vine rows and slip plowing at a forty-five-degree angle to the vine rows is sometimes a workable compromise. Such soil preparation limits salinity and potentially toxic elements near the vines while simultaneously creating claypan-free drainage channels near them.

Although uncommon, small-scale slip plows have been successfully used in established vineyards. An example involves a vineyard with silty loam topsoil in the Sloughhouse American Viticultural Area (AVA). A distinct interface boundary separated the thirty-inch deep topsoil from the underlying sand subsoil. All roots were confined to the topsoil and as typically occurs in these situations, some roots grew laterally across the bottom of the topsoil layer and across the surface of the interface. Vine size and growth vigor were restricted accordingly. Alternate tractor rows were slip-plowed to a depth of about 4 feet in the autumn. The following year positive vine responses were apparent in the amount and uniformity of canopy development (Figure 4) and in a marked increase (≈ 50%) in fruit production, which further increased the year after. 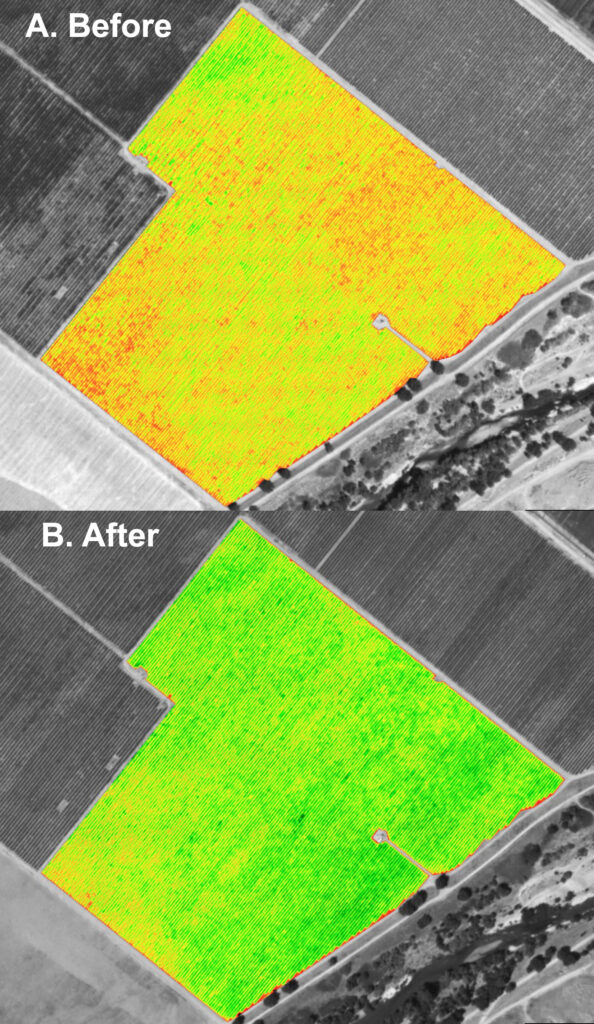 The Vibrosoiler by Soilworks has a parabolic shank similar to some subsoilers, but it is otherwise a unique deep tillage implement. Its most distinctive features are wings attached to the bottom of a long shank and hydraulics that rapidly drive the wings a short distance up and down in a vibrating motion. This technology produces a wider zone of loosened soil than is achievable with ripping and slip plowing. As a consequence, it is used solely in the future vine rows of vineyards in development without cross tillage. For established vineyards, a smaller, double-shank version of the Vibrosoiler (the Schmeiser Mid-Row Ripper) is available.

Deep moldboard plowing (4 to 6 feet) is another technique for mixing soil layers. It is, however, rarely used due to high operational costs and perhaps more importantly, its thorough mixing action that disrupts, disperses, and dilutes topsoil tilth and fertility throughout the root zone. In a few instances, trenching and excavating have been used to disrupt restrictive subsoil features and mix soil layers in and around vineyards.

Deep tillage is a key practice for creating and maintaining permeable, well-aerated, and well-drained vineyard root zones. Used in combination with prudent organic matter, mineral nutrients, and water management practices, deep tillage promotes grapevine health, vineyard uniformity, and sustained economic viability. For any given vineyard, the appropriate type and frequency of deep tillage depend on root zone characteristics and past management.

A version of this article was originally published in the Mid Valley Agricultural Services June 2012 newsletter and was updated for this blog post.

Saayman, D, and Van Huyssteen, L. Soil preparation studies: I. The effect of depth and method of soil preparation and of organic material on the performance of V. vinifera (var. Chenin blanc) on Hutton/Sterkspruit soil. South African Journal of Enology and Viticulture. 1: 107-121. 1980.