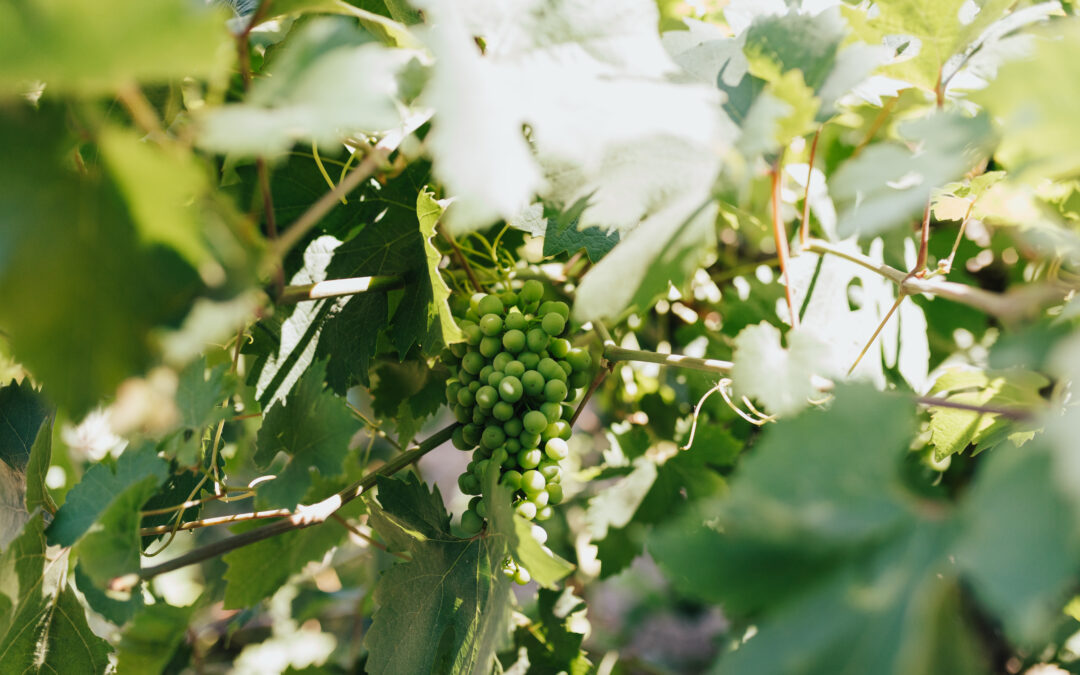 The old saying, a picture is worth a thousand words, certainly applies to damaged grapevine foliage. Still, describing foliage damage with words is often necessary for vineyard managers to communicate with crop advisors and others about the condition of their vines. In this article, we will examine some principles for identifying visible mineral nutrient problems and terms to aid us in describing the associated damage.

Early and mild symptoms of deficiencies of some macronutrients, such as nitrogen and phosphorus, and excesses, such as sodium and chloride, appear as slow shoot growth and reduced canopy development. Frequently, these early and mild symptoms are subtle and go unnoticed. As deficiencies and toxicities become more severe, distinct symptoms develop that are readily perceived. These symptoms are the result of disrupted metabolism, which of course, compromises vine health and productivity. 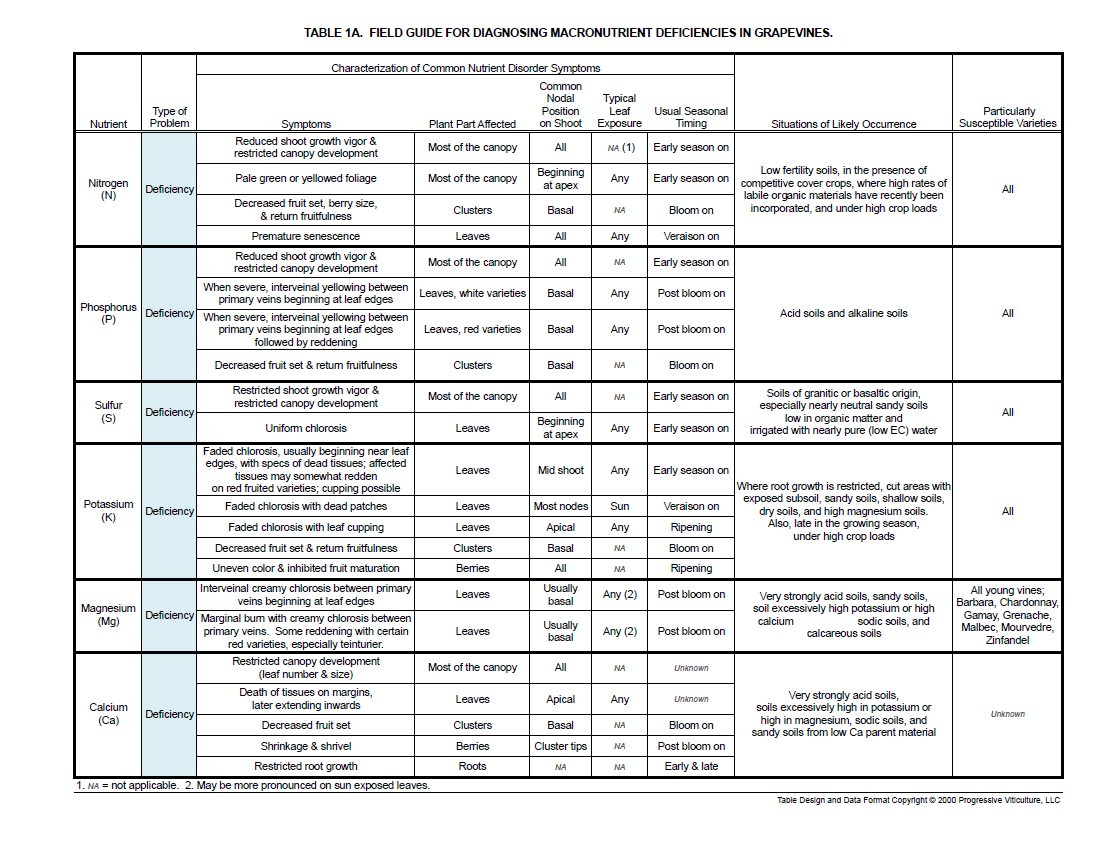 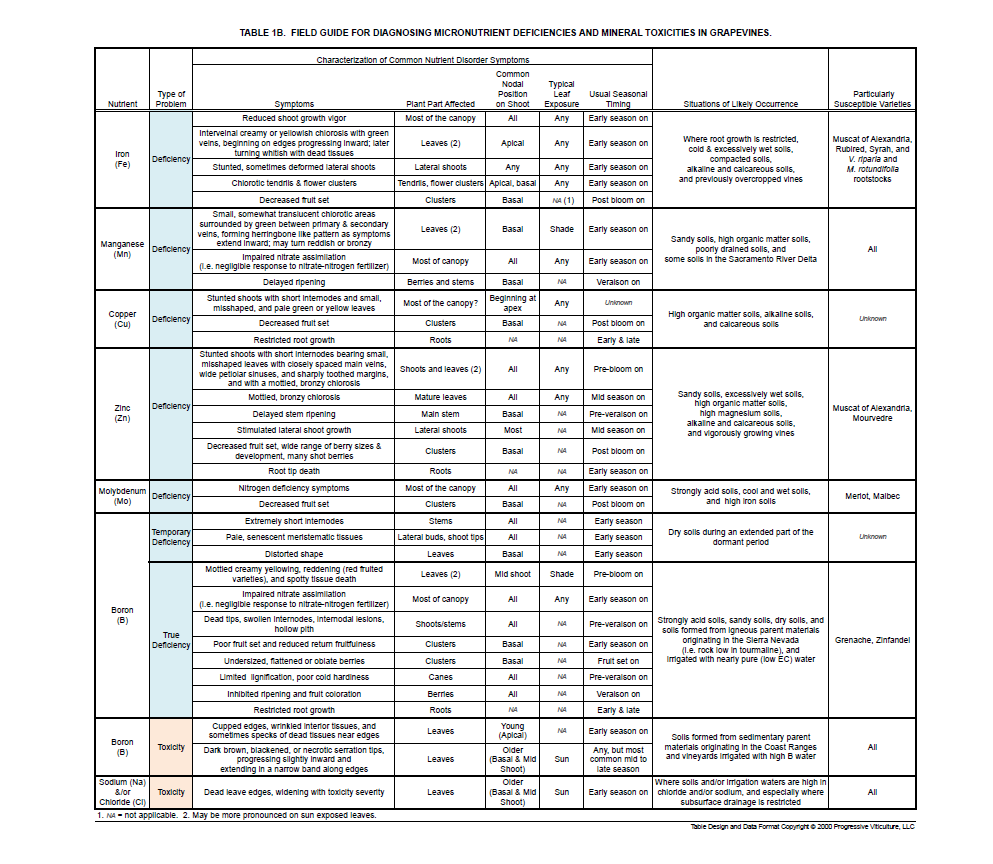 Three main factors characterize deficiency and toxicity symptoms: timing of appearance, the position of damaged organs on shoots, and the type, pattern, and on leaves, the color of the damage (Tables 1A and 1B). The particular combination of these factors reflects the function of the mineral element within grapevines and how readily it moves from older to younger shoot tissues, that is its internal mobility.

Deficiency symptoms of some nutrients, such as nitrogen and iron, can appear at any time during the growing season. Others appear during periods of high demand in developing foliar tissues for a nutrient in short supply, such as ripening period demand for potassium in berries. Symptoms of mineral toxicities usually become apparent midseason, after soil moisture from winter rains is depleted and potentially toxic minerals become concentrated in the soil solution and in plant tissues. 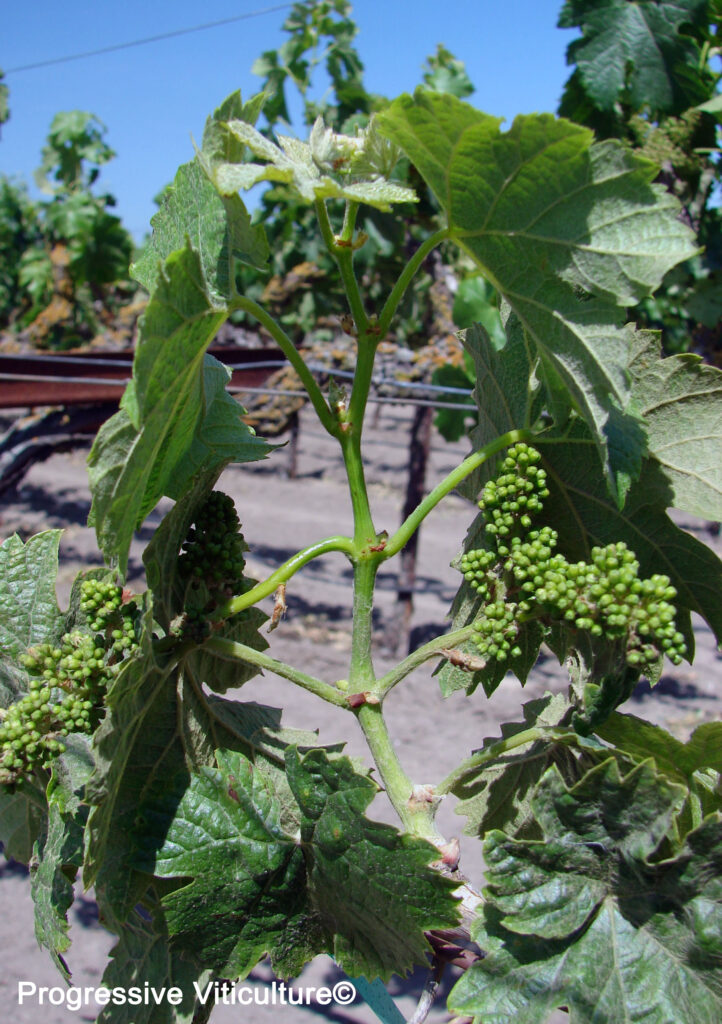 Figure 1. A stunted, compressed Petite Sirah shoot with a pale tip and pale lateral buds due to the temporary early-season boron deficiency is known as the Barnes Effect. (Photo source: Progressive Viticulture©)

Prior to bloom, foliar symptoms of zinc deficiency sometimes appear, especially for vineyards on sandy soils derived from mineral materials washed out of the Sierra Nevada. Early season symptoms of potassium and boron deficiency can also occur in vineyards, but these are normally transient and correspond to brief periods of restricted nutrient uptake from soils. Temporary early-season boron deficiency symptoms, also known as the Barnes Effect, are very distinct, with extremely stunted shoots that have very small leaves, very short internodes, and pale buds and tips (Figure 1).

Deficiency symptoms for several mineral nutrients become apparent after bloom. These include leaf damage from phosphorus, potassium, and magnesium deficiency. During the same period, poor or altered fruit set from phosphorus, zinc, boron, molybdenum, and other deficiencies can materialize.

Position of Leaf Symptoms on Shoots

Phosphorus, magnesium, and manganese deficiencies induce symptoms on older vine leaves near the base of shoots (i.e. basal leaves). In contrast, iron and zinc, which have limited mobility in grapevine shoots, normally cause deficiency symptoms in young, apical shoot tissues. Some nutrients, which commonly become deficient during the middle of the season, tend to develop symptoms on older leaves a few nodes above the shoot base and nearer the middle of the shoot. These include potassium and boron.

Most mineral nutrient deficiencies induce a specific coloring of leaf tissues and sometimes when deficiencies are severe, the coloring is associated with certain patterns of dead (necrotic) tissues. The most common type of coloring is yellowing (chlorosis). Fortunately, there are important telltale differences among the types of leaf chlorosis due to particular deficiencies. Some of these differences are the result of the specific physiological impact of the deficiency, such as inhibited chlorophyll synthesis or starch accumulation in leaves.

Although symptoms start on older leaves, nitrogen deficiency commonly goes unnoticed until most of the foliage on affected vines appears uniformly pale or chlorotic (Figure 2). Presumably, sulfur and molybdenum deficiencies have similar effects on grapevine canopies, but they have yet to be documented in California.

Potassium deficiency causes leaf tissues between main (primary and secondary) veins on mid-shoot leaves to fade from green to yellow, frequently beginning on the outer edges (margins) of the leaves (Figure 3A). As the severity of potassium deficiency worsens, so does the intensity of the faded appearance. In the most severe cases, the faded chlorosis extends across most of the leaf, and specks of chlorotic tissue die (Figure 3B).

Late in the growing season, when crop loads are high or the potassium supply is very low, leaves at the apical ends of shoots assume the typical faded chlorosis, as highly mobile potassium is drawn away from them towards berries (Figure 3C). At the same time, the edges of chlorotic apical leaves may cup downwards.

Two types of deficiencies cause leaves to develop creamy or whitish chlorosis. Iron deficiency causes tissues between veins on leaves at the apical ends of shoots to initially turn yellow and later, creamy (Figures 4A and 4B).  In severe cases, patches on some chlorotic iron-deficient leaf tissues die (Figure 4C). 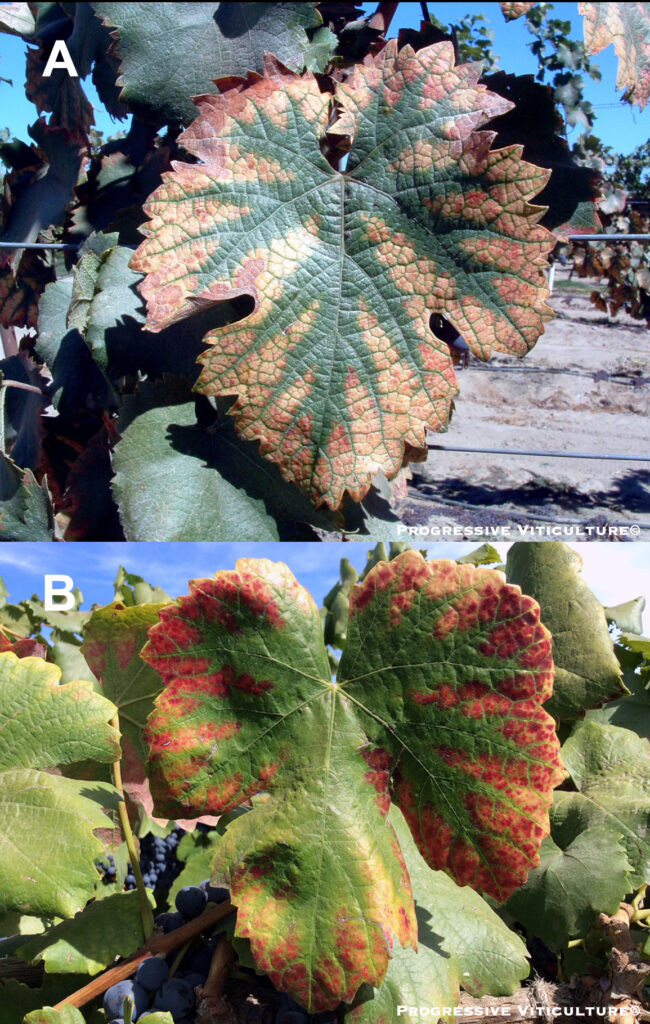 Figure 5. Severe leaf symptoms of magnesium deficiency in Mourvedre (A) and in the teinturier variety Alicante Bouschet (B). (Photo source: Progressive Viticulture©)

Magnesium deficiency symptoms begin as a nearly solid creamy chlorosis on the margins of basal leaves. As the deficiency becomes more severe, the chlorosis extends inward between secondary veins in broad points (dentiform) and leaf margins die (Figure 5). Chlorotic areas on magnesium-deficient leaves of some red-fruited varieties may redden. 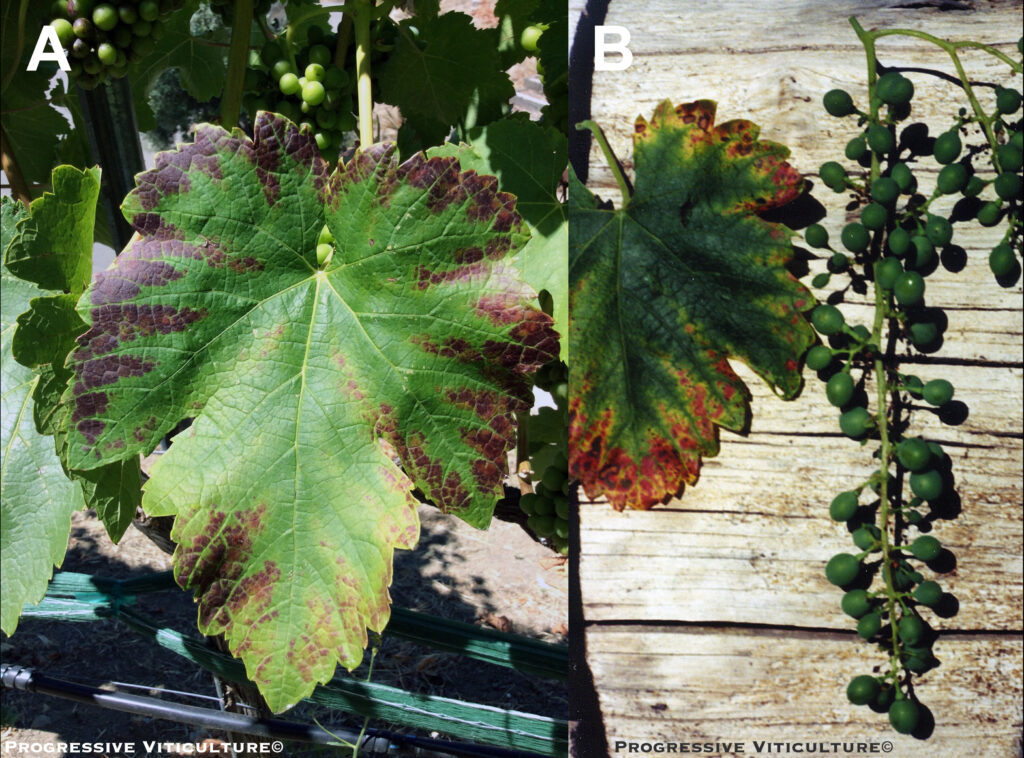 Figure 6. Leaf symptoms (A) and leaf and fruit symptoms (B) of phosphorus deficiency in Syrah. (Photo source: Progressive Viticulture©) 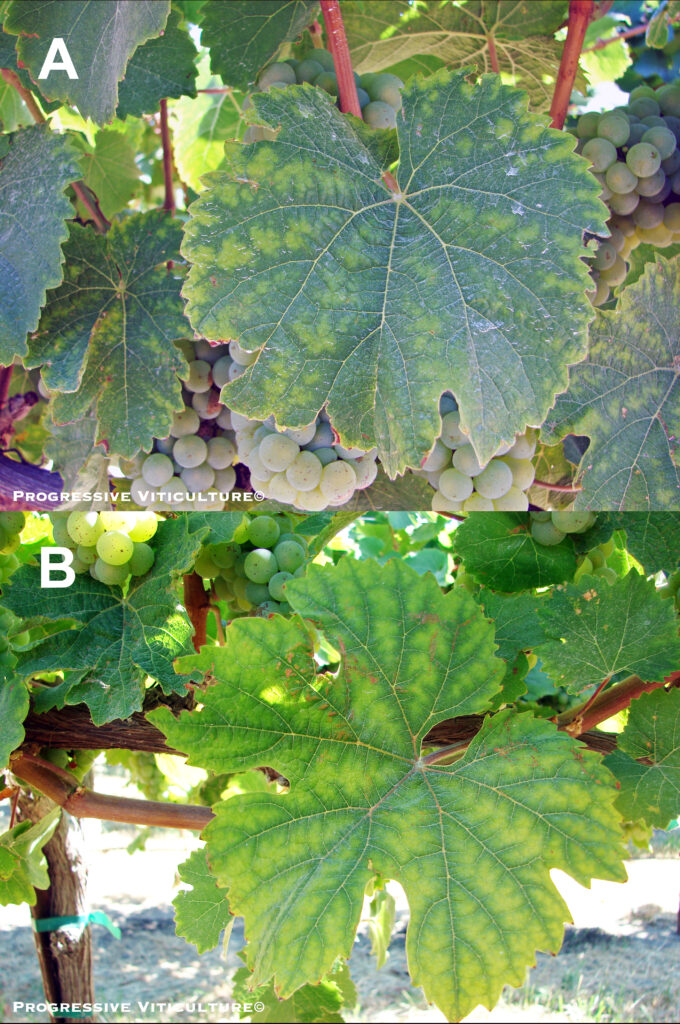 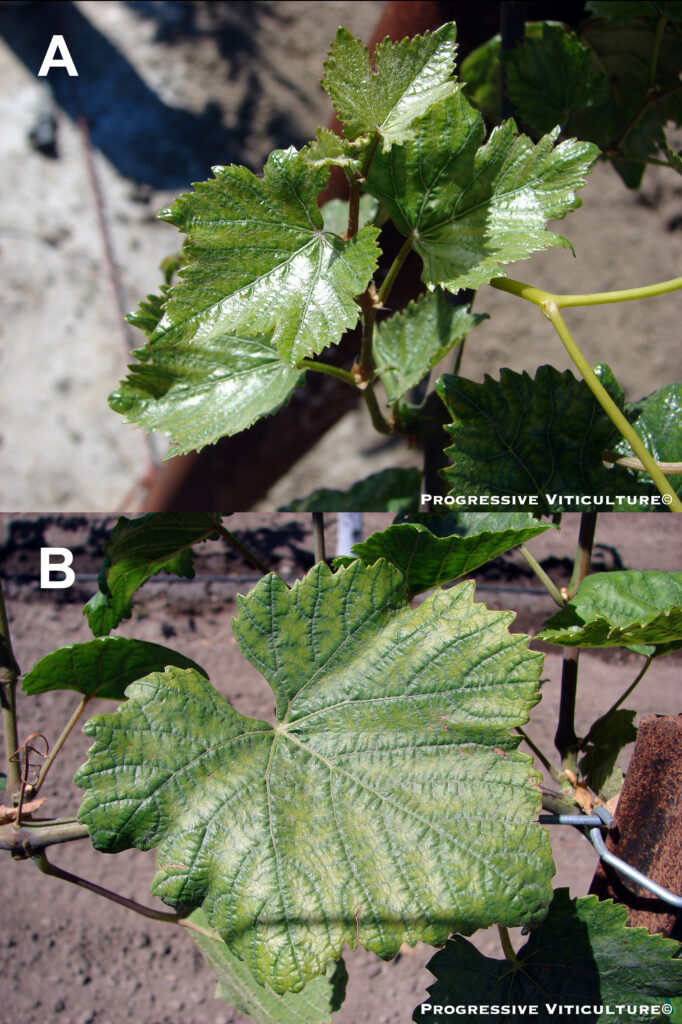 Figure 8. Zinc deficiency in Pinot noir: stunted growth and deformed, mottled leaves on the apical end of a shoot (A), and bronzy mottling on a mature leaf (B). (Photo source: Progressive Viticulture©)

Zinc deficiency symptoms appear as broad mottles between the veins. Such symptoms are most common on young, unusually small, and deformed leaves on the apical ends of shoots, but they may also develop on older leaves (Figure 8). 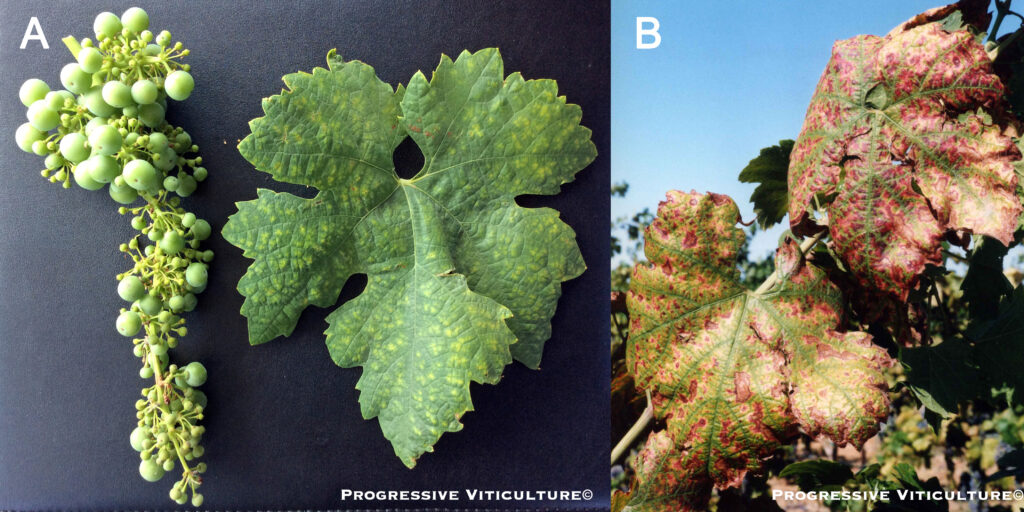 Boron deficiency symptoms initially appear as a mottled faded chlorosis on interveinal tissues of older leaves, but the mottles rapidly become distinctly creamy yellow (Figure 9A) and on red-fruited varieties, may include a red center. In severe cases, the mottles coalesce and some chlorotic tissues die (Figure 9B). On some varieties (e.g. Barbera), shoot tips on severe boron deficient vines die.

Some deficiencies impair the expansion of foliar tissues, resulting in stunted shoots with short internodes and small leaves. The temporary boron deficiency mentioned above is one example (Figure 1). Zinc deficiency is another (Figure 8A). Copper deficiency may have similar effects, but it remains to be observed in California.

As mentioned above, deficiencies of phosphorus, zinc, boron, and molybdenum affect fruit as well as leaves. Importantly, deficiencies of these are apparent as poor fruit set and straggly clusters (Figure 6B). With zinc deficiency, some berries set, but fail to develop normally resulting in a range of berry sizes, some of which remain green. Boron deficient clusters may produce small, pumpkin-shaped (oblate) berries (Figure 9A). Severe iron deficiencies can also lessen fruit set, as well as calcium and copper deficiencies. Iron effects on fruit set, however, are limited in occurrence, and calcium and copper effects have not been documented in California.

Extreme concentrations of any mineral nutrient will have negative effects on grapevines and with excessive micronutrients, there is a high risk of toxicity. Fortunately, for most minerals such circumstances are rare. There are, however, a few important exceptions. These include chloride, sodium, and boron.

The development of chloride and sodium toxicities is typical of soluble and mobile minerals present in excess in soils. They readily move upwards through transpiring grapevines and go as far as they can within shoots. Their final destinations are the margins of leaves. There they accumulate and after reaching toxic levels, tissues die (Figure 10). Because both mineral toxicities follow this pattern, the actual mineral causing toxicity (sodium and/or chloride) is only discernable through lab analysis. 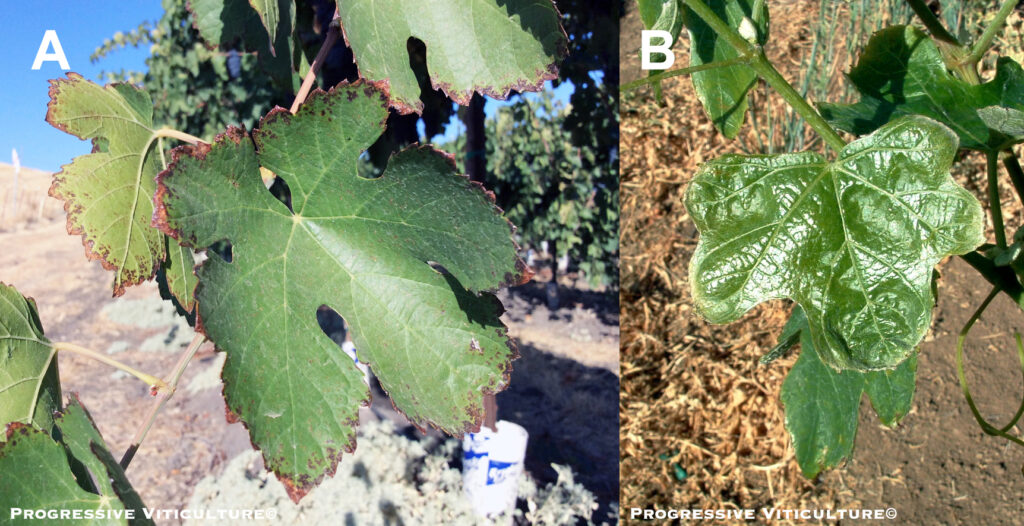 Boron follows a somewhat different sequence in toxicity development. Symptoms first appear as a narrow band of dark red spots on the margins of mature leaves that later coalesce and die as toxicity intensifies (Figure 11A). Boron toxicity may also affect young leaves, causing them to cup as they continue to grow after the edges die (Figure 11B).

Whether a deficiency or toxicity, discerning when, where, and how foliar symptoms appear is the key to identifying the mineral involved. To describe them, consider the type, pattern, color, and location of foliar tissue damage. To confirm them, collect leaf blades and submit them for laboratory analysis. To minimize their negative effects on vine health, disease and stress susceptibility, fruit yields, grape quality, and vineyard profitability, correct them as soon as possible.

A version of this article was originally published in the Mid Valley Agricultural Services October 2009 newsletter and was updated for this blog post.

Christensen, LP, Kasimatis, AN, and Jensen, FL. Grapevine nutrition and fertilization in the San Joaquin Valley. University of California Division of Agricultural Sciences. 1978.