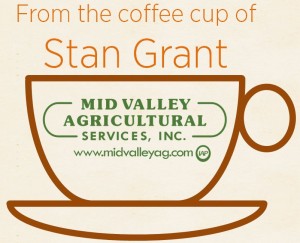 We wine grape growers invest great efforts in managing canopies, crops, and other vineyard attributes above ground.  In comparison, our efforts below ground are often nominal.  And yet, the vineyard below ground is essential to the success and long-term viability of our vineyard businesses.  In the vineyard soil lies about 16% to 27% of vine biomass, depending on time of year, and about 43% of stored carbohydrate reserves. And it is from the soil that vines take in virtually all of the water required for photosynthesis and growth, as well as nearly all mineral nutrients required for normal vine functioning.  Furthermore, soil characteristics determine the distribution of vine roots and their access to these essential soil resources.

While there are a number of effective ways to assess vineyard root zone conditions, sometimes there is no substitute for the cognitive assurances of visual inspection.  After all, seeing is believing.  What we are looking for are soil properties that affect vine growth and function.  These include the number of soil layers and their texture, structure, density, and at times, their relative moisture content.  While not directly affecting grapevines, color is property useful for delineating soil layers.  Rusty spots or streaks (mottling) may be exceptions, as they indicate periods of prolonged soil saturation.  The distribution, density, and apparent health of vine roots often reflect a soils capacity to function as a root zone.  For new vineyards, the roots of the previous ground cover or crop may be equally telling.

Some soil properties are best determined, at least in part, by feel and paramount among these are structure and texture.  Structure refers to the aggregation of soil particles into larger units (or peds).  These may be small or granular, or they may be larger and in various shapes, including platy, blocky, and columnar.  Aggregates that cannot be removed without being destroyed are weak grade, those that can be removed but are fragile are moderate grade, and those that are rigid and durable after removal are strong grade.  Soils layers without structure are either single grain or where single particles adhere in mass, massive.  Structure type, size, and grade influence soil permeability to air, water, and roots.

Soil texture is the relative portions of sand, silt, and clay particles, which are listed here in order of decreasing particle size.  To begin texture determination, wet a handful of soil to field capacity and squeeze it.  If does not form a stable ball, it is sand.  If it forms a weak ball but will not form a ribbon when pressed between your forefinger and thumb, it is loamy sand.  If it forms a stable ribbon, it may be classified as loam, clay loam, or clay for ribbons less than 1 inch, between 1 and 2 inches, or longer than two inches, respectively.  These classifications may be further refined depending on feel, with the sandy descriptor added if the soil feels very gritty and the silty descriptor added if it feels very smooth.  Texture affects soil air, water, tilth, and it is often associated with fertility. 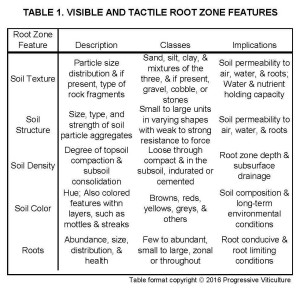 Trenches made with a backhoe are the best means to access a soil profile for inspection.  To facilitate both digging and evaluation, make trenches while the soil is moist, but not saturated.  Dig a trench at least 3-foot wide.  Orient it east to west with a smooth wall for observations on the south side, a ramp for safe entry on one end, and landing about 5 feet deep at the other.  Safely stack excavated soil north of the trench, leaving the south wall unobstructed.  South walls remain uniformly shaded through most days, which benefits both evaluation and photography.  For safety, never enter a trench unaccompanied by an above ground assistant and never enter a trench if in doubt about the stability of its walls.

After entering the pit, use a geo pick, the sharp end of a masons hammer, or the claw end of a framing hammer to lightly scrape the south wall from top to bottom, removing the surface polish from the backhoe bucket and revealing undisturbed soil behind it.  As you do, look for features that delineate soil layers, which were presented above (table 1).

Some soils change very little with depth, making them easy to evaluate.  This is the case for many young soils formed from water or wind deposited materials.  For many of these soils, the surface layer is darker than the soil below due to higher levels of organic matter.  Such soils, when deep, possess no physical restrictions to extending roots.  Examples include Delhi sand, Tokay fine sandy loam, and Valdez silt loam (fig. 1).

In the Sierra Foothills there are soils that are uniform with depth, but they are shallow, overlying fractured rock.  Their capacity to function as vineyard root zones is correspondingly limited.  Auburn silt loam is an example of such a soil (fig. 2).  In the Delta, uniform soils are present, but persistent high water tables limit their functional depths.  In this case, Sacramento clay is an example (fig. 3).

Most soils are not uniform with depth, but possess one or more discernable subsoil layers that may be more or less conducive to grapevine root growth.  Subsoils often contain more clay than topsoils and where clay content is very high, air, water, and roots may be restricted.  In some soils, subsoil layers were severely compacted under pressure or were cemented.  Such hardpans impair drainage and limit root zone size.  Redding gravelly loam is an example of a soil with claypan, hardpan or both (fig. 4).

In other instances, a very distinct boundary between two contrasting subsoil layers may create a barrier to the downward movement of air, water, and roots. Columbia sandy loam, silty substratum has such an interface boundary in its subsoil.

Equipped with essential knowledge about your vineyard soils gleaned from trenches, you can make better management decisions and grow more uniform and consistently productive vineyards.

This article was originally published in the Mid Valley Agricultural Services June 2015 newsletter.