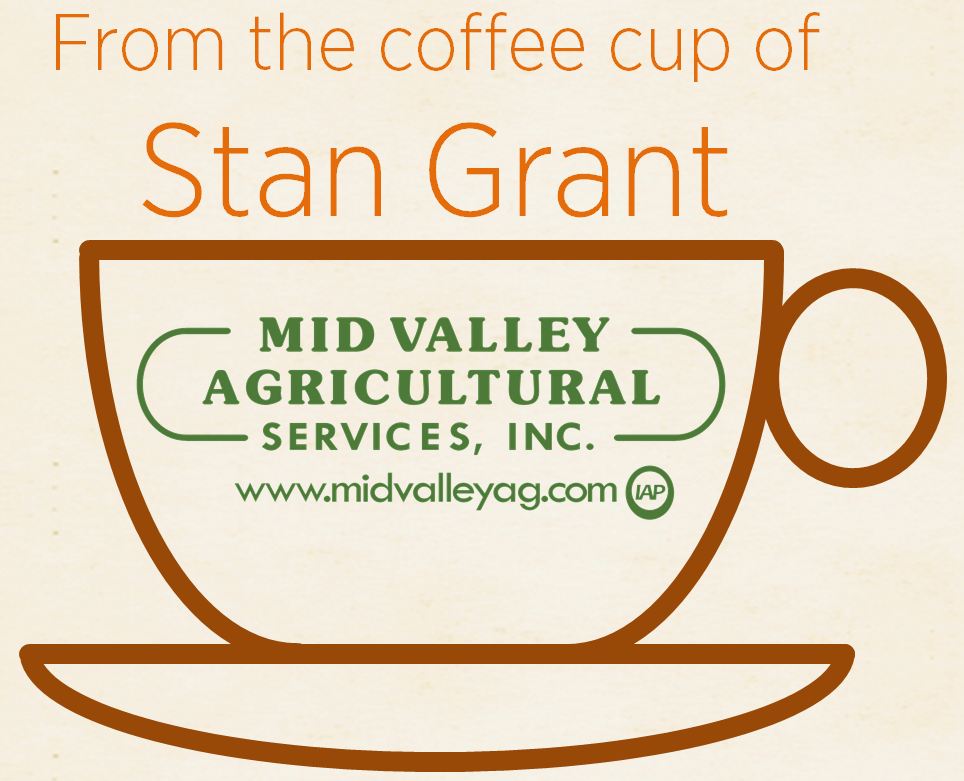 Micronutrients are mineral elements required in small quantities by plants for normal growth and development.  They include iron, manganese, copper, zinc, boron, molybdenum, and chloride.  The micronutrients tend be overshadowed by the macronutrients, especially nitrogen and potassium, in the minds of many of us in the wine grape industry.  In fact, micronutrients are often referred to as “minors”.  With regard to grapevines, however, there is nothing minor about them.  Small fluctuations in their supply in vineyards can have profound consequences for vines (table 1). 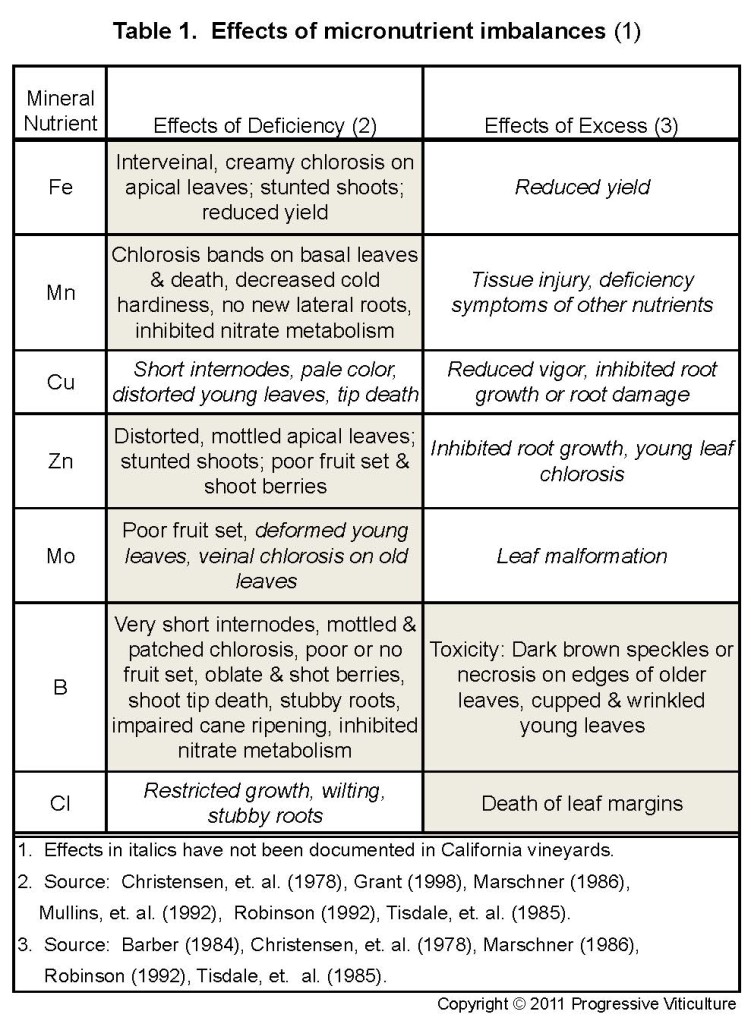 Though their presence is small they are mighty in effect.

In addition to relative quantities, the micronutrients differ from the macronutrients in their functions in grapevines.  With the exception of potassium, most macronutrients have structural functions, either in large molecules or in tissues.  In contrast, micronutrients mainly serve as activators and cofactors for vine metabolism and cell function.  These include roles in basic processes, like photosynthesis, as well roles in secondary metabolism, including the synthesis of pigments (anthocyanins) in the skins of red colored berries and the formation of woody tissues (lignification).  For instance, poor fruit color and winterkill of canes are sometimes associated with boron deficiency.

This article was originally published in the Mid Valley Agricultural Services March 2011 newsletter.

Deficiencies of micronutrients induce foliar symptoms in grapevines that reflect their functions and may include distinct patterns of leaf yellowing (chlorosis), shoot and/or leaf distortion, and poor set and misshapen berries (figures 1-5).

For example, boron deficiency inhibits nitrate uptake and sometimes induces nitrogen deficiency in grapevines.  In some situations, certain micronutrients, such as boron and chloride, may accumulate in leaves to toxic levels, causing damage or death to their edges (margins).

In soils, micronutrients for vine use come mainly from the primary minerals within the mineral matrix.  Organic matter may also be a source of copper, zinc, molybdenum, and boron.  These combined sources normally contain an abundance of micronutrients, with the exception of chloride.  There are no native sources of chloride in soils, but chloride from irrigation water, fertilizers, and air pollution is normally sufficient to meet vine needs.  The relative abundance of sources in the soil, however, is not the end of the micronutrient supply story.

The heringbone pattern of leaf chlorosis due to manganese deficiency in Riesling. (Source: Progressive Viticulture, LLC ©)

As primary minerals weather and organic matter decomposes, micronutrients are released into the soil solution where several possible fates await them.  For vineyard managers, the best possible outcome is uptake by grapevines, a cover crop, or soil microorganisms.  Another favorable outcome is adsorption onto the surfaces of soil particles, where they serve as a reserve supply.  Alternatively, micronutrients may be carried (leached) below the root zone with downward percolating water.  Depending on the soil chemical environment (pH), they may also precipitate in solid compounds or become firmly adsorbed onto surfaces of certain oxide minerals, becoming unavailable to vines.  Due to such reactions, iron, manganese, copper, and zinc are commonly low in strongly alkaline soils and molybdenum is typically low in strongly acid soils.  Root zone environmental conditions that inhibit root growth and function, such as cool temperatures, too little or too much soil moisture, and compaction, also limit a vine’s access to micronutrients and their ability to take them up.

Micronutrients are easy and given the small quantities involved, inexpensive to manage.

Foliar fertilization is highly effective in meeting the very high transient micronutrient demand during bloom and veraison, while fertigation is effective for satisfying non-peak demand.  Several fertilizer formulations are available for iron, manganese, copper, and zinc that vary in cost and effectiveness, including formulations acceptable for organic wine grapes.  While there are fewer options for molybdenum and boron, most formulations are highly efficacious.  Still, where soil boron is very low, multiple fertilizer applications by a number of methods may be required to avoid deficiencies in vines.