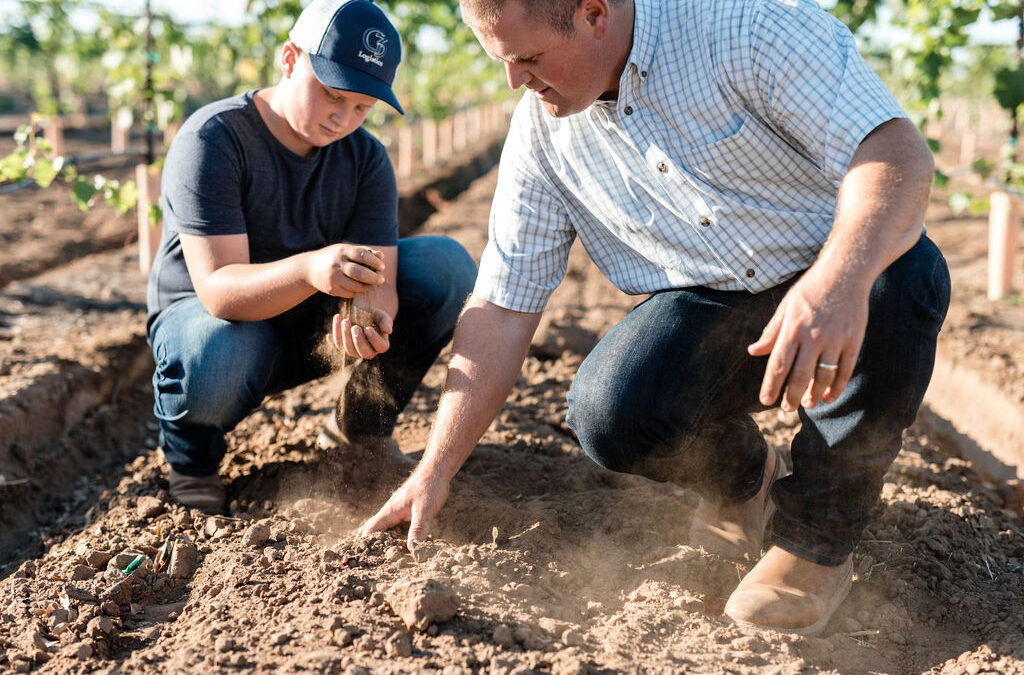 Texture is a fundamental and familiar soil property. Among winegrape growers, it is common knowledge that sandy or lighter textured soils hold less water and consequently, dry more rapidly than clayey or heavier textured soils. Most are also aware that clay soils are more difficult to cultivate, being workable over a narrower range of moisture and requiring greater energy than sandy soils. Further, most growers know soil texture is roughly discernable by feel (Table 1). There are, however, other aspects of texture that are important to winegrape vineyard management. These are the topics of this article. 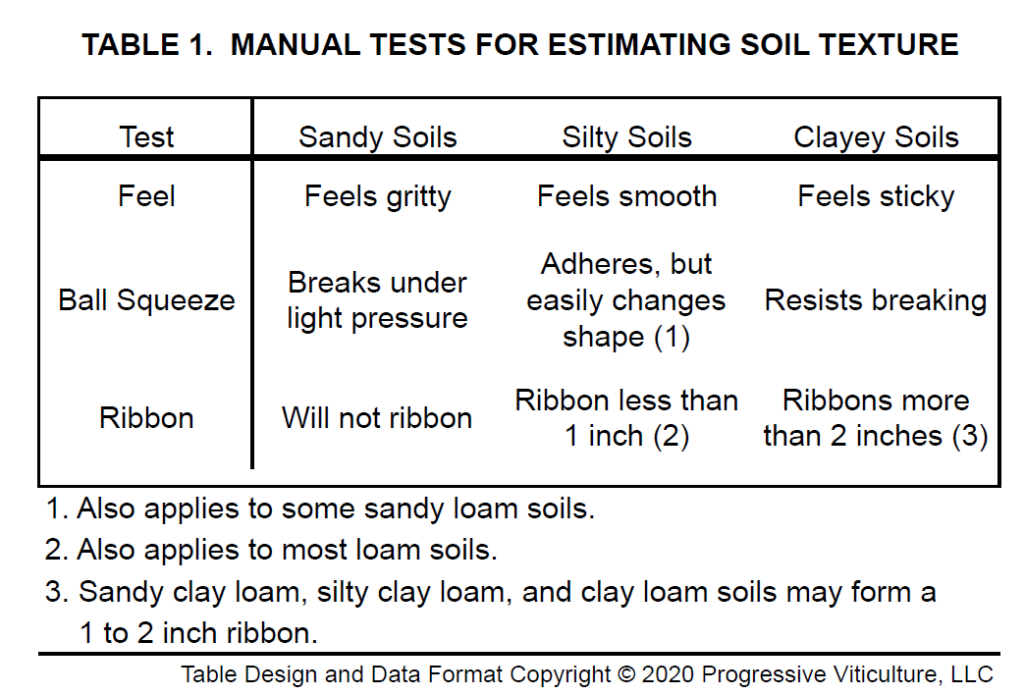 At the most basic level, soil texture is a matter of particle size. More specifically, it is the relative amounts of sand, silt, and clay particles, which are listed here in order of decreasing size (0.05 to 2.0 mm, 0.002 mm to 0.05 mm, and < 0.002 mm diameter, respectively). As particle size decreases, the surface area per unit of soil (weight or volume) increases and so do intensity properties such as moisture and nutrient holding capacities (Table 2). For example, available moisture-holding capacity at field capacity for sand is less than 10%, for silt is 20% to 30%, and for clay is 30% to 60%. 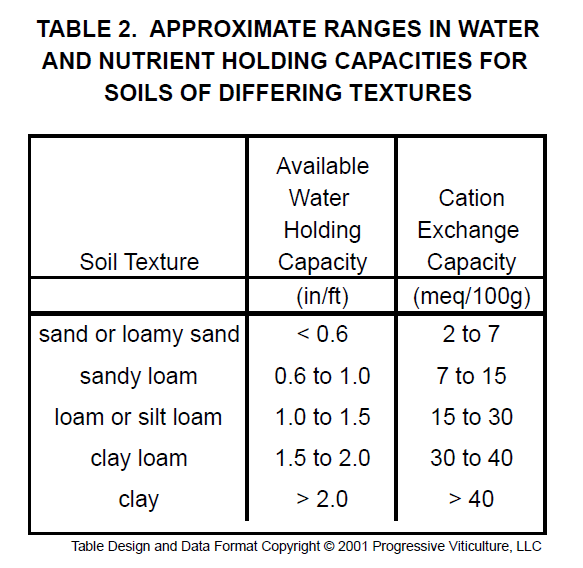 The Nature of Soil Particles

The soil texture story, as it turns out, is more complicated than particle size alone. Sand particles are composed mainly of quartz, which is resistant to weathering and almost chemically inert. Silt particles resemble sand particles but are slightly more reactive due to their smaller size and mineral coatings. In fact, the fixation capacity of specific (vermiculite) silt-sized particles limits the supply of available potassium in some California vineyard soils.

Many types of clay particles possess properties that far exceed those associated strictly with particle size. These additional properties are largely due to the origin of the clay particles. Sand and silt particles form as rocks weather and decompose. A few clay minerals originate in the same way, but most, called secondary clay minerals, form as decomposed mineral materials reprecipitate within soils.

Secondary clay minerals have structures composed of sheet-like layers that provide them with a high specific surface area (area/mass). In fact, clay minerals provide the majority of surface area in many soils due to this attribute, substantially increasing reactivity and moisture-holding capacity. The intensity of these attributes, which vary with clay mineral type and quantity, can be a defining characteristic of soil texture, at least from a practical point of view.

The layers of some clay minerals (smectites) separate when wetted, further increasing their exposed surface area and hydration capacity. Such clay swelling can lead to noticeable expansion of clay soils and when dry, the same soils shrink and deeply crack (Figure 1). Soil cracks disrupt the flow of water and mineral nutrients towards grapevine roots. In severe cases, soil cracking severs roots and destabilizes trellis systems. 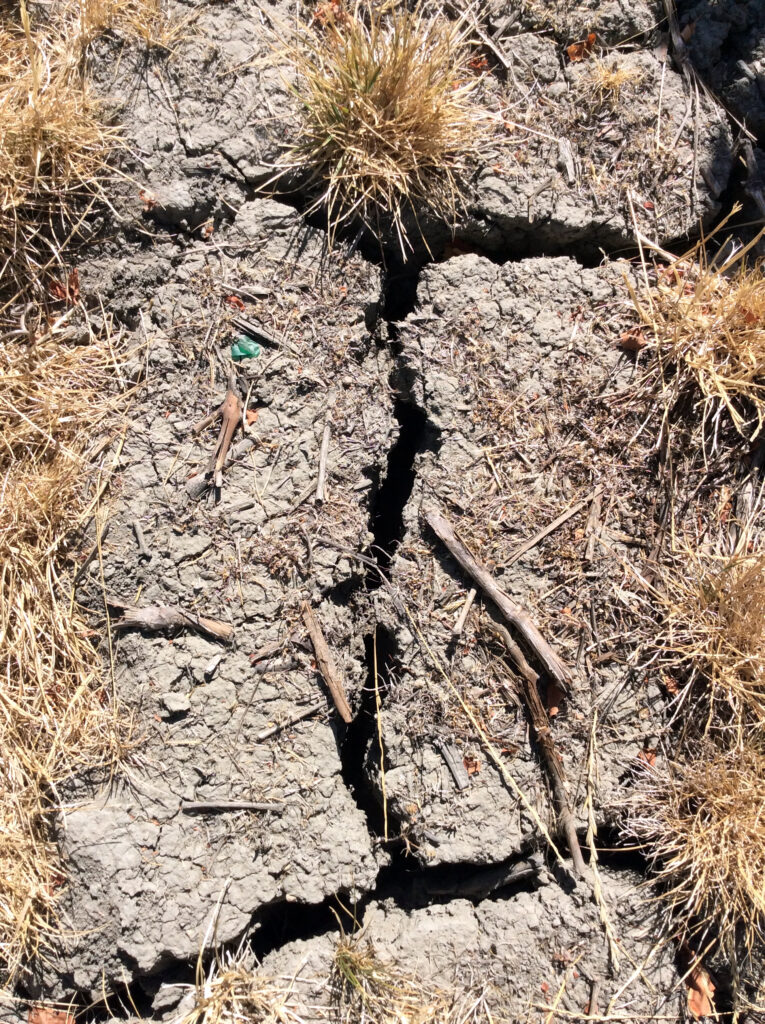 Negative surface charge is another important property of clay minerals. This charge draws positively charged minerals from the soil solution to clay mineral surfaces. In effect, clay minerals function as cathodes. In most soils, the principal positively charged ions, or cations, are potassium, magnesium, calcium, and sodium. Cations such as these, when adsorbed on clay particle surfaces form an ion swarm, which inadvertently includes a small quantity of negatively charged ions (anions) like phosphate and sulfate. Under most conditions, the quantity of cations loosely adsorbed and held in reserve on soil particle surfaces is much greater than the quantity in the soil solution, the source of most cations taken up by vine roots.

The easiest, most forgiving soils to manage are usually those with a near equal mixture of the three particle sizes. Such soils are often referred to as medium textured soils (Figure 2). They include loam, fine sandy loam, sandy clay loam, and silty clay loam soils. Other soils, in which one of the three particle sizes is prominent, are typically more difficult to manage. Each of these is discussed below. 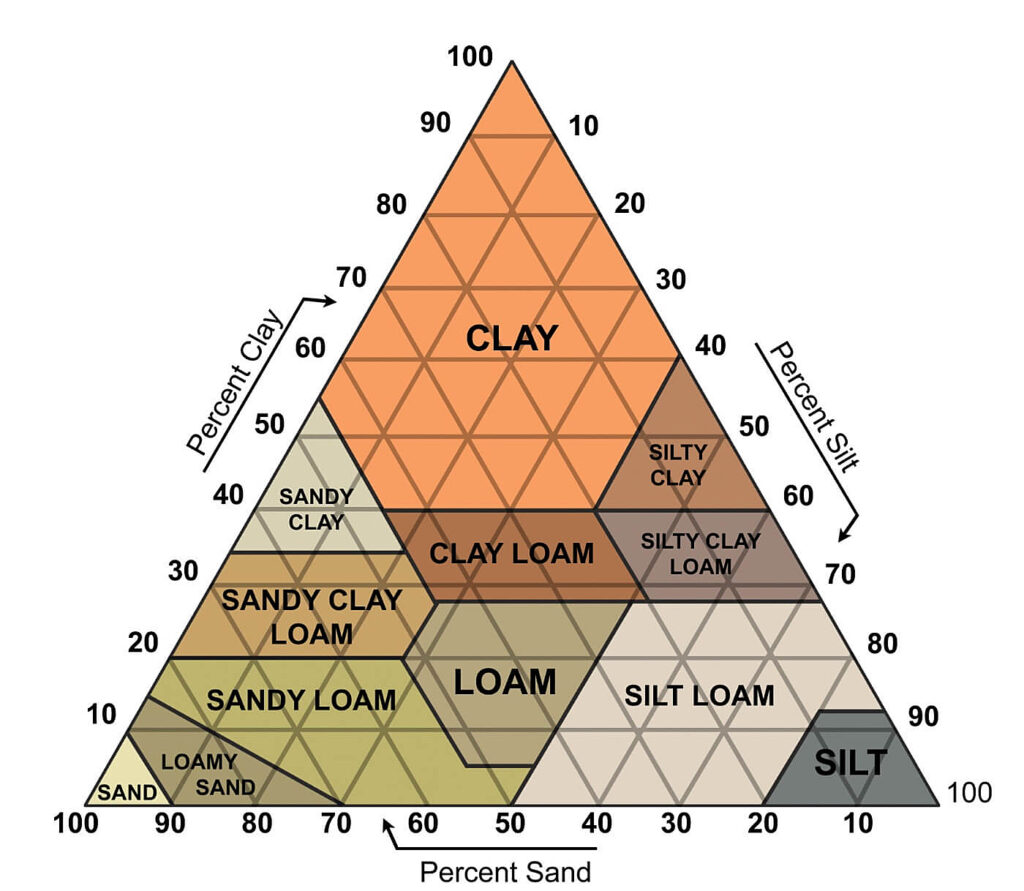 Due to their low capacities to hold water and mineral nutrients, very sandy soils require frequent, low rate irrigations and fertigations to efficiently maintain consistent supplies to meet grapevine needs. Importantly, very sandy soils should not be cultivated when wet because sand particles are commonly angular and when compacted, lock tightly together. Examples of very sandy soils (more than 70% sand) in the Northern Interior of California include Delhi sand, Tinnin loamy coarse sand, and Tujunga loamy sand.

Below are ten clay soil management challenges and suggestions for dealing with them.

2. Water moves slowly into and through the small, tortuous pores of clay soils, requiring correspondingly slow water applications and carefully timed irrigations to ensure acceptable irrigation efficiency and a fairly continuous and moderate supply of soil moisture for grapevines.

4. It takes more water to wet a clay soil to field capacity than is needed for other soils. At the same time, due to a phenomenon called hysteresis, water is not released from most clay minerals as readily as it is absorbed. Therefore, irrigations may be required for clay soils while they visibly appear moist. Due to this combination of characteristics, clay soils commonly require more frequent irrigations and sometimes, greater quantities of applied water than medium texture soils.

5. In the spring, clay soils are slow to warm and slow to drain, which impedes grapevine root activities, fosters pale foliage and restricts canopy development. Planting on berms reduces these effects (Figure 3).

6. Clay soils are workable over a narrow range of soil moisture and are highly susceptible to compaction. Consequently, cultivations must be carefully timed and executed.

8. Some clay soils do not release certain mineral nutrients, such as potassium, as readily as they adsorb them, creating a greater and more frequent need for fertilization than can be predicted from the results of standard soil analysis.

9. During ripening under deficit irrigation schedules and especially, during periods of high maximum temperatures and abundant ultraviolet radiation, there is a high risk of potassium deficiency-induced leaf damage for vines on clay soils due to two factors. They are low levels of readily available (soluble) potassium and potassium movement is restricted within the thin films of water adhering to soil particles along the tortuous paths of narrow pores. To limit such damage, regularly irrigate, keeping vines on the wetter side of moderate water stress (midday leaf water potential of -10 to -11 bars), and regularly fertigate, applying low rates of highly soluble potassium fertilizer, such as 0-0-30 or KTS.

10. Due to their high buffering capacities, many clay soils require large volumes of soil amendments to effect chemical changes, such as changes in pH. In some instances, drip irrigation applied soil amendments are more cost-effective than broadcast or band applications. 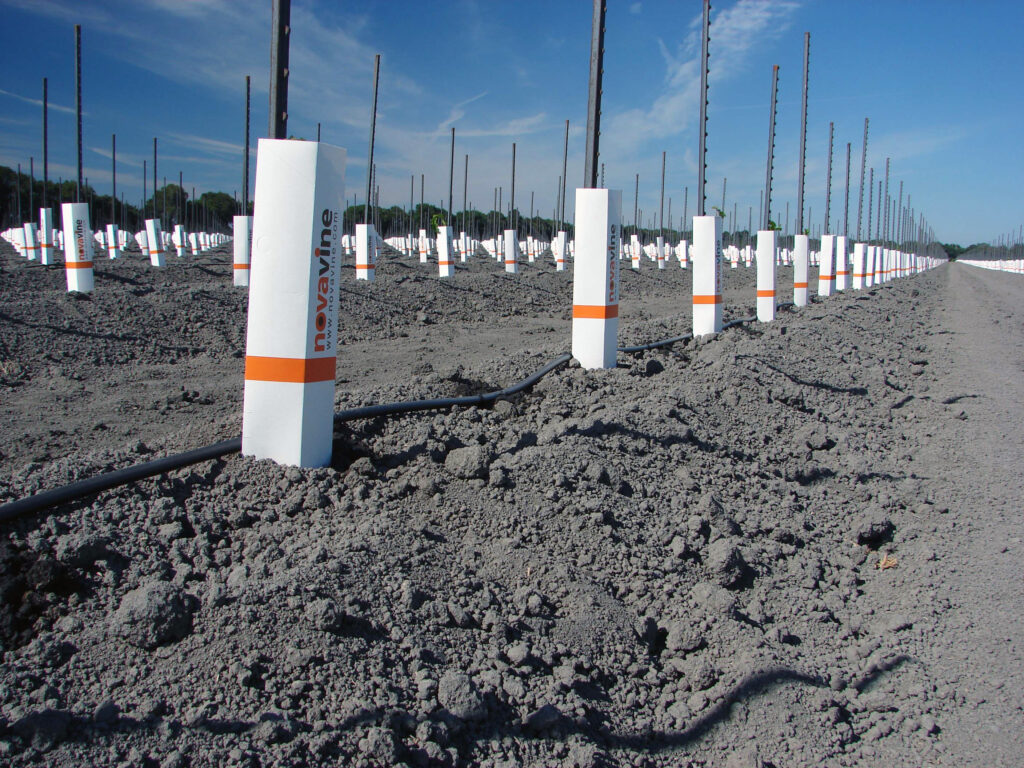 A version of this article was originally published in the Mid Valley Agricultural Services May 2006 newsletter and was updated for this blog post.