It is a fact: chemistry is fundamental to life. It is also a primary means to directly influence grapevines, especially their mineral nutrition. Thankfully, our modern mineral nutrient toolbox includes a wide array of chemical tools for this purpose. To use them appropriately and effectively, we need to know about their characteristics and their behaviors in vineyards. In this article, we will focus on attributes and functions of common forms of applied nitrogen (N). 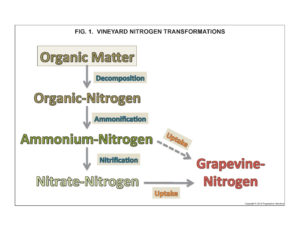 Before beginning, we need a bit of background information about the nature of N in vineyards. Vines acquire almost all N from soils in one of two mineral forms. They are the ions nitrate (NO3-) and ammonium (NH4+).
There are no native sources of mineral-N in soils. Rather, all residual soil N occurs in organic forms contained in organic matter (OM). Mineral-N availability in soils depends on microbes to first decompose OM and release the organic-N it contains and afterwards to transform organic-N into mineral-N (fig. 1). The supply of mineral-N in soils is transient and normally low because most California vineyards soils are low in organic matter and because vines, cover crops, and soil microorganisms rapidly consume available mineral-N.

All nitrate fertilizers are highly soluble and quickly become available for uptake in soil solutions. Soil nitrate is highly mobile and readily flows towards roots as they take up water. Nitrate moves into roots both passively with soil water and actively across cell membranes. After it is inside roots, nitrate easily moves upwards to shoots where it acts fast, darkening foliage, stimulating photosynthesis, and prior to ripening, promoting growth. 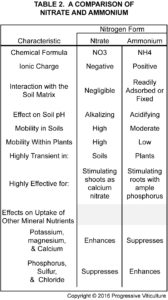 Ammonium fertilizers readily dissolve in water like nitrate fertilizers, but the N they contain is more slowly available for the following reasons. While vine roots directly take up some ammonium, certain bacteria convert most to nitrate before roots absorb it. The ammonium to nitrate conversion usually takes 1 to 2 weeks. Ammonium may also interact with the soil matrix, either being adsorbed onto particle surfaces or fixed between layers of certain clay minerals (table 2, click on table to enlarge).

Actually, ammonium is potentially toxic to grapevine tissues. To protect them, ammonium taken into roots is immediately incorporated into organic compounds (amino acids and amides). Unlike nitrate, after uptake most N from ammonium remains in the roots and benefits them.

Urea (CO(NH2)2) is a third common form of fertilizer N. It is a familiar dry N fertilizer (46-0-0) and part of some liquid fertilizers, including UAN-32. Roots can absorb urea, but most passes through microbe-mediated conversion processes to ammonium and nitrate before uptake. For this reason, urea is slower acting than both nitrate and ammonium, and correspondingly, it has a longer residence time in soils and elicits slower responses in grapevines.

Before the advent of manufactured fertilizers, organic amendments, such as manures and cover crop residues rich in legumes, were important sources of applied N for vineyards. Today, they remain viable options for substantially increasing soil N. However, their low and variable N content and their slow and variable rate of N release make their contributions to vineyard N difficult to predict (table 3). For this reason, they often work best when used in moderate amounts in combination with other N fertilizers. In this role, they supply modest amounts of soil nitrogen for sustaining normal early season vine growth while, at the same time, providing numerous other benefits to vineyards associated with organic matter additions. 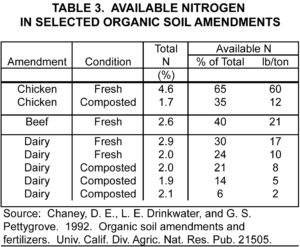 Actually, a combination of applied N forms is better than continued use of a single form for several reasons. First, it facilitates balanced vine nutrition because nitrate enhances the uptake of nutrient cations, like potassium, magnesium, and calcium, while ammonium enhances the uptake of nutrient anions, including phosphorus and sulfur. Second, it provides the greatest growth and development benefits, with nitrate mainly benefiting shoots and ammonium mainly benefiting roots. Third, it promotes soil pH neutrality because the alkalizing effects of nitrate cancel the acidifying effects of ammonium and urea.

Like all farming inputs, N fertilizers have associated risks. Nitrate, being highly mobile, is easily leached below the root zone. It may also be lost to the atmosphere if soils remain saturated for prolonged periods. Ammonium may volatilize as ammonia from warm, wet soil surfaces, as will urea. Urea may also gas off decomposing organic amendments. All forms of N, including organic-N, may be lost with surface runoff and soil erosion. To avoid such losses, apply N at moderate rates timed to satisfy the needs of specific developmental stages, rapidly incorporate it, and avoid over irrigation. Also, slow surface flow and protect your vineyard topsoil from erosion with a cover crop.

To summarize, nitrate, ammonium, and urea are the principal forms of N in fertilizers. They act differently in soils and vines. At the same time, they are complimentary, promoting balanced vine nutrition and soil pH neutrality.