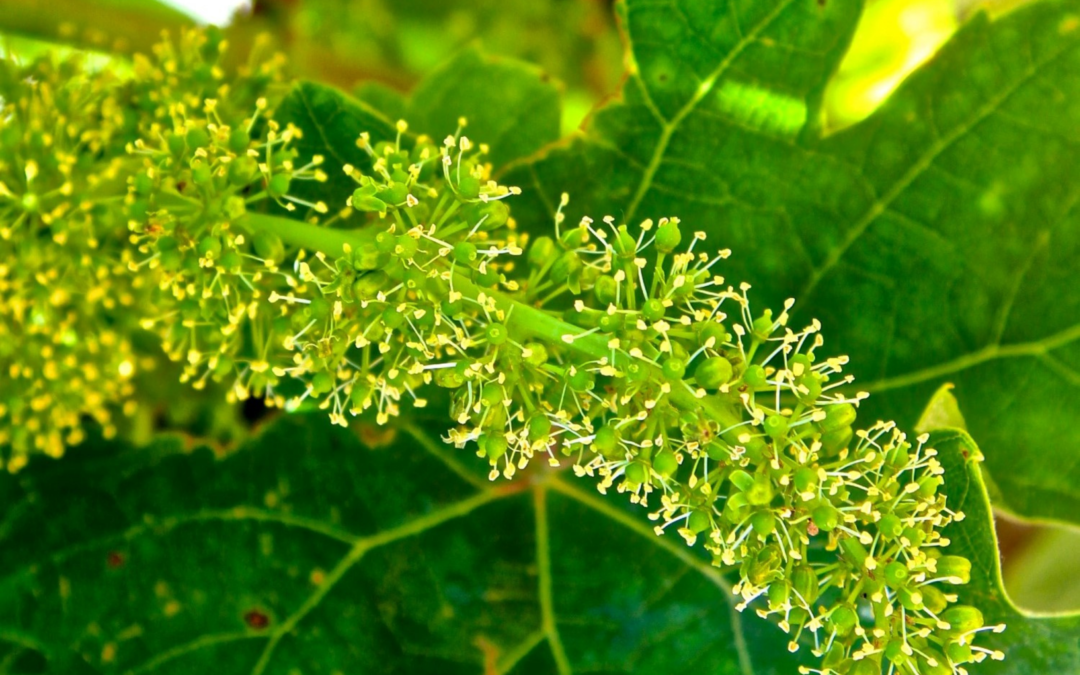 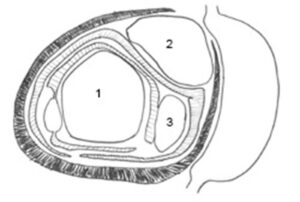 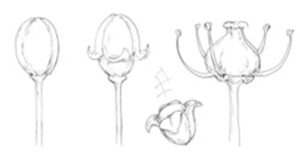 The grape flower does not have conspicuous petals, instead, the petals are fused into a green structure termed the calyptra, but commonly referred to as the cap. The cap encloses the reproductive organs and other tissues within the flower. A flower consists of a single pistil (female organ) and five stamens, each tipped with an anther (male organ). The pistil is roughly conical in shape, with the base disproportionately larger than the top, and the tip (called the stigma) slightly flared. The broad base of the pistil is the ovary, and it consists of two internal compartments, each having two ovules containing an embryo sac with a single egg. The anthers produce many yellow pollen grains, which contain sperm. Wild grapevines, rootstocks (and a few cultivated varieties such as St. Pepin) have either pistillate (female) or staminate male flowers — that is, the entire vine is either male or female. Vines with female, pistillate flowers need nearby vines with staminate or perfect flowers to produce fruit. The majority of commercial grapevine varieties have perfect flowers, that is, both male and female components. 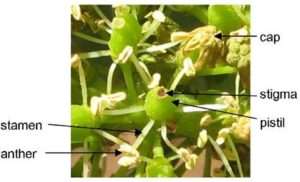 The period of time during which flowers are open (the calyptra has fallen) is called bloom (also flowering or anthesis) and can last from 1 to 3 weeks depending on weather conditions. Viticulturists variously refer to full bloom as the stage at which either approximately 50% or two-thirds of the caps have loosened or fallen from the flowers. Bloom typically occurs between 50 and 80 days after budburst.

When the individual flowers on a grape inflorescence open, it looks different than the bloom of most flowers. The cap separates from the base of the flower, becomes dislodged, and usually falls off, exposing the pistil and anthers. The anthers may release their pollen either before or after cap fall. Pollen grains randomly land upon the stigma of the pistil, allowing pollination. Multiple pollen grains can germinate, each growing a pollen tube down the pistil to the ovary and entering an ovule, where a sperm unites with an egg to form an embryo. The successful union is termed fertilization, and the subsequent growth of berries is called “fruit set.” The berry develops from the tissues of the pistil, primarily the ovary. The ovule together with its enclosed embryo develops into the seed. 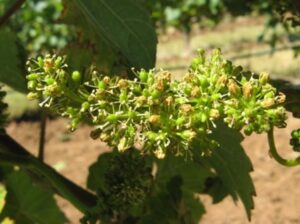 Because there are four ovules per flower, there is a maximum potential of four seeds per berry. Unfavorable environmental conditions during bloom such as cool, rainy weather can reduce fruit set (number of berries) and seeds per berry, thereby affecting berry size. Berry size is related to the number of seeds within the berry, and very few seeds lead to smaller berries. However, berry size can also be influenced by environmental conditions, management practices, and water management. Some immature berries may be retained by a cluster without completing their normal growth and development, a phenomenon known as “coulure” or “hens and chicks” (Mullins et al., 1992).

Originally published at grapes.extension.org on June 20, 2019, and reposted here with permission from the author.

During bloom on May 11, 2022, the Lodi Winegrape Commission hosted an Educational Happy Hour called “Bringing the Vineyard into the Tasting Room.” This event served as an opportunity for local winery and tasting room staff to enhance their knowledge of viticulture by getting information directly from grower leaders. All levels of viticulture and wine knowledge were welcomed and many tasting room staff members from our local wineries were present. Working in small groups, Lodi winegrowers educated tasting room professionals on the topics of fruit set, bloom, parts of the vine, fruit quality, the Lodi AVA, and the Lodi sub-AVAs. We used our Demonstration Vineyard to create an up-close, hands-on experience showcasing the various stages of grapevine flowering in different varieties. For more information on events like this check out our Local Opportunites page. 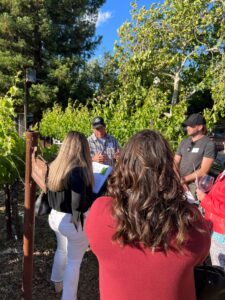 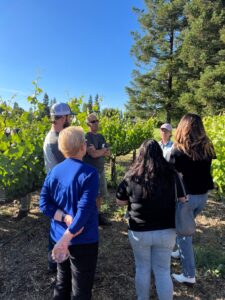