Fruit set is the process in which flowers become fruit and potential fruit size is determined.  It occurs after pollen is released from male flower parts (anthers), lands on receptive female flower parts (stigmas), produces a tube that grows to the ovules, and fertilizes eggs contained in them.  Fertilized eggs form seeds, which induce surrounding (pericarp) tissues to grow and form a berry.  The size of the berry will be closely correlated with the number of seeds that form within it, which may reach a maximum of four.

It is normal for a large portion of flowers (> 50 %) to fail and fall, even under optimum conditions (fig 1).

Unusually high rates of fruit set failure, which markedly decrease yields and economic returns, are an obvious concern for wine grape growers.  Poor fruit set may be the result of grapevine genetics, environmental conditions, and/or cultural practices (fig 2, table 1).  It can take one of two forms: a mixture of normal and undersized berries (millerandage) and a failure to set berries (coulure). 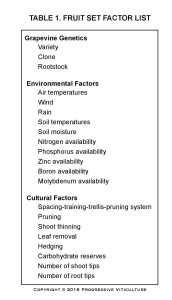 Environmental conditions before, during, and after bloom may have an impact on fruit set.  Warm, dry conditions encourage fruit set, while extremes in temperature and soil moisture diminish it.  Excessive rainfall and high winds are also disruptive.

Hedging or leaf removal before, during, and after bloom may induce poor fruit set.  These canopy management practices reduce photosynthesis and the flow of carbohydrates to the flowers and new fruit.  Defoliation may also reduce the number of flowers developing in buds, effectively reducing next years crop.

An adequate and balanced supply of all mineral nutrients is critical for optimum fruit set.  However, certain mineral nutrients, including phosphorus, boron, zinc, and molybdenum, effect fruit set directly because they have various roles in pollen development, pollen viability, pollen germination, and pollen tube growth (fig 3).

Even when soil and tissue levels appear adequate, the supply of these nutrients coming from the roots is often insufficient to satisfy the high transient demand during bloom.  As a result, clusters usually benefit from supplemental fertilizer nutrients applied to the foliage immediately before or during bloom.

Certain rootstocks, such as St. George and Dogridge, consistently reduce fruit set, while others may enhance set compared to own-rooted vines, including 420A, Schwarzmann, and 1616C.  Certain clones also set fewer berries than others.  For example, Cabernet Sauvignon clone 06 sets less fruit than most other clones because it produces defective pollen.  Some wine grape varieties, regardless of clone, are prone to poor fruit set.  Three of the best-known examples are Merlot, Malbec, and Muscat of Alexandra.  Poor set in Merlot is particularly important to the wine industry because it is major variety, representing about 6.5 % of the 2015 crush.

Possible causes of low fruit set in Merlot include the following.  Merlot produces many lateral shoots and the tips of these shoots are resource sinks that may out compete clusters.  It is also possible that Merlot is unable to translocate sufficient quantities of nutrients from the roots.  Merlot may be prone to accumulations of nitrate in cluster tissues sufficient to disrupt fruit set.

Fruit set has been an active area of research since about 1960 and Mid Valley Agricultural Services joined the effort in 2006 with a Merlot field trial conducted in the Lodi area.  They evaluated both cultural and chemical treatments, including fertilizers and growth stimulants.  They confirmed that lateral removal and shoot tipping improve fruit set.  Both are labor intensive and unlikely to be widely adopted.  We also demonstrated that molybdenum is nearly as effective as the two cultural practices and substantially less expensive.

Currently, the best vineyard management strategy for optimized fruit set involves the following.  After harvest, ensure vines go dormant with moist soil around their roots and maintain moisture in the upper root zone over the winter.  Early in the season, maintain a soil environment that is moist, but not saturated.  Prune near or during budbreak, when the majority of the buds are fully developed and active.  Practice balanced soil fertility management throughout the growing season.  Thin shoots well in advance of bloom to minimize competition and direct resources into the shoots that will be retained.  Immediately prior to or during bloom, apply foliar fertilizers containing phosphorus, boron, zinc, and molybdenum unless the soils are very high in these nutrients.  Finally, if warranted by economics, tip shoots early in the bloom period.

This article was originally published in the Mid Valley Agricultural Services October 2006 newsletter.