‘Tis the Season For Cold

There may be ongoing and needed discussion about whether the climate is changing and who, or what, is causing it. But what we know for sure is that the season has changed from fall to winter, and over the past few weeks we have experienced an “arctic blast”. As I write this it is 45 F at 2:30 in the afternoon!

It has been a while, but I recall that December 1990 was even colder (15˚F, I think). That’s when we saw Eucalyptus killed, along with some young vines down to the graft union and even weeds dealt a severe blow. During that December, most days from mid-month on saw minimum temperatures in the low 20s ˚F and maximums from the high 30s to low 40s ˚F, before sunset.

Since December 4th of this year many morning minimums have been in the mid to upper 20s to upper 30s˚F. Afternoon highs have been more variable from the low 40 to mid-60s ˚F.

Visit www.lodigrowers.com to access the Lodi weather information portal provided by Western Weather Group. Also, did you know that Lodi winegrape growers can subscribe to daily weather forecasts and set up custom weather alerts to be received by text message or email? Contact Matthew Hoffman for more information (matthew@lodiwine.com).

Grapes don’t require many chilling hours (below 45˚F or hours between 32 and 45 ˚F, depending on your method of monitoring). And while dormant, grapes are fairly tolerant of temperatures below 32˚F, but less so below 12 ˚F. This is true at least for most cases in California.

Should we expect vine damage? 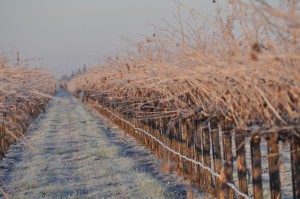 We (or the vines) do have three things going for us:

That said, it was pretty cold the past several mornings and young vines (4th to 5th leaf or less) may have been hurt to some degree, depending on the variety, the rootstock, crop load (if any this year, accidental of otherwise), their vigor, and general shoot hardening. I am optimistic at this point that damage will be slight and scattered. But it would be good to keep in mind some possible tissue damage and delayed, weak or no shoot growth when budbreak arrives.

What should I do? 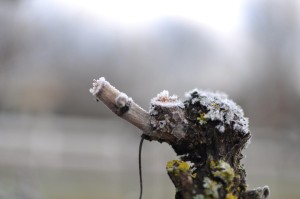 Not much can be done, but if the winter continues to be dry, consider some mid-winter irrigation to mimic rain. If possible, time this irrigation just before a predicted rain to improve the effective wetting of both the water applied and the rain. An added benefit may be better leaching of surface salt accumulation. We don’t have salt problems compared to some other growing regions and we have good quality water, both surface and well, but the vines will “appreciate” any effort.

Consider reading the October 7th 2013 Coffee Shop article on how frost developed in vineyards to gain an understanding of the physics behind key processes such as inversion layers and cold air drainage.

Cold and frost or freeze damage can be variable and hard to predict. As I recall, we do get heat radiation from soil, but cold air tends to be dense, so higher positioned thermometers (or cordons) will be warmer generally. Vineyard sites with a history either of frost or winter injury would be good to watch closely when spring arrives. Those sites, especially young vines, may best be pruned after budbreak to see what is viable and how far back to prune/retrain.

In the meantime Mother Nature will take her course.