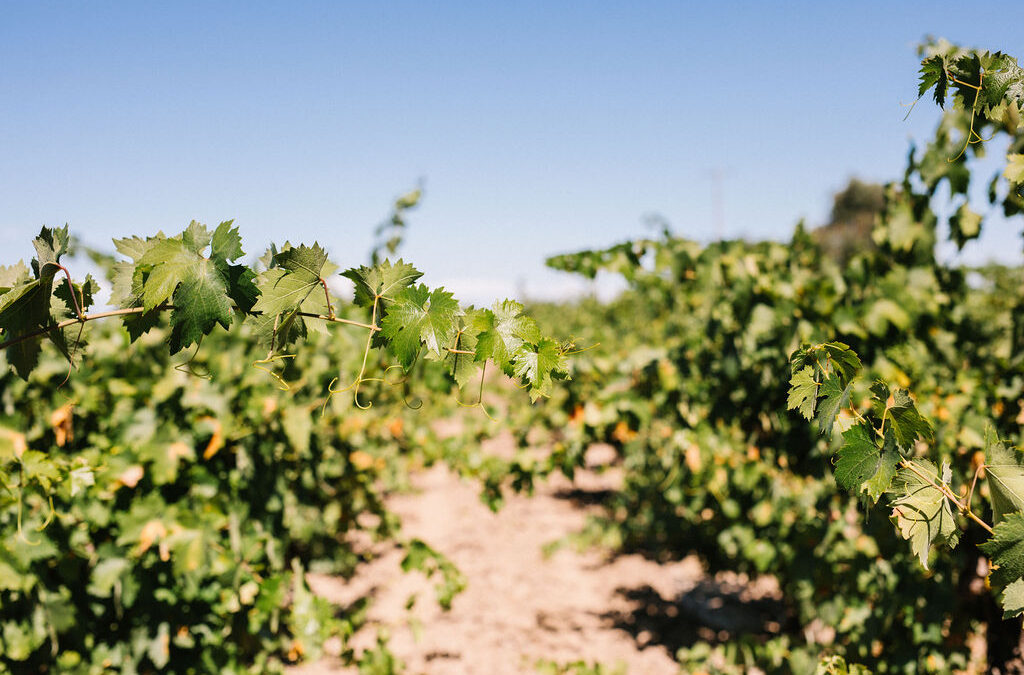 The Lodi wine community has devoted significant attention and energy to implementing sustainable winegrowing practices since the early 1990s. The focus has been on all aspects of vineyard management, from soil quality, nutrient and irrigation management to canopy management, energy efficiency, social equity, and pesticide risk. A great deal of effort has gone into measuring the level of implementation of specific practices, particularly through the Lodi Winegrower’s Workbook self-assessment program and the LODI RULES for Sustainable Winegrowing certification program. However, much less has been done to measure the outcomes of implementing sustainable farming practices, mainly because it is difficult and expensive to carry out such measurements. The California Department of Pesticide Regulation (DPR) publishes annual reports (Pesticide Use Reporting, or PUR) that provide a unique opportunity to review the application of pesticides to Lodi vineyards. 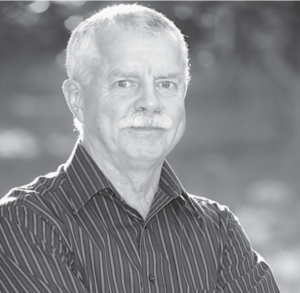 Cliff Ohmart, Ph.D., is the author of View from the Vineyard: A Practical Guide to Sustainable Wine Grape Growing. Previously he served as the Research/IPM Director at the Lodi Winegrape Commission. He has been writing articles about sustainable winegrowing issues since 1998.

Since 1989, California growers have had to report the use of pesticides each month to their County Agriculture Commissioner’s Office. For each application, they are required to report the pesticide used, how much was applied, the date it was applied, and the crop to which it was applied. DPR summarizes this information in an annual report that is available online. I decided to take advantage of this great resource and analyzed the trends in the application of several groups of high-risk pesticides to find out if their use has changed in the Lodi region. The results were so dramatic I wanted to report them here because I think it is a great compliment to all the hard work Lodi winegrape growers have done to reduce pesticide risk in their vineyards. Pesticides, whether organically approved or conventional, are used to kill pests because they are toxic to them in some way. Some of the newer pesticides stimulate the plant to produce chemicals that are deleterious to pests. Because of these properties, they all have side effects on non-target organisms and the environment.

The adverse effects of pesticides are measured using two basic descriptors: hazard and risk. Hazard directly measures the toxicity of a pesticide on lab animals, usually mice. Pesticide risk, in contrast, is based on the toxicity of a pesticide as well as the probability of exposure to non-target organisms. Risk is a significant measure because a pesticide can be relatively toxic, but if used in a way that results in little or no exposure to non-target organisms or non-target sites, it is considered a low-risk pesticide. I prefer to focus on pesticide risk rather than hazard when discussing adverse effects because risk takes into account all the ways growers apply pesticides to reduce the likelihood of exposure to non-target organisms and sites. In other words, it deals with real-world pesticide applications.  Fortunately, most of the pesticides used in winegrape vineyards are not only low risk but also a low hazard. This is particularly true for pesticides recently approved for use in winegrape vineyards. 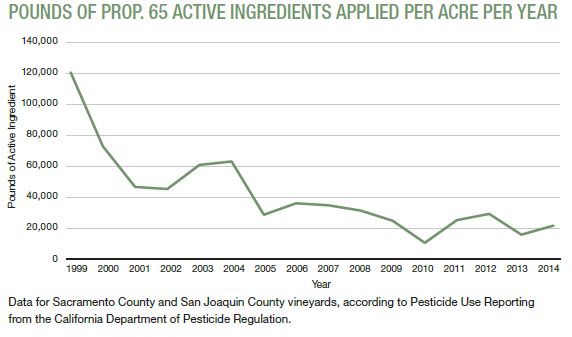 The California DPR has defined several groups of pesticides it considers high risk in order to help growers identify which ones to use less. Three of these groups contain pesticides that are used in vineyards.  One group consists of pesticides that are on the Proposition 65 list of chemicals that research has shown to cause cancer in lab animals exposed to a high dose over time. These include Diuron, Mancozeb, Surflan, and Omite. Another group contains herbicides that have the potential to leach through soil and contaminate groundwater, particularly in soils with high sand content. These include Diuron, Solicam, and Simazine.  A third group is comprised of pesticides that research has indicated may act as reproductive toxins in humans exposed to high levels. These include Agrimec, Rally, and Omite. 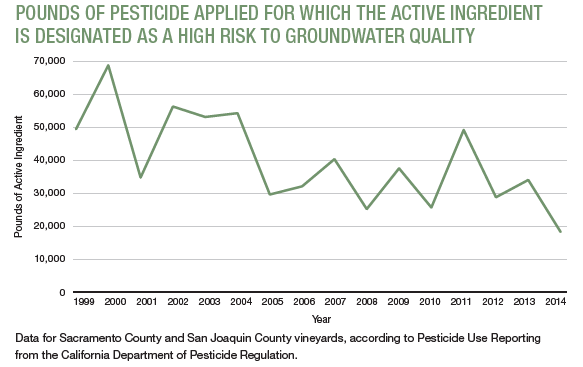 I first compiled the total pounds of active ingredient applied to winegrape vineyards in Sacramento and San Joaquin counties during the years 1999-2014. I then figured totals for each pesticide group. I began in 1999 because the Lodi Winegrape Commission’s sustainable winegrowing program made a particular effort to reduce pesticide risk from 1996 to 1998 through grower outreach and education. This effort continued through the development and implementation of the Lodi Winegrower’s Workbook in 2000 and culminated with the launch of the LODI RULES for Sustainable Winegrowing program certified by Protected Harvest. To qualify for certification under the LODI RULES program, a grower’s pesticide application program for the year cannot exceed a threshold of pesticide risk points. There are now more than 25,000 acres of Lodi vineyards certified under the LODI RULES program. I chose 2014 as the endpoint because it was the most recent year for which an annual pesticide use report was available for each county.

The use of pesticides from each of the three groups in Lodi vineyards has declined significantly since 1999.

The use of those on the Proposition 65 list has declined 81%. The use of herbicides that have the potential to leach into groundwater has declined 62%. The use of pesticides with the potential to be reproductive toxins has declined by 89%. The accompanying graphs provide details about the annual use of these materials over time. By any measure, this is a dramatic decline in the use of these high-risk pesticides. One factor that has resulted in a decline in the use of high-risk pesticides in Lodi winegrape vineyards is that pesticide registrants (i.e., chemical companies) have been developing low-risk alternatives to the older, higher risk chemistries. The Lodi Winegrape Commission’s grower outreach and education program encouraged growers to use less of the higher risk pre-emergent herbicides such as Simazine, Diuron, Solicam, and Surflan in favor of contact herbicides, which were much a lower risk. One of the main reasons that the use of Prop. 65 materials declined so dramatically was due to a great reduction in the use of the miticide Omite. Effective miticides were developed that were not on the Prop. 65 list, such as Apollo, Fugimite, and Onanger. 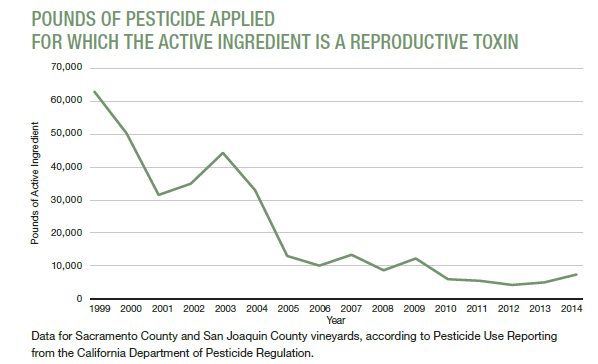 Even the use of sulfur, which is applied to both conventional and organically managed vineyards, has changed dramatically: The average amount of sulfur applied annually to a vineyard acre in Lodi declined 23% between 1999 and 2014. I would like to highlight the value of DPR’s PUR database. My analysis would not have been possible without the full pesticide use reporting requirement that California implemented in 1989 and DPR’s summary of this data each year. For those of you not familiar with this requirement, the data reported here are not samples of pesticide use acquired via grower surveys but the actual amount of pesticides applied to California vineyards.

Discussion of pesticide use in agriculture makes many growers uncomfortable. That is due in part to the average consumer’s lack of knowledge about pesticides and their use. This lack of knowledge is made worse by the uninformed notion that organic winegrape growers do not use any pesticides. The reality is that pesticides— both organically approved and conventional— will always play an important role in agriculture. That is because we will always have pests, no matter how natural we try to make our farming. The goal we should all strive for is reducing pesticide risk, and the data reported here show that the Lodi winegrape growers have made significant progress in achieving that goal.

The article is reposted with permission from Cyril Penn of Wine Business Monthly.  March 2017, Wines & Vines.

UPDATE:  The Lodi Winegrape Commission continues grower outreach and education that reduces pesticide risk. The LODI RULES program has grown to over 51,000 acres of certified vineyards across California and in Israel. The Commission has teamed up with scientists like Dr. Kent Daane and organizations such as the Xerces Society and Western SARE to teach farmers how to implement beneficial insects for pest control – check out their latest video on mealybug biocontrol by clicking on the image below. This winter, the Commission will host an outdoor grower meeting with local sheepherders to demonstrate how grazing can be used for weed control in vineyards.