Some wine grape growers prefer to dry farm wine grapes, while others have no choice because either they have no water for irrigation or no means to apply water during the growing season. Of course, dry farming is as old as grapevine cultivation and it remains a hallmark of old world viticulture. However, unlike many parts of Europe, almost all California wine growing areas experience drought during the summer, making dry farming especially challenging. Controlling year-to-year variations in shoot growth and fruit yield, and minimizing vine growth variability within vineyards are among them. This article addresses some of those challenges.

The following discussion assumes winter rainfall sufficient to fill the soil comprising the grapevine root zone. If the root zone is less than full, the vines will likely suffer prolonged severe water stress during the growing season and fruit yields and quality will suffer. Some growers avoid this problem with artificial rainfall (i.e. irrigation) applied prior to budbreak, often with a temporary irrigation system. Normally, the decision to irrigate is based on moisture readings. Soil moisture readings can also indicate when the amount of water applied is sufficient. (For more on irrigation in drought conditions, see my previous article.) 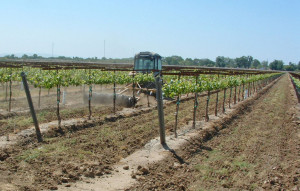 The benefits of cover crops, in addition to those listed in the preceding paragraph, are numerous and well known. However, they also compete with grapevines for soil resources, including water, and for this reason, they are potentially detrimental. To conserve soil moisture for vine use, they must be mowed and incorporated immediately before or very early in the growing season (figure 1). In fact, early season cross cultivation, whether for cover crop removal or weed control, is a soil moisture conservation tradition for dry farmed, head trained vineyards in California. Cultivation also creates a surface layer of loose soil (i.e. a dust mulch) on the soil surface that serves as a barrier to moisture evaporation. 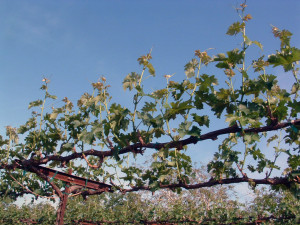 Canopy management is another component of soil moisture conservation in dry farmed vineyards. For dry farmed vineyards, the primary objective of canopy management is to limit the number of leaves per unit land. Leaves, of course, are the primary avenues of vine water loss or transpiration. To set the canopy foundation, prune to a limited number of one-bud spurs to limit the number shoots and maintain this number by early season shoot thinning (figure 2). Remove lateral shoots that extend beyond a node or two, as long as their removal does not expose clusters to direct afternoon sunlight. Hedge as needed to ensure no more than twenty nodes or leaves per shoot. Finally, thin clusters to maintain a balance between crop and canopy that favors timely fruit maturation and optimum grape quality.

Canopies that have been precisely limited for dry farming have little tolerance for damage because the loss of effective leaf area will most likely compromise growth balance, fruit exposure, and fruit and wood ripening (figure 3). Consequently, pests, diseases, disorders, deficiencies, toxicities, and other stresses that damage leaves must be managed aggressively and where feasible, proactively. Mite infestations, severe water stress, heat stress, and light stress are particularly difficult to avoid for dry farmed vines and require extra management diligence. Under these circumstances, protecting foliar tissues internally with systemic materials, such as Agrimek, and externally with coatings, such as Surround, can be particularly beneficial. In addition, take steps as needed to minimize the movement of pests, disease inoculum, and dust from outside into the vineyard.

Root zone management options are more limited for dry farmed compared to irrigated vineyards. Autumn is the only effective time to apply soil amendments and fertilizers to the soil, as this timing has the advantage of moisture from winter rains to activate these materials. For in-season mineral nutrient applications to meet the needs of dry farmed vines, foliar fertilization is very effective. 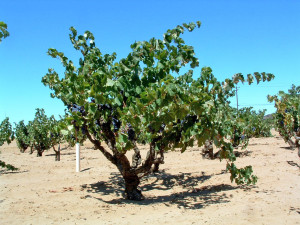 Our last considerations pertain to the suitability of vineyards for dry farming. The suitability of a vineyard increases as the combined tolerance of the scion and rootstock to drought increases. It also increases as the leaf area unit land produced by spacing-training-trellising combination decreases. Vines growing in soils with a higher moisture holding capacity (deep, moderate to heavy texture) are more suitable for dry farming than vines in soils with low moisture holding capacity (shallow, rocky, light texture). Finally, vineyards located in areas with lower evaporative demand (seasonal ET) are better suited than vineyards in areas of higher evaporation.

In summary, dry farmed vineyards are much more sensitive to vagaries in weather patterns than irrigated vineyards. Under non-irrigated conditions, management priorities include water capture and storage in the soil, soil moisture conservation, canopy conservation, and seizing every opportunity to promote healthy roots.

This article is a reproduction of the Mid Valley Agricultural Services September 2008 Viticulture Newsletter.