So far, this year is a drought year unlike any other in recent California history. At this time, many vineyards not only have a limited water supply for irrigation, but the water in their root zones is well below their full water holding capacities. With our rainfall future uncertain, we need to prepare for the worst. Here are four drought management strategies for your consideration.

This first strategy is Artificial Rain. In it, flood, furrow, or sprinkler irrigation artificially refills root zone moisture. This recharging ought to occur about 3 or 4 weeks prior to budbreak to ensure roots emerge from dormancy normally, leading to normal budbreak, shoot emergence, and early season shoot growth. After that, schedule irrigations as in any other year. The Artificial Rain strategy, of course, assumes a supply of water sufficient for both root zone recharge and normal irrigations through the growing season. This assumption, along with the surface irrigation system requirement, is prohibitive for many vineyards. 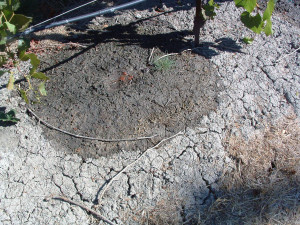 All three of the next drought management strategies need the following water conservation methods for success. First, diligently control weeds in the vine row to eliminate water losses through their transpiration. Second, disk and ring roll the middles to remove transpiring vegetation and to make a barrier that limits evaporation. Third, thin shoots early (≈ 3″ to 6″ long) and severely (< 5 shoots per foot cordon) to reduce transpiration through vines. For the same reason, if canopies grow too large, hedge them to about 14 to 16 nodes per shoot after shoot growth stops.

These strategies also warrant maximum value from applied water. To that end, ensure the best possible drip irrigation system performance with regard to uniformity in pressure, flow, and distribution. Also, promote the highest possible infiltration rate into the soil through organic and mineral amendment additions (fig. 1).

The second drought management strategy is familiar to wine grape growers. It is Regulated Deficit Irrigation (RDI). The only difference for this year is that RDI schedules begin 3 or 4 weeks before budbreak instead of some time between May and July. This early onset of drip irrigation is necessary to accommodate our current soil moisture deficit. Even with these early irrigations, the soil profile will likely only contain about 4% to 13% of the moisture that it could if fully recharged from rain. After initiating irrigations, monitor vine moisture status, soil moisture status, and evapotranspiration (ET) as you normally would, and irrigate accordingly. The longer RDI season requires more irrigation water than in a normal year, but less than Artificial Rain due to greater irrigation efficiency and plant water use efficiency.

With the Stretch The Limited Irrigation Water strategy, soil moisture status is the primary basis for irrigation schedules. This strategy uses a specific level of depleted moisture as a threshold for applying water. This requires soil moisture sensors within the root zone that are read at regular intervals. Install at least 2 sensors at each monitoring location: one at about 10″ or 12″ for irrigation scheduling and another at 30″ or 36″ to monitor deep soil moisture depletion. The deep sensor indicates when vines become entirely dependent on irrigation water. Often, it is insightful to have sensors at two locations within a block: one where vines are most prone to water stress and another where they are least prone. With Stretch The Limited Irrigation Water, stress prone areas will become more pronounced than usual (fig. 2). For this reason, they ought to be carefully monitored and irrigations adjusted to minimize the severity water stress there.

If the water supply is sufficient, set the early season soil moisture threshold higher than the later season threshold. Irrigating this way moderates water stress and assures complete canopy development. During this time, apply only enough water to maintain a moderate and steady rate of shoot elongation (3″ to 4″ internodes) until reaching full canopy (14 to 16 nodes or leaves per shoot). After that, greater water stress is not only beneficial for water conservation, but also desirable for wine grape quality. For example, an early soil moisture threshold may be -60 to -70 cbars, while later it may -100 to -110 cbars measured with resistance blocks (Watermark sensors or gypsum blocks). Soil moisture content thresholds may be similarly determined and set for capacitance sensors & neutron probes. 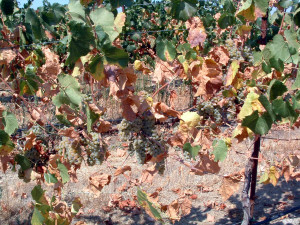 Keep The Vines Alive is a strategy of last resort because its goal is to save the vines but not the crop. Apply water only when necessary to prevent complete defoliation. As such, irrigation scheduling depends almost entirely in visual observations of canopy condition. As with the Stretch The Irrigation Water strategy, focus your observations on the areas prone to water stress. With Keep The Vines Alive, however, there is greater tolerance for leaf damage and on the lower (basal) portions of shoots, leaf loss (fig. 3). This strategy also requires removal of all crop to avoid crop stress and minimize vine decline.

In conclusion, we have four drought management strategies that accommodate varying water supplies. Where we have an abundance of irrigation water, use the Artificial Rain strategy. Alternatively, make better use of your water with Regulated Deficit Irrigation. Stretch The Irrigation Water using soil moisture thresholds. Finally, where water is very scarce, irrigate to Keep The Vines Alive until next season.

This article is a reproduction of the Mid Valley Agricultural Services January 2014 Viticulture Newsletter.