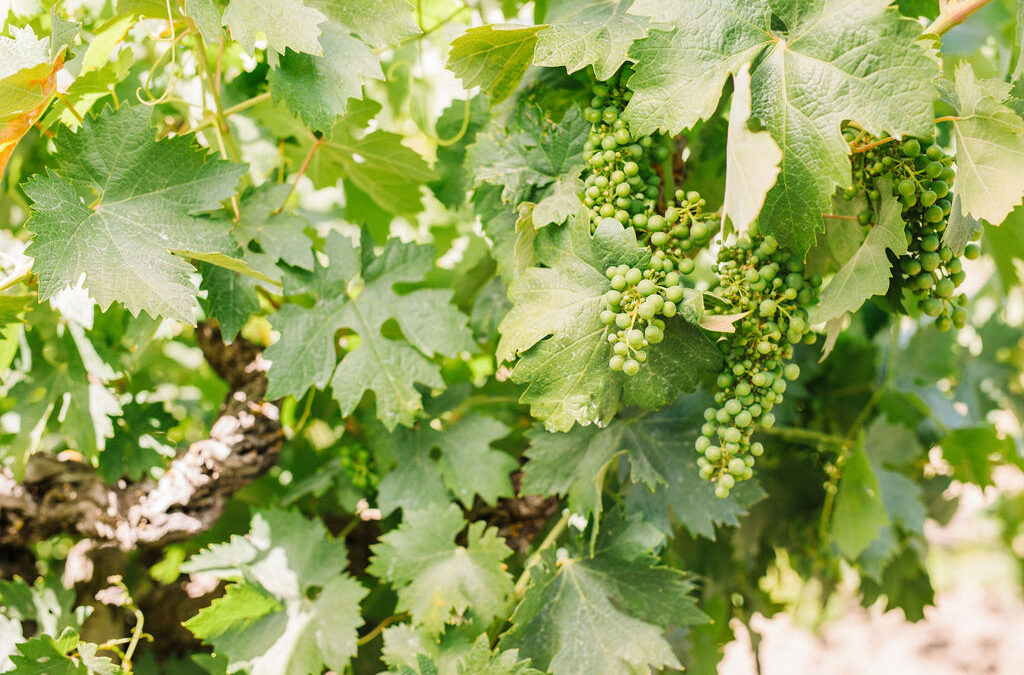 California was home to some of the earliest New World winegrape growing pioneers. Franciscan missionaries led the way when they planted V. vinifera (Mission) vines around 1770. Today, there are more winegrape acres in California than in any other New World wine-producing country. The history behind the exceptional growth of California winegrape production involves daring investments, natural disasters involving pests and diseases, and scientific achievements and technological innovations.

In this article, we will consider some facets of viticulture particularly in California. Some are the outcome of historical circumstance, while many others are the results of experimentation. Still, others were attempts to adopt Old World viticultural practices. In all cases, California’s unique range of soils and climates and the resourcefulness of California’s winegrape growers have shaped them. 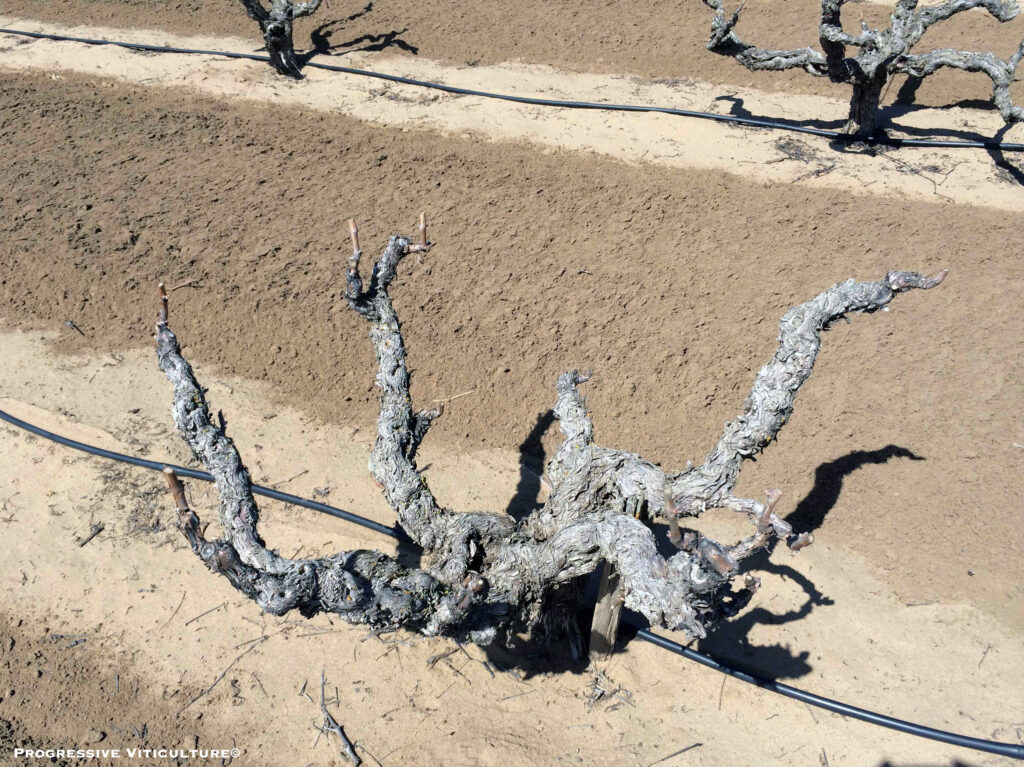 Early California grape production involved a single variety – Mission. Around 1850, that changed as several individuals imported Old World varieties. Zinfandel was among the early arrivals, although no variety by that name existed in Europe and its origins were unknown. By 1860, it was widely grown across northern California and by 1900 it was one of the most common varieties in the state (Figure 1). Although its European sources have recently been discovered, Zinfandel and California remain closely associated in the wine world.

The origin of Petite Sirah in California is also unclear and for a time, its identity was murky because it occurred in mixed plantings with other, more obscure varieties (Beclån and Peloursin). Nevertheless, its ability to thrive in many places in the state was quickly apparent. For this reason, Petite Sirah became a popular variety after 1897.

At about the same time, California grape growers initiated their first battle against Phylloxera by planting vines on resistant rootstock. St. George was the most widely planted rootstock until the planting boom of the mid-1960s. In the years that followed, AxR#1 became prominent in Phylloxera infested coastal vineyards, and Dogridge and 1613C appeared in some nematode infested sites in the interior. None of these rootstocks were widely planted elsewhere in the world. In-state rootstock breeding efforts further distinguished California rootstock use through plantings of Freedom, Harmony, 039-16, RS-3, and more recently, the GRN rootstocks. Since about 1990, following the advent of Phylloxera biotype B, many European-bred rootstock hybrids became common, such as SO4, 5BB, and 1103P. Their use pattern and percentage of total plantings have been dynamic and uniquely Californian. 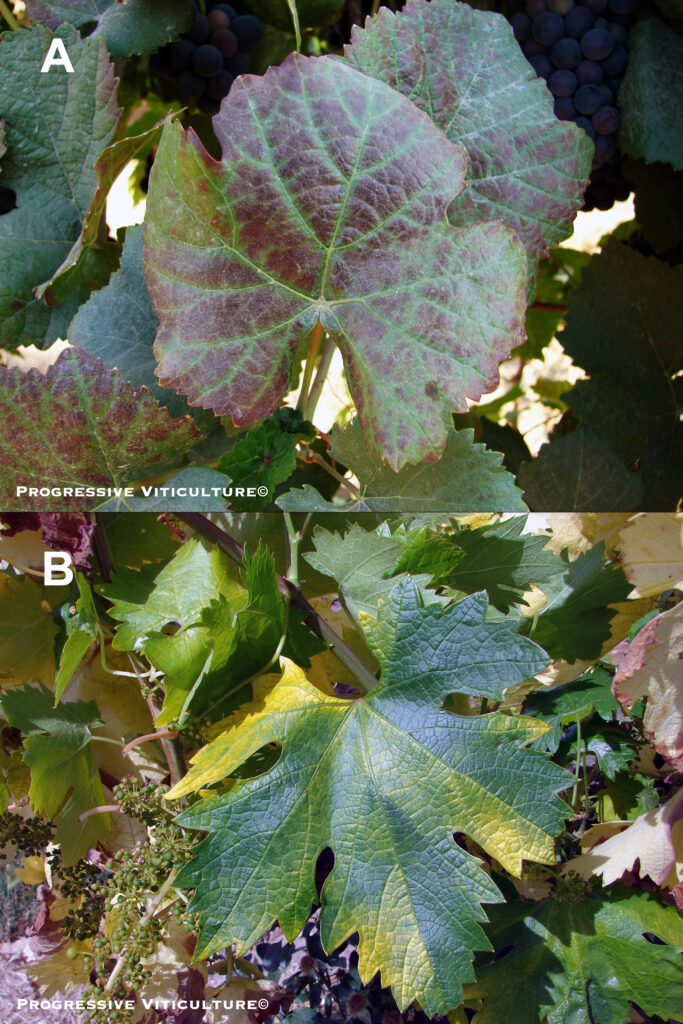 Unknowingly, virus pathogens came to California with infected grapevines imported from Europe. Leafroll, fanleaf, and rugose wood viruses were among them (Figure 2). In the 1950s, the University of California (UC) and the California Department of Food and Agriculture (CDFA) initiated the California Grapevine Registration and Certification (R & C) program. It is a nursery product quality assurance program for variety identity and the testing for certain known virus diseases. The R & C program has contributed greatly to the consistent production and high quality of California winegrapes.

In early California vineyards, vines were planted in squares with dimensions ranging between 7 ft. and 12 ft. The vines, of course, were head-trained. In the 1950s, interest in mechanization became the impetus for spacing, trellising, and training research. Based on trial results, UC researchers recommended 6 ft. x 12 ft. and 8 ft. x 12 ft. spacing for moderate and high vigor varieties, respectively. We have since learned the fruit yield advantages of rows spaced closer than 12 ft., but the 6 ft. to 8 ft. in-row vine spacing has remained broadly applicable for single canopy vineyards. Experience has confirmed closer vine spacing leads to dense canopies and associated problems under California conditions. In contrast, larger vines with horizontally divided canopies supporting as much as 12 ft. of cordon are consistently successful on deep soils in warm climates (Figure 3). 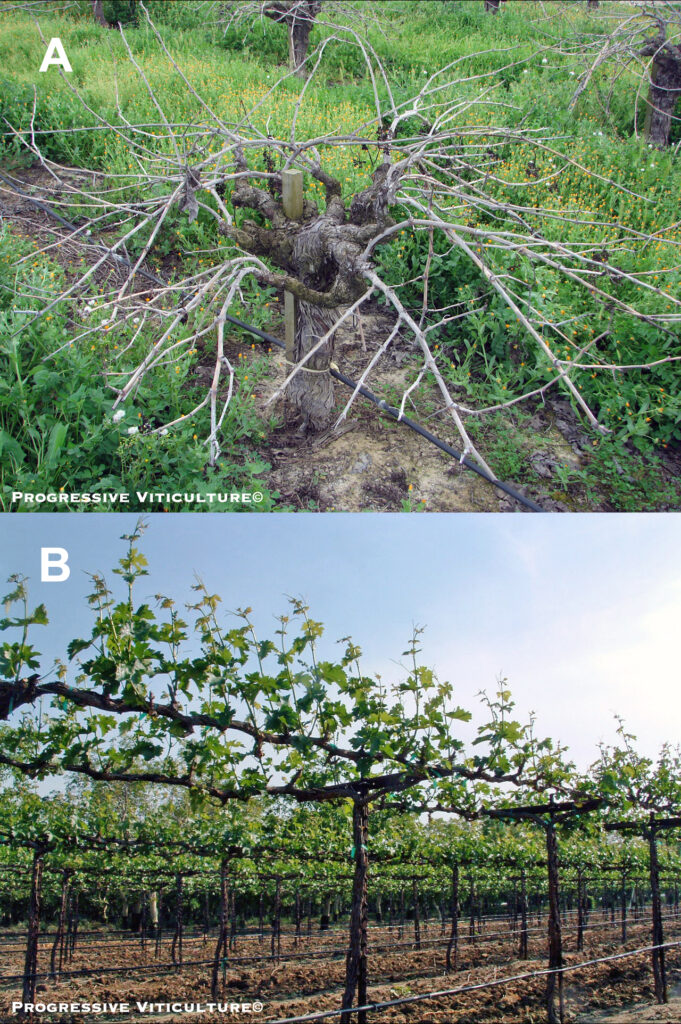 California winegrape trellises started simple, consisting of a single cordon wire or a cordon wire with one or two foliage wires positioned vertically above it. A short time later, crossarms came into use to enhance leaf exposure and shield grapes from direct exposure to the intense California sun. The crossarm concept was conceived in the 1930s for the Emperor table grape variety. In its original incarnation, it was about 42 in. long and sloped downwards about 30o from horizontal towards the sun. Crossarms for winegrape T trellises are typically shorter (18 in. to 24 in.) and are positioned horizontally (Figure 4). In recent years, some vertical shoot positioned (VSP) trellises, which became popular during the 1990s, have been modified with crossarms to lessen direct sunlight exposure.

Figure 4. A table grape vineyard with an early version of a crossarm (B) and a T trellis effectively put to use for white Zinfandel production in Lodi (B). (Photo A source: H. B. Richardson via Winkler, et. al. (1974), Photo B source: Progressive Viticulture©)

In California, table grape vineyards have also influenced the row direction of winegrape vineyards. It is commonly east to west to minimize direct exposure of fruit to the afternoon sun. This contrasts with many other winegrowing regions of the world for which heat and sunlight are limiting and north-south rows are more viticulturally efficient. 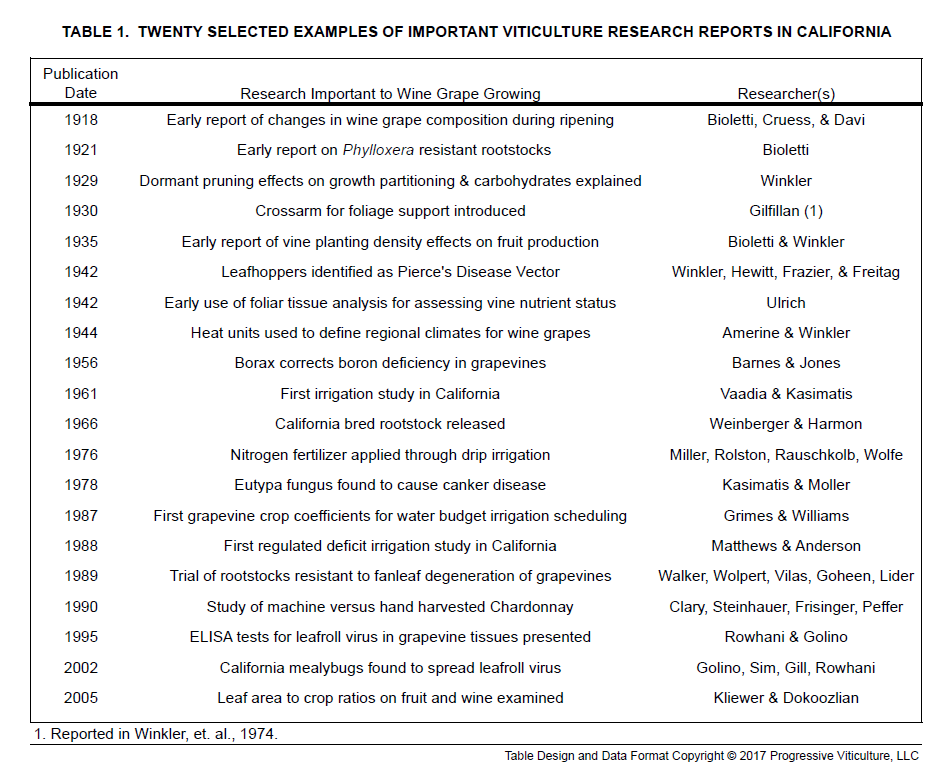 Water management, of course, is critical for vineyards in California because of its dry summers. Since the 1950s, California researchers and growers have been innovators in vineyard water monitoring, irrigation scheduling, and the use of water management to improve winegrape quality (Table 1). They have also advanced the many benefits of cover crops and mineral nutrient management technologies, including plant tissue testing, foliar fertilization, and fertigation.

Undoubtedly, California winegrowing has come a long way and rests on a solid foundation.

A version of this article was originally published in the Mid Valley Agricultural Services November 2015 newsletter and was updated for this blog post.

Sullivan, CL. A companion to California wine: an encyclopedia of wine and winemaking form the mission period to the present. University of California Press, Berkeley. 1998.

Winkler, AJ. The effect of dormant pruning on the carbohydrate metabolism of Vitis vinifera. Hilgardia. 6, 153-173. 1929.

Ulrich, A. Potassium content of grape leaf petioles and blades contrasted with soil analysis as an indicator of the potassium status of the plant. J. Am. Soc. Hort. Sci. 41, 204-212. 1942.