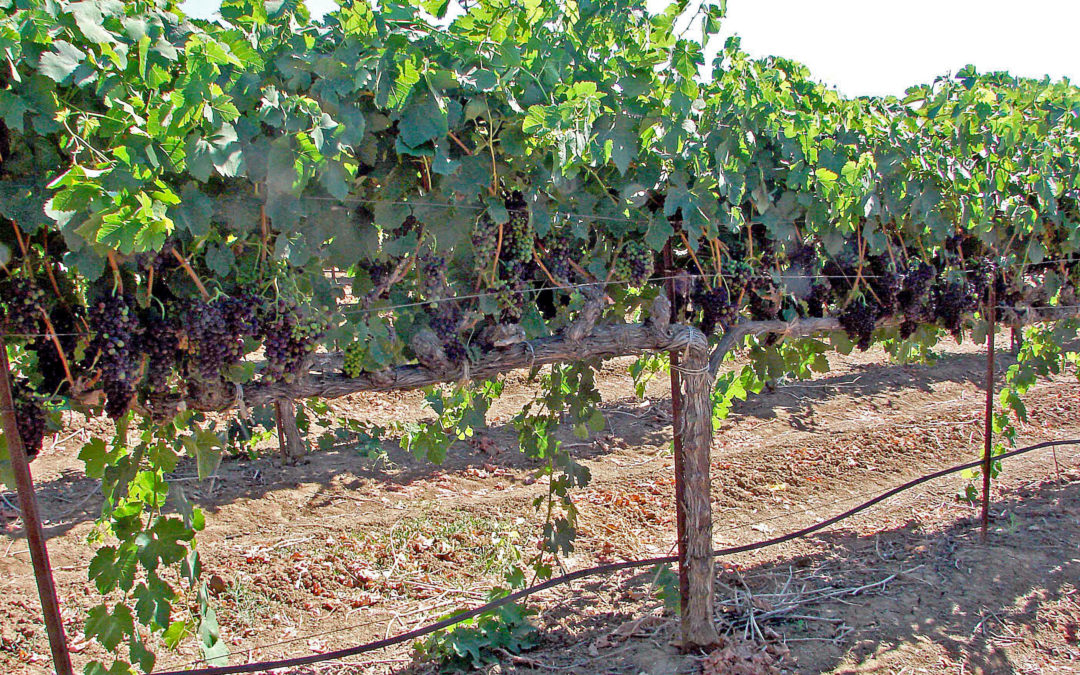 Vertical Shoot Positioned (VSP) trellis systems involve single rows of tall, thin panels of grapevine shoots positioned upwards above unilateral cordons, bilateral cordons, or canes (Fig. 1).  Shoot positioning involves pairs of movable wires, with the paired wires installed on opposite sides of the vine row.  Early in the growing season, after shoots are sufficiently long, the wires are moved from below the cordons or canes to positions above them next to the foliage.  Pulling the wires tight and locking them into a (JR) clip, notches of a line stake, or a short cross arm positions the shoots upright into a narrow foliage panel.  Wire moving and locking are normally manual operations, but mechanical wire placement with temporary clips is possible. 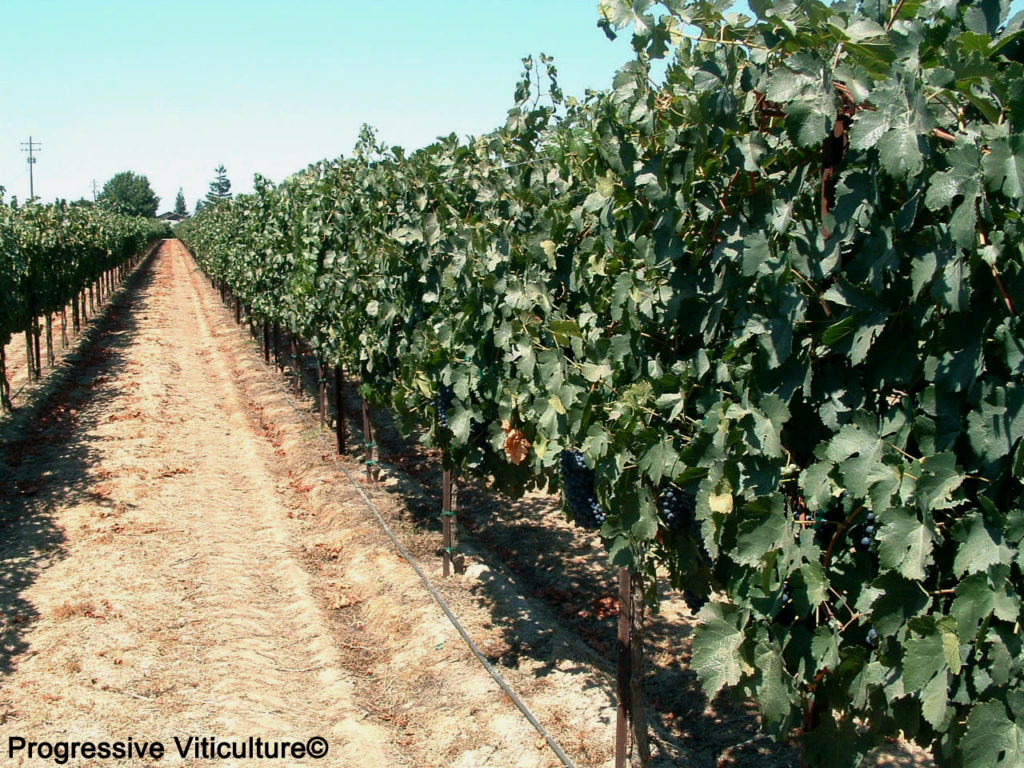 VSP trellises were a popular choice for California winegrape vineyards developed during the industry boom years of the 1990’s.  Many of these vineyards were located in areas with warm, sunny climates.

After shoot positioning and hedging, VSP trellised vines have a tidy, manicured appearance that appeals to many.  VSP trellised vines, because they occupy narrow horizontal spaces, allow more rows to fit per unit land compared to many other single canopy systems, such as the T-trellis, which can increase their potential fruit production per acre.  In addition, VSP trellis systems readily lend themselves to mechanized vineyard operations, which adds greatly to their appeal.  The comparatively low cost for VSP trellis parts and installation is another important advantage.

VSP trellises were first used in cool areas where the risk of fungal disease is high (e.g. New Zealand, Germany, and France).  In these areas, VSP trellising keeps vine foliage away from the soil and in a position that facilitates hedging and spraying.  Appropriate use of VSP trellises in cool areas involves shoot thinning to moderate shoot densities (≤ 6/ft. cordon or cane), which further enhances fruit zone coverage of spray applied materials (Fig. 2). 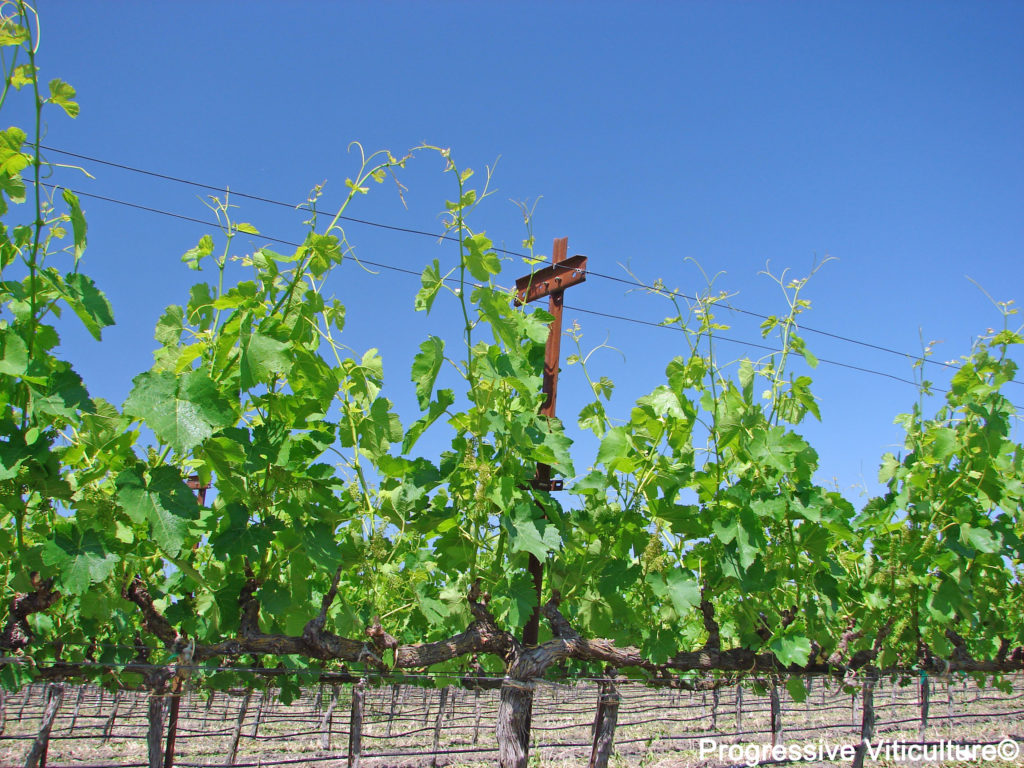 In addition to disease control benefits, VSP trellising provides important viticultural benefits for cool areas.  Upward positioning creates a large expanse of leaves that is well exposed to sunlight (typically 48 in. tall with 12 to 18 nodes per shoot), which enhances photosynthetic capacity.  Simultaneously, it maintains apical dominance of upward oriented shoot tips, which intensifies the vigor of shoot growth and increases the likelihood of reaching full canopy under marginal heat and sunlight.  Further, vertical shoot positioning forces clusters to the outside of the canopy, which increases fruit exposure to sunlight and enhances fruit ripening under cool climate conditions.  Finally, the low cordon or cane position common to VSP trellises (commonly ≤ 32 in.) places the fruit close to radiant energy reflected off of vineyard floors.

Of course, the majority of California winegrape growing areas receive ample heat and sunlight that places few limits on foliage growth and fruit ripening (https://www.lodigrowers.com/comparative-wine-growing-climatology/).  Under these conditions, VSP trellising can present some canopy management challenges.

In many California VSP vineyards, shoot growth is highly vigorous and canopy development is excessive, resulting in shoots overhanging the top or the trellis (Fig. 3).  Apical dominance from upward shoot positioning exacerbates this condition.  To remove the excess foliage and impose balance between foliage and fruit, hedging is necessary, sometimes repeatedly. 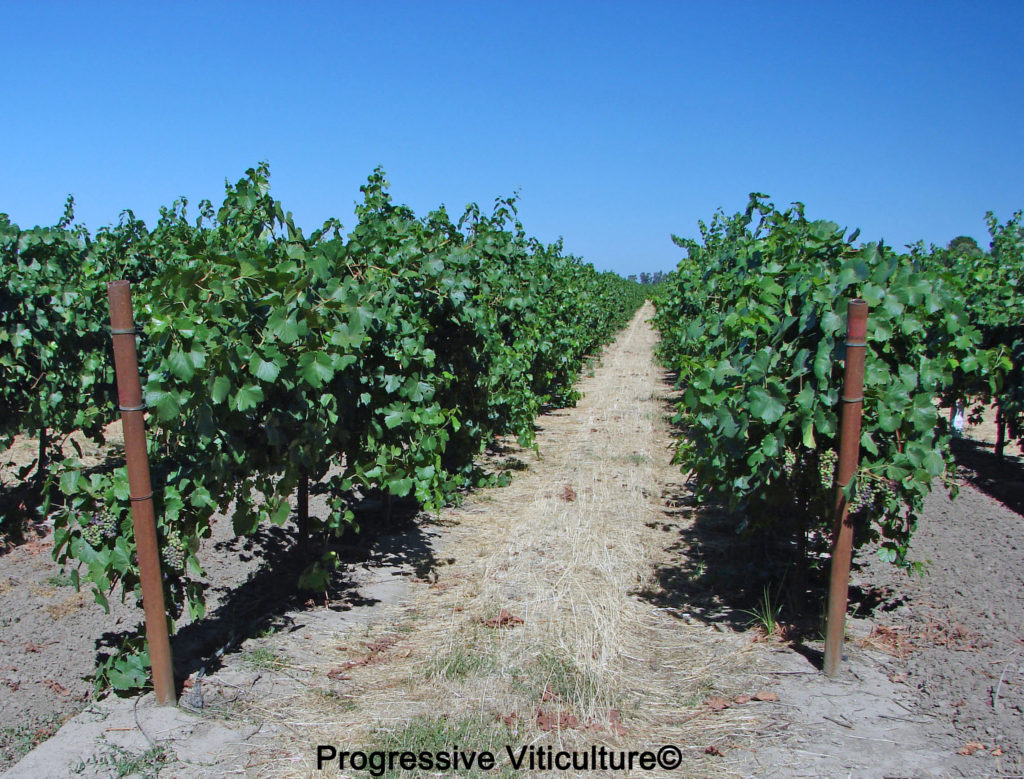 However, removal of active shoot tips by hedging complicates matters.  In absence of primary shoot tips, formerly suppressed lateral buds on the main stem become active.  They produce lateral shoots, which may bear a second crop.  More importantly, leaves on lateral shoots create shade within the fruit zone, which if not removed, increase the potential for fungal disease, suboptimal fruit color, and excessive herbaceous fruit character.

The thinness of VSP canopies also presents challenges for many California vineyards.  It exposes a significant number of berries to intense California sunlight.  At the same time, it limits yields to less than 5 tons per acre, which for some vineyards is not economically viable.

There are two primary approaches to controlling VSP shoot growth vigor and canopy development.  The first is limiting the supply soil resources, especially water and nitrogen.  Simply restricting the amounts of water and nitrogen applied to the soil, however, is usually not enough to control shoot growth.  The presence of a competitive cover crop, which will consume soil resources, heightens the impacts of limited water and fertilizer applications.

Canopy division into 2 or 3 panels greatly lessens the density of VSP foliage.  The Smart-Dyson is a 2-canopy system with opposing panels of upward and downward foliage fastened between wires.  As such, it needs spurs oriented upwards and downwards, which may require cordon retraining.  Downwards positioning devigorates the growth of the lower panel, and the fruit it bears tends to develop more slowly than the fruit on the upper panel, which complicates vineyard management and harvest scheduling.

The Smart-Ballerina is a 3-panel system.  Ballerina shoot positioning is simply allowing some shoots on both sides of the vine to drape outwards and slightly downwards, resulting in an inverted Y canopy configuration (Fig. 5).  The Smart-Ballerina does not require a drastic change in spur orientation, although some will gravitate outwards.  This system is not well suited to vineyards with close row spacing in which outward positioned shoots impede vineyard access. 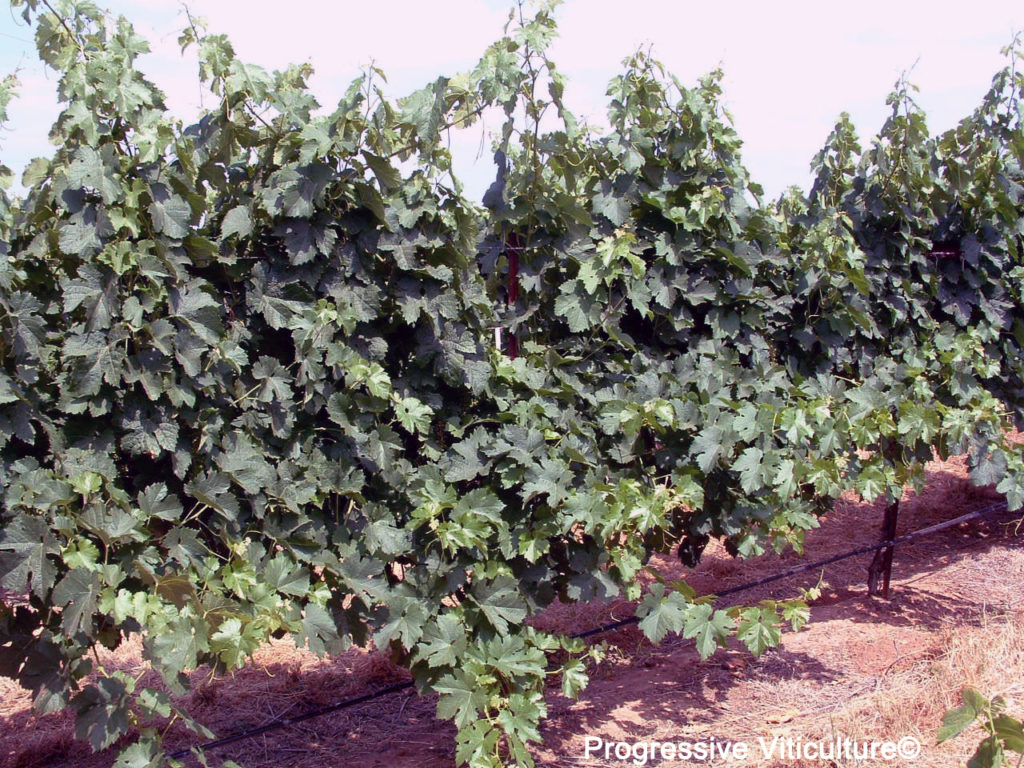 The most drastic alternative for adding more buds to intensify competition for internal vine resources is perhaps the most viticulturally effectual.  Removing every other vine and extending cordons on the remaining vines effectively increases the number of buds per vine while at the same time, making possible moderate shoot densities and a high proportion of exposed leaves (Fig. 6).  The downside is the cost due to the lost return on capital investment in vines, costs for vine removal and retraining of the remaining vines, and diminished yields during retraining 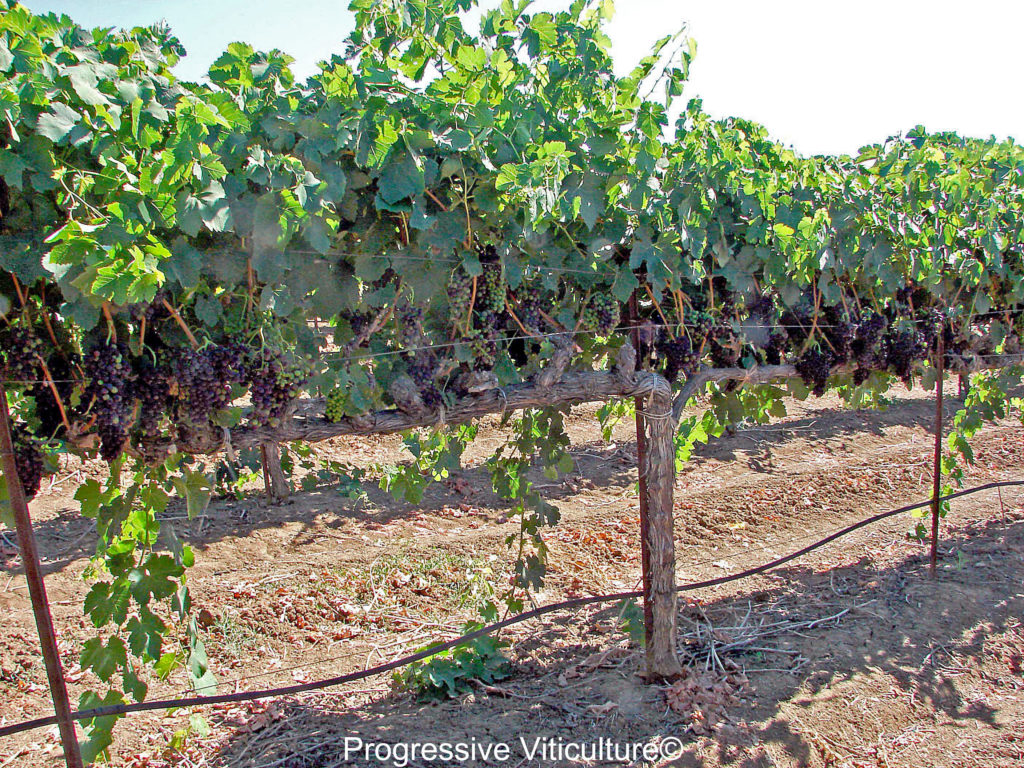 Fruit zone leaf removal from VSP canopies requires careful execution to minimize exposure of fruit to direct sunlight, which can cause ambering, bleaching, sunburn, or shrivel.  In many VSP vineyards, light leaf removal on the afternoon shade side of the trellis (north or east) or removal of basal lateral shoots is sufficient to expose fruit to dappled sunlight, improve air movement through the fruit zone, and enhance coverage of spray applied materials (Fig 7). 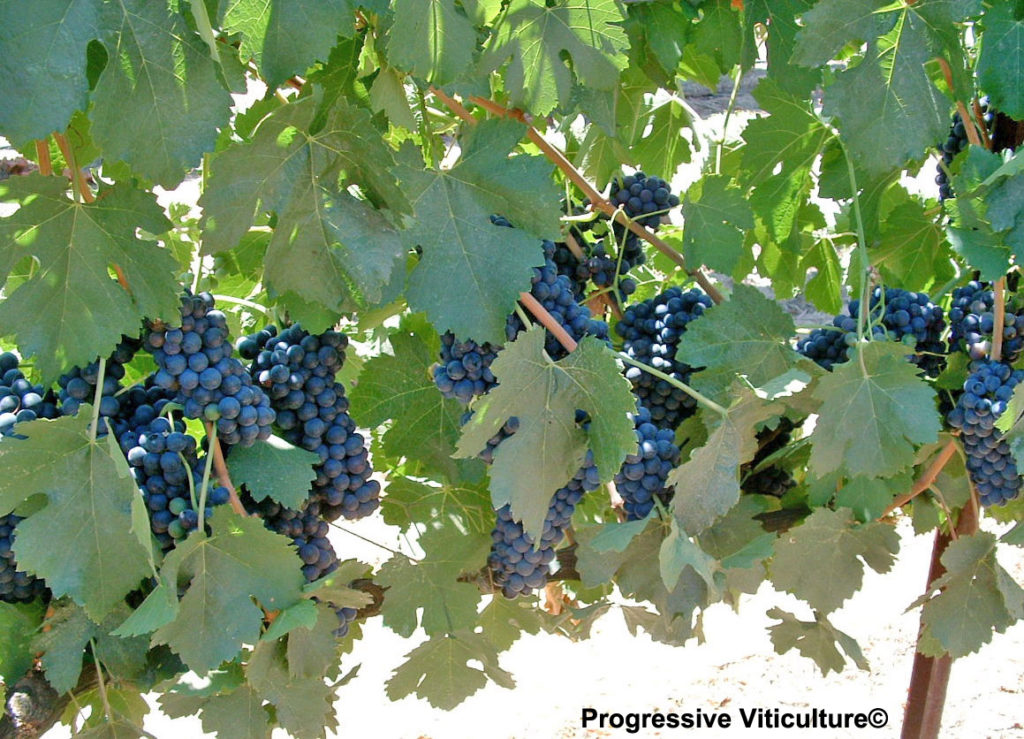 A version of this article was originally published in the Mid Valley Agricultural Services April 2003 newsletter and was updated for the blog post.