It seems like a pretty substantial understatement to say that 2020 has been a strange year and northern California weather decided to jump on the bandwagon.  Most of northern California observed no measurable rainfall for the entire month of February for the first time in recorded history, and record warmth in February through early March encouraged an early start to the growing season. You could also count the number of storms that produced more than one inch of rain (which is a pretty frequent accomplishment during a normal season) on one hand.  Today I will recap a weird season so far, discuss how Western Weather Group meteorologists forecast and see what changes may lie in store heading into the remainder of the growing season and harvest.

Not to be forgotten, the first rainfall of the 2019-2020 water year actually fell way back on September 16th.  Then there were 70 consecutive dry days till the next significant rain on November 26th– marking the beginning of an active weather pattern that resulted in about 3-5 inches of rain through December.  It looked like mother nature was trying to make up for lost time till the storm train started to lose steam in January.  Even though storm systems continued to impact the state, they were for lack of a better word, wimpy.  None produced more than about half of an inch of rain, leaving January warmer and drier than normal.

In February, high pressure prematurely self-quarantined itself over the West Coast and deflected every self-respecting storm system to the north or south.  The Lodi growing region went 39 consecutive days with no measurable rain and a big fat goose egg for the first time on record in the month of February.  With stubborn high pressure in place, Stockton Metropolitan Airport set 8 record highs over the course of 13 days, including the warmest February day on record (twice) and the earliest 80-degree day on record.  Similar to 2018, this kicked off an early growing season for many growers.  March and April would remain fairly inactive if not for two storm cycles, one in mid-March and one in early April, that would collectively account for nearly half of the season’s rainfall total (seasonal rainfall below).

The Symbiotic relationship between Forecasting and Weather Instrumentation

Over the last couple of decades, the Lodi Wine Commission and Western Weather Group have partnered to provide more accurate weather forecasting and weather instrumentation support to Lodi winegrowers.  Spanning this time, the Commission and individual growers have purchased and installed 37 weather stations that not only have many active crop protection benefits, but also play a pivotal role in improving forecast accuracy.

The Lodi growing region can be separated into many small microclimates where the weather can be significantly different from one location to the next based on topography and proximity to the delta.  Computer models are notoriously bad at identifying these microclimates because they view the Earth’s surface as a grid system where it assumes that topography is uniform across a grid space that can be anywhere from 9 km x 9 km to 28 km x 28 km.  This is why some days you might have woken up to a frosty windshield even though your weather app (which is essentially just a computer model output) said the low would be 40 degrees.  With a dense distribution of weather stations collecting real-world observations, we can identify how each of these microclimates actually behave with respect to what computer models “think” will happen.  With some experience and years of archived real-world data, meteorologists can make more well-informed decisions regarding the forecast.

Since the Lodi area only averages about .01” of rain in the month of July, any 45-day outlook that covers this time period will obviously not have much to talk about besides temperature.  If you love hot summers, it looks like this may be a good one to get out and do some socially distanced wine tasting.  Computer models (below) are suggesting that the average temperature through August 3rd could be roughly 1.5-3°C (3-6°F) warmer than normal which is fairly significant.  That said, in California, when the interior warms up significantly, as the model shows, it tends to strengthen the delta breeze which provides some much-appreciated afternoon cooling.  So maybe 3-6 degrees above average is a little ambitious and the model isn’t quite catching on. 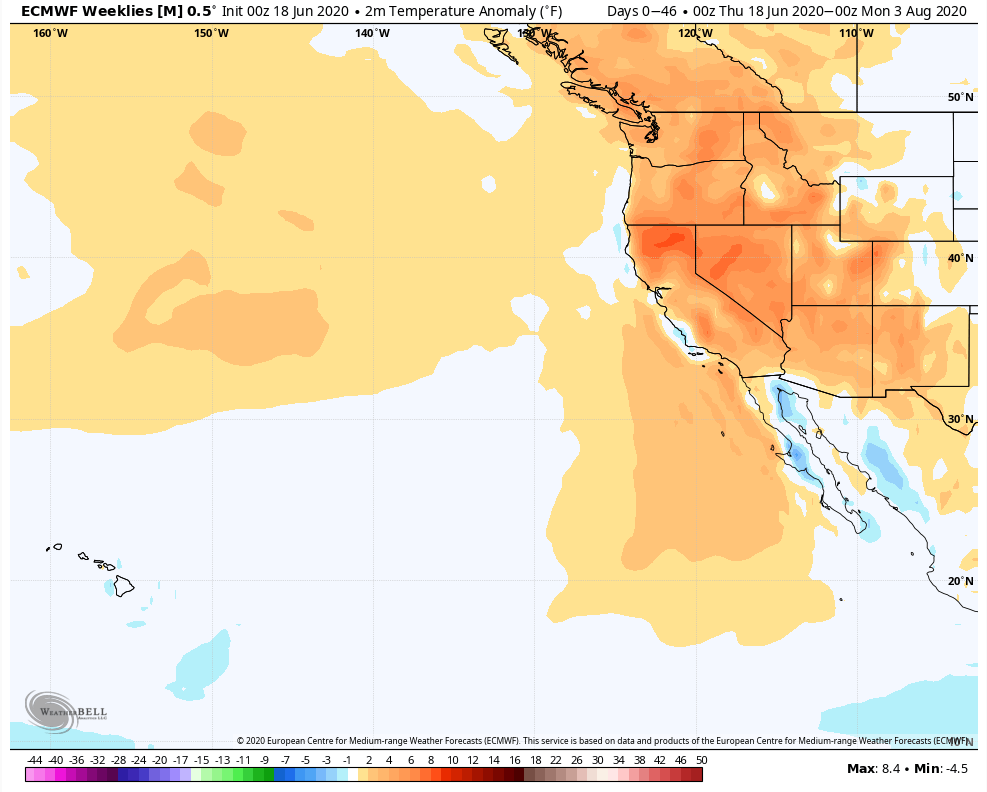 Long-term seasonal forecasts are always tricky, but luckily most people forget what you tell them 3 months down the road if conditions pan out a little differently.  For northern California there are several things to consider, and for the most part they all interact with each other, so how they interact adds another degree of difficulty.  First, we want to look at the El Nino Southern Oscillation (ENSO), but then there are other climate drivers like the Arctic oscillation (AO), the Pacific decadal oscillation (PDO), eastern Pacific oscillation (EPO) and the North Atlantic Oscillation (NAO) that need some consideration.  Sometimes these other climate drivers can offset or amplify the effects of El Nino or La Nina.  That being said, some teleconnections, like the Arctic oscillation, fluctuate and change on much shorter timescales, making them more difficult to predict more than a few weeks out.

At the moment, we are in what is considered ENSO neutral conditions, meaning neither El Nino nor La Nina signals are present.  We do, however, appear to be trending towards a weak La Nina phase with equatorial water temperatures cooling off slightly over the past couple of months.  In the National Oceanic and Atmospheric Administration’s (NOAA) most recent ENSO update they indicate that by this fall we have roughly a 45% chance of being in an official La Nina phase (with a 45% chance that we remain neutral and only a 10% chance that we see El Nino conditions).

What does this mean for northern California?  In four of the last ten years we have had similar weak La Nina conditions or a developing La Nina present going into the Fall.  In three of those years, the Lodi growing region observed significantly greater than average rainfall for the August through November time period.  In the other six years, there was significantly less rain than normal during the same time.  This suggests that early season rain may be a decent possibility this season if La Nina does indeed develop.

Looking at long-range seasonal computer models, they tend to agree.  Both commonly used climate models (below) suggest slightly more rain than average through September, October and November, which adds a certain degree of confidence (but not much) to the idea that maybe a La Nina will be present and previous trends could hold true.  Average rainfall for August through November is around 3” for the Lodi growing region.  If computer models are suggesting a surplus of 1-2”, it isn’t out of the realm of possibility that conditions could get pretty wet towards the end of September and into October.  This could make things a little more challenging for grape growers if this early season rain materializes and arrives before grapes are ready to harvest. 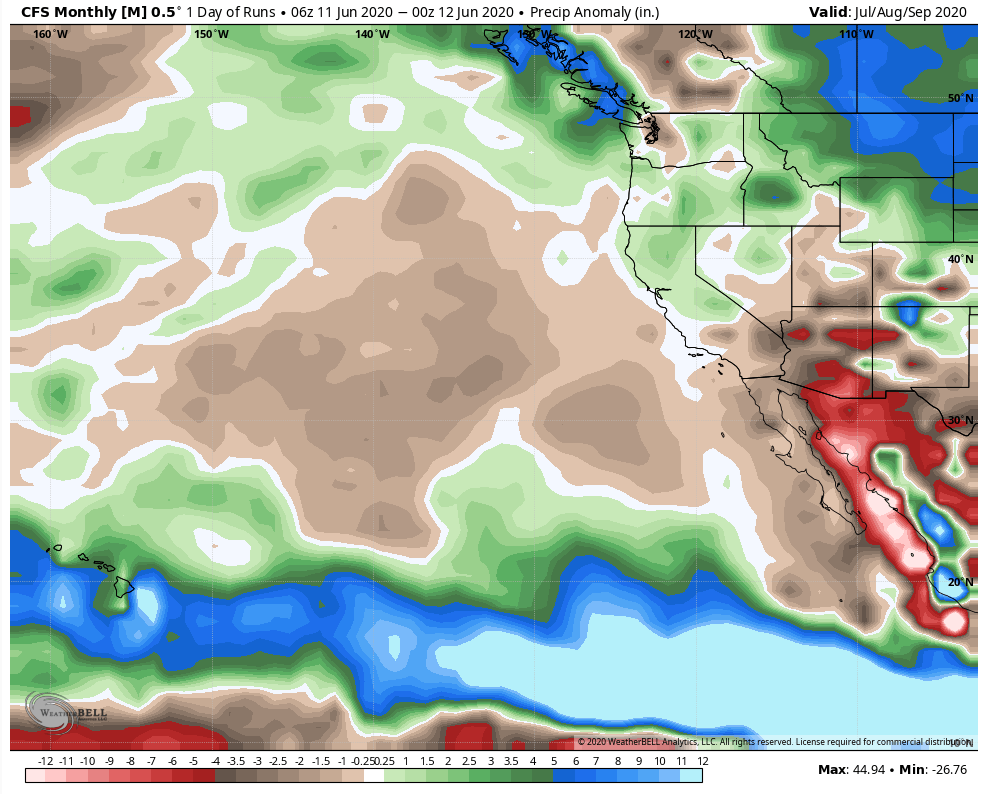 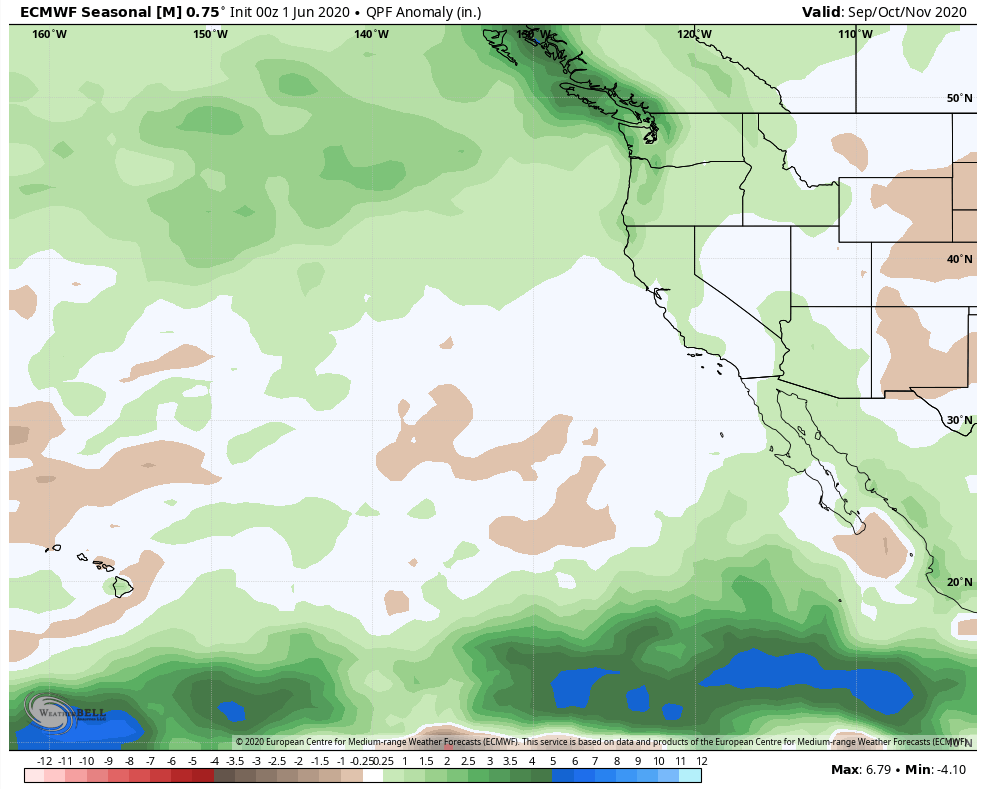 In summary, it looks like the 2020 vintage will enjoy an extended growing season with a warmer than average summer, however, early season rain could interfere with harvest plans.