Verticillium wilt causes significant losses in many annual and perennial crops in California, but it is a minor disease of grapes. Caused by the fungus Verticillium dahliae, it was first detected in grapes in 1973. Disease incidence as high as 15% in certain young vineyards was reported at that time, but generally, incidence is low (1 to 2%) and may be seasonal. It has been generally found in new vineyards planted on sites previously planted in Verticillium wilt–susceptible crops such as tomatoes, melons, or other susceptible vegetables. 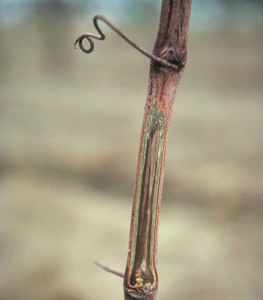 Leaves begin to wilt and collapse as early-summer temperatures increase ( fig. 23.2), followed by vascular brown discoloration, streaking of wood, and death of some shoots ( figs. 23.3–23.4). Frequently, vines are only partially affected, and strong new growth often appears in unaffected portions. Wilted leaves normally remain attached, and fruit clusters at the base of affected canes dry up. Vines that are not killed may recover completely by the following year.

This excerpt from Grape Pest Management (Third Edition) was published with permission from UC ANR, and was written by Larry Bettiga. 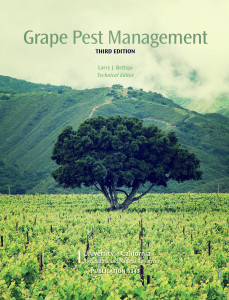 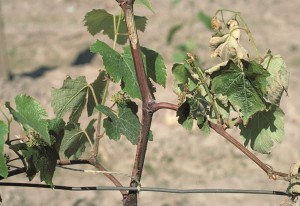 Fig 23.3: Leaves lose turgor and show signs of scald because of invasion of xylem tissue by Verticillium. Photo: A.C. Hoheen.

The fungus survives in the soil and on other plant hosts, such as weeds, vegetables, and cotton; these plants can build up a reservoir of dark, microscopic resting structures (sclerotia). In other woody hosts, root infection is favored by cool spring weather and high soil moisture. Infection occurs through the grape roots, and the fungus migrates up the vascular tissue. Wilt symptoms appear when warmer weather exerts water stress on infected plants whose vascular tissue is plugged with gums, tyloses, and mycelium. Berries on affected shoots dry up early in the season. Exposure to prolonged hot summer temperatures eradicates the fungus from the tops of certain tree crops; this probably also occurs with grapevines and would explain the recovery of badly affected plants.

Verticillium wilt has not occurred frequently enough in California vineyards to warrant control measures. Avoiding planting other susceptible crops for several years before planting grapes is a suggested precaution against losses. 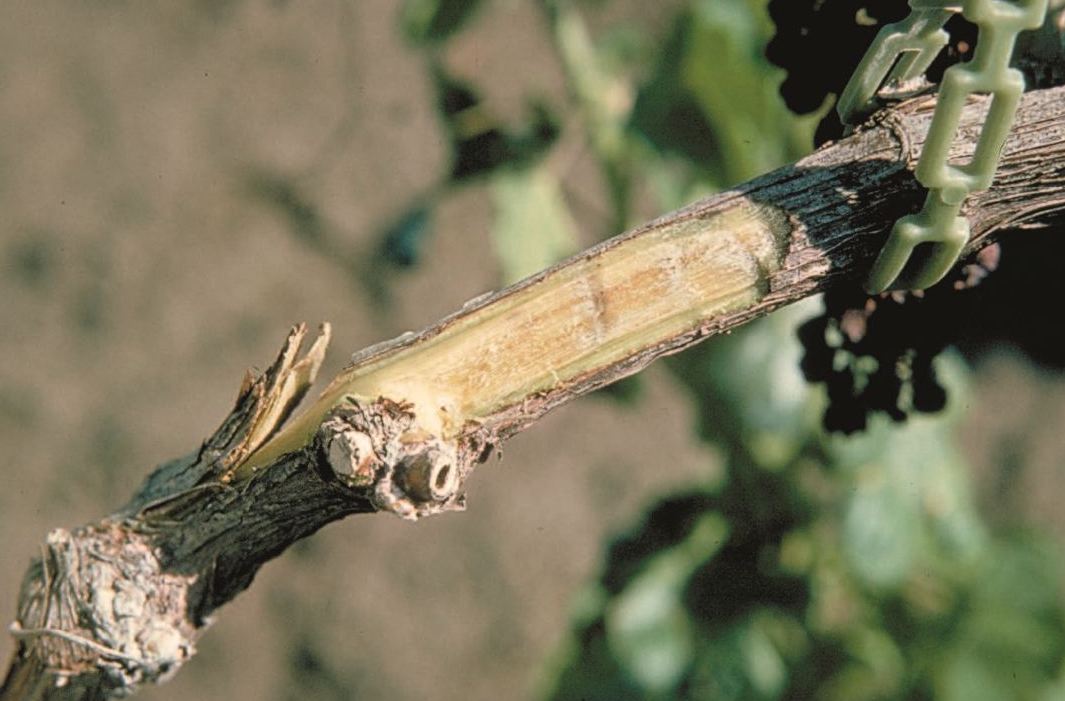