TO HEDGE OR NOT TO HEDGE? 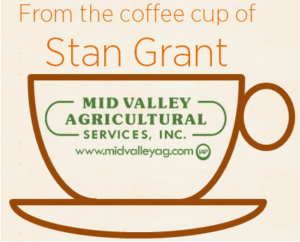 Hedging is a summer pruning method involving the removal the distal or apical ends of shoots.  In some parts of the world hedging is called topping or tipping.  Like all pruning methods, hedging depresses vine growth vigor and capacity.   It does so by reducing the number of leaves and buds, which contain potential leaves.  Leaves, of course, function similar solar panels, converting solar energy into the chemical energy that drives vine growth and development.  Because of its effects, hedging may either be a useful vineyard management tool or an impediment to fruit production and quality depending on when and how it is used.  We will examine such uses in this article.

When is hedging useful?

It is useful in young vineyards during cordon establishment for enhancing uniformity among spur positions.

In the first step in cordon training a shoot originating a near the top of a trunk is tied to the cordon wire of the trellis.  Once the shoot is horizontal, the shoot tip looses its dominance over the lateral buds, which are located at each node of the shoot in the axil between petioles and main stem.  No longer held dormant by hormones produced in the shoot tip, lateral shoots emerge from the lateral buds to form future spur positions.  In this discussion, these lateral shoots, which emerged from buds on the primary stem, are called primary lateral shoots. It is useful for mitigating shoot length variability in producing vineyards.

Variability in shoot length is common in established vineyards.  It occurs to some extent among shoots on individual vines, but marked differences in shoot length among vines within vineyards is normally a greater concern.  Variations in root zone characteristics, especially water holding capacity and fertility, are typically the basis for such variability.  Irregular fruit production and ripening are immediate concerns, while overcropping leading to vine decline are common long-term concerns associated with restricted vine growth within highly variable vineyards.

Hedging is key part of a method for promoting shoot length uniformity.  To this end, hedge canopies after fruit set if canopy development on normal growth vines is excessive (>20 leaves or nodes per shoot).  During such hedging, shorten only excessively long shoots to a length of around 18 to 20 nodes (Figs. 2-4).  To be successful, such hedging requires concurrent actions to improve root zone conditions in areas of lagging growth, such as modifying irrigation schedules for a continuous supply of moderate soil moisture and applying appropriate soil amendments and fertilizers.  Early cluster thinning to avoid crop stress and redirect internal vine resources toward shoot elongation may also be beneficial for equalizing shoot growth. When is hedging detrimental?

When it is used repeatedly and in place of other practices to control foliage growth and limit canopy size.

It is established fact – excessively large canopies and associated shading are detrimental fruit production, grape quality, and pest and disease management.  Usually, excessive vegetative growth is a symptom of inappropriate vineyard management or vineyard design.  Immoderate irrigations or nitrogen fertilization are common causes of too much foliage.  Severe dormant season pruning resulting in too few buds per vine is another promoter of extreme shoot growth.  Some vineyard designs restrict the number of buds per vine, inducing the same effect.  High-density plantings with closely spaced vines on fertile soils are classic examples. In these cases, hedging is viticulturally inefficient, causing the unprofitable loss of invested water, mineral nutrients, carbohydrates, and time.

When it applied improperly. 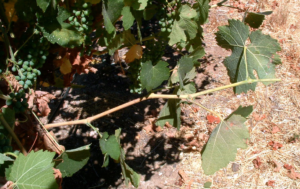 Hedging, like all vineyard practices, has potential risks and benefits.  Both are controllable with properly set hedgers used at appropriate times.  Under most circumstances, hedging established vineyards late, light, and in conjunction with regulated deficit irrigation and balanced mineral nutrient management is best.

This article was originally published in the Mid Valley Agricultural Services July 2000 newsletter, and was edited and updated for this blog post.