The Value of Powdery Mildew Resistance in Grapes: Evidence from California 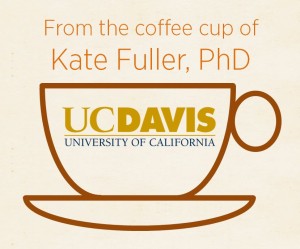 Powdery mildew (PM) is a fungal disease that can damage many crops. On most plants, PM appears as white, powdery spots on leaves, shoots, flowers or fruit, which if untreated, can spread over large areas of the leaves and stems and cause reduced yields and lower fruit quality. Grape PM, Erisiphe necator, is the most prevalent leaf-infecting disease for California grapes. Across the state, it accounts for 74% of grape pesticide use, more than any other grape disease. A range of fungicides can help vineyard managers keep the disease in check in most years, but these are costly and may have negative environmental and human health effects. For many affected crops, such as melons, squash and peas, PM-resistant varieties have been successfully developed. PM-resistant grape varieties are currently being developed (e.g., the VitisGen project). We have developed detailed estimates of the differences in costs of production between conventional and PM-resistant varieties of table, raisin and wine grapes, using budgets for hypothetical “representative” individual vineyards. We use these differences in costs to estimate the potential benefits from PM resistance in grapes over several regions of California. The potential benefits are large but depend critically on the lag until the resistant varieties become available, as well as the subsequent rate of adoption by growers.

This article was originally published by Kate B. Fuller, Julian M. Alston, and Olena S. Sambucci in ARE Update, Vol.17, No. 5, May/June, 2014. The issue can be accessed by clicking HERE. The ARE Update is a bimonthly magazine published by the University of California Giannini Foundation of Agricultural Economics for the purpose of providing wide dissemination of research results and expert opinion from faculty and graduate students in agricultural and resource economics at UC Davis and UC Berkeley. 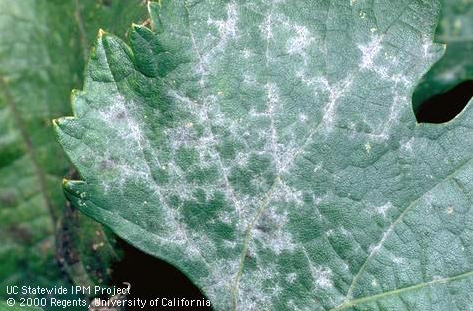 Powdery mildew resistance characteristics can be introduced using either conventional or transgenic approaches. Some potential barriers to market acceptance arise when introducing new varieties, developed using either type of technology, especially for wine grapes where the use of traditional Vitis vinifera varieties predominates. For table and raisin grapes, these aspects are not as important—many currently popular varieties are relatively new.

Conventional breeding entails crossing vinifera varieties, all of which are at least somewhat susceptible to PM, with non-vinifera grapes, and then back-crossing to obtain a vine with very high vinifera content—perhaps greater than 99%. However, wines made with these hybrid grapes cannot be labeled with the vinifera varietal name and could only be sold either without varietal labels, or blended with wine made from a 100% vinifera varietal. Even if wines made using grapes from transgenic PM-resistant plants could bear the traditional vinifera varietal name, they would probably face significant market resistance because of popular views on genetically modified foods, and would need to go through a substantial regulatory approval process.

For more information about management of powdery mildew, visit the UC IPM website by clicking HERE.

In the table grape and raisin markets, traditional varietal names are not as important, but the potential for market acceptance of transgenic varieties remains uncertain. As with conventionally bred PM-resistant vines, transgenic PM-resistant vines might attract a premium from some buyers because they will require much less pesticide. 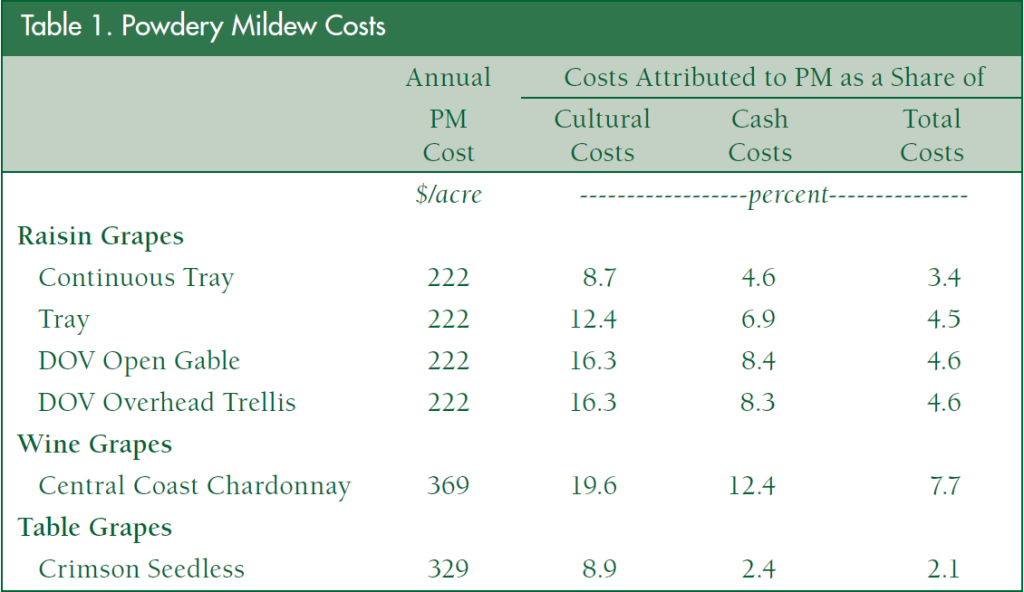 Measures of Costs and Benefits

The introduction and adoption of PM-resistant grapevines will reduce the use of chemical treatments to mitigate PM impacts. To better understand how the reduction in chemical use would translate into potential cost savings, we constructed budgets for hypothetical “representative” vineyards using updated and revised versions of University of California Cooperative Extension (UCCE) Cost Studies. Our budgets show costs of grape production using conventional and PM-resistant vines for each of the three different types of grapes (table, raisin, and wine).

To validate the budgets we created, we discussed them with experts on each type of grape production system in the regions of interest. This group included extension advisors, pest control advisors, academics, and other researchers. This budget validation process was necessitated by the age of some of the UCCE budgets and our specific interest in PM management costs.

Grapes produced in California fall into three main categories: wine grapes, table grapes, and raisin grapes. These three categories make up an industry that contributed over $3.8 billion to the value of California’s farm production in 2011, and much more in terms of total value. Because resources available for the project were limited, we created budgets only for certain varieties and regions within each grape type, chosen to represent the parts of each industry most affected by PM.

Table Grapes. Of the available table grape varieties, we chose to profile Crimson Seedless grapes—the most widely planted in terms of acreage.

Raisin Grapes. We created budgets for the four predominant types of raisin grape production systems: continuous tray-dried, in which grapes are mechanically harvested and dried on a continuous paper tray between rows; traditional tray-dried, in which bunches of ripe grapes are hand-cut and placed to dry in the sun on rows of individual paper trays; and two types of dried-on-the-vine raisin production systems, in which specially designed trellis systems allow machines to harvest already dried raisins.

Wine Grapes. Because of the great diversity in wine grape growing practices and market characteristics, we opted to focus on the variety that is most affected by PM, chardonnay, which is also the most economically important white wine variety. We also opted to focus on a single region, the Central Coast (crush districts 7 and 8) where PM pressures are most severe. 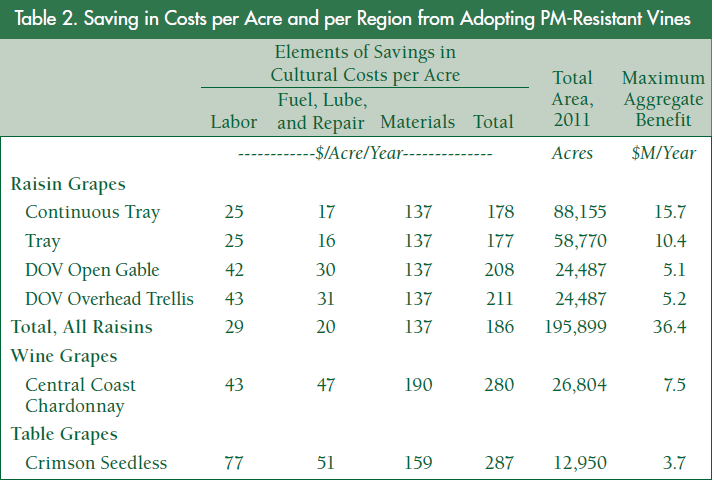 Table 2 shows differences in specific costs of production—labor, materials, and other costs—between various wine grape production systems using conventional and resistant grapes. The difference in cost between the conventional and the resistant system does not simply equal the current cost of PM treatments. Ending sulfur treatments may result in an erineum mite infestation, so we assume a wettable sulfur treatment would be retained to treat the mites. Additionally, some non-PM treatments are typically applied along with PM treatments, so the labor and fuel, lube and tractor repair costs must be attributed to the non-PM treatments in full and can not be eliminated by adopting the resistant varieties.

Cost savings from growing resistant vines versus conventional vary widely over types of grapes being produced. Total annual cost savings range from $177 per acre in the case of traditional tray-dried raisin production, up to $287 per acre for Crimson Seedless table grapes.

We now scale up from the per-acre effects for “representative vineyards” to area-wide effects for the regions we have selected: the Central Coast for chardonnay wine grapes, and the San Joaquin Valley for Crimson Seedless table grapes and all types of raisin grapes. Table 2 presents regional acreage and the total cost savings, by production system, if all growers in the region were to adopt a new, resistant variety immediately.

The largest total potential impact is in raisin grapes, which would save $36.4 million per year if all growers converted all the acreage—195,899 acres in the San Joaquin Valley in 2011—to PM-resistant varieties immediately. The corresponding annual cost savings for Central Coast chardonnay is $7.5 million (on 26,804 acres—less than one-fifth that of raisins) and for Crimson Seedless it is $3.7 million (a high per-acre cost reduction, of $287 per acre per year applied to a comparatively small total acreage of 12,950 acres in 2011).

However, a scenario in which resistant varieties become available immediately and all growers immediately adopt them is extremely unlikely. In reality, these new varieties will not become available for some time, and if growers do adopt them, they are likely to do so when the vines they currently have in the ground come to the end of their productive lifespans and have to be replaced anyway. Hence, we allow for various lags until vines become available, as well as various adoption rates.

We also assume that once the vines become available, adoption will increase slowly until it reaches its maximum, 20 years later. Additionally, growers typically do not begin to apply PM controls until the third year after planting, so benefits will not be felt until three years after the R&D lag is over and adoption begins. 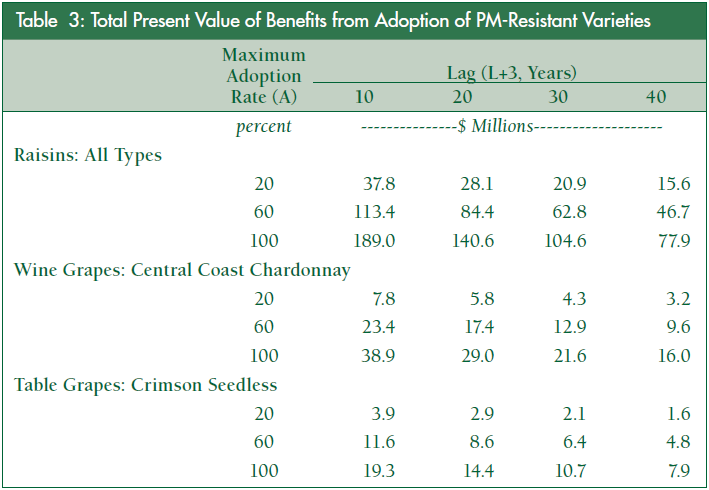 The availability and adoption of PM-resistant varieties would entail environmental benefits as well. Fuel, lube, and repair costs are a measure of tractor use. Since tractors emit carbon dioxide, fine particulate matter (PM 2.5), and a host of other pollutants, curbing their use has been a topic of increasing conversation in the San Joaquin Valley, where table and raisin grapes are grown, and where air quality has become an issue of concern in recent years.

Table 2 shows differences in fuel, lube, and repair costs that range from $16 per acre for traditional tray-dried raisin grape production to $51 per acre for Crimson Seedless table grapes. The implication is that PM-resistant varieties would allow some reduction in vineyard operations with an attendant decrease in ambient pollution.

The reduction in applications of chemical fungicides may also yield benefits to the environment and human health, although much is unknown about these effects. Sulfur, the most heavily used agricultural chemical in California, may cause respiratory illnesses and other adverse health effects. However, the kinds of respiratory effects induced and what types of exposure cause them are unknown. In soil, bacteria slowly convert sulfur to sulfate, which generally does not cause harm. Other (relatively new) synthetic compounds used for PM treatment and prevention, such as sterol inhibitors and strobilurns, have not been reported as having negative environmental or human health effects.

Because of the large volume and frequency of applications, controlling for PM results in the bulk of the environmental impact from grape production, even though the fungicides used for PM control are less toxic to both humans and the environment than many other pesticides. The reduction of these environmental and human health costs is one of the benefits from growing PM-resistant varieties.

Several measures of pesticide risk are available to examine the environmental impact of PM management. These measures include the Environmental Impact Quotient (EIQ), which combines pesticide hazards to farm workers, consumers and the environment, and the Pesticide Use Risk Evaluation (PURE), which is a California-specific index that quantifies the environmental risk to soil, surface water, ground water, air, and bees. Using either measure, sulfur accounts for a large share of environmental risk. Environmental benefits from eliminating PM-related fungicide applications would accrue primarily to workers (reduced potential health risks), and through reduced harm to bees and soil.

Powdery mildew is a common disease that imposes large economic costs on California grape growers. PM-resistant varieties of grapes could yield large economic benefits to grape producers in California—potentially as high as $48 million per year in the subset of the industry covered by our analysis— across wine, table, and raisin grape-producing sectors. Our estimates of the cost savings attributable to PM-resistant varieties range widely across the different grape production systems, with the greatest potential in the raisin grape industry. Within a system, the benefits are quite sensitive both to the R&D lag until the resistant varieties become available for adoption, and to the maximum adoption rate.

On the other hand, we have implicitly assumed prices of grapes grown using PM-resistant varieties would be the same as prices for grapes from the conventional varieties they would replace. Grapes produced using non-vinifera or transgenic vines might well suffer a price discount compared with conventional alternatives, and if the price discount is greater than the cost savings from resistance, then it will not make economic sense for growers to adopt them. Even if it is not prohibitive, any price discount will offset the benefits from cost savings to some extent.