THE MANY USES & SOME MISUSES OF GYPSUM IN VINEYARDS. 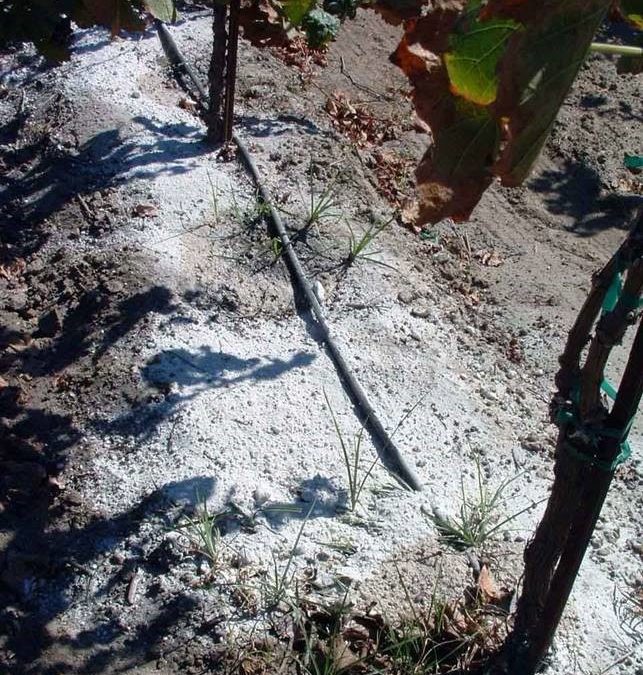 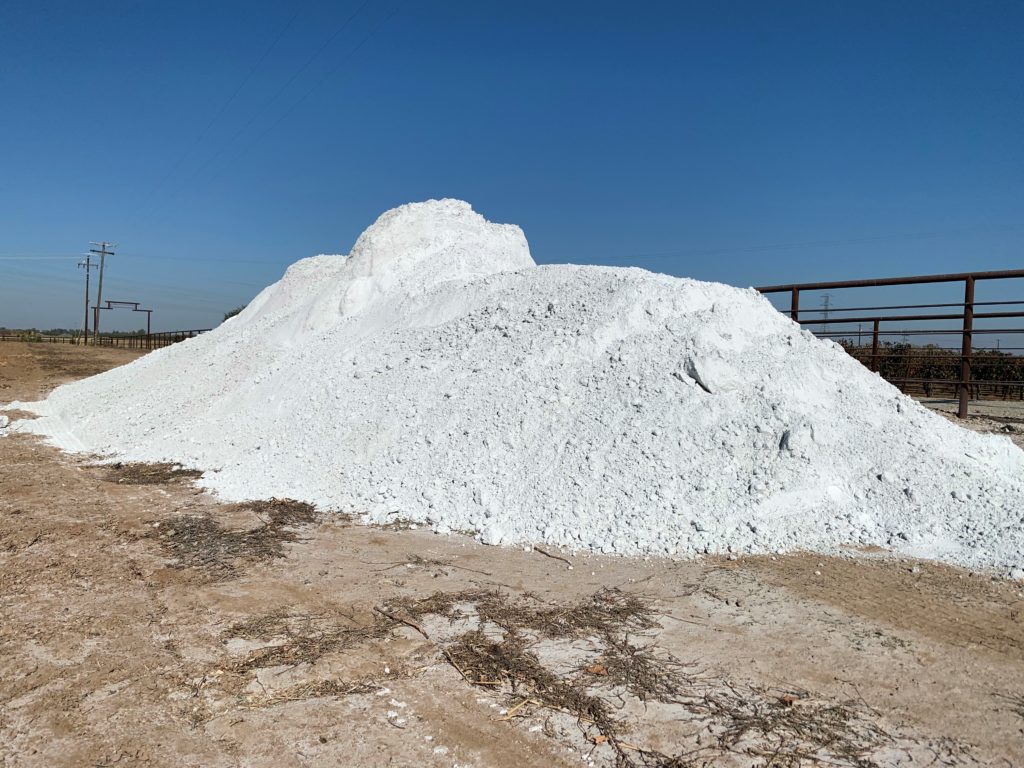 Figure 1. A pile of bulk gypsum beside a vineyard ready for broadcast or band application. (Progressive Viticulture©)

Soil amendments are soil conditioners.  They are mineral or organic materials and their purpose is improvement of the physical, chemical, and/or biological condition of soils for the benefit of plants.  Gypsum is a versatile soil amendment, having many uses for both conventional and organic wine grape vineyards (Figure 1).  It is also the soil amendment most likely to be misused.

Ancient Greeks and Romans applied gypsum to benefit crops.  Much later, Ben Franklin showed the value of gypsum for increasing plant growth, applying it across a pasture in patterns to spell “This land has been plastered”.  As we will see below, the benefits of gypsum are mainly due to the calcium it contains.

Several factors determine the relative quantities of specific cations adsorbed on soil particles, including their rate of release from decomposing soil minerals and their additions with fertilizers, soil amendments, and irrigation water.  Certain percentages of adsorbed cations are desirable for agricultural soils (Table 1). 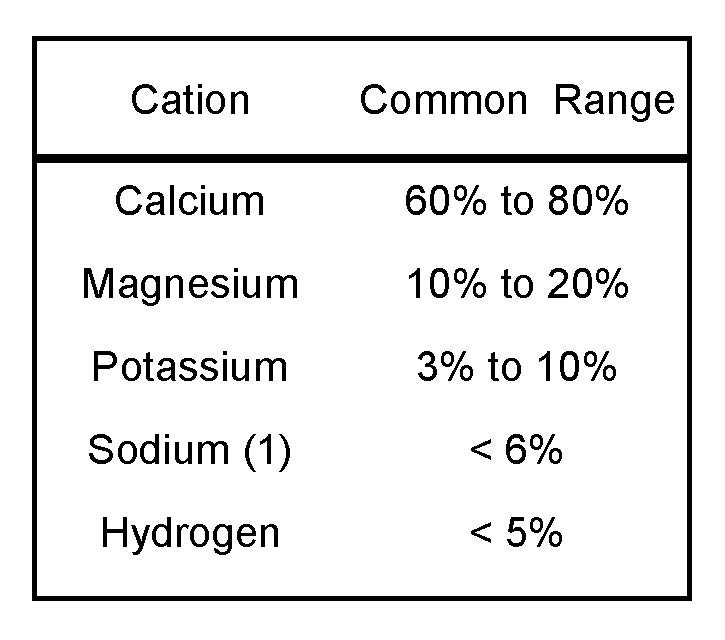 In specific circumstances, soils develop unusual cation ratios in which one or more of the cations are present in excessive quantities relative to the others.  Examples include: (1) high sodium or sodic soils found in drainage basins or where irrigation water is high in sodium, (2) high magnesium soils formed from high magnesium mineral materials originating in the Coast Range, and (3) serpentine soils, which are very high in magnesium and found in certain locations in the Sierra Nevada Foothills and Coast Range.  Unusual cation imbalances can degrade soil structure and porosity, inhibit soil microbial activity, effect nutritional deficiencies, induce mineral toxicities, and restrict grapevine growth and productivity.

Gypsum applications are the most cost effective method for providing large quantities of calcium to bring soil cations into a favorable balance. To be effective, gypsum applications require irrigation water with no significant cation imbalances and unrestricted root zone drainage.

As shown in table 1, quantities of cations adsorbed onto soil particle surfaces are not equal.   Rather, soil particles adsorb larger and more highly charged cations in greater quantities.  Based on its size and charge, calcium dominates cation adsorption in most soils (Figure 2).  Growers can use the preferential adsorption of calcium to advantage to enhance the efficiency of magnesium, potassium, and ammonium fertigations.  Simply apply solution grade gypsum through an agitating machine during the next irrigation to displace previously applied nutrient cations adsorbed onto soil particles and make them available for uptake by roots (Figure 3).

Use caution when injecting gypsum into irrigation water high in bicarbonate (HCO3 ≥ 92 ppm).  Such waters usually require a lowering of pH (≤ 6.5) to avoid drip emitter clogging due to the formation of solid calcium carbonate.  For effectiveness, inject acid upstream of the point of gypsum injection and for all irrigation waters regardless of their bicarbonate content, inject gypsum upstream of the filters. 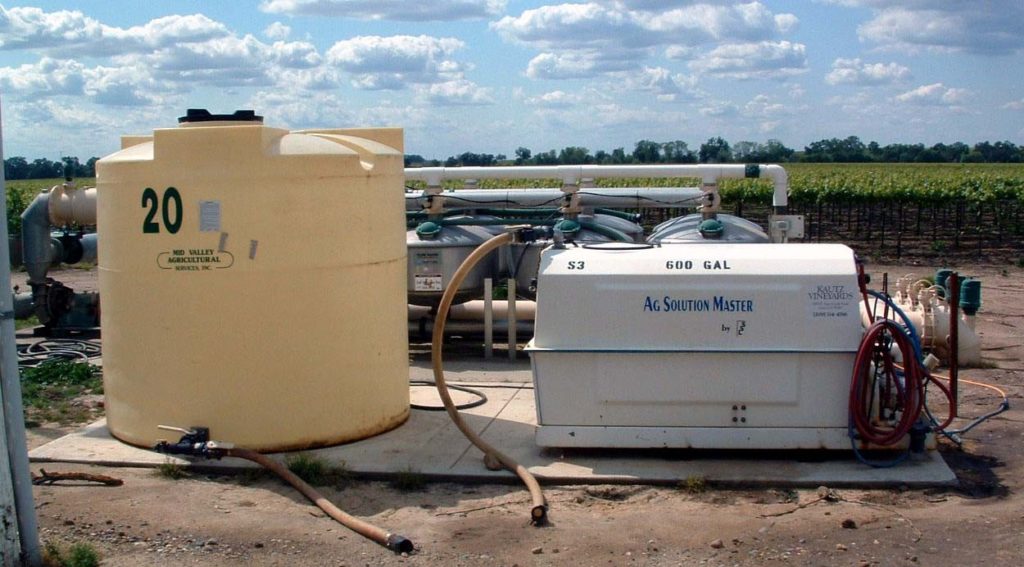 Snowmelt runoff and streamflow from the Sierra Nevada is sufficiently pure to be corrosive to soils (electrical conductivity or ECw < 0.5 dS/m).  When used for irrigation, such water strips adsorbed cations in the upper soil and carries them downward, causing particles in the upper soil to disperse, clay minerals to swell, soil pores to close, and soil surfaces to seal.  These effects reduce irrigation efficiency and increase the risk of grapevine water stress.

Continuous solution grade gypsum injection at low rates is among the safest and most cost effective methods for reducing water corrosivity and avoiding soil crusting and sealing problems.  Further, the calcium it contains is a highly effective soil particle binder and aggregate builder due to its size and charge.  As such, drip applied gypsum has to potential to increase the depth of water penetration in the soil under drip emitters over time.

Some soils in coastal valleys and the Sacramento-San Joaquin Delta contain excessive boron (B ≥ 1.5 ppm).  In these situations, it is difficult to avoid boron toxicity in foliar grapevine tissues, especially under deficit irrigation (leaf blade B ≥ 300 ppm).  Calcium from gypsum decreases the chemical activity of boron, thereby reducing toxicity risk.

While adding gypsum to pure irrigation water is good thing, adding it to saline water or a saline soil is not.  Saline soils contain excessive salts that create energy gradients grapevines have to work against to take up water, predisposing them to water stress (electrical conductivity or ECe ≥ 2.5 dS/m).  As mentioned above, gypsum is a salt.  Therefore, gypsum applications will not correct, but compound soil salinity problems.  The only exceptions may be where soil salinity is mainly due to excessive sodium.

Wrong Use with a Caveat: Soil Acidity and Soil Alkalinity Reducer

Strongly acid soils (pH ≤ 5.5) typically contain excessive amounts of two cations that are present in very low levels in other soils.  They are hydrogen and aluminum.  Although these cations can have toxic effects on vine roots, the chemical environments they create in vineyards soils often have a much greater impact, mainly by depriving grapevines of needed mineral nutrients and limiting soil microbe numbers, species, and activities.

Calcium can displace hydrogen and aluminum in strongly acid soils and certain calcium containing materials, called liming materials, are effective for this purpose.  Gypsum, which has little affect on soil acidity, is not one of these materials.  Similarly, gypsum has a negligible influence on the pH of alkaline soils (pH ≥ 7.5), which lie at the other end of the pH spectrum and are also unfavorable environments for grapevine roots.  Still, gypsum, due to its greater water solubility, can extend some of the effects of slightly soluble lime (calcium carbonate) on excess aluminum deeper in a soil when the two materials are applied together.

Gypsum has fertilizer value as a source calcium and sulfur for grapevines.  However, the release of these nutrients from gypsum is slow compared to highly soluble liquid fertilizers, including calcium thiosulfate (CaTS).  These latter options are more readily available and more predictably meet vine mineral nutrient needs for growth and development than gypsum.

Other Gypsum Use Considerations 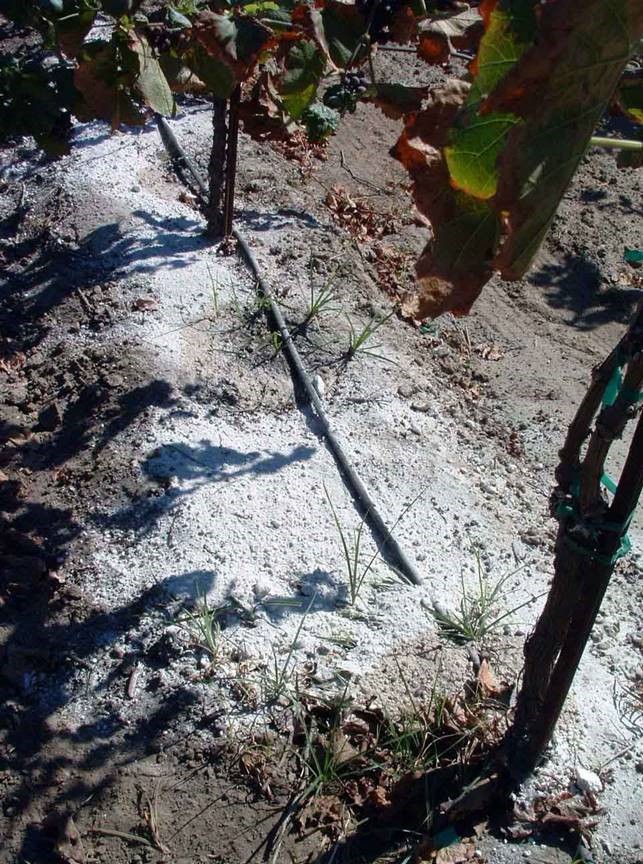 In addition to the correct use, gypsum benefits depend on other factors.  As the content of moisture and impurities increases, the potency of gypsum decreases.  To compensate, correspondingly increase application rates.  Also, specific impurities in particular sources of gypsum can intensify certain soil problems, such as the impurity sodium sulfate on sodic soils.  For these reasons, it is important to verify impurity content prior to purchasing a gypsum product.

The type of gypsum used needs to be appropriate for the application method.  Gypsum used in drip irrigation systems should be very pure, very fine, and highly crystallized to avoid clogging problems.  “Solution grade” is the designation given to gypsum products designed for this use.  Conversely, very fine gypsum, which is so effective in irrigation water, is difficult to apply through broadcast and banding equipment onto soil surfaces.

The most rapid changes in soil characteristics occur when broadcast or band applied gypsum is mixed into the soil.  However, when the objective of gypsum application is to prevent surface crusting, it is usually best to leave it on the soil surface, especially a freshly tilled soil surface (Figure 4).

Gypsum is usually the right material to correct cation imbalances, such as excessive sodium, magnesium, or potassium, and to decrease irrigation water corrosiveness.  At the same time, gypsum is the wrong material to decrease soil salinity, acidity, and alkalinity.  And while drip applied gypsum can increase the effectiveness of some fertilizers, it is a not a high efficiency source of mineral nutrients for grapevines.

A version of this article was originally published in the Mid Valley Agricultural Services October, 2003 newsletter.