If shoot thinning were a book or movie it might be entitled Pruning: The Final Chapter.  Quite simply, shoot thinning, which is the selective removal of shoots, enhances the viticultural effects of pruning and in some ways, finishes the pruning job.  Here we will explore the benefits of careful shoot thinning and how to achieve them.

Fig 1. Shoot thinning bilateral cordons – before (A) and after (B).
Photo source: Progressive Viticulture, LLC ©

Shoot thinning conserves and often, improves the shoot spacing established while spur pruning cordons (Fig 1) or arms on head trained vines.  It similarly sets the shoot density along canes retained as fruit bearing units (Fig 2).  In this way, shoot thinning lays the foundation for the fruit zone microclimate during ripening, especially with regard to air and light movement.  It also aids the penetration of foliar sprays.

Shoot thinning refines the ratio of fruit to leaves that was roughly set during pruning.  Usually, all sterile (unfruitful) shoots are removed during thinning.  This lessens the shoot density with a minimum impact on crop level.  Sometimes, however, it may be desirable to also remove shoots bearing clusters if they are too crowded or too numerous for timely ripening.  As such, shoot thinning is a practice for achieving growth balance. 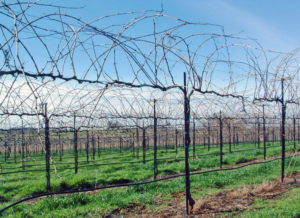 Careful annual shoot thinning can promote uniformity among spur positions.  By removing higher shoots on spurs and arms while retaining lower shoots, shoot thinning keeps spur positions close to cordons, increasing their uniformity with regard to shoot growth vigor and fruit development.  Where arms have crept far away from cordons, retaining a shoot (water sprout) arising from a latent bud on old wood low on an arm sets the stage for arm shorting and spur repositioning next winter (Fig 3).  Using these techniques, shoot thinning maintains vine form, facilitates other vineyard operations, and enables consistency in fruit production and quality. 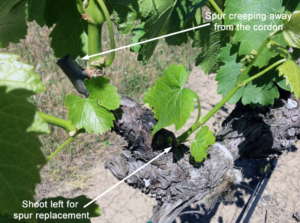 Fig 3. Shoot thinning to replace a spur position that has crept away from a cordon.
Photo source: Progressive Viticulture, LLC ©

Shoot thinning can also enhance uniformity among shoots within the growing season in which it is applied.  To do so, remove the shortest and longest shoots, and retain those of average length.  The effect of thinning to an average shoot length is improved synchronization of fruit development and correspondingly, enhanced grape quality.

Shoot thinning compliments pruning in one other very important way.  Removing shoots during the spring leaves fewer shoots to be pruned the following winter.  This has two outcomes.  First, operational costs are reduced because properly timed shoot thinning is a faster operation than dormant pruning.  Second, the risk of canker disease is reduced because, with fewer pruning cuts during the winter, there are fewer wounds exposed to infection.

Importantly, shoot thinning also reduces water and mineral nutrient requirements and accordingly, their costs.  Further, it makes other, subsequent hand operations easier, like cluster thinning and hand harvest, making them less expensive.  Typically, by diminishing canopy densities, shoot thinning eliminates the need for basal leaf removal.  The exceptions may be varieties with large leaves, such as Chardonnay and Malbec.

Like all cultural practices the most critical questions for shoot thinning are “when?” and “how much?” (i.e. timing and severity).  Early shoot thinning (shoot lengths ≤ 6 to 10 inches) is easier and less costly than later shoot thinning, but later shoot thinning often lessens the risk of leaf and crop loss from springtime environmental hazards such as wind and frost.  Sometimes the decision to thin depends on forecasted weather and other site factors compared to the current shoot length, rate of elongation, and susceptibility of the variety to damage.  Other times it is simply a matter of labor availability and other operational logistics.

A shoot density of about 5 to 6 shoots per foot of cordon normally achieves the benefits stated above.  This frequently corresponds to removal of all shoots except those originating from count buds on spurs.  For cane pruned vines, retain 1 shoot per cane node and 1 or 2 well placed renewal shoots per cane on the head of the vine.  Less severe thinning reduces viticultural benefits.  More severe thinning provides negligible additional benefit with a cost of lowered fruit yields (Fig 4).

In conclusion, shoot thinning is a viticultural practice that compliments pruning and like pruning, shoot thinning is simultaneously both a canopy and crop management practice.  The objectives of shoot thinning are to attain a favorable ratio or balance between fruit and foliage, to promote light and air penetration into the fruit zone, to encourage uniformity in shoot and crop development along the length of a cordon or cane, to avoid canker disease, and to facilitate vineyard operations and control costs.

A version of this article was originally published in the Mid Valley Agricultural Services April, 2001 newsletter.