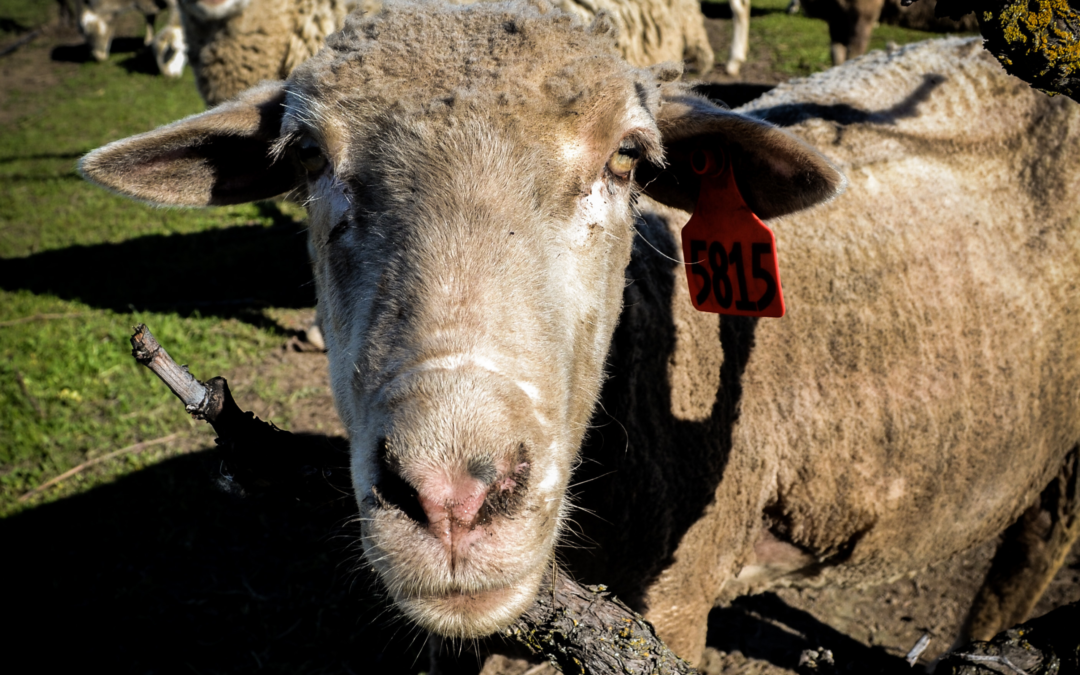 Many examples exist in California and worldwide of diversified farming operations that own sheep and beneficially utilize them in vineyard operations. As an alternative management option, some sheep ranchers offer grazing services for vineyards on an as needed basis. Some Lodi winegrape growers are successfully using sheep grazing services for vineyard floor management of weeds and cover crops and for other operations.

Sheep ranching is part of the history and heritage of many area agricultural families. The use of sheep grazing services maintains a tie to this history while also providing another story line to promote and market Lodi’s sustainable vineyards and wine brands. 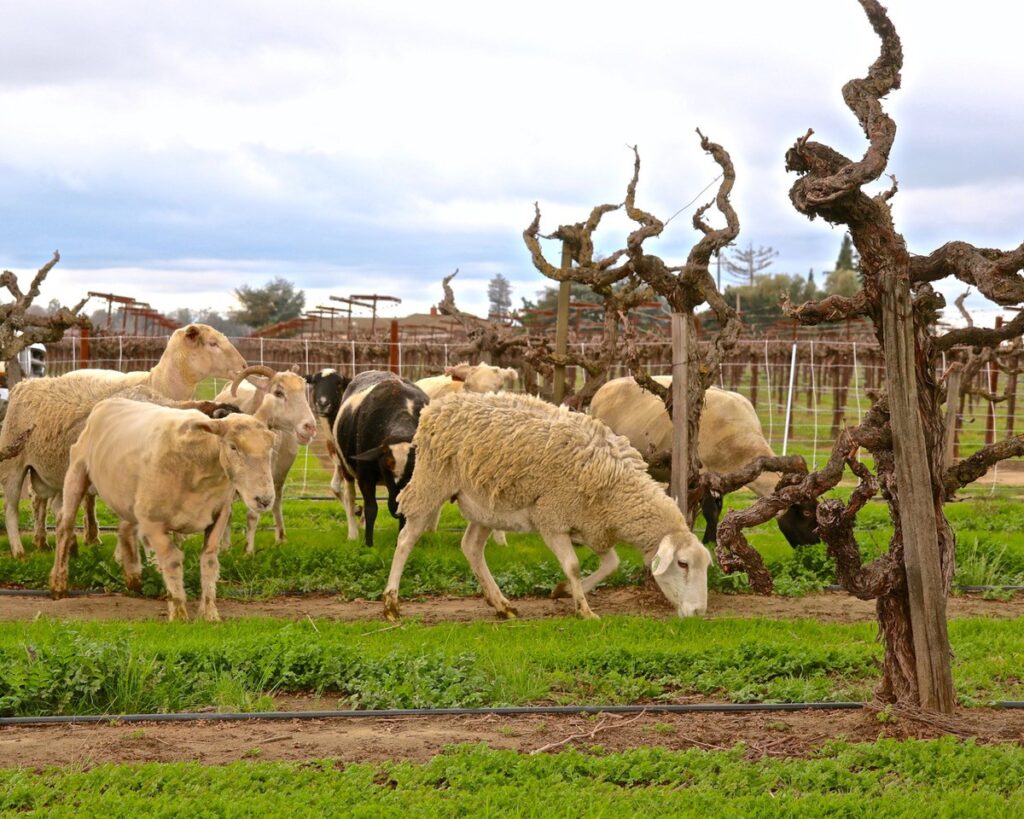 You herd it here first. Photo by Randy Caparoso.

Arburua provides all services and materials required to graze the sheep. He installs portable electric fencing to corral the sheep within a vineyard block that also keeps out predators such as coyotes. The fencing is fully powered with a rechargeable battery to enable grazing in locations where electric power is unavailable, and the vineyard owner incurs no costs to provide power. Arburua provides a stock tank and water for the sheep, provides daily monitoring, and moves the sheep and fencing as needed to complete the work.

The lightweight electric fencing used includes “ElectroNet,” or “ElectroStop” mesh netting material that is fully charged except for the anchor stakes, that are easily installed with little ground disturbance. Once shocked, sheep avoid contact with the fence. ElectroStop fencing stands 42-inches high and is used along roadways and higher traffic areas. Arburua also uses a simpler barrier with three strands of electrified poly wire strung from reels onto stakes.

Arburua produces sheep for meat production with four breeds commonly used for meat rather than wool: Suffolk, Dorset, Rambouillet and Dorper. The majority of his herd gives birth in February and March, and lambs are sold at about 6 months old, weighing 120 to 140 lbs., mostly to Superior Farms in Dixon. The Dorpers are an exception, able to breed and give birth year-round. F Ewe Sheep Company’s mission statement reads, “To develop the most genetically sound herd, provide the highest quality meat, while offering the most natural and effective weed abatement service possible.”

The Lodi Winegrape Commission (LWC) hosted a grower field day in February 2021 to demonstrate sheep grazing at Schulenburg Vineyard in Lodi’s Mokelumne River American Viticultural Area (AVA). Schulenburg produces 18 acres of Zinfandel—six acres of 70 year-old head-pruned vines, and 12 acres of 30 year-old trellised vines. All production is sold to Michael-David Winery. The Schulenburg Family purchased the property in 1977. The vineyard is managed sustainably by Wendy Schulenburg and her father Robert and has been LODI RULES certified since 2008.

Arburua placed sheep at Schulenburg around mid-February in 2021, first in the old vine, head-pruned block, with fencing around five acres at a time with up to 100 sheep per five acres.

Weeds at Schulenburg have historically been managed with one dormant season pre-emergent herbicide spray in the berms under the vines, with the row middles mowed in the spring. Weeds are primarily Filaree (stork’s bill) and native grass cover. Wendy Schulenburg said, “As a sustainable operation, we’re trying to eliminate the use of herbicides and reduce pesticide use. The sheep are doing a good job, and we haven’t used herbicide or mowed this season.”

Describing the grazing service, she said, “It’s a win-win situation. The sheep are getting fed and we’re getting weed control and good compost added back to the soil. We’re also saving costs on labor and materials used in spraying and mowing operations.”

Arburua offers grazing services to Lodi vineyards for three types of seasonal operations: winter/spring weed control prior to budbreak; early season trunk suckering, shoot tip and leaf removal depending on vineyard design; and post-harvest cleanup to remove vine leaves and provide vineyard floor and berm sanitation of weeds and vegetation. Arburua says, “Sheep love to eat, all day, every day.” Recognizing that his service is a mutually beneficial relationship between himself and the vineyard owner, Arburua prices services below what the vineyard owner would pay for labor for the same operation. The cost of sheep grazing for weed control at Schulenburg was $25 per acre. 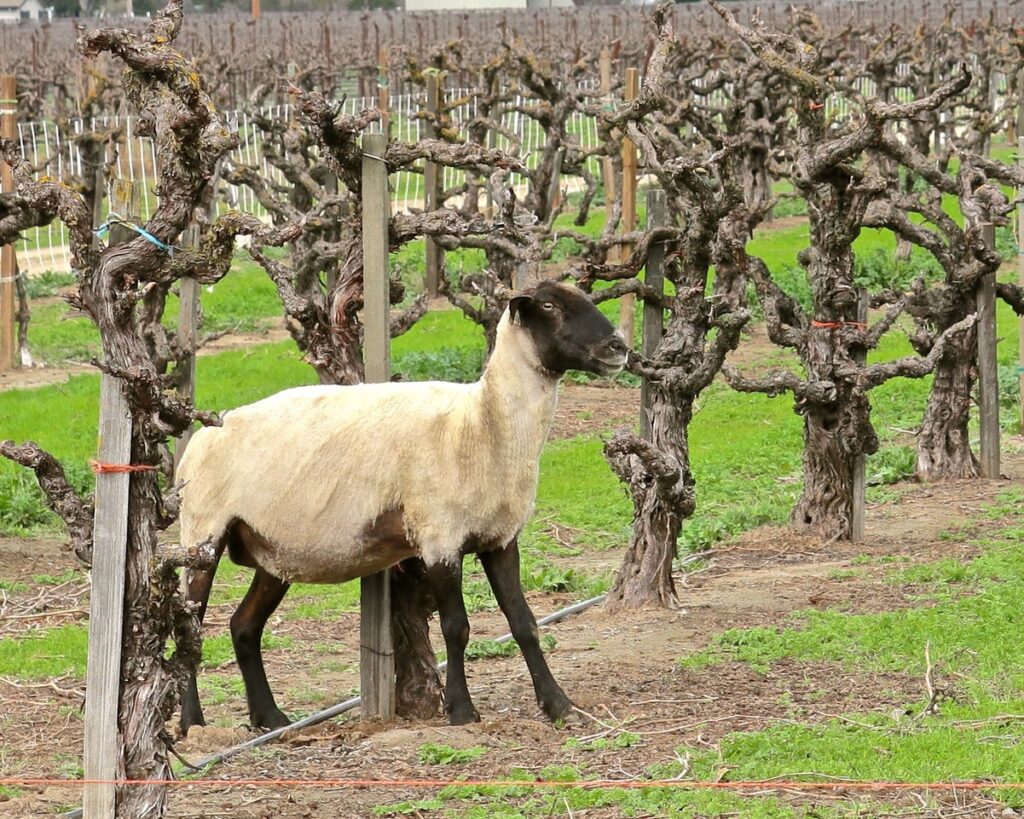 Where do sheep get their wool cut? At the baa-baa. Photo of a recently shorn Suffolk by Randy Caparoso.

Charlie Hamilton is a licensed pest control adviser (PCA) for vineyards and other crops in the Lodi and Clarksburg AVAs and a member of the LWC LODI RULES Committee. He is the fifth-generation of a sheep ranching family operating since the 1860s in the Delta region’s Montezuma Hills near Rio Vista. In 2016, he became a first-generation winegrape grower when he and wife Brittany established the 50-acre Pressley Vineyards in the Montezuma Hills with sheep integrated into the vineyard’s management. Pressley Vineyards is LODI RULES certified, producing Pinot noir and Albariño.

The vineyard is surrounded with permanent fencing to manage for sheep, and the vines are trellised with 42-inch high cordons with most vine growth above grazing level. Cover crops are planted between rows. Sheep control weeds, mow cover crops, and provide post-harvest vineyard floor sanitation by removing debris and dry weed carcasses from the berms. The sheep reduce labor and herbicide spraying, although one winter herbicide spray pass is still usually needed.

Hamilton observed: “Integrating sheep into vineyard operations increases the tools in the grower’s tool box and enhances sustainability. Having agricultural biodiversity on a region-wide basis is important in an area like Lodi, as it helps break up the monoculture.”

He said sheep manure is a natural, raw form of compost that feeds different soil microorganisms to improve soil health and diversify soil microbiota. Sheep grazing is an important part of Hamilton’s heritage and provides a point of differentiation to promote Pressley wines. “By using sheep in our vineyard, it ties our brand with our past and our future, and continues an integration with our family history,” Hamilton said.

Hamilton’s family operates Hamilton Brothers Ranch in Rio Vista that sells lambs used for high-end meat brands such as Niman Ranch and Sonoma County Meat Company. The company provides sheep grazing services for nearby Delta vineyards and prefers to work with larger acreages where a large number of sheep can graze for several weeks.

Lodi-based Vino Farms has used sheep from Hamilton Brothers for post-harvest cleanup in Delta vineyards since 2019. About 180 sheep grazed for three weeks in 2019 to clean berms and manage Bermudagrass and Johnsongrass in a 400-acre vineyard on Ryer Island where weeds were not well controlled during the summer. In 2020, sheep grazed a 200-acre Isleton vineyard with even better results when the sheep were brought in earlier–within two weeks after harvest following post-harvest irrigation.

Viticulturist Chris Storm observed, “The sheep remove leaves on vines, and do a good job cleaning the berms and vineyard floor, knocking down vegetation that can get out of hand in heavy Delta soils. The vineyard is less overwhelming to manage after the sheep get done.” He added, “This is very cost-effective, and we intend to expand this post-harvest grazing practice to other vineyard sites as logistics allow.” Storm also plans to use sheep in Lodi vineyard blocks transitioning to Biodynamic certification to integrate an animal grazing component into this management system.

Diego Olagaray of Olagaray Brothers & Twin Vines is a second generation Lodi farmer and winegrower who grew up in the sheep business, learning from his father, a Basque sheepherder who immigrated to California in 1951. When the family started growing winegrapes in the 1990s, sheep were incorporated into vineyard operations for weed management, cover crop mowing, and trunk suckering. Vines were trained on a 60-inch high, quad trellis system that allowed the sheep to be left in the vineyard later in the spring for grazing, even after budbreak. 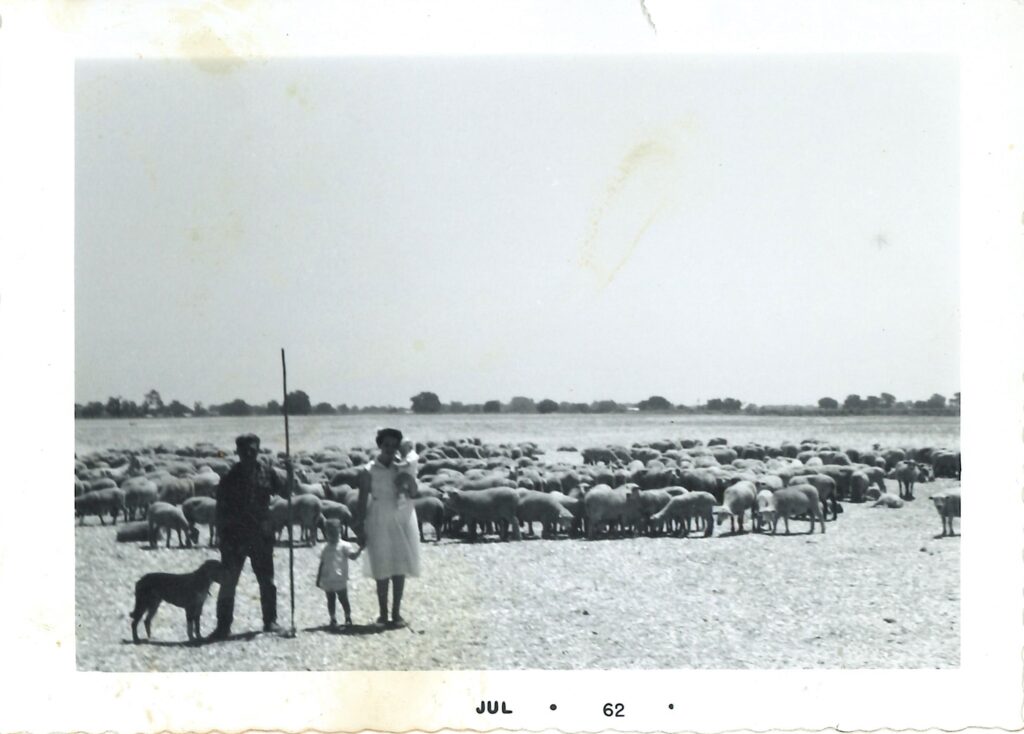 Diego Olagaray (held by his mother) with sheep in 1962. Photo courtesy of the Olagaray family.

The family later got out of sheep ranching for economic and management reasons and focused on winegrapes and other crops. However, Olagaray said, “For the time we did it, it worked well. Certain vineyards are better suited for grazing, such as those with high-cordon and high-wire trellis systems. Sheep are good at keeping the vineyard floor mowed, and they convert weeds to natural organic fertilizer.”

Because the highest cost for the sheep service provider is transporting sheep to the vineyard, it can be more cost-effective to schedule as much acreage as possible for grazing at the same time. Neighboring vineyard owners can potentially work together to coordinate grazing schedules to reduce transportation costs.

The number of sheep used on a site varies based on the acreage to be grazed, the size and amount of vegetation to be cleared, and how quickly the job needs to be completed. A higher number of sheep can eat weeds in a shorter time period.

Generally, most weed and cover crop species found in Lodi vineyards are safe for sheep and will be consumed and chewed to ground level. Arburua says mustard (Brassica) and Filaree (Erodium spp.) are common weed species in Lodi that sheep favor. Olagaray said Filaree is a nutritious food source but cautions that once it goes to seed and dries into its seed form—a spiny coil with a sharp point—these can potentially penetrate into sheep wool and skin. Thus, Filaree should be grazed when the plant is green before going to seed. Many cover crop plants have high nutritional value for sheep, and when converted to manure provide nutrient rich soil fertilizer. Sheep urine is also high in favorable soil nutrients.

Vines should be mature enough, with woody tissue that will not be attractive for sheep to eat or that can be easily broken. Generally, vines should be established and vineyard infrastructure should be securely in place. Sheep can potentially, but uncommonly, cause physical damage by rubbing and scratching against vines and trellis systems.

High-wire trellis systems, installed for mechanized operations, are well suited for grazing, with vine growth above grazing level to allow grazing later into spring. In trellised vineyards, sheep graze up and down the row. In non-trellised old vine vineyards, sheep can move between rows. Sheep are unlikely to chew on irrigation drip lines. However, depending on the height of the drip line, if a sheep tries to move under or over hoses to go between rows, there is potential to loosen or move the hose out of place. At Schulenburg’s old vine vineyard, drip lines on the ground surface in the vine row were no problem for sheep grazing.

Based on Olagaray’s experience, soil compaction is not an issue with sheep in vineyards. He says other livestock can cause more soil compaction. Arburua observed, “As long as the grazing site is not overstocked, compaction is not a problem. Sheep eat and move through a site pretty fast, so they don’t spend a lot of time in one place.” Sheep use can reduce the number of equipment passes needed per year that contribute to soil compaction. In addition, sheep may be able to graze under wetter soil conditions when it is impractical to enter the vineyard with equipment.

This blog post can be downloaded as a PDF newsletter article here: Lodi Winegrape Commission In the Vineyard – Sheep.