SELECTING A ROOTSTOCK FOR A WINEGRAPE VINEYARD

For over 130 years, rootstocks have been available to protect grapevines form soilborne pests. From the beginning, rootstocks have displayed varying influences on the composite grapevine created by grafting. These include influences on grapevine growth, fruit yield, and other viticulturally important vine attributes. During this time, researchers have chronicled many rootstock influences in field trials and controlled environments, and the published record of their findings is extensive (see selected works in the Further Reading section below).

And yet, in spite of the long history of rootstock use and research, selecting a rootstock remains a dubious business due to uncertainty about rootstock influences for any specific vineyard situation. At the same time, the implications of a rootstock selection for a vineyard enterprise are profound, as they include long-term impacts on productivity, efficiency, and profitability. In this article, we will systematically examine important considerations in the rootstock selection process.

The primary purpose of rootstocks is protection from soilborne pests. So, logically, this is the first consideration in rootstock selection. Almost all commercially available rootstocks have sound resistance for Phylloxera, the common insect pest in vineyard soils. Any rootstocks that do not have Phylloxera resistance are well known (e.g. AxR#1) but seldom used.

Many soils also harbor plant parasitic nematodes, which are microscopic worms. There are several types of parasitic nematodes, including both free-living (ectoparasites) and those that spend part of their lives in vine roots (endoparasites). To date, no rootstock can tolerate all types of nematodes and only a few rootstocks can tolerate most (Figure 1). These include Freedom, RS-3, and RS-9. Where root-knot nematode (the most common endoparasite) populations are high, Dogridge and Salt Creek are additional rootstock options. The rootstocks 5BB, SO4, and Schwarzmann, due to their moderate resistance, are suitable for many soils supporting only free-living nematodes.

Over time, soilborne pests adapt to resistance mechanisms in rootstocks, which reside in the rootstock’s genes. For this reason, when replanting a vineyard site, it is best to choose a rootstock with a different and new genetic composition (Tables 1 and 2) than the previous rootstock. For instance, if you plan to replant a vineyard that is currently on 101-14, then you would avoid 3309 or Schwarzmann as replacement rootstocks because they are hybrids with similar parentage to 101-14. When in doubt, consult with your nursery of choice.

Usually, the influence of rootstocks on grapevine growth vigor and mature vine size is the second consideration when selecting a rootstock (Table 3). On deep, well-drained and fertile soils, vines on most rootstocks are more vigorous and larger than ungrafted vines. And a few rootstocks, like Dogridge and Salt Creek, are extremely invigorating. There are, however, some rootstocks that are somewhat devigorating, including 420A, Schwarzmann, and 161-49C. On deep and fertile soils, these rootstocks are a good match for highly vigorous varieties, like Syrah, Sauvignon blanc, and Chenin blanc. They are also the most appropriate rootstocks for high-density plantings. 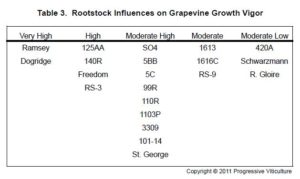 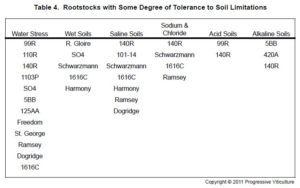 Among rootstock selection considerations, the scion variety grafted on top of a rootstock is just as important as the soil below a rootstock. In fact, the scion variety usually has a greater influence on the composite vine than the rootstock. Apparently, the carbohydrates and hormones produced in the top of vines are more important to overall vine function than the mineral nutrients taken up and the hormones synthesized in the bottom of vines. As a consequence, experiences with a specific rootstock may not be transferable from one variety to another.

For example, on a deep clay loam soil, Schwarzmann had a marked devigorating affect on Viognier, while having a negligible influence on the growth vigor of Sauvignon blanc. During this part of the selection process, seek the guidance of others experienced with the variety you plan to plant, including fellow grape growers and farm advisors.

One important interaction of scion and rootstock involves the Bordeaux varieties, including Cabernet Sauvignon. They have a tendency for erratic budbreak and shoot emergence, frequently leading to blank spaces in the centers of cordons. This tendency is exacerbated by most rootstocks with V. berlandieri x V. rupestris parentage, including 1103P and 140R.

The virus status of the scion variety and clone is the final consideration in rootstock selection. When using non-CDFA certified clones or clones of uncertain virus status, avoid 3309, Freedom, and 5BB. Vines on these rootstocks commonly display more severe disease symptoms than vines on other rootstocks. Of course, using only CDFA certified plant materials, which greatly decreases the risk of harmful virus diseases, is always the most prudent option.

In summary, select rootstocks based on soil pests, other soil limitations, and the scion variety and clone (see Rootstock Selection Chart, below). Several less known, but commercially available rootstocks, were not mentioned in this article. Our lack of knowledge about them represents lost opportunities to further fine-tune our rootstock selection options for the best possible match with our scion variety, soil, and vineyard management objectives. After over 130 years, the need for rootstock research is still with us. 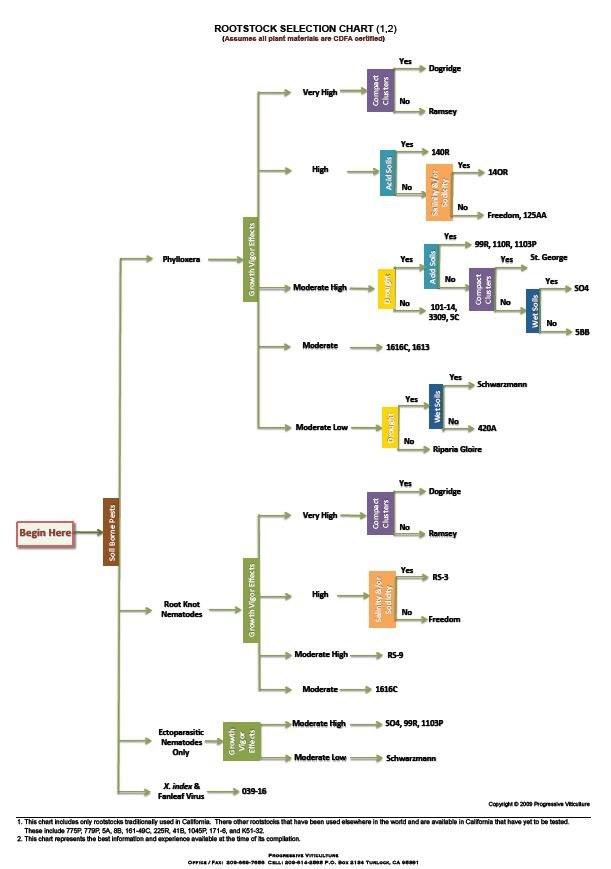 This article was originally published in the Mid Valley Agricultural Services October 2009 newsletter. Article was updated for this blog post on 10.4.16.

Cirami, RM. Interaction of Semillon clones with vine rootstocks (Does the clone of the scion affect the performance of the grafted vine?). The Australian Grapegrower and Winemaker. pp. 150-151. Annual Technical Issue. 1993.

McCarthy, MG; Cirami, RM. The effect of rootstocks on the performance of Chardonnay from a nematode-infested Barossa Valley vineyard. Amer. J. Enol. Vitic. 41:126-130. 1990.

Williams, LE: Smith, RJ. The effect of rootstock on the partitioning of dry weight, nitrogen, and potassium, and root distribution of Cabernet Sauvignon grapevines. Am. J. Enol. Vitic. 42:118-122. 1991.