Deficit irrigation refers to the practice of applying less than the full amount of water a vineyard can use.  The objective of deficit irrigation is to induce and sustain moderate water stress that arrests shoot growth and limits fruit growth without impacting foliage health and sugar accumulation.  This is possible because shoot growth and berry growth are more sensitive to water stress than sugar accumulation.  Deficit irrigation reduces irrigation costs and bunch rot, but also improves fruit quality through increased fruit acidity, lowered pH, and increased phenolics (color, aroma, flavor, and astringency).  Many wineries promote deficit irrigation because the fruit quality benefits translate into higher quality wines that effectively compete in the wine market.

This is the first of a two part series on regulated deficit irrigation by Stan Grant. Part II will be posted on August 4th. 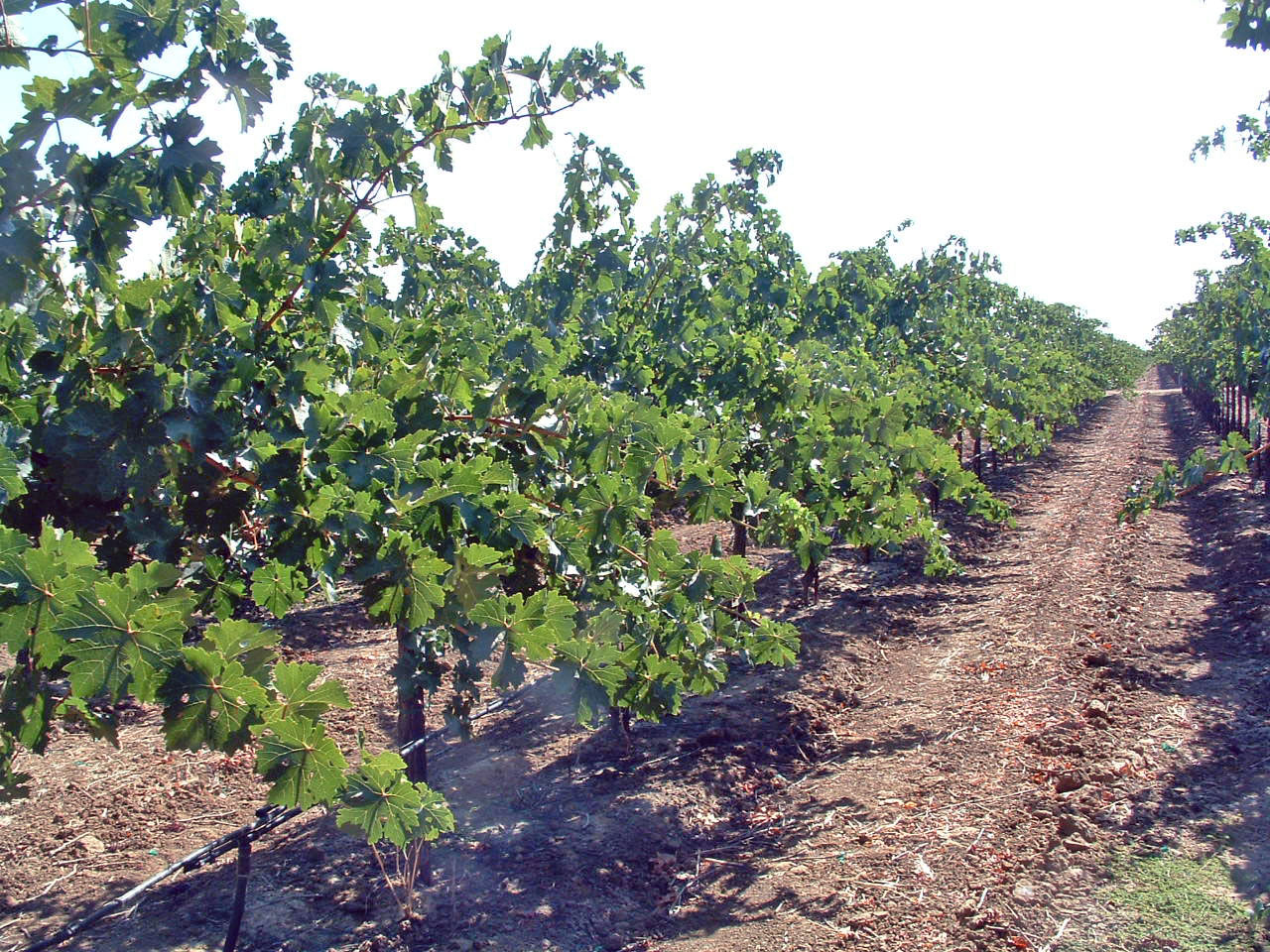 Successful RDI also requires that early in the season, prior to imposing water stress, vines have access to sufficient soil moisture to produce fully developed canopies (14 to 20 nodes per shoot)(fig 1).  In addition, it requires that after harvest until the first frost, vines have access to sufficient soil moisture to relieve stress and maintain healthy leaves, which is critical for producing and storing carbohydrates for use early in the next growing season.  Therefore, a sustainable RDI strategy involves minimum water stress prior to fruit set, moderate water stress from fruit set to harvest, and minimum water stress following harvest.

A version of this article was originally published in the Mid Valley Agricultural Services’ May 2002 newsletter. 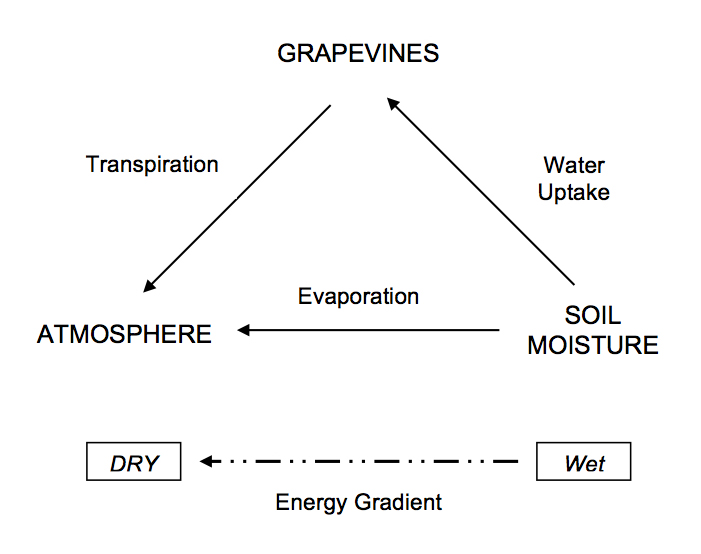 During the growing season, successful RDI implementation requires monitoring of the moisture continuum that extends from the soil either directly to the atmosphere or through the vines to the atmosphere (fig 2).  Of course, within the continuum our primary focus is the vines.  Their condition and appearance at any particular time during the growing season relative to the state we expect or want is the primary consideration for our irrigation scheduling decisions. 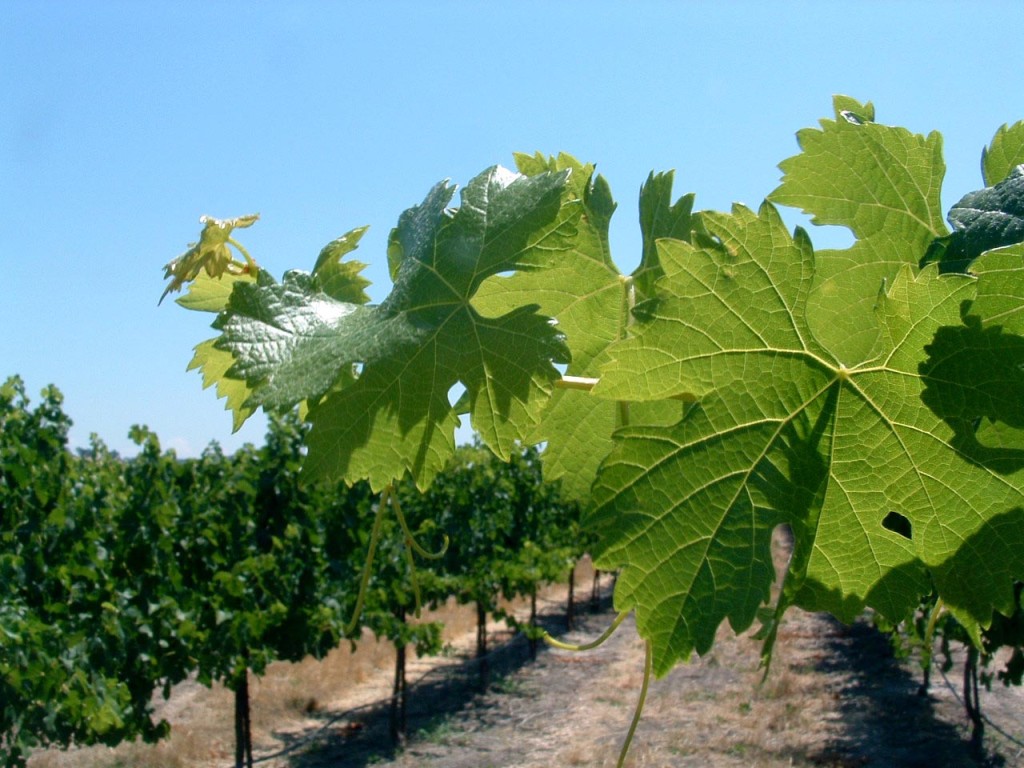 Early in the season shoots should have a moderate growth rate and leaves should be normal in size.  After reaching full canopy, suspend irrigations or continue to withhold them to arrest shoot growth, which is evident in pale shoot tips, short internodes near the tips, obscuring of the shoot tip by apical leaves, and possibly, slight tendril and petiole wilting during the warmest part of the day (fig 3).

Once shoot growth has been arrested, RDI is practiced to sustain foliage without renewed shoot growth (fig 4).  Basal leaf yellowing or scorching indicate severe water stress and the need for increased irrigation.  Before such leaf damage is readily apparent, leaves may appear slightly wilted and exposed leaf tissues may be warm and appear faded.

Development of full canopies, arresting of shoot growth, and imposition of moderate water stress should occur shortly after bloom to achieve the maximum fruit quality benefits from RDI.  Later timings will still render beneficial effects, but they are somewhat diminished.

In the next posting, we will discuss the other components of the soil-vine-atmosphere continuum and irrigation scheduling after shoot growth has been arrested. 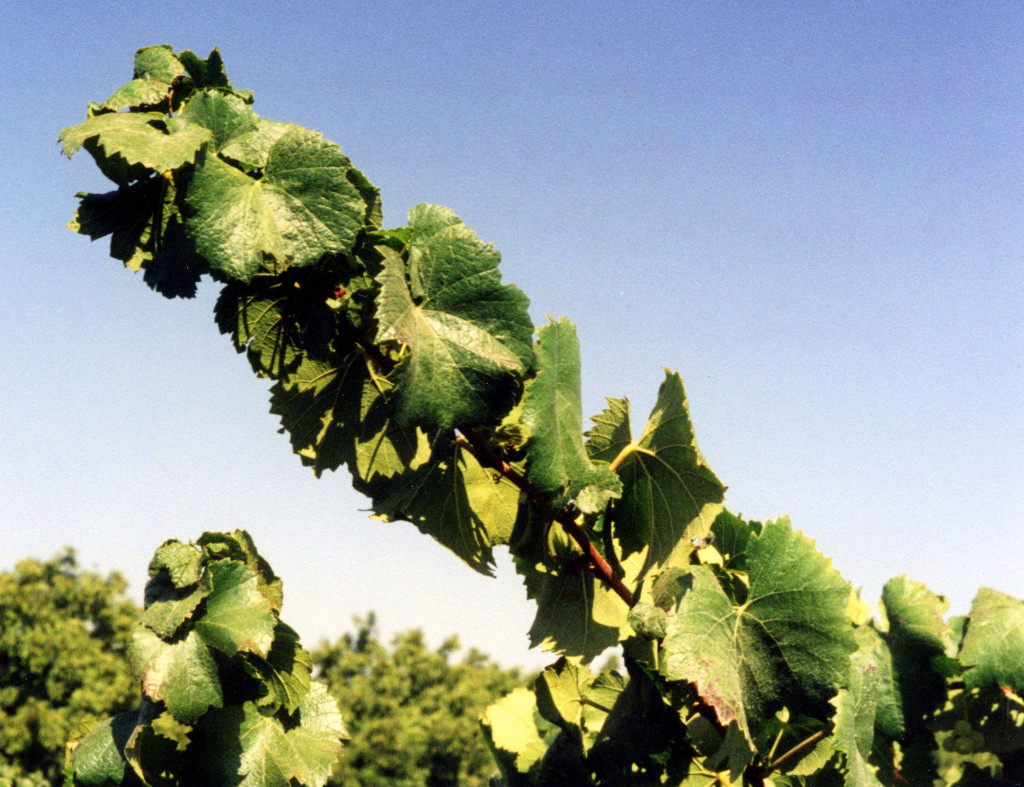