As the 2016 El Niño returns after a month hiatus, much progress is being made towards a Drought Recovery. February had only 0.6 inch of rain, but the first two weeks of March brought 5.2 inches of rain, exactly double the long term average.

Good rains in January wetted the soil profile well enough to get thorough a dry February, with the possibility of more frequent rains in March as it begins. The rainfall total for the months of October, through January ended up at 10.7 inches for North San Joaquin County and slightly less for the South County.

Recent rains should help delay the need for in season irrigation to mid or even late spring, depending on further storms. But checking out the irrigation system is neither a bad idea nor a waste of time. And the lack of urgency may provide the opportunity to evaluate the uniformity and efficiency of irrigation systems, as you wait to “pull the trigger”.

Besides the good soil moisture there was very good accumulation of chilling hours, more so than the last 10 years. The combination of good moisture and good chilling seem to be encouraging a uniform and strong budbreak, in addition to possibly enhancing the final development phases of this year’s fruit buds.
Chardonnay budbreak occurred on March 2 in the vineyards I routinely monitor each year since 1986. That is about three days later than last year, but still 10 days ahead of long term average. Zinfandel vines are beginning to swell and burst as of March14. With good soil moisture, good winter chilling and warming weather, most all varieties should be following quickly and strongly.

Although the last two years have been record early and nearly so, the long term pattern has been; there is no pattern. Date of Budbreak also occurs very unpredictably. Much in the same way that California rainfall, is predictable: always one year away from drought and one year from flood. 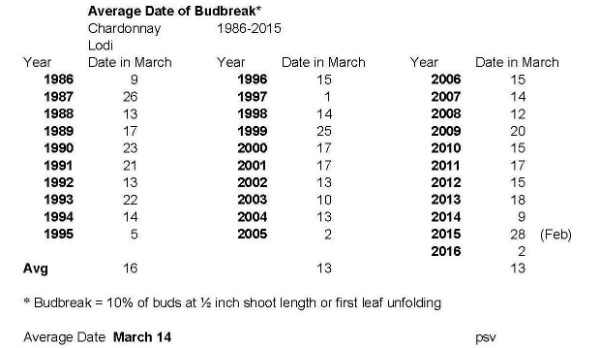 High rainfall springs often bring the chance of cold air masses following the initial rain event. That means growers try to prepare themselves, if not vineyard conditions, to minimize cold effects.
During the last 5 years there were some scattered frost or hail events in 2015 (hail), 2011, 2009 and 2008. Short of wind machines or full coverage sprinklers, there are a few limited but helpful things to consider. As a review see below for soil conditions and cold effects:

Weed growth was minimal during February, but recent rainfall and warm temperatures have encouraged their resurgence. Good weed control should be still achievable and there are some newer materials available. However, it is more important than ever to be ahead of weeds producing seed and hit them while small in size to avoid resistance development and reduce costs. Rotation of herbicides for particular weed species continues to be important and should be considered. If you have related questions, check in at www.ipm.ucdavis.edu or www.wric.ucdavis.edu .

It has been a few years since there has been a rainy and wet spring. This might be the year to be prepared for a reappearance of Phompssis Cane and Leafspot and/or Bortytis Shoot Blight, and even some Downy Mildew (Plasmopara viticola) along with the usual suspect of Powdery Mildew. Until 12 to 18 inches of shoot growth Phomopsis can infect the basal portion of shoots, weaken them and result in breakage with loss of fruit.

Grenache is one the most susceptible wine varieties and French experience indicates Colombard, Cabernet sauvignon and Petit verdot can be somewhat susceptible. Most other wine varieties are moderately sensitive to only slightly so, such as Zinfandel, Chenin blanc, Merlot, Sauvignon blanc, and Tannat. The old Flame Tokays and Thompson Seedless are very susceptible to Phomospis and can be indicator vines if you have some around the house or shop. Botryits shoot blight and flower cluster infection, leading to Bunch Rot later should be monitored in Chardonnay, Chenin blanc, Zinfandel, Petite Sirah, Syrah, Muscats, and Symphony. Check UCIPM at www.ipm.ucdvis.edu for details of control or management.

And of course be aggressive in Powdery Mildew control, even though rain actually kills the fungus, cool humid conditions can encourage rapid sporulation. Downy mildew (Plasmopara viticola) is not a “California problem”, but we have seen it in wet years (1998 and 2006) in sensitive varieties such as Barbera and Chenin blanc.

For a change, no new pests have been identified in local vineyards, but Vine Mealybug (VMB), Light Brown Apple Moth (LBAM), Virginia Creeper Leafhopper (VCLH), Spotted Wing Drosophila (SWD), and Brown Marmorated Stink Bug (BMSB) continue to establish throughout the district and state. So be on the look out to stay ahead of new infestations. BMSB is still a question mark, but research indicates some possible biological control. Along with good monitoring and several available control materials growers and PCAs seem to be ahead of problems.

Be sure to be up to date in Regulatory Compliance concerns such as filing a Farm Evaluation plan with the San Joaquin Count & Delta Water Coalition, by June 1, 2016. Also a Nitrogen Plan is required, but you only have to keep it on site at this time. Check details at www.sjdeltawatershed.org

After all the serious how about a Haiku for Fun:

The bartender said
to the neutron, “For you, sir,
there will be no charge.”