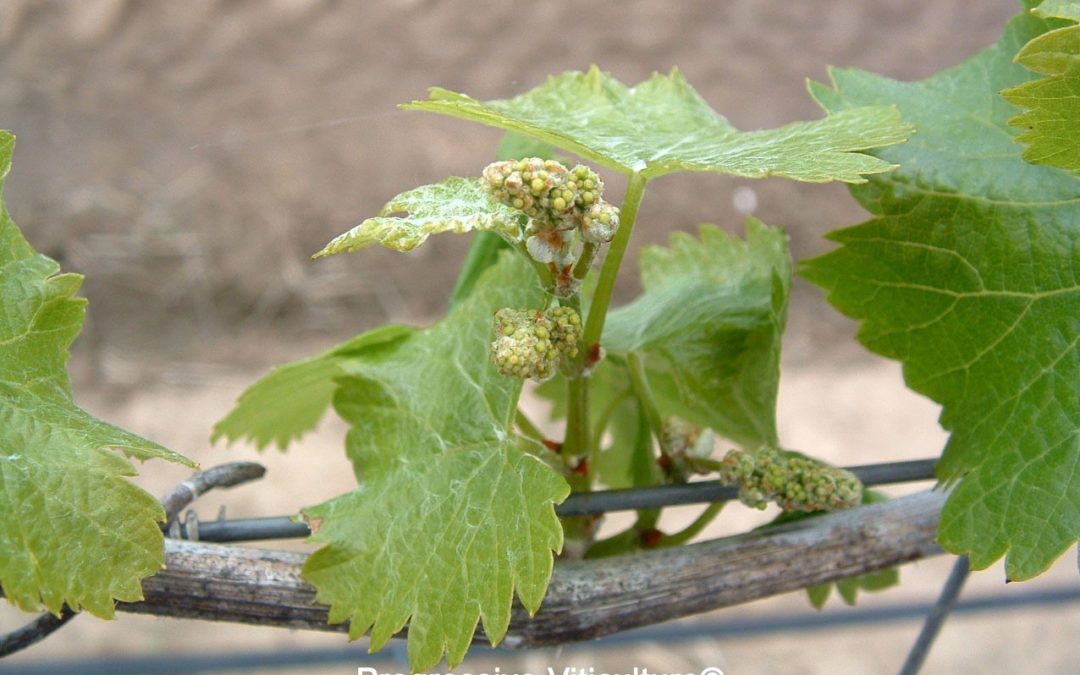 All season long, the focus of those of us involved in the winegrape business has been producing an economically viable crop that meets or exceeds winery expectations. Naturally, we feel greatly relieved after the winery has received the fruit. And while it is tempting to make personal down time our first order of post harvest business, we should not neglect the sources of our income – our vineyards. For the vines, too, have worked hard and they need to prepare for the next growing season, which for them begins immediately after the fruit is off. To best help them, we have at least four important and somewhat interrelated vineyard management goals to achieve before the first killing frost and subsequent leaf fall. Measures taken to meet these goals are the topics of this article. 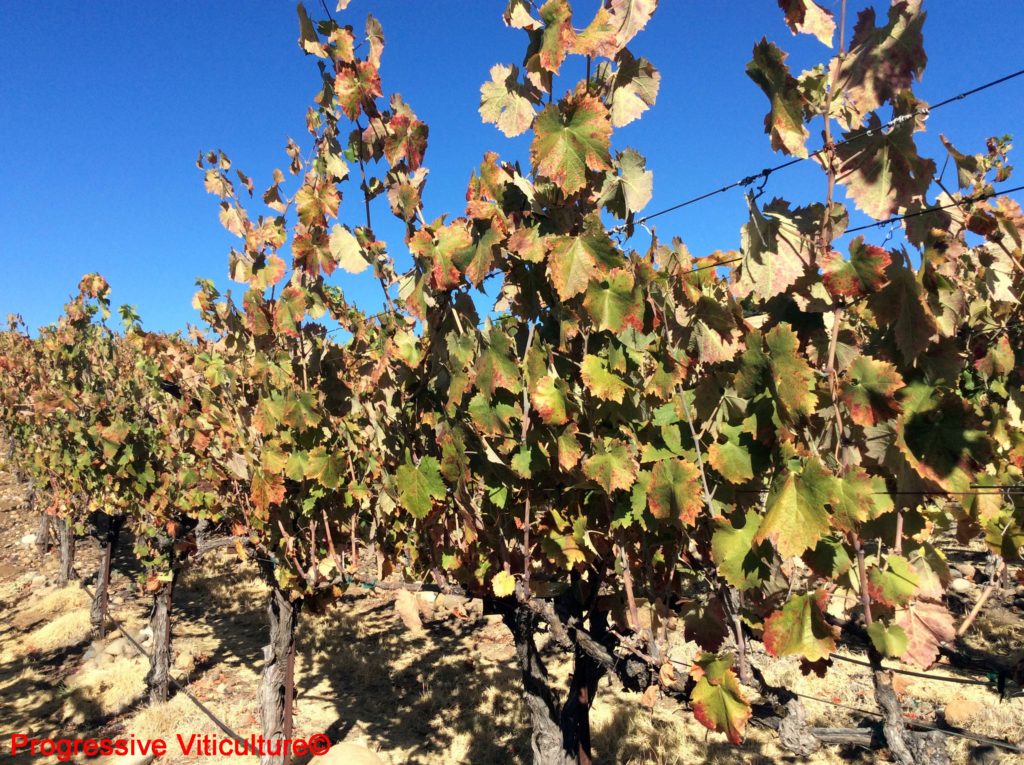 A growing and ripening grape crop places significant demands on a grapevine and the resources available to it. By harvest, canopies are worn and often, somewhat senescent as a consequence (Figure 1). Canopies may also bear a certain amount of damage due to pests, heat, UV radiation, water stress, and nutrient imbalances. Further, mechanical harvesting invariably results in partial vine defoliation. These factors reduce a vines capacity to function, including preparing itself for the next growing season.

Therefore, the first goal of post harvest is stress relief and canopy rejuvenation. To achieve it, discontinue regulated deficit irrigation schedules and liberally irrigate. Crop coefficients rapidly change late in the growing season, complicating evapotranspiration (ET) based irrigation schedules and oftentimes compromising their accuracy. Moreover, high precision is not required for post harvest irrigation scheduling as it was for maintaining moderate water stress under regulated deficit irrigation schedules. Given these facts, soil moisture is typically the simplest and most efficient guide for applying water after harvest. During this time, topsoil moisture under drip emitters ought to regularly approach field capacity, which is about -20 to -35 cbars for tensiometers and resistance blocks, and near the full point for capacitance sensors and neutron probes. As the post harvest period progresses, the time intervals between irrigations lengthen until water applications to rewet to near field capacity, if needed, are infrequent. 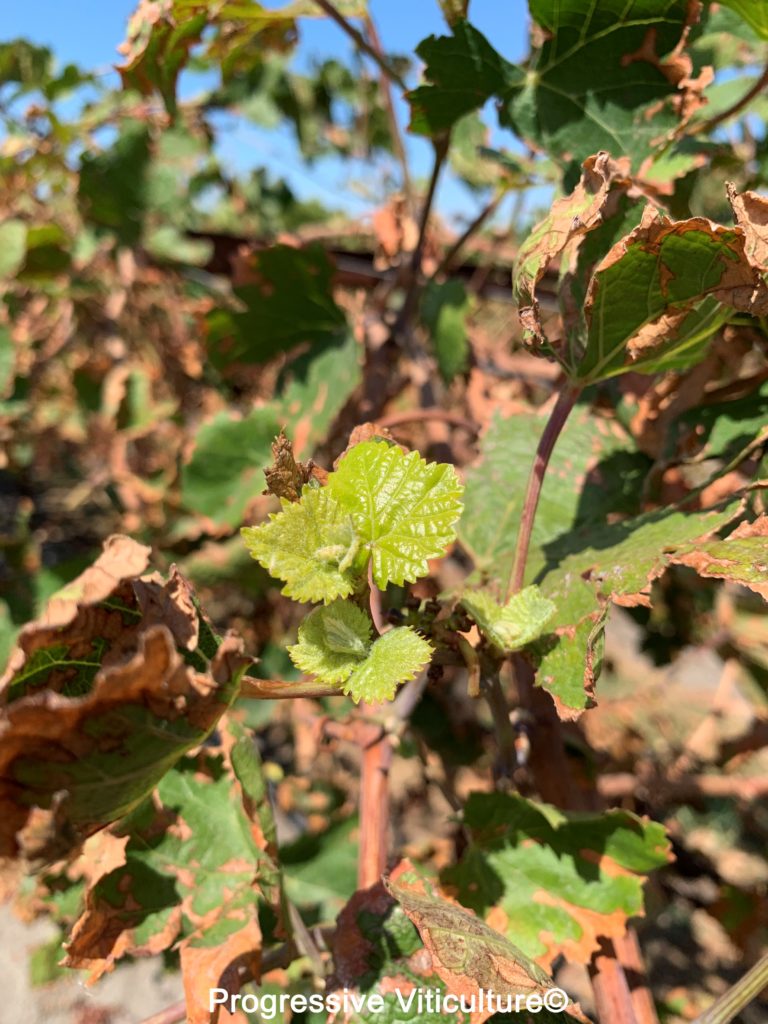 Following stress relieving post harvest irrigations, a small amount new foliage ought to appear scattered across the vineyard. Well managed post harvest shoot growth consists of only a few nodes and small leaves (Figure 2). Their appearance is confirmation of stress relief and enhanced vine metabolism, including photosynthesis. Growing more than a couple of new nodes of shoot, which will not survive the winter, is normally a poor investment of vine resources.

Without the crop competing with them for resources, the roots have a favorable opportunity for growth. In fact, post harvest is frequently the period of greatest root growth in California vineyards. New shoot growth, as described above, is evidence of a flush of root activity, for their emergence depends on hormones synthesized in root tips.

Promoting post harvest root growth provides several benefits. It enlarges the root system and its access to soil resources; it increases a vines capacity for growth, fruit production, ripening, and stress tolerance; and it often diminishes vine growth variability within a vineyard block. An enlarged root system also provides another benefit important to the next goal.

As mentioned above, relieving stress after harvest enhances photosynthesis and carbohydrate production. Much of this post harvest carbohydrate production is stored in woody grapevine tissues, especially woody roots. Early in the next growing season, these stored carbohydrate reserves will be remobilized and translocated to awakening buds and emerging shoots. They will remain essential resources for new shoot tissues until adequate leaf area develops so shoots become self-sufficient. When stored carbohydrates are insufficient, bud break and shoot emergence is variable, shoot elongation is slow, shoot size is restricted, and foliage color is pale (Figure 3). 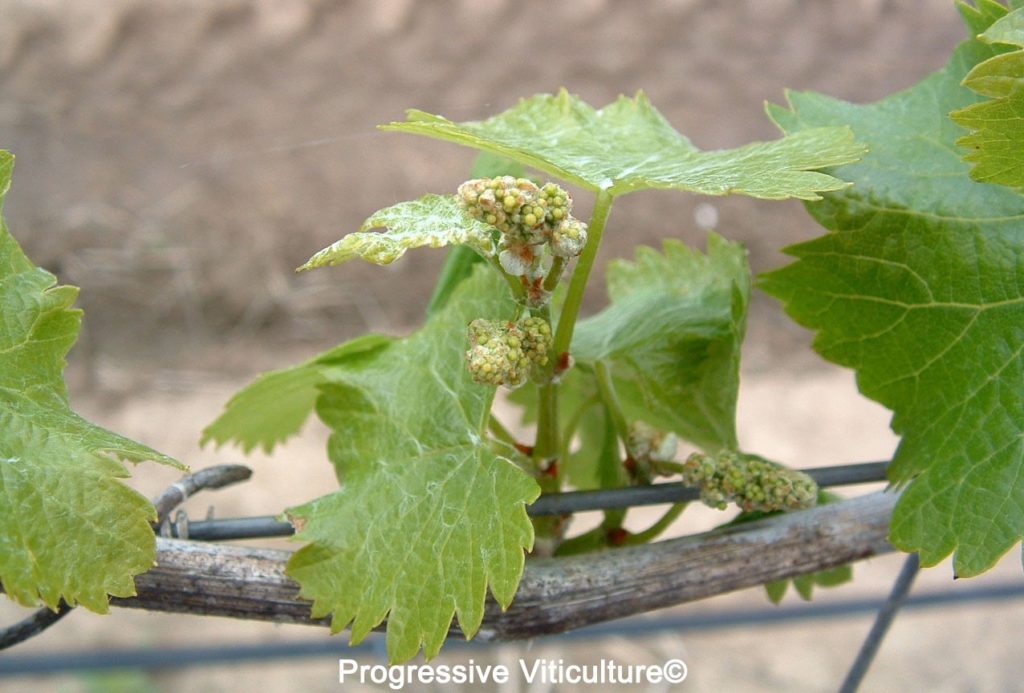 In addition to carbohydrates, vines store mineral nutrients in woody tissues, which also support early shoot growth and to some degree, fruit development after bloom. Among mineral nutrients, potassium is the foremost concern because the uptake of potassium diminishes greatly about 30 days after harvest and along with it, fertilization efficiency. About 5 pounds of potassium per ton of grapes left the vineyard with the harvested fruit. Often, it is beneficial to apply about a third of this quantity in post harvest fertigations.

Unlike potassium, other macronutrients, including nitrogen and phosphorus, are taken up and stored in woody vine tissues until leaf fall. Still, applying them shortly after harvest enhances fertilization efficiency and extends the opportunity for replenishment of depleted reserves.

N-P-K fertilizer blends low in ammonium nitrogen and high in phosphorus and potassium both relieve stress and enhance root activities. Furthermore, a significant portion of the nitrogen and phosphorus they contain will stay in the roots, promoting nutrient storage over renewed shoot growth. Typical rates are between 5 and 25 gallons 3-12-14-4(S) or similar fertilizer per acre, depending on recent fruit yield and vineyard design. Higher rates may be appropriate for heavily cropped or severely stressed vineyards. 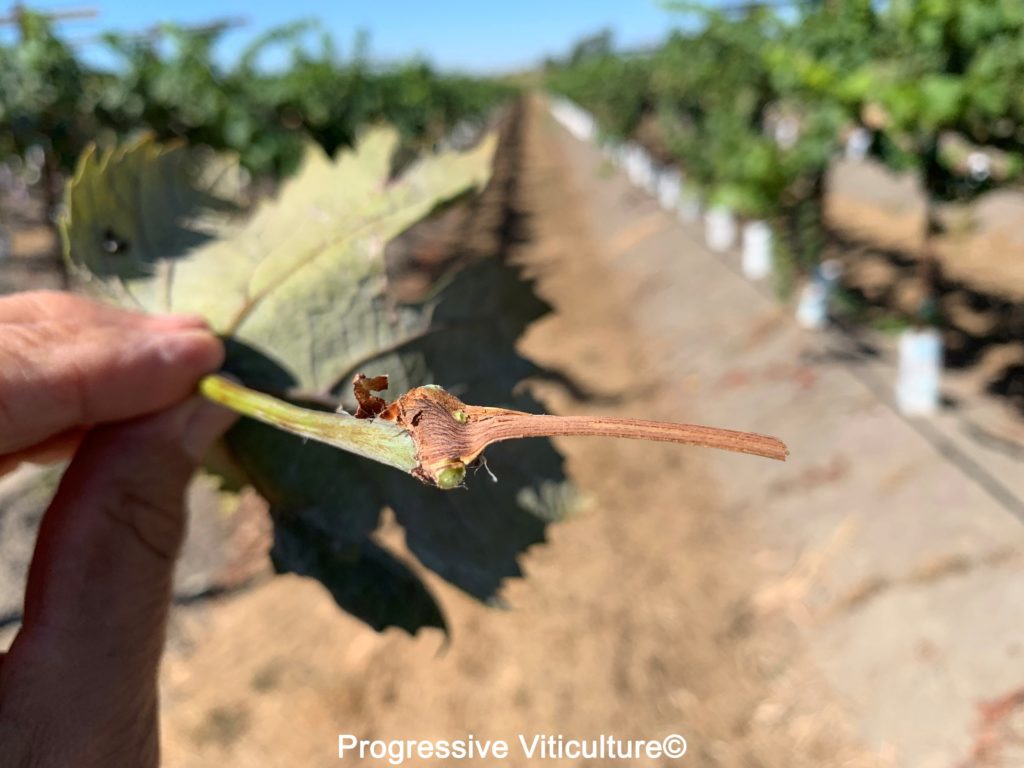 Figure 4. Woody cane tissues attached to the base of a petiole indicate fully ripe canes with a high potential for winter survival. (Progressive Viticulture©)

Micronutrients are also stored in woody vine tissues, but because they are required in small quantities, their application post harvest is generally not a management concern. There may be one exception and that is boron. Among numerous application timings and methods, high-dose foliar applications of boron (e.g. 5 lb Solubor) during autumn are most effective at increasing boron in buds and maximizing fruit set the following year. This method may be particularly beneficial for Zinfandel, which is highly susceptible to boron deficiency, when grown on low boron soils. Adequate boron is also essential for woody tissue development and cold hardiness, which is our final goal.

Actually, if all had gone well in the vineyard, canes began to become cold hardy before or during veraison, initiated with yellowing (periderm formation) near the base of the stems. During the post harvest period it is imperative to finish the process (Figure 4). Limited carbohydrate storage, nitrogen deficiency, and insufficient cane tissue hydration due to excessive water stress are common post harvest factors that limit cane cold hardiness (Figure 5). 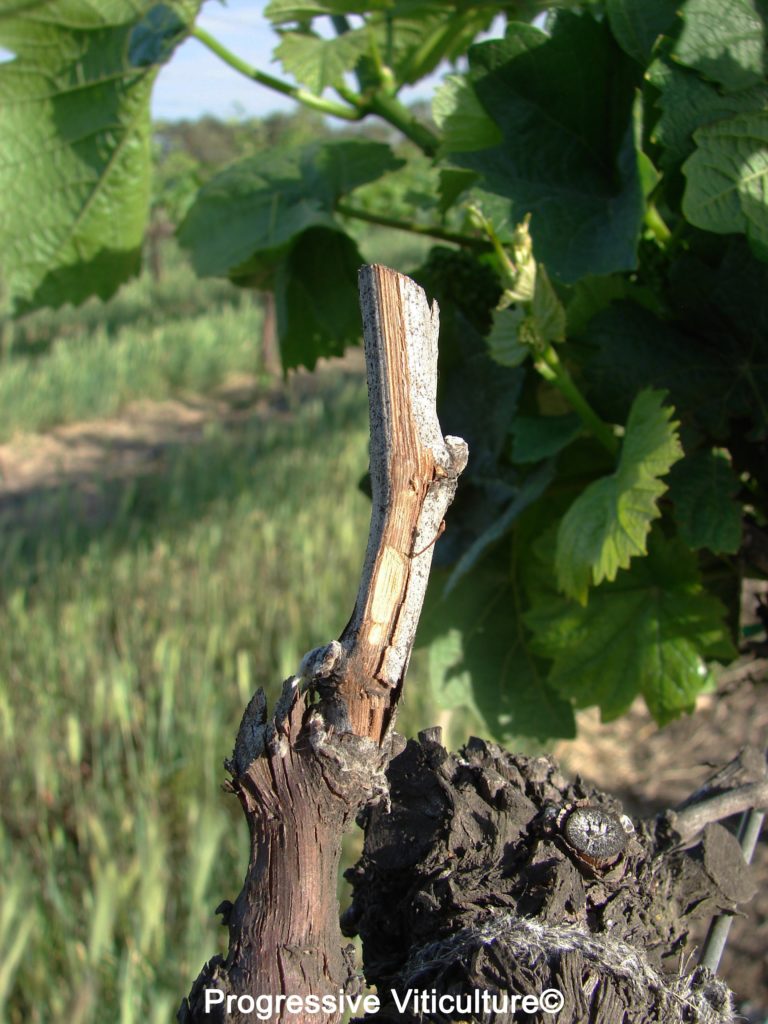 Post harvest vineyard management goals include relieving stress and rejuvenating canopies, stimulating root growth, promoting nutrient storage, and enhancing cane tissue cold hardiness. Taking actions to achieve these goals as soon as possible after harvest maximizes their efficiencies and benefits.  In addition, prompt implementation insures the vines will be as ready as possible for the next growing season, should an unseasonal hard frost cut short the post harvest period.

A version of this article was originally published in the Mid Valley Agricultural Services September 2011 newsletter.