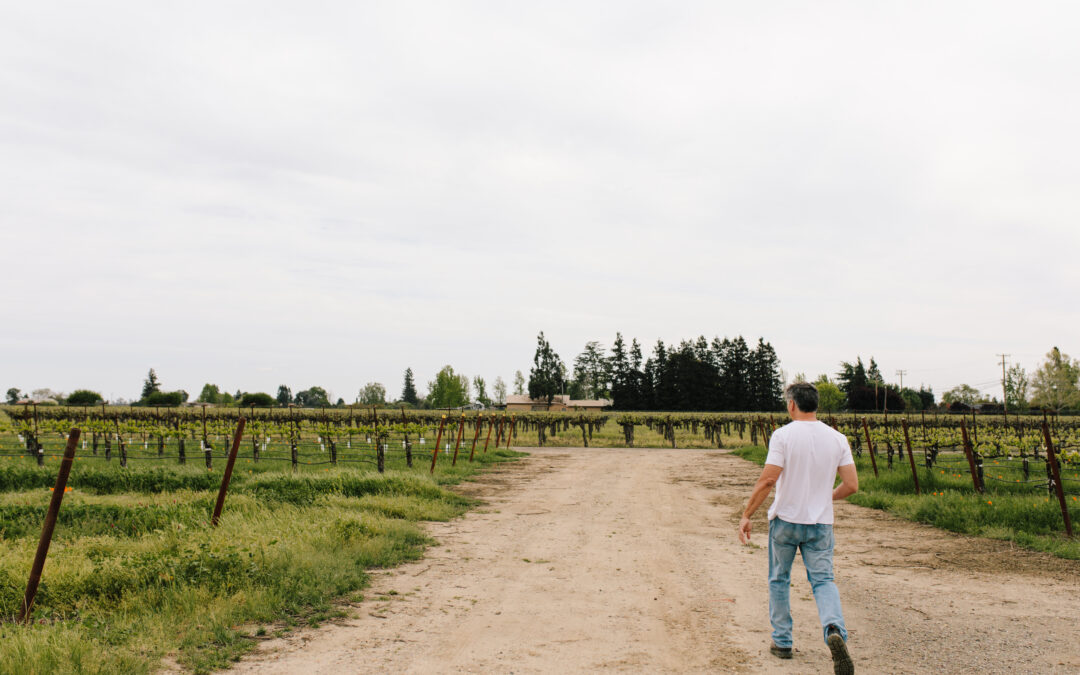 A continuous monitoring effort to determine whether spotted lanternfly (SLF, Lycorma delicatula) may be present in California was developed and implemented in 2020. This approach was modelled after a risk-based survey that was further refined and executed again in 2021. No evidence of SLF infestation has been found during the survey in any year. The survey is focused on areas of high risk of introduction where the preferred host, tree of heaven (TOH, Ailanthus altissima), is found. Movement of eggs from infested areas of the eastern United States and from infested areas of Asia was also considered. Because SLF is known to lay eggs on any object near its primary host, many of the pathways are similar to those of gypsy moth movement, including vehicles, outdoor articles, containers, and packing materials. 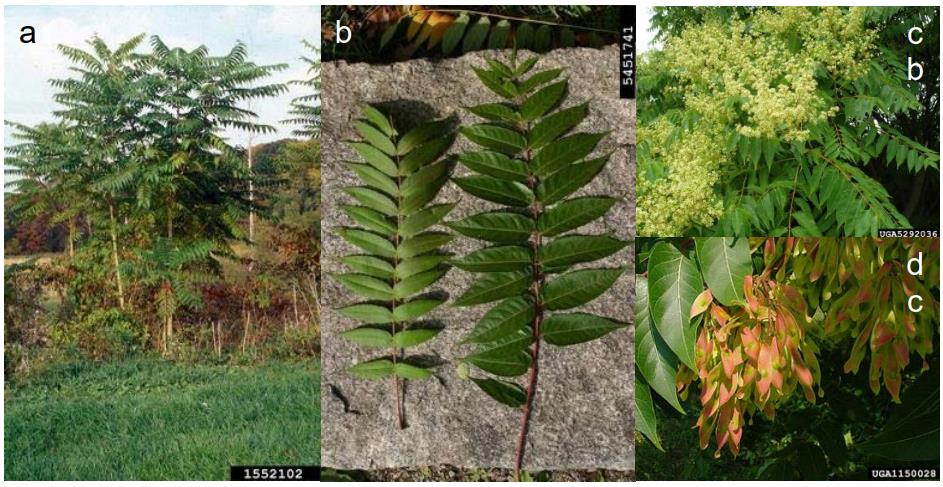 The potential high-risk locations targeted in the survey were:

Regarding 008A receivers, sites likely to store received and potentially infested materials outdoors for longer periods were prioritized, such as PODS® and similar containerized moving systems, trucking companies, and distributors with many trailers on site. 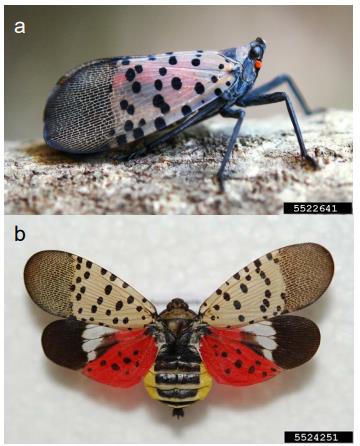 Though SLF has been found during air cargo inspections, it was determined that this is a relatively low risk pathway for California, because such SLF are likely to have flown into these planes (prior to takeoff) and flying SLF are unlikely to be gravid (gravid females are poor fliers). In addition, SLF are unlikely to avoid desiccation and remain viable without host plants after several hours in an aircraft (see air cargo inspection section below for additional information).

TOH was the target host of this survey, though grapevines, either wild or maintained, were surveyed when no TOH was present. While SLF has been recorded feeding on many hosts, literature, eyewitness accounts from infested areas, as well as the input from the SLF Science Advisory Panel suggest TOH is the preferred host, particularly for adults. 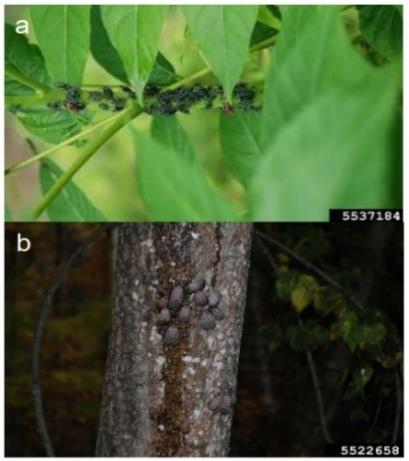 Figure 3: Aggregations of Lycorma delicatula (a) nymphs and (b) adults on TOH/Ailanthus altissima. (Photos: (a) Lawrence Barringer, (b) Pennsylvania Department of Agriculture)

Inspectors were instructed to find one or more survey sites with hosts near each target location, working from the target location outward up to 1/2 mile. Satellite view maps of the target locations with 1/4 and 1/2-mile buffers were provided. At each site, inspectors spent 5 minutes visually scanning the tree(s) or grapevine(s) and surrounding vegetation for signs of SLF nymphs, adults, egg masses, feeding damage, and honeydew. Latitude and longitude of the host were recorded.

If multiple TOH trees were present, the largest tree or stand of multiple trees was chosen, since SLF are thought to be visually attracted to larger host trees. The date, surveyor name, site name, host presence, host info (single or multiple trees; diameter at breast height (> or <6″ diameter), lat/long of the host, # suspect adults/nymphs/egg masses, and any relevant comments were reported. On an accompanying target location map, inspectors marked with pen or sharpie the location(s) of host site(s).

Survey guidelines were based on the CAPS-approved methods and were carried out when or after the SAFARIS PestCAST model predicted 1-50% adult emergence in a given survey area (https://safaris.cipm.info/safarispestmodel/StartupServlet?pestcast). The degree-day threshold was reached at different times throughout the state, and the survey took place in August and September. 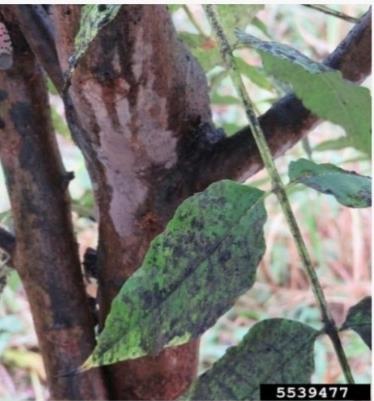 During August and October 2021, a total of 42 counties were visited, ranging from Humboldt in the north to San Diego in the south. A total of 472 high-risk target locations were visited, including 9 ports, 9 stone importers, 5 railyards, 88 campgrounds, and 327 008A receivers. In addition, the sites near a purported public sighting from 2019 in Davis and a 2021 unofficial indoor partial wing sample in Santa Barbara County were also surveyed. In some cases, there were multiple sites surveyed near one high risk target location when hosts were present such as for railyards, ports, and the “Stone City” area of Anaheim (which includes multiple stone importers).

A total of 472 site observations were made including 240 for sites with TOH, 54 where TOH was not present, but grapevines were, and 178 where neither TOH nor grapevines were found. Of the 240 sites with TOH present, inspectors noted the presence of multiple trees at 152 sites and single trees at 88 sites. Of the 294 sites surveyed where either TOH or grapevine were present, 13 were at or near major deep-water ports, 5 at or near stone importers, 34 at or near railyards, 32 at or near campgrounds, 209 at or near 008A receivers and 1 at a location of a purported public sighting from 2019. No evidence of spotted lanternfly infestation was found at any survey site. 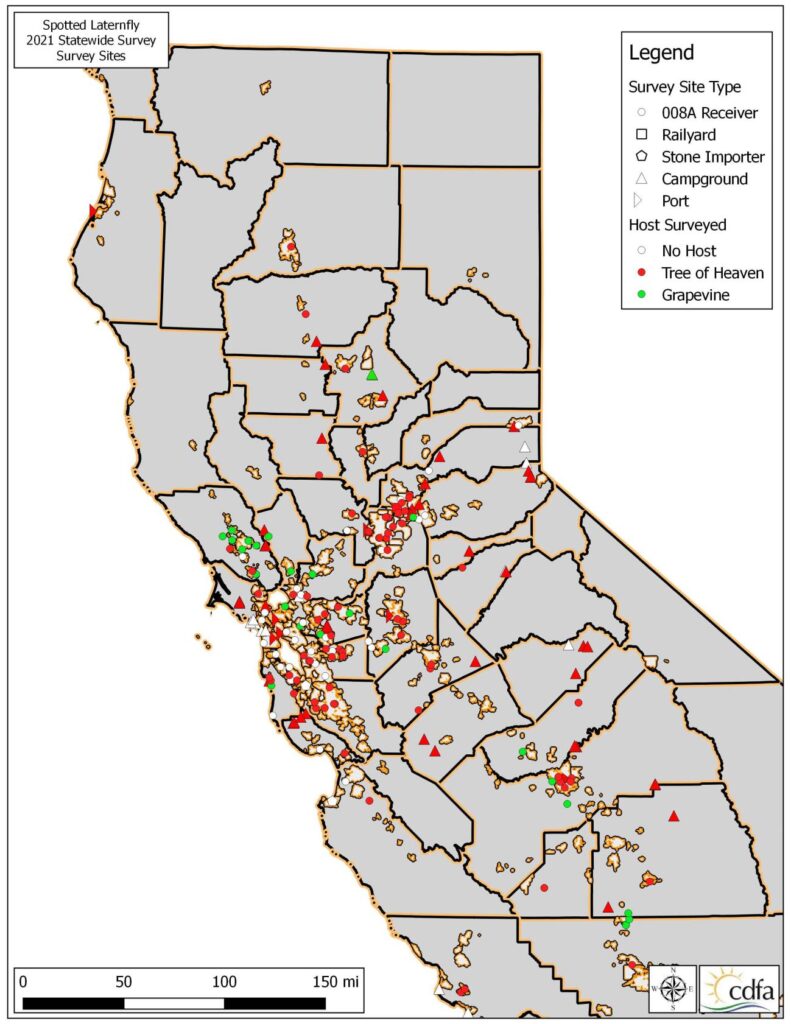 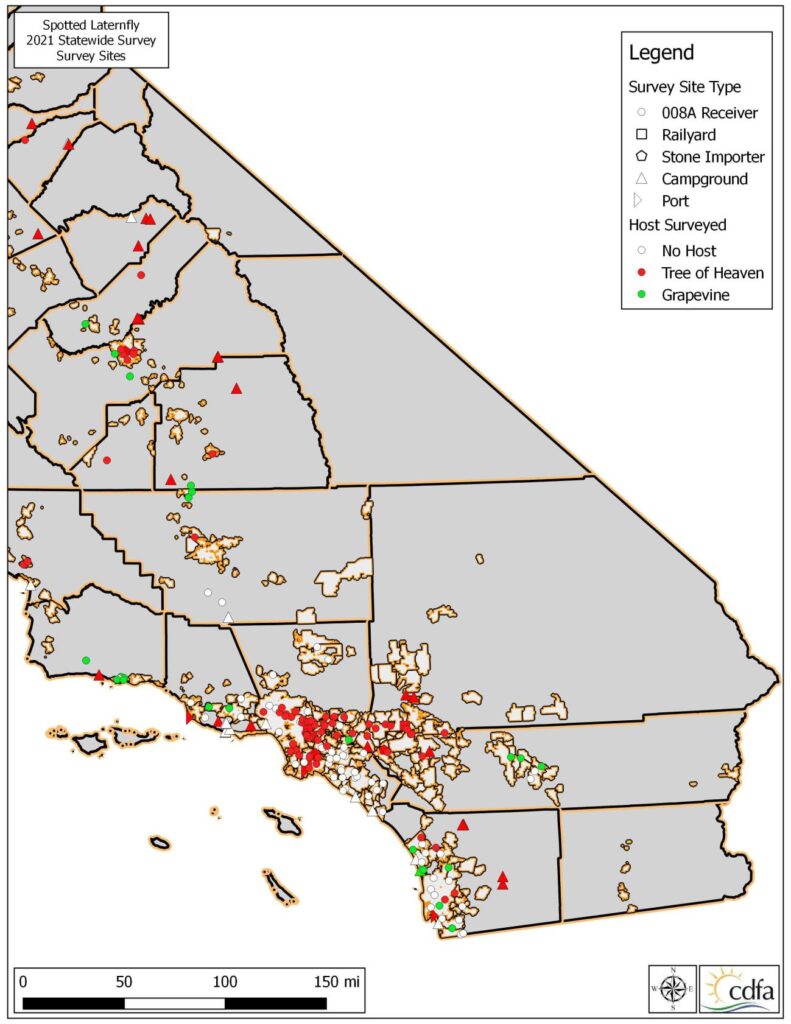 During the summer, when adult Japanese beetle (JB) is active, an intensive aircraft inspection program is implemented at multiple California airports where incoming cargo aircraft arrive from airports in JB-infested states. Starting in 2019, spotted lanternflies have been found during these JB inspections of cargo planes originating in the eastern United States. Below is a summary of spotted lanternfly detections for 2021 and 2020. CDFA plans to continue to implement JB inspections of aircraft, including visual inspection for SLF.

A total of 16 border stations are maintained along the California border, providing the first line of defense against gypsy moth as well as SLF by road. Each year more than 26 million private vehicles and 7 million commercial vehicles are inspected to ensure they are pest-free and meet regulatory requirements. In 2021, dead non-viable SLF were intercepted three times at border stations on objects originating in PA.

If you have any questions regarding this advisory, please contact Ana Nistor by email at anamaria.nistor@cdfa.ca.gov or by phone at (916) 654-1221.

This article was adapted from CDFA Pest Detection Advisory No. PD30-2021 (December 27, 2021) to be used as a blog post with permission from San Joaquin County Ag Commissioner Tim Pelican.