Wineries have come to expect and depend on delivery of high quality grapes from their growers, while at the same time, vineyard operational costs have reached new highs. Most wine grape growers have responded to these factors, striving for both production consistency and efficiency. Pruning is a vineyard management practice essential to both.

Through pruning, growers select buds for channeling annual grapevine growth into foliage. In effect, pruning integrates the affects of vineyard site, vineyard design, and past vineyard management on seasonal, above ground grapevine growth. In so doing, it sets the stage for fruit production at the beginning of each growing season. 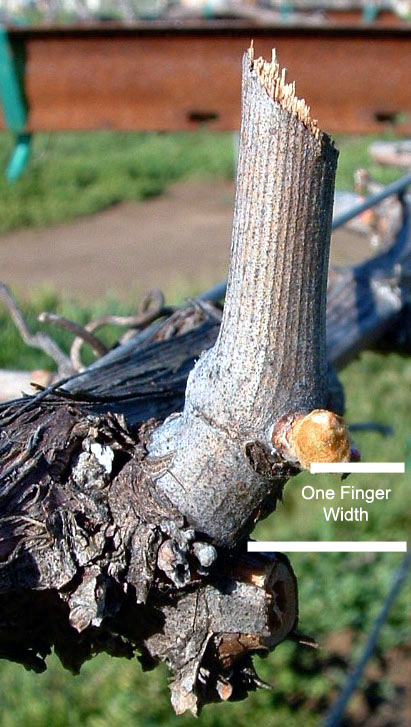 At the same time, pruning governs the partitioning of seasonal growth between vegetative growth (stems and leaves) and reproductive growth (clusters). It does so through bud number. Retaining more buds increases cluster growth relative to stem and leaf growth, while leaving fewer buds achieves the opposite effect.

Due to these portioning effects, pruning is a powerful tool for achieving growth balance, which is discernable as 14 to 20 leaves per shoot with two clusters. Growth balance promotes both consistent grape quality and operational efficiency. When a vine has too few buds, vines produce excessive leaf and stem growth and too few clusters. In this undercropped state, fruit and cane wood quality is diminished and fungal disease susceptibility increased. The reverse condition, with too many buds, results in too many clusters and too few leaves to support them. For such overcropped vines, fruit and wood ripening are impaired, tolerance for stresses is limited, and in severe cases, vine growth capacity and health declines.

Pruning also influences the positions of shoots in space through bud placement. Retaining more buds within a specific length of vine row increases shoot density, while leaving fewer buds has the reverse effect. Under most circumstances, a shoot density of 5 to 6 shoots per foot of cordon is best. A shoot density in this range facilitates the exposure of most leaves to direct sunlight, exposure of clusters to dappled sunlight, and the canopy interior to air movement. Due to its affect on shoot density, careful pruning is crucial for optimizing the configuration of canopies and the microclimates within them. Simultaneously, it facilitates vineyard operations, such as shoot thinning, spraying, and hedging. All of these influences contribute to production consistency and efficiency.

This article is a revision of the Mid Valley Agricultural Services January 2002 Viticulture Newsletter.

Over the years, interest in cane and machine pruning has gone through cycles, while spur pruning remains the wine grape industry standard. Actually, of the common pruning methods, spur pruning most readily lends itself to fruit production consistency and efficiency. It does so in part because it is associated with cordon training and the large reservoirs for nutrient storage cordons provide. But just as important, spur pruning provides precise control of bud number, spacing, and to some degree, orientation.

One-bud spur pruning is the most expeditious method to attain 5 to 6 shoots per foot of cordon. A 1-bud spur has one bud with a partial internode below that is at least a finger width (3/4 inch) (fig. 1). Buds at the base of spurs are normally not counted as they are sometimes less fruitful than buds above a semblance of an internode. 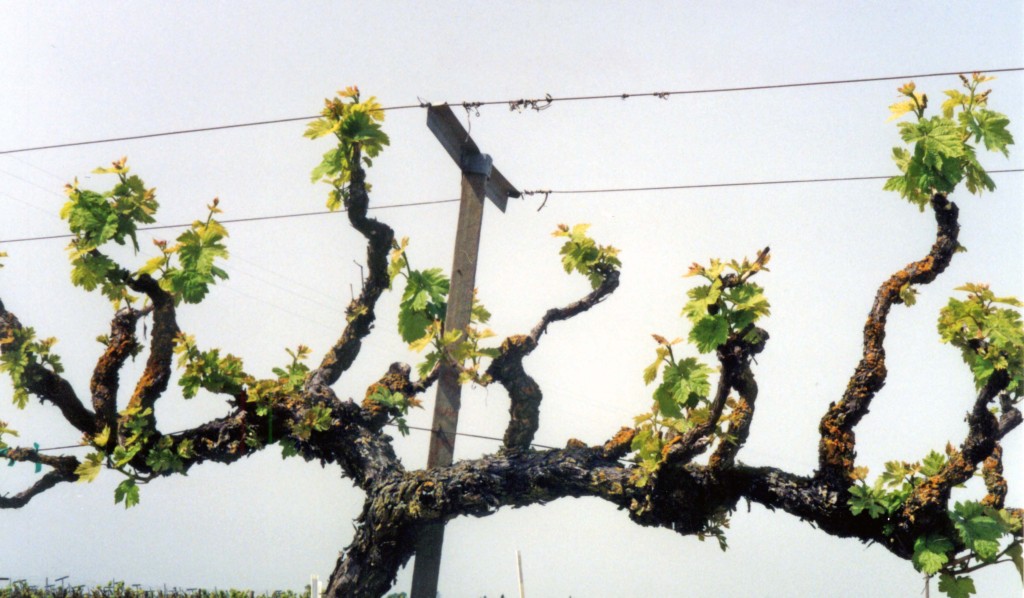 The method, quite simply, involves retaining 1-bud spurs spaced 3 to 4 inches apart along a cordon. When shoots are 4 to 10 inches long, thinning to one shoot per spur conserves the desired shoot density. In the process, removing the shortest and longest shoots promotes uniformity among shoots. Also, while pruning each year, selecting the lowest cane of acceptable diameter (> 1/4 inch) arising from the previous years spur for this years spur minimizes spur creep and arm extension (fig. 2). These actions help to maintain fine form, promote consistency in fruit yields and quality, and maximize vineyard operational efficiency.

Where cordons form a single line in the vine row, as with a VSP or T trellis, the combination of 1-bud spur pruning and conservation shoot thinning yield about 3 to 6 tons per acre. While such yields are fine for high value grapes, they are insufficient for many California vineyards. Keeping fruitful basal shoots increases yields, but also increases shoot density. In these situations, allow some shoots to drape away from the center of the canopy and out into the middle in “ballerina” fashion to maintain optimum exposure. Alternatively, remove leaves from the fruit zone, which at least enhances cluster exposure.

Horizontally divided trellises are better solutions for realizing high yields with 1-bud spurs and conservation shoot thinning. With little or no remedial measures, these systems typically yield 7 to 12 tons per acre.

Two-bud spur pruning is the method used in many older vineyards. For them, with their well established spur positions, 1-bud spur pruning is usually not an option. Still, the basic principals presented above apply. The lower of the two buds on each spur still needs a semblance of an internode below it. The ideal shoot density remains 5 to 6 per foot of cordon, which equates to about 2 or 3 2-bud spurs per foot of cordon in combination with shoot thinning to conserve the density set at pruning (fig. 3). Where shoot densities must be higher to support larger crops, shoot positioning, leaf removal, or canopy division remain remedies for minimizing shading and the loss of production consistency and efficiency.

To summarize, pruning has effects of fundamental importance in wine grape production. It simultaneously channels vine resources into foliage growth, partitions shoot growth between clusters and leaves, and positions and orients emerging shoots. Pruning sets the stage for production each growing season, but has affects that carry over into the next. As such, it is a determinant of both fruit production consistency and efficiency.