Many winegrape growers, especially those with larger scale operations, are increasingly looking toward mechanical methods of canopy management as a means to achieve higher yields, streamline their production costs, and simultaneously maintain and even improve winegrape quality[1]. At this year’s Unified Wine and Grape Symposium an entire session was dedicated to the topic of mechanization. Over the past decade, many advances in mechanization have been made. 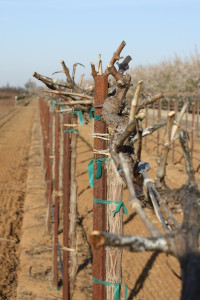 Mechanization of pruning was the topic of the March 11th LWC field day. Growers considering mechanical pruning must first grapple with a number of questions. What type of equipment do I need? How much money should I expect to invest? How much can I expect to save, and over what period of time? Can I mechanically prune my existing trellis system, or should I replant? How will mechanical pruning impact pest and disease pressure and winegrape quality? At the field day we discussed these and many other questions, which I summarize below.

Paul Verdegaal, our UCCE farm advisor, began the day with a review of the basic purposes and principles of pruning according to Winkler et al[2]. The basics serve as a strong reference point as we deliberate the costs and benefits of mechanical pruning. Why prune in the first place? We prune to 1) establish and maintain the structure and form of the vines, 2) distribute the bearing wood over the entire vine and entire vineyard, 3) and regulate crop load. To accomplish the purposes of pruning, we must first understand how vine the physiologically responds to pruning in terms of growth and fruiting. Winkler et al’s principals of pruning can be applied to manual and mechanical pruning alike, and are as follows:

The first site visited during the field day was the Liberty Winery field trial, were Ernie Dosio of Pacific Agrilands shared his knowledge about mechanized pruning. The Liberty trial is a three-year-old mixed block of Cabernet Sauvignon, Chardonnay, Merlot, Pinot Grigio, and Pinot Noir, which was established specifically for experimentation with mechanical pruning. Upon first glance, this vineyard is not average. The vines are 66” tall with single wire trellising system. The single wire, which is mounted just one inch below the top of traditional t-stakes, is critical for mechanical pruning as it allows the machinery to straddle and move down the length of the cordon without obstruction. The machine is adjusted to prune the vines into an 8.5 X 8.5 inch “box” or “hedge”. Following the mechanical pruner, Ernie uses a small field crew with pruning shears to remove horizontal or otherwise undesirable growth. The crew is able to move quickly through the vineyard at walking pace. For the first time, the trial vineyard will be mechanically pruned in 2014. During the first three years, the vines were manually pruned for the purpose of establishing spur position and orientation. The manual pruning was done to simulate the 8.5 X 8.5 inch dimensions, which allows for about 2 to 3 buds per spur. Vine spacing is 7 X 10 feet. Ernie recommended 8 X 10 foot spacing, but warns against anything less than 7 X 10. As you can imagine, the appropriate trellis system and spur position is critical for maximizing the benefits of mechanical pruning. Converting an established vineyard with a standard trellis system is problematic. 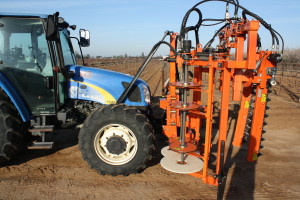 Colombard. The relatively high number of buds left on the vine after pruning is a major reason. Because of this, mechanically pruned systems require much greater photosynthetic capacity. The high single wire allows for a tall canopy curtain, which better meets the system’s photosynthetic needs. Ernie prefers a 72” high wire. This high yield does come at a cost in terms of the vine’s nutrient and water needs. Ernie estimated that his mechanically pruned systems receive 50% more nitrogen and water compared to traditional manually pruned systems.

Mechanical pruning equipment is expensive, but relatively simple in design. On display was Pacific Agriland’s Spagnolo brand mechanical pruner, which had a $65,000 price tag. Spagnolo is an Australian company, where mechanical pruning has been successfully used for many years. The equipment was offset mounted on the front of the tractor. The pruner consisted of two parallel sets of shears (similar to those found on conventional cane trimmers) located on the front and four bladed wheels located at the rear. The shears sculpt the sides of the box and the wheels the top and bottom. Ernie shared that maintenance costs include replacements blades, which run $400-500 per year, and complete rebuilds, which run about $15,000 every other year. Ernie uses a larger 100HP tractor, versus a smaller 50HP tractor, to support high weight and the forward offset mounting of the pruner. This setup can mechanically prune 900 acres in 2 months’ time.  The Spagnolo pruner was designed specifically for the job, but Maxwell Morton, UCCE farm advisor for Merced County, says that conventional cane trimmers can be adapted to accomplish similar results[3].

Joe Valente of Kautz Farms hosted the second field site, a 29-year-old Cabernet Sauvignon on St. George vineyard converted to “minimal pruning” in 1999. The vineyard was originally manually pruned. Due to old age and disease its yields were down, and thus scheduled to be replanted. But Joe and the vineyard’s owner John Kautz then decided to conduct an experiment. Their goal was to stretch the economic life of the vineyard by drastically reducing operation costs through minimal pruning. While the vineyard produces about 7 tons per acre, the result is what Joe referred to as “a real mess”. However, the experiment led to some lessons learned that Joe believes are transferable to mechanical pruning.

Joe wonders how long mechanically pruned vines will remain productive. He recalls that the most productive vines are those with one-year-old wood on two-year-old wood. The minimal pruning methods he used are not selective, resulting in one year old wood on two, three, four, and even five year old wood. This leads to a vine that resembles a bush, with much old and dead growth at its center. In order to keep new wood on the vine, Joe has had to increase the width of the hedge. Based on this experience, Joe is skeptical that maintaining an 8.5 X 8.5 inch box over many is realistic.

This leads us to another challenge – MOG. Because the vineyard is mechanically harvested, Joe has had trouble keeping the abundance of dead wood and other debris out of the harvest bin. Trunk shaker harvesters seem to work better than those that shake the canopy directly with bow rods or pivot strikers. Newer vineyards with single wire systems would have much less old and dead wood, but Joe’s point is worth contemplating.

During the field day I took away two main lessons from Ernie, Paul, and Joe. First, in order to get the most out of mechanical pruning, one should start from the ground up with a trellising system and vine spacing designed to accommodate the pruning machinery and productivity of the large canopy. Retrofitting an existing trellis system may work, but not without difficulties and inefficiencies. And finally, mechanically pruned systems are best suited for operations that are able to make a significant investment, aiming for high yields, and not willing to sacrifice on quality.