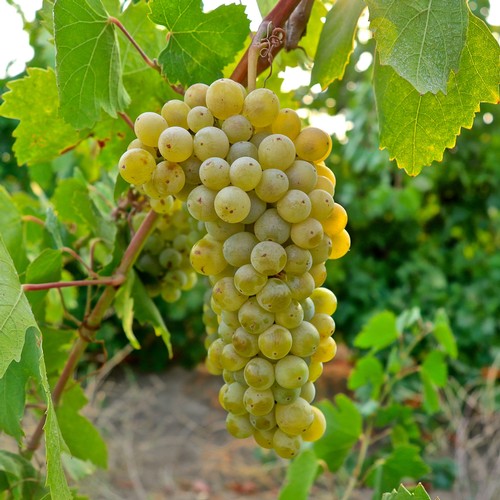 The Assyrtiko grape is pronounced ah-SEER-tee-koh, according to Jeff Perlegos, a second-generation winegrower of Greek heritage, who farms vineyards on both the east and west sides of Lodi with his brother John Perlegos.

When I told Jeff that everything I know about Greeks and Greek culture, I learned from My Big Fat Greek Wedding, he told me, “At least I can tell you, everything they show about Greeks in that movie is absolutely true.”

Now that the Perlegos family is growing Assyrtiko (as well as a small amount of another indigenous Greek grape, Vidiano), it may behoove us all to know a little bit more about the grape. 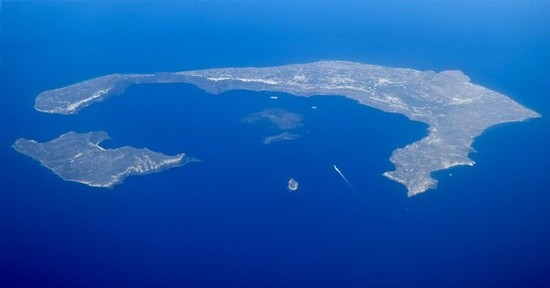 Travel brochure overhead of Santorini islands, the native home of Assyrtiko, in the Mediterranean’s the Aegean Sea. andronikossantorini.gr.

First of all, it is one of some 300 native grape varieties purportedly cultivated in Greece. A Greek historian/winegrower, Dr. Haroula Spinthiropoulou, has been quoted to say: “Wine has played a central role in everyday Greek life for more than 4,000 years,” and that there is evidence of bustling wine culture and trade on islands like Crete and Santorini as well as the mainland Peloponnese region that can be traced back to the 2nd millennium B.C. (re Kostrzewa, Ancient Greek Varieties Making Thoroughly Modern Wines).

It’s probably not possible to say if Assyrtiko was one of those grape varieties planted 3,000 or 4,000 years ago, but some of the Assyrtiko vines cultivated today — most notably on the island of Santorini, although it is also grown on Crete, other islands, and in northern Greece — are said to be as old as 150 years. And like many of Lodi’s old vine plantings, they are own-rooted; presumably immune to the root louse, phylloxera, because of the Greek islands’ sandy soils (Lodi’s Mokelumne River AVA is defined by sandy loam soils). 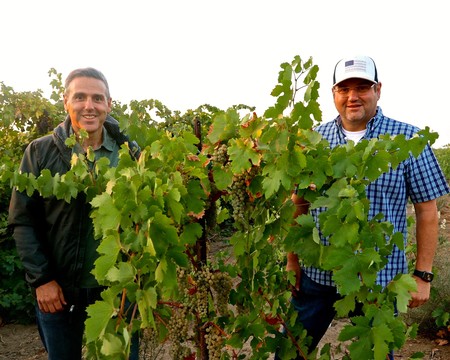 Jeff and John Perlegos with one of their recently planted Assyrtiko vines.

U.C. Davis Professor Harold Olmo is known to have obtained cuttings of Assyrtiko directly from Greece from a colleague at the University of Athens as long ago as 1948, but the grape has never really caught on in California. The plant material utilized by the Perlegos family for their two blocks of Assyrtiko, adding up to just 1.5 acres, all came from U.C. Davis. About half of the Lodi plantings are on own-rooted vines, and the other half grafted over from what were Merlot vines (originally planted on rootstock). The Perlegos brothers planted two clonal selections of Assyrtiko made available by Davis’ Foundation Plant Services.

The big question, of course, is what kind of white wine a Lodi-grown Assyrtiko will make. First of all, we don’t know exactly how the Perlegos family’s Assyrtiko will turn out. 2021 will be their very first vintage of this varietal white wine. 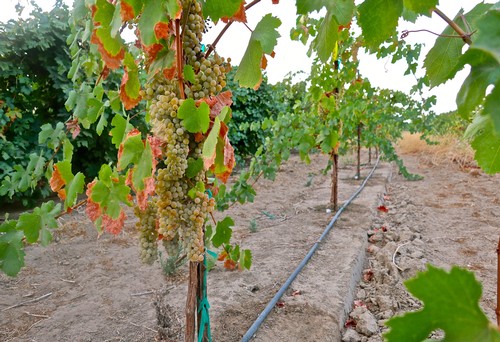 Mr. Perlegos and I, however, did taste a 2020 Domaine Sigalas Assyrtiko, imported from Santorini, just last week, along with some close friends (the bottle was sprung upon us by Turley Wine Cellars winemaker Tegan Passalacqua, who had invited us over to his Victor, Lodi cottage for dinner). Perlegos described the Domaine Sigalas as “the gold standard” of imported Assyrtikos.

The best way to describe the Sigalas Assyrtiko is, basically, dry, lemony crisp, and very minerally. By “minerally,” I mean that the first thing you taste is sort of what you imagine lemon water steeped in chalky rocks with a little briny ocean water would taste like if you mixed it all up in the kitchen. Only, of course, it was much more pleasant than that — it tasted like a lemony crisp wine, with its subtle citrus-like fruit tinged just enough by those nuanced, briny minerals to give you that kind of overall impression. 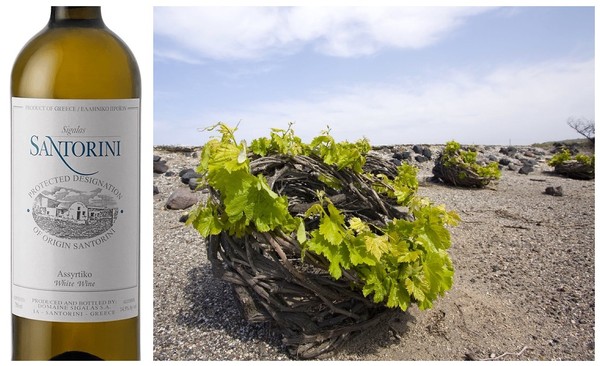 The Sigalas Assyrtiko, in fact, possesses sensory qualities to which more and more consumers are gravitating: wines with slightly sharper natural acidity than most commercial American white wines, less overt fruitiness, more subtlety, and some degree of earthiness. Oh, and with minimal, or zero, taste of oak. Many consumers now want their wines to taste “pure,” without a lot of winery machinations.

The day after our dinner at the Passalacqua cottage I went online and read that the 2020 Sigalas also weighed in at 15.1% ABV (i.e., alcohol by volume). It certainly did not taste like a wine with that much alcohol. In fact, it came across as moderately weighted, even light-feeling in the body. So much for technical information.

Perlegos commented to me: “It did not seem heavy to me either, despite its alcohol. Most producers in Greece pick their Assyrtiko ripe [grapes picked with higher sugars will invariably produce wines with higher alcohol levels] yet still have the acidity to deal with. Typically, they finish their wines with some residual sugar to balance the high acidity, so I can see how they appear a bit thick and full-bodied.” 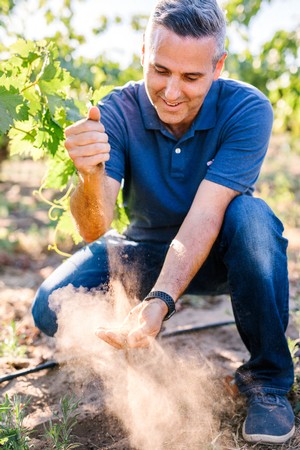 The 2020 Sigalas Assyrtiko, however, tasted dry, and the opposite of heavy. Adds Perlegos, “I actually ran an analysis on a bottle a few months back, and it had 0.9 grams per liter of residual sugar” — technically, well within the spectrum of “dryness” for the vast majority of people.

According to Mr. Perlegos, as of August 28-29, 2021, the grape sugars in his Assyrtiko blocks were at about 21° Brix, with a pH (i.e., reading of the strength of acidity) of 3.15. If Perlegos had picked then, this would have produced a white wine between 12% and 13% alcohol if fermented completely dry but would be almost as puckery as biting into a lemon. Hence, Perlegos’ explanation as to why producers in Santorini often finish their Assyrtiko with a little bit of perceptible residual sugar, to take the edge off the sharpness of the grape’s typically high acidity.

Says Perlegos: “We’ll monitor the grapes this week [August 30-September 3], and probably end up picking them, if we can get the pH to about 3.2 [picked at this level, resulting white wines are likely to end up tasting lemony crisp without being overly sharp]. Even now, the flavors of the grape are already there, and seeds are ripe [i.e., not green or overly bitter].” 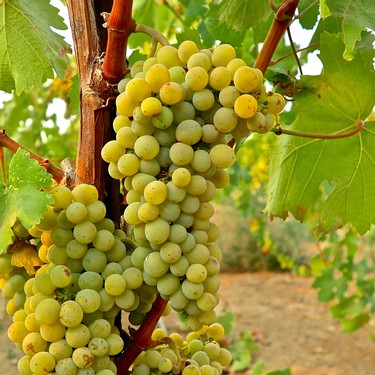 Vidiano, an indigenous Greek grape planted by the Perlegos grape primarily for its softer, lusher profile, to be used to blend with Assyrtiko’s sharper acid, fuller-bodied varietal character.

Here’s the skinny: Lodi, as we like to constantly remind everyone, has a postcard-perfect Mediterranean climate, and lots of sandy soils. Santorini sits in the middle of the Mediterranean Sea — well, make that the Aegean Sea, an embayment of the Mediterranean — and like Lodi, enjoys dry summers with intense sunlight, albeit with more of a “Greek island” slant (particularly, strong winds and more humidity). It makes sense that a grape-like Assyrtiko should do just fine in the Lodi AVA, especially for these two good reasons:

And so, the question is now: Lodi, are you ready for still another wine that is new, different… exciting? 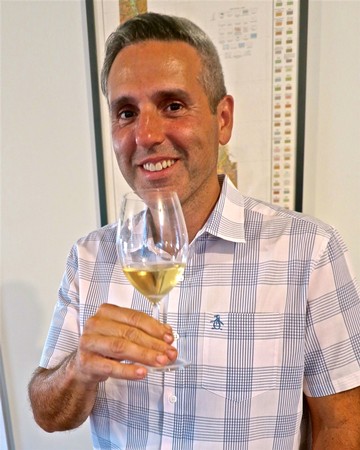