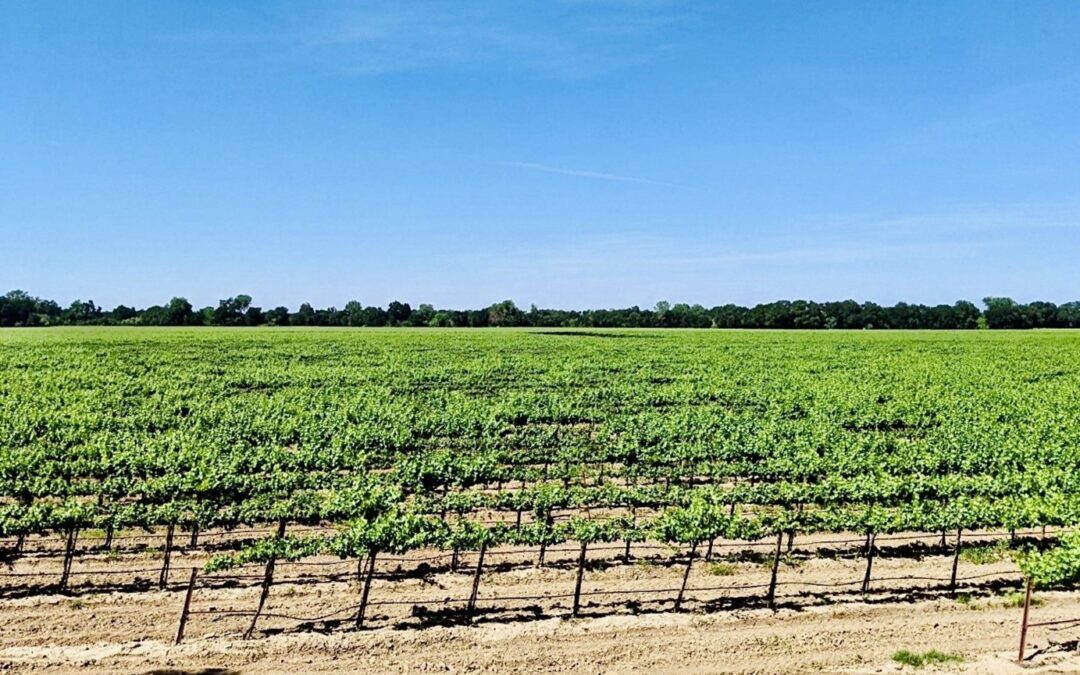 Some Lodi winegrape growers are reporting grapevines and vineyard blocks with no vine growth or stunted vine growth this spring that appears to be related to cold injury damage experienced during an unusual cold weather event that occurred November 8-12, 2020 when overnight/morning temperatures dropped below freezing throughout most of the Lodi AVA.

Although the cold event occurred post-harvest with no impact on the 2020 crop, most vines were not yet dormant, and it is believed that vines had not become seasonally acclimated to prevent cold damage to vascular tissues. Younger and more recently planted vines were more susceptible, however, damage has also been observed in vineyards up to 20 years old.

This cold event occurred over much of the northern San Joaquin Valley and Sacramento Valley, and growers have reported similar damage in walnut orchards and olive groves this spring. 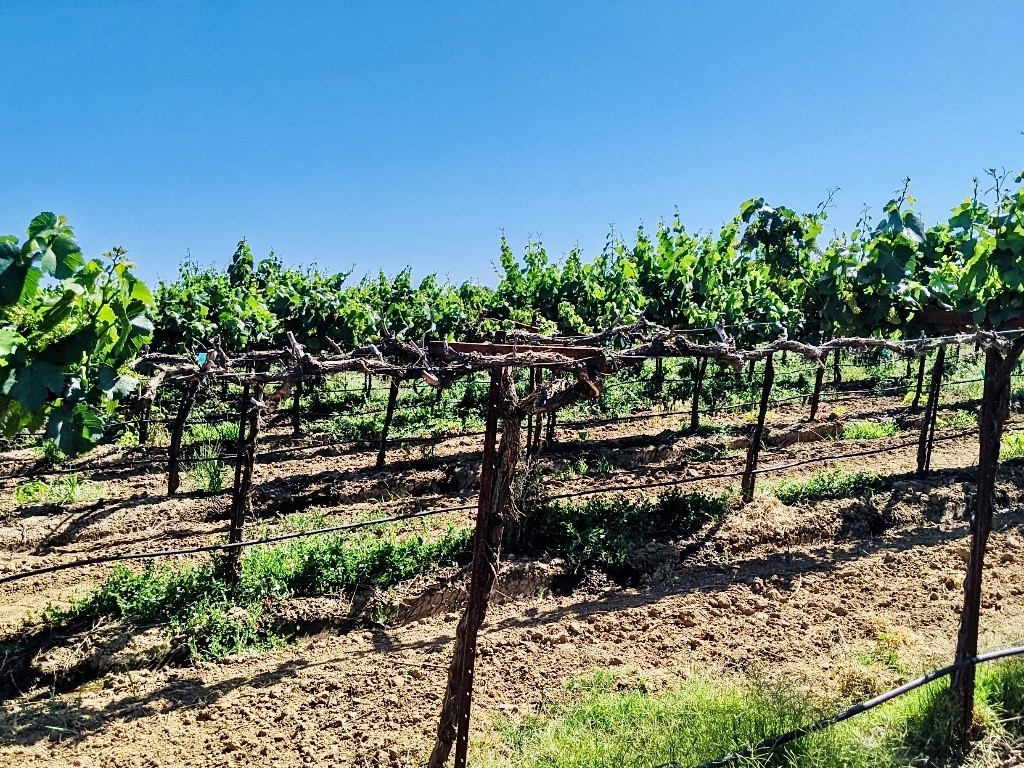 A lack of new spring growth on Chardonnay. Above and cover photos courtesy of Lodi Grower Bruce Fry, Mohr-Fry Ranches.

Based on archived data for the Lodi Weather Station Network’s Daily Meteorological Summary of 37 weather stations, temperatures of 32⁰F (0⁰C) and below were recorded at some stations for five consecutive days from Sunday, November 8, 2020, through Thursday morning November 12, 2020. Minimum daily temperatures for four station locations that recorded among the lowest temperatures over the five-day period appear below.

Oddly enough, daily maximum temperatures during this same period were around the seasonal normal, ranging from 58.4⁰F (14.7⁰C) to 67.8⁰F (19.9⁰C) across the Lodi Weather Network.

Temperatures from the Acampo, Linden, and Sloughhouse weather stations between November 1-14, 2020. Courtesy of Will Farr, Lead Meteorologist, Western Weather Group. In email communications, Will warned of the chill that can accompany a wildfire vintage: “Smoke is very effective at blocking the incoming shortwave radiation from the sun so it stayed in the 40s/50s during the afternoons [at the time of the 2018 Camp Fire], but it’s not very good at holding in longwave radiation escaping the surface at night in the way that clouds do. As a result, the temperature was allowed to cool at night almost as if there were no clouds at all.” We didn’t find any evidence to indicate that the November 2020 cold damage was a result of what Will calls “wildfire-induced frost”, but it is something to consider and understand for future vintages.

Aaron Lange, VP of vineyard operations at LangeTwins Family Winery and Vineyards, said the situation was not a widespread disaster, but observed damage tended to be in younger vineyards and in cane pruned vineyards. “We believe the vines did not have enough opportunity last fall to acclimate for winter cold hardiness, and they had not completed their transition to full dormancy,” Lange said.

Lange reported a 50-acre block of Sauvignon blanc planted in 2019 had sustained significant damage. The vines had been trained onto trellis wire in 2020 and were expected to produce the first crop in 2021. Now the vines will have to be cut back and retrained, costing additional labor and resulting in a year of lost production. 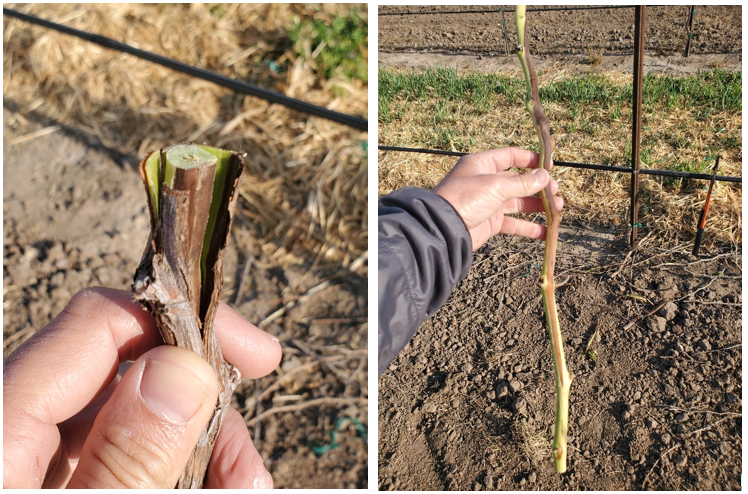 Peeling back the bark shows brown vascular tissue in cold-damaged Sauvignon blanc planted in 2019 in Lockeford. Photos were taken on April 21, 2021, and are courtesy of Charlie Starr IV, Pest Control Advisor, and Lodi Grower.

Lange also reported cold injury in mature Pinot noir and Pinot Gris vineyards in the Delta, in blocks up to 15 years old. In mature vineyards, the cold damage affected buds that would have produced shoots and clusters and will result in crop losses and reduced yields this season.

Viticulture consultant Stan Grant with Progressive Viticulture has seen or heard reports of, cold injury this spring in vineyards ranging geographically from Elk Grove in the north to Livingston in Merced County in the south, and from the Delta area near Brentwood in the west to about Highway 88 on the east side of Lodi. Grant has seen cold injury in Central Valley vineyards at different times during his career. He observed that the degree of cold damage can vary widely and its occurrence is quite random. “Sometimes damage can occur throughout a whole block, and sometimes it may be just a few vines in a low spot in the vineyard where the coldest air settles,” Grant said.

Although not considered a common occurrence in the Lodi area, a cold injury may be a cause of restricted spring vine growth more than growers realize, because it may not always be diagnosed as the cause. “There can be restricted spring vine growth due to a number of causes, and sometimes you have to do more investigation and go through a process of elimination,” Grant said. Damaged vine tissue can be detected by peeling bark or outer vine layers, or by pruning vine parts, to reveal brown vascular tissue. This internal tissue damage can be visible soon after a cold event, but most growers won’t notice a problem until spring when the vine does not properly push new growth. Lodi growers started seeing problems in late April when damaged vines were not keeping pace with healthy vines. 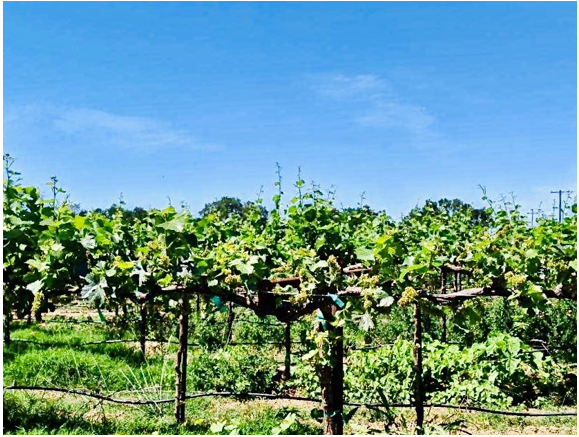 Stunted growth from cold damage on Pinot noir planted in 2017. Photo was taken on May 11, 2021, and is courtesy of Lodi Grower Bruce Fry, Mohr-Fry Ranches.

Jason Eells, vineyard manager for Arbor Vineyards, reported damage to about half of a 48-acre block of Sauvignon blanc planted in 2019 in the Jahant area. “The vines were trained onto the wire last year, and we were expecting our first crop this year, but about half the vines have no green growth at all,” Eells said. The plan is to cut the damaged vines and retrain this season with new growth from above the graft union. He also found less severe damage in another Sauvignon blanc vineyard about two miles away that has a section with stunted green growth. This vineyard will be managed with more of a wait-and-see approach, with shoot thinning and growth management, but with lower yield expectations.

In addition to the Sauvignon blanc, Pinot noir, Pinot gris, and Chardonnay already mentioned, other varieties reported to have sustained cold damage include: Albariño, Cabernet Sauvignon, Tannat, and Zinfandel. Vineyard site conditions, temperature severity, and timing were most likely the main factors contributing to cold damage. Anecdotally, some believe that Mediterranean Vitis vinifera varieties planted in the Lodi AVA may be more susceptible to cold damage. 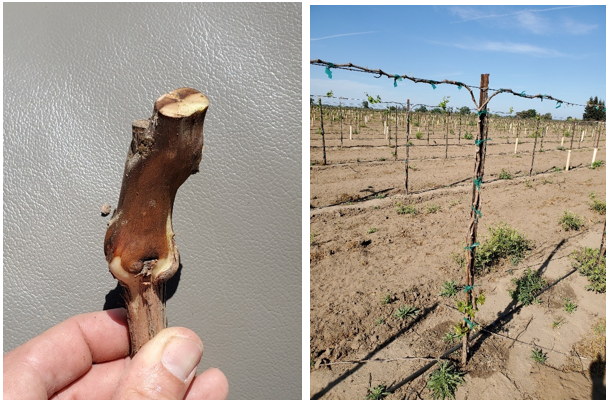 Cold damage symptoms of brown tissue (left) and no green growth (right) in Cabernet Sauvignon planted in 2020 in the Lodi AVA. Photos were taken on April 19, 2021, and are courtesy of Charlie Starr IV, Pest Control Advisor, and Lodi Grower.

Lange contacted viticulture research/extension advisors with Cornell University in upstate New York, who have more experience with fall and winter cold injury in vineyards. Dr. Terry Bates, director of the Cornell Lake Erie Research and Extension Laboratory, provided the following information regarding cold damage to grapevine phloem and xylem tissues: “These tissues prepare for cold acclimation through controlled dehydration and accumulation of cryoprotectant substances (sugar-protein molecules) to bind any free water molecules and prevent ice formation. Any free water in these tissues during a low-temperature event will form ice crystals, damage cell membranes, and split trunks.”

It is believed that late-season irrigations, done by some Lodi growers last fall into November to maintain root moisture during dry fall conditions, could have contributed to cold damage. According to Bates: “Even without leaves on the vine to draw water up by transpiration, there is a significant amount of solutes in the roots causing root water pressure to send up the trunk and cordon xylem vessels. This would have provided enough free water to freeze in the trunks and cordons and cause vascular damage, trunk cracking, xylem streaking, and entry points for Eutypa and crown gall.”

When considering late fall irrigations in the future, Bates advises looking at the 7-10 day weather forecast in the fall and not irrigating if temperatures are expected to drop into the 20s. 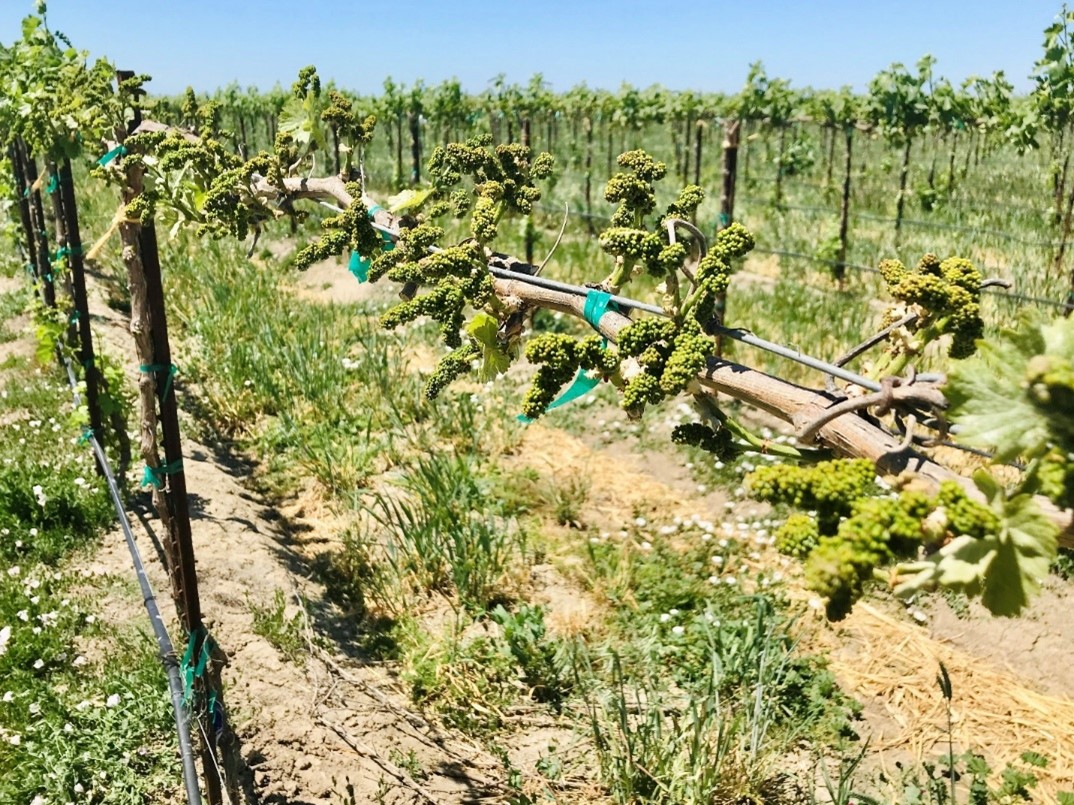 Cold damage, a lack of winter soil moisture, or a combination of factors? Photo of Pinot noir planted in 2017 in the Delta, courtesy of Daniel Meyers with Vino Farms.

Vine treatments to address cold damage will differ based on the degree of the damage and should be approached on a vine by vine basis. Unless the entire vine has sustained permanent damage, the vine has a chance to recover and be saved.

In cases of milder damage, when some green growth is observed, it may be better to wait and see if the vine recovers during the season, although there may be no crop, or a very small crop from such vines this season. Bates explained, “If you had partial vascular tissue damage in the fall, you will have spotty bud push that should eventually recover when the cambium produces new vascular tissue, but you will need to baby the vines through it.” But he also cautioned, “In this situation, the shoots can start growing and then suddenly collapse because the old damaged vascular tissue can’t keep up with the water demand.”

In more severe cases, vine surgery and retraining may be required. Bates said: “If you had complete vascular tissue damage in the fall, you will have blank buds and there will be no stimulus to reactivate the cambial tissue. Prune it out and retrain.” To do this, he advised: “Pick the lowest viable shoots on the trunk above the graft union and retrain the vine. The lowest shoots will have the best chance of working off of old xylem and phloem connections with the root system and the shortest distance for new vascular development from the reactivated cambial tissue. There will be no longer-term damage because the vascular cambium will build new xylem and phloem.” 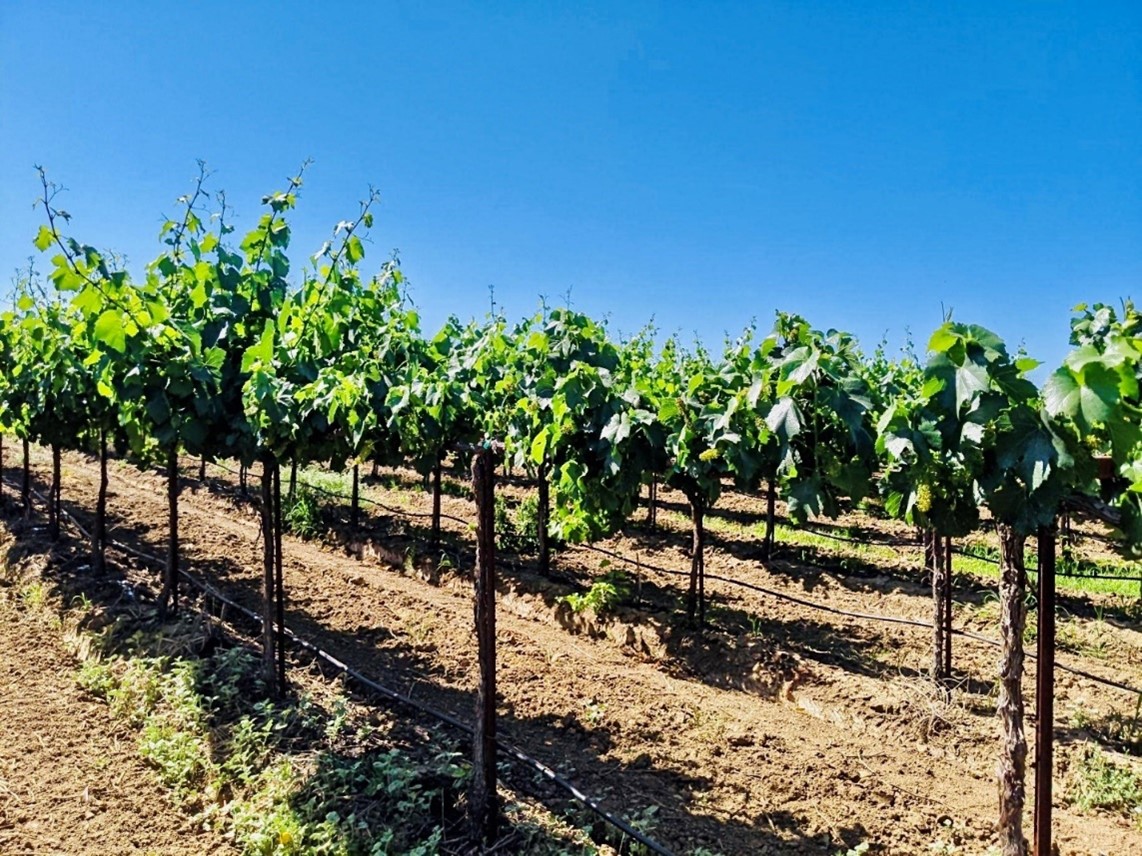 Stunted growth on Chardonnay vines planted in 2014. Photo was taken on May 11, 2021, and is courtesy of Lodi Grower Bruce Fry, Mohr-Fry Ranches.