The newest contributor to the Coffee Shop is Larry Whitted, an independent pest control adviser (PCA)based in Lodi. Larry graduated from the Pest Management Program at U.C. Berkeley in 1980 and now has 34 years of experience as a PCA working with fruit and nut crops throughout California and also in Chile, Argentina, Mexico and Egypt. He provides pest control advising service to 13 growers in Lodi, Clarksburg and Amador County who farm 6,000 acres of wine grapes. Larry also serves on the Research and Education Committee of the Lodi Winegrape Commission.

In addition to his PCA work Larry is also a professional mediator and in the off-season he mediates workplace and agricultural disputes in English and Spanish throughout California and Nevada. Another off-season activity is that he is a certified cross-country ski instructor. Besides fluent Spanish Larry also speaks conversational Greek, German, and Italian. 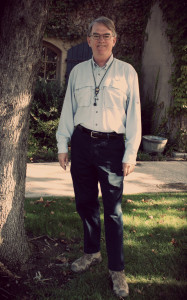 In my blog postings I will share with you, my soon to be faithful readers, what I have learned during my years as a PCA, both here in Lodi and around the world. Although I will be writing specifically about winegrapes, my experience with table grapes and other fruit and nut crops has also influenced my perspectives.

In this first posting I will explain why some of the information I will share on this blog will, in fact, be false. What is more, I will not distinguish between the true and the false information. The reason is, quite simply, because I can’t. Let me explain.

When I was a child in the early 1960s my mother used to get stomach ulcers. She went to her doctor and he told my father that the ulcers were caused by the way that my father spoke to my mother. Of course, the doctor was wrong.

Today, we know that he was wrong because in 1982 Australian scientists Barry Marshall and Robin Warren discovered that stomach ulcers are actually caused by the bacterium Helicobacter pylori, and not by how one person speaks to another. My mother’s doctor could not have known this because in the 1960s no one on earth knew it.

In these postings I will at times be like that doctor. I will tell you things that I believe to be true based on my many years of experience. However, future research may reveal, many years from now, that I was in fact mistaken and didn’t even realize it.

This has already happened. Years ago I used to recommend to grape growers in the southern San Joaquin Valley that they plant French prune trees around their vineyards in order to increase biological control of the grape leafhopper. They followed my advice. However, later research revealed that planting the prune trees didn’t work.

I am not a scientist and I don’t conduct replicated trials complete with untreated controls. I make observations, try different approaches, and draw conclusions. I will share those conclusions with you and you can decide for yourself if they are of value. On occasion I will mislead you just as my mother’s doctor misled her. It will not be intentional, but rather because our knowledge is incomplete and future research will lead us in new directions.

In my next posting, which will we published in November, I will explain how to maximize the use of biological control by natural enemies in Lodi winegrape vineyards. And I’m pretty sure that most of the information in that posting will actually be true!

Thanks for reading. I’m happy to discuss my Coffee Shop posts with you, address any comments and answer any questions you may have. I can be contacted by email at lrwhitted@aol.com or bt phone at (209) 327-6472.