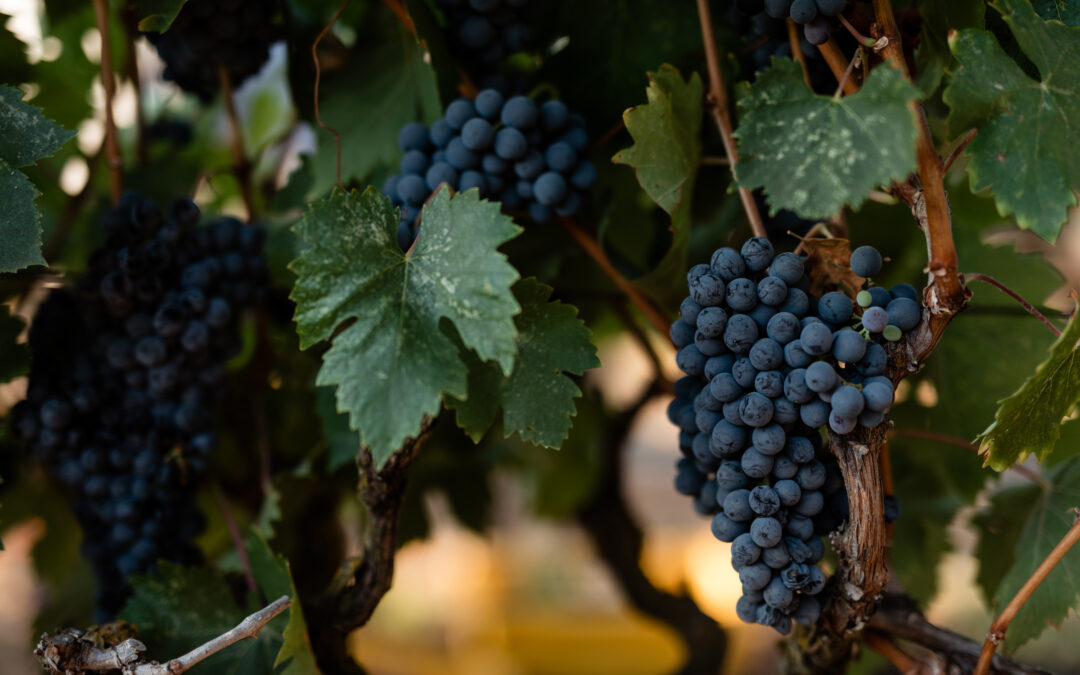 Fortunately for California vineyard managers, they have fewer foliar fungal diseases to contend with than vineyard managers in many other grape-growing regions of the world. Still, fungal disease control demands much of a California grape grower’s time and resources. Obtaining the greatest return on those investments involves an integrated management approach. Bunch rot, a prominent fungal disease in California, is no exception. Bunch rot fungi cause berries to decay during ripening, rendering them unusable for wine production while, at the same time, diminishing crop yield and value.

The disease triangle, a construct developed by plant disease specialists (plant pathologists), serves as a foundation for integrated bunch rot management, as well as the management of other fungal diseases. It involves three general factors that influence the incidence and severity of the disease. These factors are the host plant, the environment, and the pathogen (Figure 1). They are interrelated and for this reason, plant pathologists often think of them as connected by double-headed arrows along the sides of the triangle. 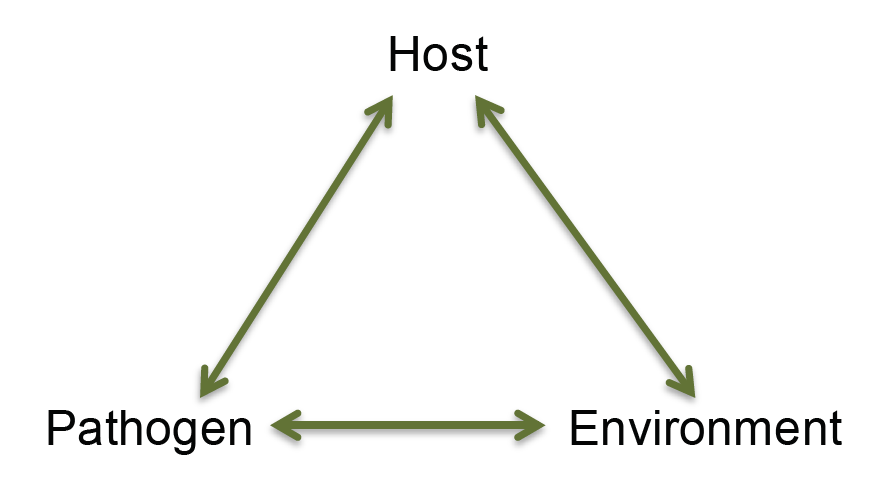 In this article, we will consider the integrated management of bunch rot based upon the relationships presented in the disease triangle. We begin with the pathogen.

The Pathogen – Types of Bunch Rot

In California, bunch rot comes in two basic types. Botrytis bunch rot is the best known of the two and it is the most prevalent type in cooler grape-growing areas (Figure 2).  A single fungus, Botrytis cinerea, causes this disease. Given sufficient moisture, Botrytis cinerea can infect berries directly as a primary invader. When provided a point of entry on a damaged berry, it can also act as a secondary invader. 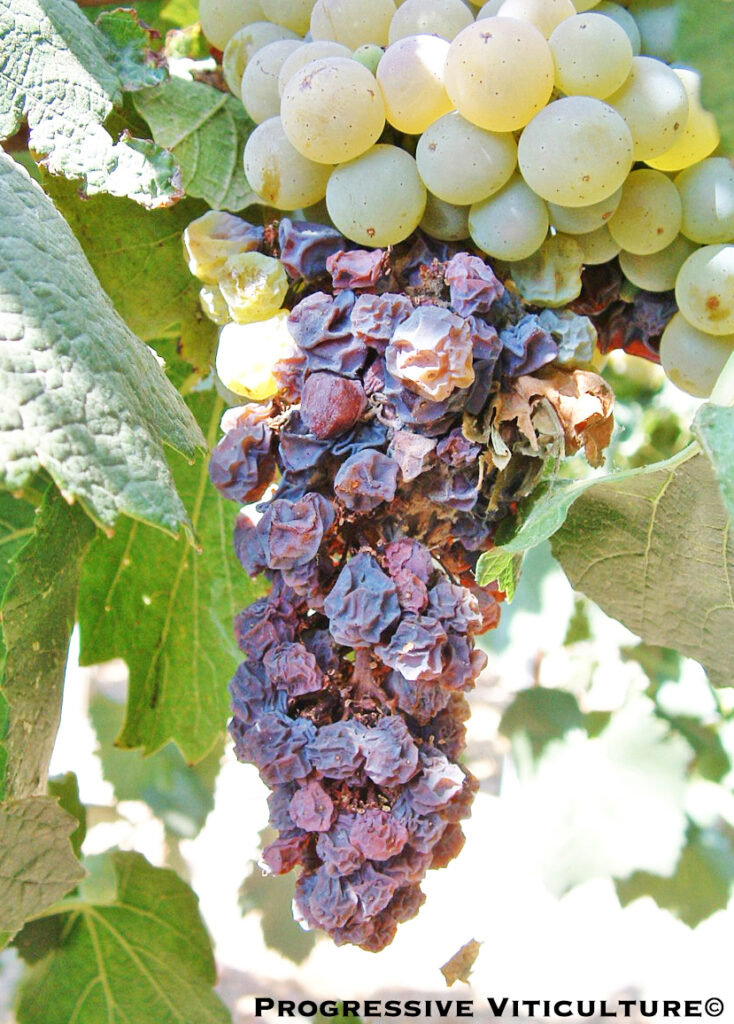 Summer rot is the other type of bunch rot (Figure 3). This disease thrives in warm temperatures. Summer rot usually involves more than one pathogen and, for this reason, the disease is sometimes called the summer rot complex. Sour rot is yet another name for this disease because it sometimes includes Acetobacter, a bacteria that produces vinegar smells. Summer rot organisms are mainly secondary pathogens, but under the right set of circumstances, a few may act as primary invaders. 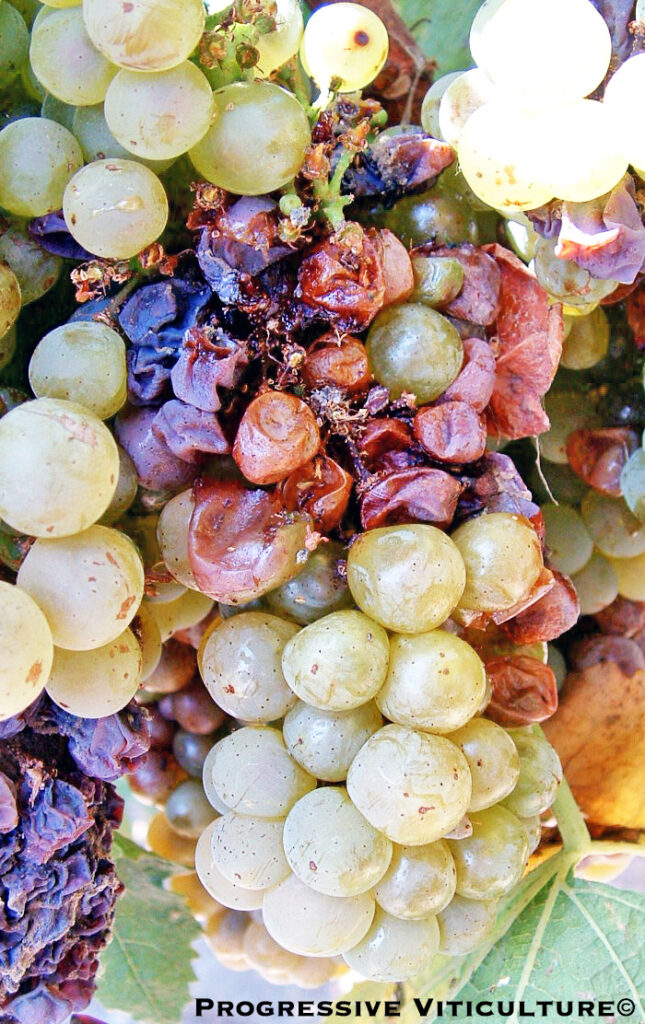 The Environment – The Importance of Air Movement

Among the benefits of drip irrigation compared to overhead sprinkler and surface irrigation is the potential for less fruit zone humidity. Even so, some drip-irrigated vineyards are more prone to bunch rot than others (Figure 4). Fruit zone humidity increases where drip irrigations are long or very frequent, especially for fruit zones below draping foliage located close to the drip hose. Altering irrigation schedules, using shorter or less frequent water applications, is the simplest remedy for such cases. In other instances, lowering the drip hose to the ground or burying it below ground are effective fixes. Repositioning the foliage more upright or repositioning the fruit zone higher above the ground are normally the most costly solutions for decreasing fruit zone humidity. 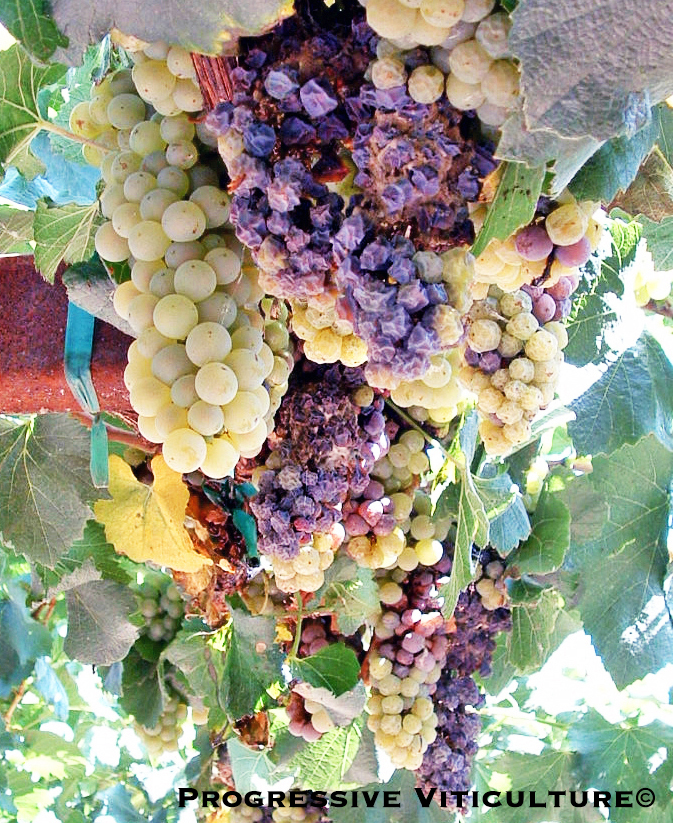 Figure 4. Even vineyards with open canopies can suffer bunch rot if the environment is otherwise favorable. (Photo Source: Progressive Viticulture©)

Some insects in the vineyard environment may also influence bunch rot. Certain caterpillars (Lepidoptera larvae) inhabit and feed on grape clusters, creating damage that promotes bunch rot. Orange tortrix is such a pest in coastal areas, while omnivorous leafroller (OLR) similarly functions in much of the California interior. While vinegar fly larvae can feed on damaged berries, their greater impact is as adults transporting bunch rot pathogens from infected to uninfected clusters, including Acetobacter mentioned above.

Not all varieties are created equal with regard to bunch rot. Some appear nearly immune while others are highly susceptible. The basis for these differences lay within clusters.

Varieties with dense, tightly packed clusters are especially prone to bunch rot. Such varieties include Zinfandel, Petite Sirah, Chenin blanc, and Sauvignon blanc. The comparative early and extensive contact between growing berries on tight clusters inhibits the development of the protective cuticle layer on the exterior of berries, increasing their vulnerability to infection. 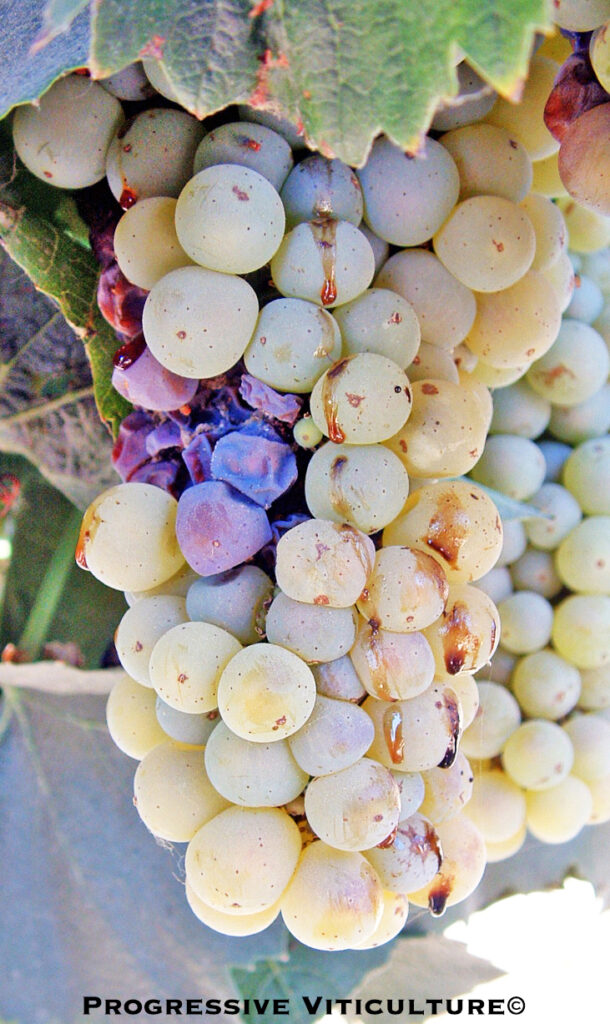 The environments within-cluster interiors, like fruit zones on a smaller scale, benefit from the cooling and drying effects of air movement, which is limited within dense clusters. Such air movement is especially important after a ripening period of rain. Accordingly, tight-clustered varieties often require environmental modification measures beyond canopy manipulations to minimize bunch rot.

These measures begin when planting a new vineyard. First, select a clone known to have relatively loose clusters, such as the Primitivo clone of Zinfandel (Primitivo-03) or Chenin blanc-04. Some rootstocks are also known to promote loose clusters, including St. George and Dog Ridge. And as mentioned above, locate fruit zones high and away from drip lines, and provide foliage support to position shoots above fruit zones.

In established vineyards, delay crop thinning until near or during veraison and use deficit irrigation schedules to limit berry size. Consider a well-timed prebloom gibberellin application at an appropriate concentration to enhance cluster elongation and allow more space between berries. After initiating irrigations, apply them no more frequently or longer than necessary to avoid severe grapevine water stress. Control powdery mildew, limit worms, and avoid late-season activities that jostle vines to minimize mechanical damage to berries.

After bloom, dead flower parts adhering to clusters support microbes, some of which are involved in bunch rot. Consequently, when dead flower parts are present in abundance, post-bloom fungicide applications to the fruit zone are appropriate to control disease inoculum.

Three primary factors influence foliar fungal diseases like bunch rot. They are the host, the environment, and the pathogen. In many circumstances, managing the fruit zone environment is sufficient to control botrytis bunch rot and summer bunch rot. Environmental management actions involve grapevine canopies and vineyard water. For certain vineyards, environmental management alone is not enough, and disease control requires additional measures involving the host. They may include clones, rootstocks, gibberellin, insecticides, and fungicides.

A version of this article was originally published in the Mid Valley Agricultural Services August 2005 newsletter and was updated for this blog post.

Thomas, C. S., J. J. Marois, and J. T. English. The effects of wind speed, temperature, and relative humidity on the development of aerial mycelium and conidia of Botrytis cinerea on grape. Phytopathology. 78, 260-265. 1988.