How to Maximize Biological Control in Lodi Vineyards

Most of the pest control that occurs in Lodi wine grape vineyards consists of biological control by natural enemies rather than by the use of pesticides. By “natural enemies” I am referring to naturally occurring parasites and predators that are carnivores and eat the herbivores, or plant-eating insects and mites, that live in the vineyards. 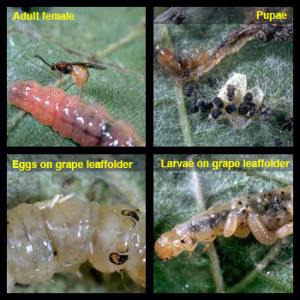 Photo and caption from UC IPM: Bracon cushmani adults are small wasps, less than 1/8 inch long with a slender abdomen longer than the head and thorax combined. B. cushmani undergoes complete metamorphosis and is a gregarious ectoparasite. After stinging and paralyzing leaffolder larvae, female B. cushmani lay from one to several eggs on the body of leaffolder larvae.B. cushmani larvae feed externally and, after completing their development, pupate next to the consumed host. Parasitism by this parasite frequently reduces second and third generation populations to below economic levels.
To detect parasitism, look for leaffolder caterpillars with many small wasp larvae clinging to their backs.
B. cushmani is one of about 100 species in the Bracon genus that occur in the United States.

Similarly, very few vineyards in Lodi need to be sprayed to control the grape mealybug because it, too, is effectively controlled by natural enemies. These beneficial insects maintain the grape mealybug at such low levels that in any given year most growers never even notice that they have any grape mealybugs in their vineyard.

Because these naturally occurring beneficial insects and mites work seven days per week at no cost to the grower, it makes sense to ask what you can do to maximize their use and therefore minimize the use, and expense, of pesticide applications. Many ideas have been proposed to increase biological control such as the use of cover crops, insectary plants, hedgerows and purchasing and releasing natural enemies. However, in my experience there is one technique that is more effective than all of the others combined.

The most effective technique for maximizing the use of biological control by natural enemies is to not kill them. If you don’t kill them then they will increase in number and provide you with free pest control seven days per week. This, in turn, will reduce the number of pests that you need to spend time and money to control. Let me explain how to “not kill them.”

Although biological control provides most of the pest control in Lodi vineyards, it doesn’t provide all of the pest control. A few times per year a grower may need to spray a pesticide to control a pest that is not being effectively controlled biologically. The key in that situation is to choose a pesticide that, in addition to controlling the target pest, does not also kill the natural enemies of that and other pests.

Carl Huffaker, one of the founders of Integrated Pest Management, once said: “When we kill off the natural enemies of a pest, we inherit their work.” He was trying to remind us to remember to preserve the natural enemies who are working on our behalf, for free and seven days per week.

For example, when choosing a miticide to control Willamette or Pacific spider mites the grower has a number of miticides to choose from. It is important to choose a miticide that does not kill the natural enemies of these mites. One of these natural enemies, the six-spotted thrips, can be seen in the below photo. The nymphs and the adults of this thrips feed on both Willamette and Pacific spider mites. 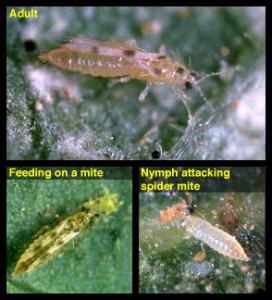 Photo and caption from UC IPM: Thrips are tiny, 2-3 mm (less than 1/8 inch) in length, slender insects with long fringes on the margins of their wings. Thrips undergo incomplete metamorphosis, have multiple generations per year, and can be phytophagous or predaceous. Sixspotted thrips adults can be distinguished from other species by the three dark spots on each wing cover of the mostly pale-yellow adult. Nymphs are translucent white to yellow and difficult to discern from other thrips species. Adults and larvae are entirely predaceous, feeding most commonly on mites such as the European red mite, cyclamen mite, and Tetranychus spp. spider mites. Sixspotted thrips can rapidly reduce high mite populations, but often don’t become numerous until after mites have become abundant and damaging.

If you don’t know which of the pesticide options available to you harm natural enemies and which don’t it is very easy to obtain that information. The University of California Integrated Pest Management web site has a chart entitled “Relative Toxicities of Insecticides and Miticides Used in Grapes to Natural Enemies and Honey Bees.” The chart is available HERE.

By using this chart you can compare the effect on natural enemies of the various pesticide options available to you to control the pest that you are concerned about. Simply make a list of the pesticides that are effective on the target pest that you are trying to control. Then look each of those pesticides up on the chart and you can see the effect of each one on predatory mites, general predators and parasitic wasps. The chart will also tell you how long the impact of the pesticide on natural enemies will last.

The chart, although very useful, was last updated in 2008. Therefore, for information on newer pesticides you may want to consult someone with field or research experience with newer pesticides and their effect on natural enemies.

In my next posting, which will be published in December, I will discuss why it no longer makes sense to recommend and apply pesticides on a “per acre” basis in modern vineyards and why entire countries have abandoned that practice.

Thanks for reading. I’m happy to discuss my Coffee Shop posts with you, address any comments and answer any questions you may have. I can be contacted by email at lrwhitted@aol.com or by phone at (209) 327-6472.