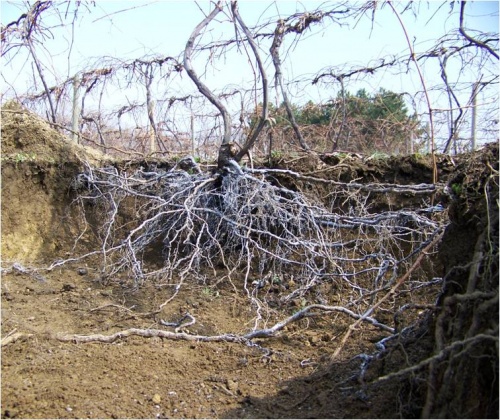 Compared to the above-ground portions of a grapevine, root structure and function is more of a mystery to most growers.  Roots extract nutrients and water from the soil, and are also the dominant storage organ for carbohydrates and nutrients (vine reserves) in the dormant season.  They also provide physical support for the vine and produce hormones that regulate vine growth and the vine’s response to environmental conditions.

Researchers estimate that vines allocate 30 to 60% of photosynthate to root growth.  On a mature vine, the surface area of roots is estimated to be somewhere around 100 m2 – compared to 10 m2 of above-ground leaf area.  While most ‘fine roots’ that absorb water and nutrients are concentrated in the top meter of soil, a portion of the roots can grow to great depths (up to 30 m), and extend out several meters from the base of the vine.

Vines attempt to maintain a root:shoot ratio within a reasonable range, and vine size is highly correlated with the size of the root system.

Commercial vines are propagated vegetatively, and roots initially form as outgrowths of the cutting’s cambium layer under conditions of high humidity.  On rooted cuttings, they generally form near a shoot node.   These become the main structural roots, which branch off into lateral (secondary and tertiary) roots.

Lateral branches can form at any location along the root system, and their formation depends upon the vine’s ability to detect environmental cues (water, nutrient availability) and extend to those regions.   Unlike shoots and leaves, which have a pre-programmed and predictable arrangement, the growth and branching patterns of roots are highly flexible – and very responsive to local soil conditions.

Growth originates at the meristem of the root tip, where cell division occurs, which is covered by a slimy ‘root cap’ that protects the shoot from abrasion by soil particles. Behind this zone, there is a cell ‘elongation zone’, where the cells begin to form two layers. The outer layer is the cortex, where nutrient uptake and storage occurs.  The inner ‘stele’ differentiates into the xylem and phloem, responsible for transporting water and nutrients up and down the plant.

Maximum uptake occurs several millimeters behind the root tip, where numerous root hairs are formed that greatly increase surface area for absorption.  Further away from the root tip, these outer layers and root hairs are worn away, leaving the central stele and its vascular system for transport to the trunk, shoots, and other vine parts.  A layer of cells outside the xylem develops into the cambium, which increases the diameter of the roots and can initiate new lateral root meristems.  An exterior ‘cork cambium’ forms, and develops the outer hardened cell layers that contain subarin – a waxy, water-resistant substance that forms a barrier between the root’s conducting tissues and the soil.

Fine roots form associations with mycorrhyzal fungi – a symbiotic relationship where the fungus enhances uptake of nutrients from the soil – and in turn get supplied with carbohydrates from the vine’s photosynthesizing leaves to support their growth and development.

In dormancy, cells surrounding xylem vessels in the roots are stuffed with starch and nitrogen, which is deposited starting around veraison but also mobilized from leaves as they senesce in the fall.  These reserves are what fuels early canopy development in the spring.

The first visible sign of the vine’s transition from dormancy to active growth is often sap flow or ‘bleeding’ of xylem sap from pruning wounds.  The driving force behind this sap flow is metabolic activity in root tissues as the soil warms up in the spring.   As stored starch and proteins are converted into sugars and amino acids, they are released into the xylem.  The resulting osmotic pressure (from the high concentration of sugars in xylem sap) draws water into the roots, and is enough to lift water (and nutrients) to the shoot tips – where it rehydrates buds, beginning the process of bud swell.

As buds start to swell, shoot tips produce auxins that are eventually transported (through the phloem) down to the roots to stimulate root growth.  These interact with giberellins produced at the root tips (promoting cell elongation).   This process takes time, because the dormant buds are isolated from the vine’s vascular system, and need to reconnect– a process that is thought to be completed around bloom (see How Grapevines Reconnect in the Spring).

So root growth lags behind shoot growth in the spring – and the dry weight of roots actually declines between bud burst and bloom, as stored reserves are mobilized to support early season shoot growth. As the canopy emerges, root growth speeds up, reaching a peak between bloom and early fruit development, then declining gradually during fruit ripening.

Although root biomass increases from its low point around bloom until leaf fall, much of the biomass is concentrated in larger, permanent structural roots.  Fine roots are where the uptake of nutrients and water occur. They are short-lived (<5 wk) and frequently replaced – quite likely because they exhaust local nutrient and water supply.  As the grapevine canopy becomes well-established after bloom, a portion of the photosynthate returns to the roots and replenishes vine reserves – a process that accelerates as fruit ripens, periderm forms and canopy growth ceases.

Response to Environmental Stresses and Management

The vine’s root system is hidden underground, but its growth and overall ‘share’ of the photosynthates assimilated by the vine is critically important to the health and development of the above-ground shoots, leaves, and fruit.  Roots take up nutrients, supply water, provide support, and produce hormones that regulate overall vine growth.  They form a symbiotic relationship with mycorrhizal fungi – which enhances nutrient and water absorption beyond what the roots themselves could supply.  They have a flexible growth habit that is responsive to variable soil conditions.  They are the most important storage organs that provide the sugars and nitrogen that fuels early-season vine growth.  Although we can’t often directly observe them, their functions are equally as important as the canopy and fruit that producers intensively manage.  And they do it mostly without interference from us.