How California Farms Measure Up in the 2012 Census of Agriculture: Smaller in Size with Higher Value of Production 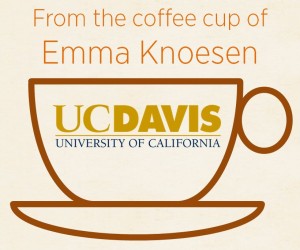 The 2012 Census of Agriculture was released in early May 2014. Average farm size continues to grow in terms of acreage and market value of production. However, this trend is not universal across crop category or geographic region. For the crop category of Land Used for Vegetables, the average acreage allocation per farm reporting production in this category decreased, while certain counties in California experienced an increase in the average acre allocation.

Conducting an agriculture census has been a longstanding activity of the federal government. The 2012 Census of Agriculture was the twenty-eighth U.S. agriculture census. The first agriculture census was in 1840 and a new one has been conducted every five years since 1920. The aim of the census is to provide detailed information on U.S. farms and ranches and their operators to the public, businesses, the government, and analysts. The census summarizes information at the national, state, and county levels. Some information is not reported publicly in order to maintain confidentiality regarding individual operations.

This article was originally published by Emma Knoesen and Rachael Goodhue in ARE Update, Vol.17, No. 5, May/June, 2014. The issue can be accessed by clicking HERE. The ARE Update is a bimonthly magazine published by the University of California Giannini Foundation of Agricultural Economics for the purpose of providing wide dissemination of research results and expert opinion from faculty and graduate students in agricultural and resource economics at UC Davis and UC Berkeley.

The Census of Agriculture enables the comparison of California agriculture to U.S. agriculture. The 2012 census indicates that differences between the two, regarding farm size by acreage and market value of agricultural products, were consistent with the differences reported in 2007 and earlier recent censuses. We focus here on comparing these characteristics in 2012. 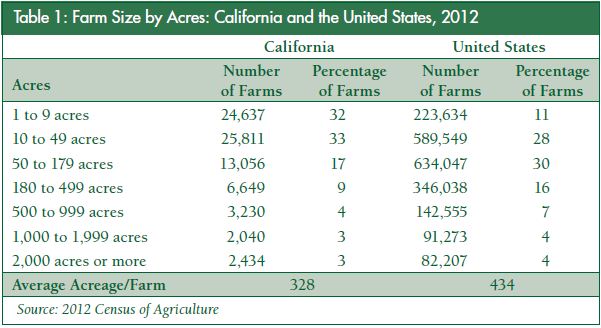 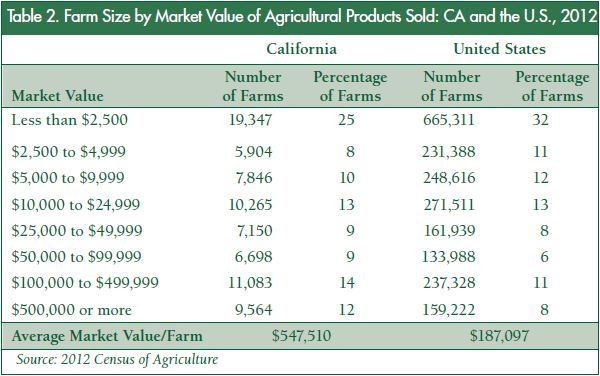 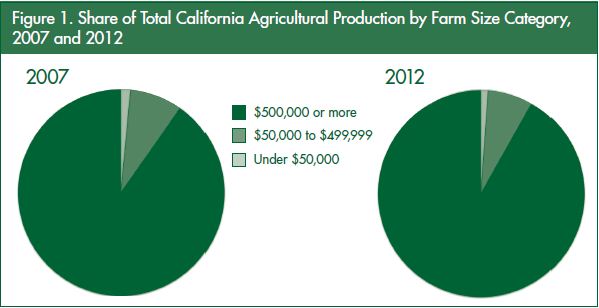 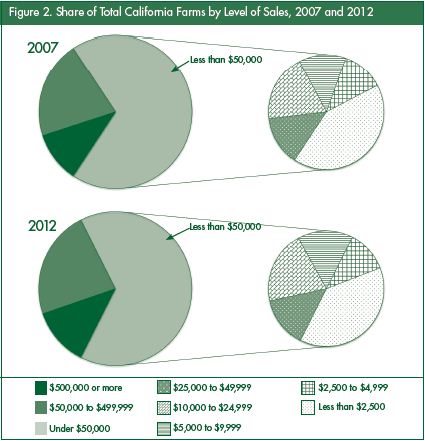 The census reports the number of farms and acres by crop category. This information allows analysis of the land allocated to and the number of farms producing a specific crop. Here, we report changes in farms with orchards and farms with vegetable and melon production. The definitions used in the census are important for this analysis. For a given crop category, the number of farms is all farms that reported producing that crop, and the acres are the cumulative acres reported for that category. If a farm harvested two or more crops in different categories from the same land, the acres and the farm itself were counted in each crop category. However, if two or more crops in the category Land Used for Vegetables (LUV), which includes all vegetables and melons, were harvested from the same acreage, then the census only counts the acres once. Land in Orchards (LO) includes all acreage with fruit trees, citrus or other groves, vineyards, and nut trees of nonbearing and bearing age, regardless of whether or not it was harvested.

Over the five years between 2007 and 2012, LUV and LO experienced opposite changes in farm size and number. As exhibited in Figure 3, the number of farms with LUV increased by 57%, while acres allocated for vegetables or melons increased only 2%; in 2012, the farms tended to allocate less acres to this category than in 2007. The average acres allocated as LUV per farm decreased from 251 acres in 2007 to 163 acres in 2012. In contrast, the acres allocated as LO per farm grew in size. The number of farms with LO decreased by 4% while acres in LO increased by 10% from 2007 to 2012. This change resulted in an increase in the average acres of LO per farm from 72 acres in 2007 to 82 acres in 2012, or an increase of 13%.

The census provides data on a county level as well. These data enable the comparison of trends on the county, state, and national level. Here, we link the statewide trend of smaller acreage allocation per farm in LUV to developments in major vegetable- producing counties. Of the top ten counties in LUV by acreage, only six experienced a decrease in the average allocation of acres to LUV:Fresno, Kern, San Joaquin, Merced, Yolo, and Santa Barbara.

Table 3 illustrates that four of the top ten vegetable-producing counties in 2012 realized an increase in average vegetable acreage per farm: Monterey, Imperial, Riverside, and Ventura. In Monterey County, the number of farms with LUV increased from 202 in 2007 to 210 in 2012, while the acres allocated as LUV increased from 163,237 acres to 189,644 in that same time. As the county with the largest acreage of LUV in 2012 and the second largest in 2007, Monterey realized a 12% increase in the acre allocation per farm. 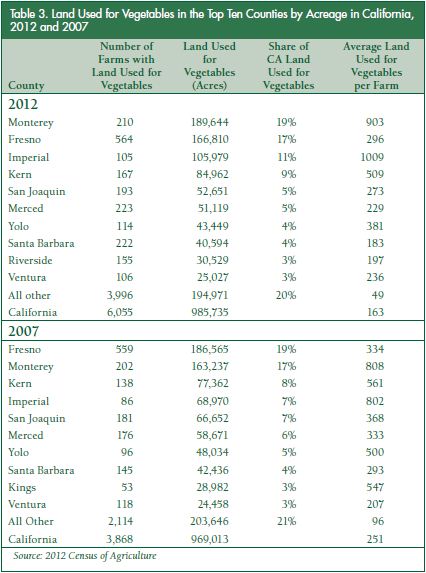 However, the trend towards larger farms was not universal across all farm types—at least not when measured in acres. LO followed the national as well as state trend with the average acreage allocated by each farm to orchard production growing by 13%. Land Used for Vegetable followed a different trend, with a smaller acre allocation per farm producing vegetables and melons in 2012 than in 2007. The number of acres per farm with LUV decreased just over 35%.

However, this trend was not consistent in every county in California. Some counties, such as Imperial and Monterey, with some of the largest total acreage of LUV, experienced an increase in their average acre allocation per farm. Other counties, such as Fresno, Santa Barbara and Yolo, experienced a decrease in their average acre allocation to LUV per farm, similar to the state trend. The 2012 Census of Agriculture confirms that the agricultural landscape of California is diverse and general trends do not hold for all commodities.