When I was a pest management student in college I had a Chilean-born professor named Leo Caltagirone. He used to tell us that we should always focus on the crop that we were working with rather than the pests. The reason he said this was because of the natural tendency of entomologists, plant pathologists and weed scientists to focus on their particular class of organisms rather than the crop that the farmer is trying to produce.

I’d like to discuss the effect of different herbicides on the yield of grapevines. In other words, in addition to controlling weeds, do some herbicides also reduce the yield of the vineyards where they are applied? The problem is that I can’t discuss this subject scientifically because most weed control researchers do not also collect yield data. This is a gap in herbicide research.

Let’s take a look at some examples of other areas of agricultural research that looked not just at efficacy or visual symptoms, but who also collected yield data. In 1979 and 1980 U.C. Riverside researcher Frank Sances investigated the effect of various insecticides on lettuce head weight and diameter. He found that certain insecticides when applied at normal rates did not produce any visible damage to lettuce, but did reduce yields. The insecticides did not visually appear to be phytotoxic, but they did affect photosynthesis and yield. If insecticides can do this, isn’t it worth investigating whether the same can happen with herbicides? After all, herbicides are designed to have an effect on plants and insecticides aren’t.

In 1986 U.C. plant pathologist Beth Teviotdale conducted research on the efficacy of various fungicides to control shot hole disease on almonds in Kern County. She applied 3 applications of Ziram to some trees and 3 applications of Ziram plus a dormant copper spray to other trees. When she compared the number of shot hole lesions on the leaves there was no statistical difference between the two treatments. However, when she measured the yield per tree there was a statistical difference, with the trees receiving the dormant copper spray yielding 5 pounds more nutmeats per tree. Just looking at visual symptoms would not have revealed the yield difference.

Another example is the research conducted by U.C. Davis researcher Patrick Brown from 1994 through 1996 on almonds. He applied foliar boron sprays to almond trees that showed no visible symptoms of boron deficiency while leaving other trees untreated. The treated trees had increases in yield of 20-40%, even though they showed no deficiency symptoms prior to the boron application. This shows, once again, the importance of measuring yield rather than just visually observing signs of phytotoxicity or nutrient deficiency. 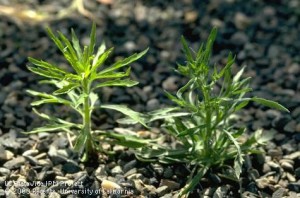 Herbicide labels often prohibit their use on young vines or on certain soil types in order to avoid phytotoxicty to grape vines. However, what about yield effects that are subtler than obvious symptoms on the leaves? If researchers don’t collect yield data when investigating herbicide efficacy, how can the grower make an informed decision regarding which herbicide to use?

Weed science researchers need to remember that the ultimate objective of the grape grower is to produce grapes, not to control weeds. Controlling weeds is just a means to that end, not the end itself. Without yield data we can’t know if a particular herbicide contributes to vineyard production or hinders it.