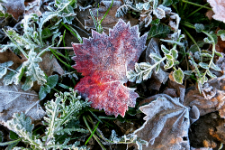 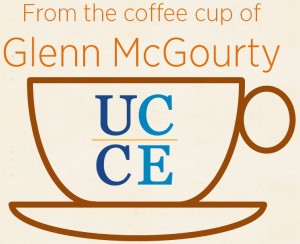 Plant microbiomes are a topic of microbiology research that is rapidly growing with numerous new discoveries. Like humans, plants are covered with microbes that serve many functions from assisting with absorbing nutrients, protecting plants from pathogens, and other activities. We really don’t completely understand how these microbe and plant relationships work. Some we understand quite well, such as the relationship between Rhizobia and legumes. The bacteria live in the roots of the host legume in specialized structures known as nodules in which the bacteria can convert atmospheric nitrogen into nitrogenous compounds that the host plant can use. Endophytic fungi in roots can inhibit pathogens, and make the plants less palatable for herbivores ranging from insects to grazing livestock. Mycorrhizae fungi form mutualistic relationships in plant root systems and can perform functions ranging from absorbing nutrients from the soil, such as phosphorus for grape vines, to helping plant communities release volatile organic compounds that are produced when plants are attacked by insect pests, signaling predators and parasitoids to in turn attack the plant pests. Genomics and other laboratory analytical equipment will no doubt give us considerable new insight in the coming years on these many intriguing and complex relationships.

An area in which I have studied with Dr. Steve Lindow from the Department of Plant and Microbial Biology at UC Berkeley is understanding how frost forms on grapevines. In order to do this, we have been investigating the micro ecology of vineyards and their relationship to cover crops and adjacent vegetation. Frost forms in the presence of moisture, temperatures at or below 32˚F, and ice nucleating bacteria. There are six bacteria known to nucleate the formation of ice crystals, and Pseudomonas syringae is the most prevalent in vineyards. There are proteins in their outer cell walls that catalyze the formation of frost. In the absence of these bacteria, plants can super cool to as low as 23˚F without damage to tissue. The more ice nucleating bacteria that are present, the more likely that frost will form on the plant surface. On the surface of plant material, bacterial populations vary from lows of thousands to tens of millions of cells per gram of tissue. 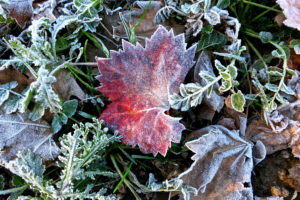 We often thought in the past that the idea of having clean tilled vineyard floors that were firm and moist was the best strategy to prevent frost in vineyards, especially when other frost protection systems weren’t available (wind machines and overhead sprinklers). The belief was that it was heat transfer from the soil to the air that kept the vineyard from freezing. The worst case scenario was to have tall cover crops or weeds in the vineyard, as this could lower the temperatures in the vineyard by as much as 4˚F compared to clean cultivation. This is definitely true, and a contributing factor to making your vineyard less likely to freeze.

Dr. Lindow’s work in the 1980’s showed that ice nucleating bacteria were present in vegetation growing on the floor of orchards and vineyards. When bud break occurs in deciduous plants, the emerging foliage is essentially sterile. Ice nucleating bacteria from surrounding vegetation moves by wind and air currents to populate the surfaces of the newly emerged vegetation on the trees or vines, and frost risk begins to increase. If the bacteria can be controlled with antibiotics or copper compounds, frost risk is reduced by as much as 3˚F.

It turns out that cover crops and weeds may have very differently sized populations. Plants with waxy cuticles such as field peas and bell beans have much fewer bacteria that many grasses. By comparison, grasses support large populations. This can be explained by the amount of exudates that are found on the surface of the cover crop leaves. Exudates are considered to be the currency of microflora—the more a plant exudes, the larger the population of microbes that can be supported. Mostly, the exudates contain sugars and other carbohydrates.

*Note: every change in number indicates a 10 fold increase in bacteria

Dr. Lindow and I are currently investigating whether copper sprays can protect emerging grape vine tissue from freezing, and how vineyard floor management may affect ice nucleating bacteria numbers in the plant. Funded by a California Department of Food and Agriculture Specialty Crop Grant, we have 2 large 6 acre plots broken down into 4 replicated treatments.  We are comparing copper sprays applied about every 5 days following bud break to just the emerging grape vine tissue during the frost season (late March to late May) to no copper sprays; the plots are then split with some being closely mowed and some not mowed.  One plot is located at Roederer Estate US vineyards in Philo, Mendocino County, and the other is located at Beckstoffer Vineyards near Kelseyville, Lake County.  The two sites are quite different, as Philo is surrounded by oak and redwood trees, being only 14 miles from the Pacific ocean. The Lake County site is located on the base of Mt. Konocti, a dormant volcano, and surrounding vegetation consists of chemise and other chaparral plants, and at an elevation of about 2,000 feet.

Our first year of data showed that first, this was a great year for bacteria on cover crops with all of the rain fall. In general, populations were much greater in Philo than Kelseyville, perhaps due to more humidity in Mendocino County.  Secondly, we didn’t see much difference between bacterial populations on grape vines growing in the mowed and unmowed treatments.  We did see very big differences in bacterial populations in the vines treated with copper compared to the untreated vines. Frost did not occur this spring in either vineyard.  However, we sampled shoots every week and in the laboratory, we could simulate freezing under temperature controlled conditions.  The copper treated shoots were able to supercool on average by about minus 3˚F compared to the control.  Ice nucleating bacteria were also reduced by as much as 10 fold.

Finally, in a separate experiment, we looked at the effect of mowing. It turns out that when you mow, you disperse bacteria all over everything!  We did this by placing petri dishes in the vine canopy with selective agar media to catch bacteria that is dispersed in the air.  Following mowing, there was an almost 2 fold increase of bacteria in the plates sampling from the mowed plot.

We will continue this project for at least another year and hopefully learn more about the best ways to manage vegetation in a vineyard to protect it from freezing. 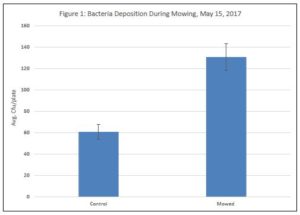 The author, Glenn McGourty, is the Winegrowing and Plant Science Advisor for UCCE Mendocino and Lake Counties.  This article was originally published in the October 2017 CAPCA ADVISER Magazine and we were graciously given permission for it to be published here.