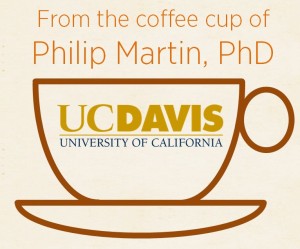 California has a unique agricultural sector that has led the nation in farm sales since 1950 because of the importance of high-value FVH commodities. The COA defines a farm as a place that normally sells at least $1,000 worth of farm commodities a year. Most of the 2.1 million U.S. farms and the 78,000 California farms are part-time, hobby, and retirement operations that lose money farming but survive because of income from nonfarm jobs, social security, and other sources.

The COA reported that over half of U.S. farms, almost 1.2 million or 56%, each sold less than $10,000 worth of farm products in 2012, and they collectively accounted for $3 billion or less than 1% of the $395 billion in total farm sales (Figure 1). At the other end of the farm-size spectrum, the 81,600 U.S. farms that each had farm sales of $1 million or more in 2012, less than 4% of farms, collectively accounted for $264 billion or two-thirds of total farm sales. Most farm commodities are sold by these relatively few large farms.

FVH commodities account for a quarter of U.S. farm crop sales but over 85% of California crop sales. In 2012 California sales of fruits, nuts, and berries were $17.6 billion, vegetable and melon sales were $6.3 billion, and nursery and greenhouse sales were $2.5 billion—for a total of $26.4 billion.

California is the leading farm state because it produces almost half of U.S. fresh fruits and vegetables, many of which are labor-intensive.

The COA asks farmers to report their expenses for hired labor, including the number of workers they hire directly and the cost of wages, payroll taxes, and job-related benefits. In addition, the COA asks for the cost of workers brought to farms by farm labor contractors and other nonfarm businesses that provide workers and sometimes equipment to perform farm tasks. Some 566,000 U.S. farms reported $27 billion in hired labor expenses in 2012, making hired farm labor 8.2% of farm production expenses. Some 217,000 farms (often the same farms that had hired workers directly) reported $6.5 billion in contract labor expenses,
2% of total farm production costs.

This article was originally published by Philip Martin in ARE Update, Vol.17, No. 6, July/Aug, 2014. The issue can be accessed by clicking HERE. The ARE Update is a bimonthly magazine published by the University of California Giannini Foundation of Agricultural Economics for the purpose of providing wide dissemination of research results and expert opinion from faculty and graduate students in agricultural and resource economics at UC Davis and UC Berkeley.

The COA asks farmers to report how many workers they hired directly, including family members on the farm payroll. In 2012 U.S. farmers reported hiring 2.7 million workers, including 1.7 million who were employed on their farms for less than 150 days, making seasonal workers 60% of individuals hired. Any worker employed seasonally on two farms is counted twice, although there is no duplication of wages in the reporting. California farmers reported 465,400 directly hired workers, including 260,000 or 56% who were seasonal workers.

The COA reports two more farm labor items. First, it asks farmers if they hired any migrant workers, defined as persons whose farm jobs prevented them from returning to their permanent place of residence the same day. U.S. farmers reported hiring 402,000 migrants directly, making 15% of their hired workers migrants while California farmers reported 119,000 migrants, making 26% of directly hired workers migrants. However, farm employers may not know the permanent residence of their workers.

The COA provides data on farm labor expenses in 2012, but farm worker employment data are reported only for workers hired directly by farmers. Nonetheless, the average number of full-time equivalent jobs in agriculture can be estimated by dividing the labor expenses of farmers by the average hourly earnings of workers to estimate hours worked. If hours worked are divided by 2,080 to get FTE jobs, average farm employment can be compared to average nonfarm employment.

Clearly, average agricultural employment is not a count of farm workers. Defining a farm worker as a person employed for wages in agriculture sometime during the year, there were about 2.5 million hired farm workers when USDA analyzed a December supplement to the Current Population Survey that was discontinued in the late 1980s, suggesting two farm workers per FTE or year-round job.

In California, a special analysis of all Social Security Numbers reported by the state’s agricultural employers found a million unique SSNs in 2001, when aver- age employment was 388,000, suggest- ing 2.5 workers per job. The number of workers employed sometime during the year exceeds average employment in seasonal industries with employment peaks and high turnover such as agriculture.

California dairy farms, which spent $635 million on hired labor in 2012— over 90% for directly hired workers. Half of the dairies spent more than $250,000 on hired farm workers, and a quarter hired workers via contractors. FVH farms and dairies combined accounted for 86% of California’s labor expenses for directly hired workers in 2012 and 94% of contract labor expenses. USDA reports labor data for seven crops and seven livestock commodities, from grains and cotton to beef and poultry, but in California four commodity groups account for almost all farm labor expenses.

The importance of FVH commodities in California agriculture makes the state the leader in farm sales. Farm production and farm worker employment are concentrated on a relatively few large farms across the U.S. and
in California, and estimates using COA data suggest that average farm employment is expanding faster in California than in the United States. In California, four of the 14 commodity groups for which the COA reports labor expenses, vegetables and melons, fruits and nuts, greenhouses and nurseries, and dairies, accounted for 86% of farm labor expenses in 2012.

Farm labor is often in the headlines, as exemplified by reports of farm labor shortages due to fewer newcomers from Mexico, unemployment in farm worker communities due to the drought, and the July 1, 2014 increase in the California minimum wage from $8 to $9 an hour. The COA, which provides the most complete profile of the state’s agriculture, suggests that farm employment is growing and will continue to garner media attention.