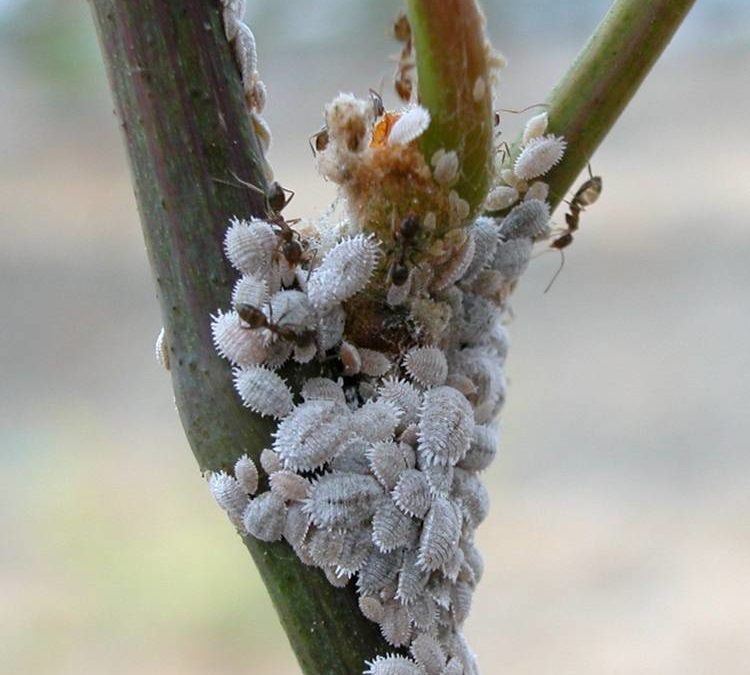 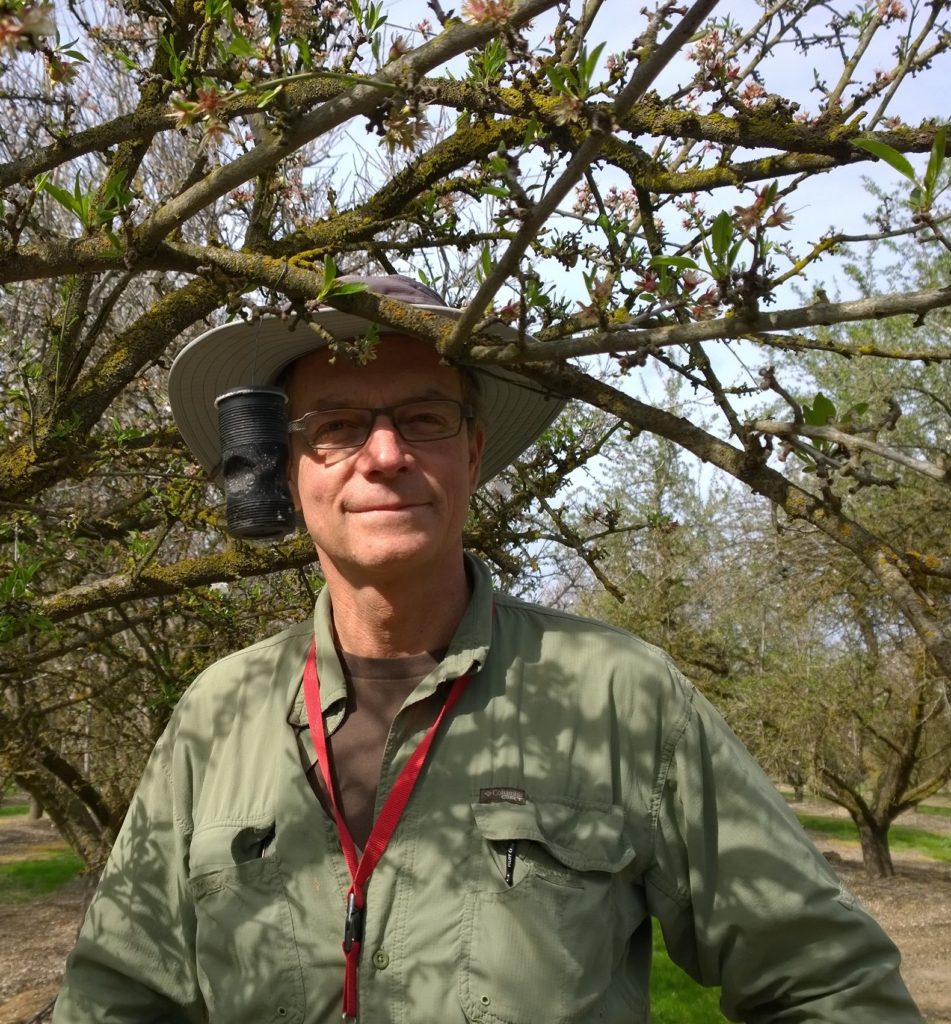 Kris Tollerup has worked as a University of California Cooperative Area-wide IPM Advisor since October of 2013.  He is stationed at the Kearney Agricultural Research and Extension Center in Parlier.  Dr. Tollerup’s work occurs primarily in the Kings, Tulare, Fresno and Madera counties and focuses on arthropod integrated pest management, on almond, grape, pistachio, and stone fruit.  Recent projects include: Developing a better understanding of navel orangeworm male moth capture in almond using sex pheromone traps, improving early-season monitoring of leaffooted bug, improving IPM of spider mites on almond, and improving monitoring and management of ant in almond and grape.  The overarching focus of Dr. Tollerup’s program is to develop and implement long-term ecologically and economically sound IPM programs, including sampling and monitoring, and the integration of cultural, chemical, and biological control management strategies.  Kris has worked in several other cropping systems including apple, avocado, citrus, and peppermint.

During the 2019 growing season, the Lodi Winegrape Commission funded an ant bait research trial led by Dr. Tollerup – the results are below.

The geographical area of California has approximately 300 described ant species including 30 introduced or non-native species.  Of the 300 species, relatively few pose an economic threat to agricultural crops.  Ants cause economic loss either directly by feeding on the salable part of the crop or indirectly by tending honeydew-producing hemipterans, such as aphids, soft scale, and mealybugs.  It is important to note that although different ant species prefer sugars or fat/protein-based diets, most species are opportunistic and will feed on the available food source.

Over the past decade, the vine mealybug (Planococcus ficus) has become an increasing problem for wine, table, and raisin growers.  The paramount issue for winegrape producers is that vine mealybugs transmit a closterovirus that causes grape leafroll disease.  Ants play a critical role in the management of vine mealybug because the species produces a large amount of honeydew and ants aggressively protect them from natural enemies.  Additionally, ant species such as F. aerata and T. immigrans can maintain below-ground colonies of vine mealybug on the vine crown and roots.

Manufacturers of insecticidal ant baits registered for use in agriculture commonly formulate the active ingredient in soybean oil.  The mixture then is applied onto defatted corn grit as a carrier.  Such baits effectively control species that prefer fat/protein, however, not those species that prefer sugars.

In this study we evaluated Altrevin, containing the active ingredient (AI) metaflumizone, and Esteem formulated with the AI, pyriproxyfen.  Metaflumizone acts as a stomach poison and kills foragers, and via food-sharing, inside nest-workers and larvae.  Altrevin can affect a noticeable reduction in foraging activity in as few as three to seven days.  However, the insect growth regulator, pyriproxyfen, affects only larvae and queen egg production and requires six to eight weeks before a noticeable reduction in foraging activity occurs.

To increase the attractiveness of soybean-based baits to a wider range of ant species, the California Department of Pesticide Regulation has approved the addition of food grade material.  University of California researchers have conducted field experiments evaluating if the addition of powder sugar improves bait efficacy against sugar-feeding ants.  However, additional research is needed addressing the question.

The objective of this research was to determine if the addition of powdered sugar to two soybean-based ant baits, Altrevin and Esteem, improves attractiveness and thus efficacy against sugar-feeding ants.  A secondary objective was to evaluate different commercial bait programs.  Because ants will protect vine mealybug and transport it up the vine throughout the warm spring/summer months, season-long ant management is important in managing such a devastating invasive pest.

The experiment was conducted at a commercial winegrape vineyard located at 20630 DeVries Rd. in Lodi, California. The vineyard consisted of approximately 25 acres of 11-year-old Pinot noir vines planted on an east / west direction with 7’ by 9’ spacing.

To reduce cross contamination of treatments, we designated four blocks in the vineyard, each consisting of 20 vine-rows by 80 vines, an area of approximately 2.3 acres (Figure 1).  During early May, we visually inspected the base of vines within the middle two vine-rows of each block for the presence of a fresh mound and ant foraging activity.  Ten locations with foraging activity were selected per block, numbered (1 – 10), and demarcated using fluorescent pink, 4 x 5” stake flags.  All monitoring locations were located near the base of vines and separated by at least 30’ within blocks and 180’ between blocks.

Bait treatments were randomly assigned to only the three blocks on the west half of the vineyard.  We assigned the block on the vineyard’s east side as the control to minimize the risk of contamination from treated blocks (Fig. 1). 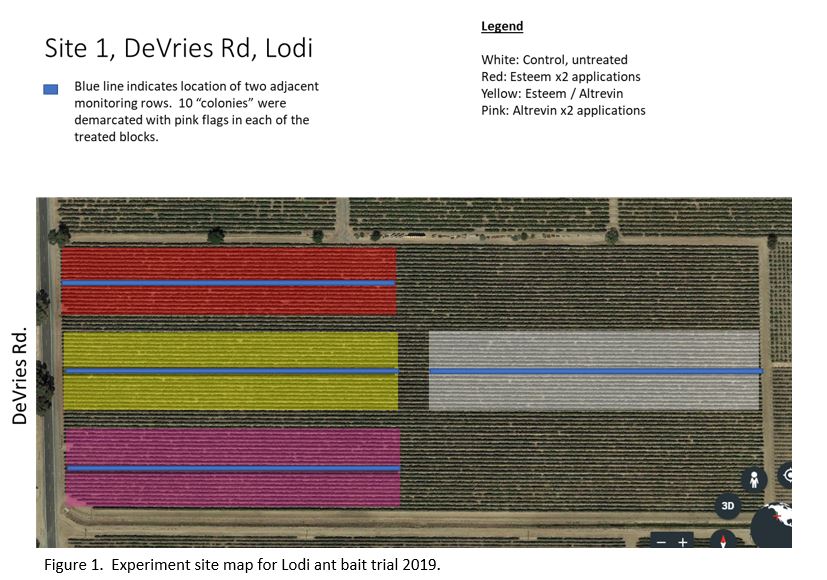 The first application occurred on May 10, 2019, with the second application occurring on July 9, 2019, using a Herd broadcast seeder/spreader (GT-77-ATV) mounted to a Honda 420-Rancher ATV.  The Herd spreader was fitted with a number 2 plate to apply Altrevin and a number 2 plate, modified by Valant USA, to include a second hole.  The ATV drove on every other row at a speed of 13 or 6 mph to apply Altrevin and Esteem respectively.

Pre- and post-treatment monitoring were conducted using 50-dram plastic vials containing a 0.5”-long piece of all beef Kosher hotdog placed at each monitoring location.  On sampling dates, monitoring began at approximately 10:00 am and ended at approximately 12:00 pm.  Vials were retrieved by quickly picking the vial up and capping it to capture ants foraging on the hotdog.  After collecting vials, they were taken to the laboratory located at the Kearney Agriculture Experiment and Extension Center in Parlier and stored in a freezer at 20°F.  Days after treatment (DAT) monitoring occurred weekly or biweekly from May 7 to September 6, 2019.

To statistically analyze the treatment effect, I employed a nonparametric and a general linear model based on SAS statistical software.  Data were (square root + 1) transformed and analyzed for homogeneity of variance using the Bartlett procedure.  If the variances were normally distributed, the data were analyzed using least-squares-means (lsmeans) along with the pdiff option to conduct pair-wise t-test comparisons between treatments.  Non-normal data were analyzed with the nonparametric procedure and the DSCF option to conduct multiple comparisons.

Ant Species Captured.  Pavement ant was the dominate species captured over the duration of the experiment.  Additional captured species included pyramid ant, thief ant, and a Myrmicina species.  A mixture of these species never occurred within the sampling vials.

Bait Treatment Effect.  Due to the low number of sugar-feeding ant species captured during the study, I conducted the analyses using only pavement ant data.  On April 30, 10 days prior to the application of the treatments, foraging activity among the blocks was statistically similar, ranging between 26.7 to 143.1 ants per monitoring vial (Table 1).  Data from four of the 12 post-treatment sample dates did not have normal variance and were analyzed using nonparametric statistics (Table 1). 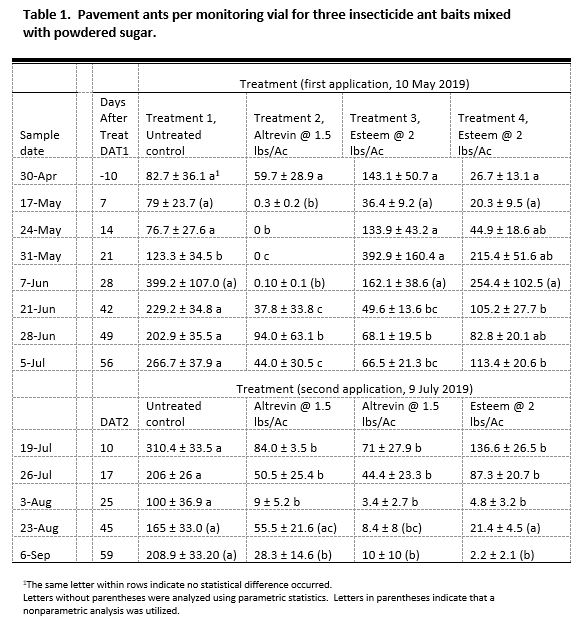 Due to the very low number of sugar-feeding ant species infesting the experimental site, we could not fully address our objective.  The pyramid ant prefers to feed on sugars and in only one monitoring location did we consistently capture this species; therefore, it is not possible to conduct any statistical analyses.  However, the numerical foraging activity data indicate that adding powdered sugar increased bait attractiveness and thus efficacy against the species.

The fact that the vineyard was infested with pavement ant rather than Argentine and moreover that pavement ant was identified from other nearby vineyards is encouraging.  This means that if pavement ant is the predominate species in the Lodi winegrape growing region rather than Argentine ant, there are very effective baits commercially available.  Further research should include an area-wide survey of the Lodi area to determine which ant species occur.  Further research should also be conducted to determine if control of pavement ant with commercial baits will also reduce vine mealybug populations.

Interested in finding out which ant species you have in your vineyard?  Dr. Tollerup has generously volunteered to help Lodi growers identify their vineyard ants!  Stop by the Lodi Winegrape Commission to pick up an ant collection vial or collect ants in a ziploc bag, freeze them, and drop them off with us.  Call 209-367-4727 for more information.

All the treatments performed well, however it may be advantageous for mealybug management to treat with Altrevin early in the season to rapidly reduce foraging activity.  The application of Altrevin during early May, followed by Esteem in approximately six to eight weeks may be a longer year-over-year treatment strategy.  For in-season management, an Esteem application as ant begin to forage, followed by Altrevin close to veraison may be the best program for decreasing vine mealybug transport and protection.  Although more research is required, it has been observed that a significant increase in ant activity occurs as sugar transport increases to the grape clusters during veraison. Such a significant increase in ant activity would best be managed by a fast-acting bait, such as Altrevin.

Additional studies should be conducted to determine the long-term effect of baits on pest ant populations.  Importantly, results of this study provide valuable information showing that adding powdered sugar to soybean-based baits do not decrease their attractiveness i.e. efficacy.