Erratic budbreak and variable shoot emergence was more common this year than most. At one point in some vineyards, early emerging shoots had elongating clusters and 7 or 8 unfolded leaves while late emerging shoots appeared as tiny green leaf tips between bud scales. Later, a wide range in shoot development was evident in clusters. In a few cases, the least developed clusters had only a trace of bloom while the most developed had begun to hang under the weight of pea size berries (fig. 1). Such variability will likely complicate harvest scheduling even though berry maturation converges late in the season. There are several causes of erratic budbreak and variable shoot emergence. We will explore them in this article and we will discuss management actions to avoid or at least minimize them.

This article is a reproduction of the Mid Valley Agricultural Services September 2008 Viticulture Newsletter. 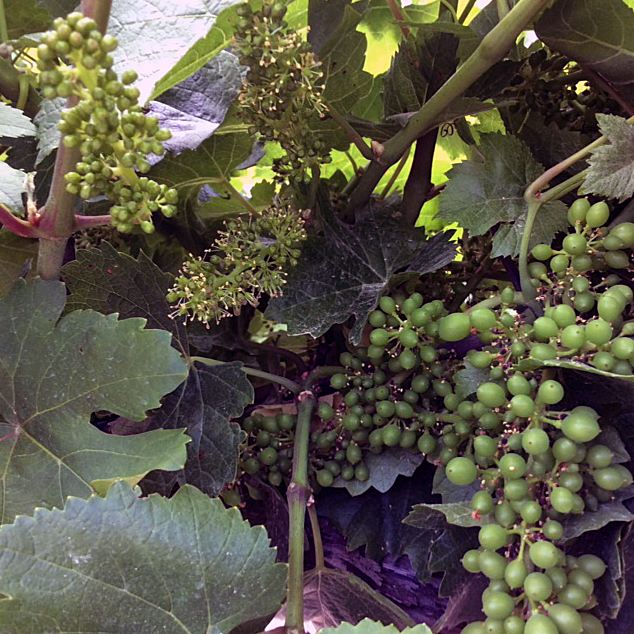 For some vineyards, the stage for erratic budbreak may have been set early in the last growing season. During this time, some primary and sometimes secondary buds may have died if they were excessively shaded or if shoot growth vigor was excessively high. Under such conditions, stems form poorly, with long, flattened internodes composed of relatively soft, poorly nourished tissues, which are high in nitrogen and low in carbohydrates. Damaged buds on them appear light tan to dark brown.

Excessively high shoot growth vigor not only plays a role in early season bud necrosis (BN) as described above, but it also delays the onset of cane ripening that leads to winter hardiness. At the other extreme, too little growth vigor can lead to too few leaves and carbohydrates to ripen both the crop and canes, again compromising cane and bud hardiness. Similarly, anything that limits leaf function or longevity has the potential to negatively impact canes and buds. This includes severe pest damage and water stress resulting in premature leaf fall.

Even healthy, normally formed cane tissues have limits to their cold tolerance. Buds in close proximity to one another may vary in their cold tolerance and survival following a freeze. Further complicating matters, an individual grapevine bud enclosed under a single set of bud scales is actually a compound bud composed of three buds – a primary, secondary, and tertiary bud. They are listed here in order of increasing cold tolerance and likelihood of surviving a freeze. Sometimes cold damages and darkens outer tissues on canes or spurs while nearby buds appear healthy. These buds may later die due to insufficient functional vascular connections. Clearly, cold damage can contribute to budbreak variability (fig 2). 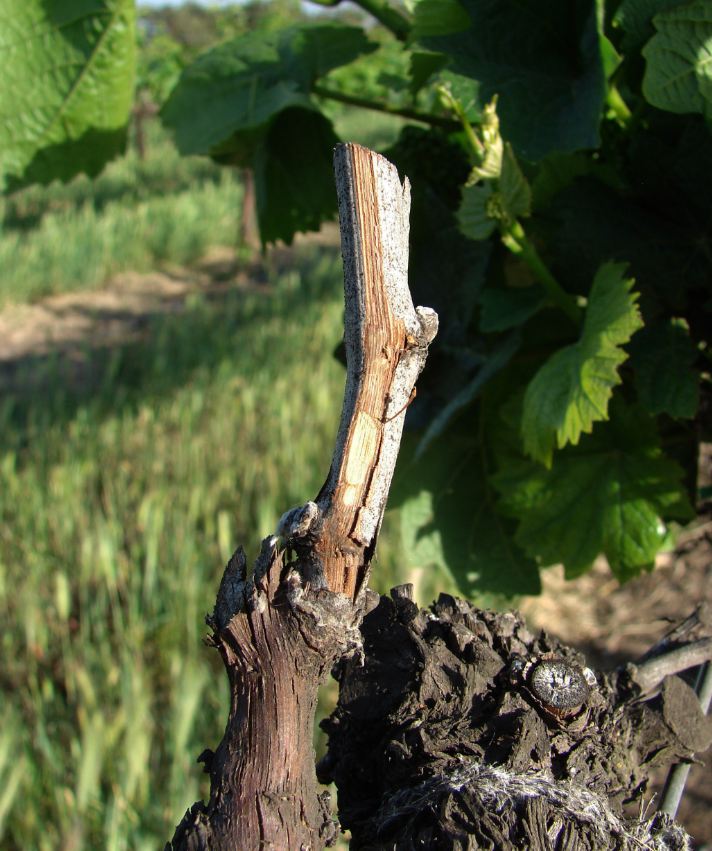 Unusually warm winters may also result in variable budbreak. Too little winter chill (< 200 to 300 hours below 45o F) to induce normal dormancy is the cause and it may extend budbreak over a number of weeks.

Low winter soil temperatures can injure roots. This is significant for budbreak and shoot emergence uniformity for two reasons. First, roots are the primary sources of stored nutrients required for early season shoot growth. Shoots, in fact, draw upon these stored carbohydrates until after bloom. Second, root tips are the sources of hormones (cytokinins) that promote shoot emergence and elongation. The risk of winter root damage is greater for dry than for moist soils because water moderates temperatures. Factors affecting roots during the previous growing season can mimic the inhibitory affects of cold damage with regard to budbreak and shoot emergence. These include overcropping, severe water stress, nutrient deficiencies, and plant parasitic nematode damage.

Young vines have smaller, less extensive root systems than mature vines and they have much smaller trunks and cordons. As a consequence of their relatively small biomass, young vines have a small capacity to store nutrient reserves. In addition, their capacity to synthesize shoot growth stimulating hormones may be limited as a consequence of a limited number of root tips. Young vines also tend to be very fruitful, which makes them prone to overcropping (fig. 3). Due to this combination of factors, young vines are more likely to suffer erratic budbreak and shoot emergence than mature vines.

Cutworms are also agents of erratic budbreak. They feed on swelling buds and recently emerged shoots at night and retire under vine bark or soil during the day. Cutworm infestations are usually localized, requiring spot treatment with Sevin bait or another registered insecticide for control. 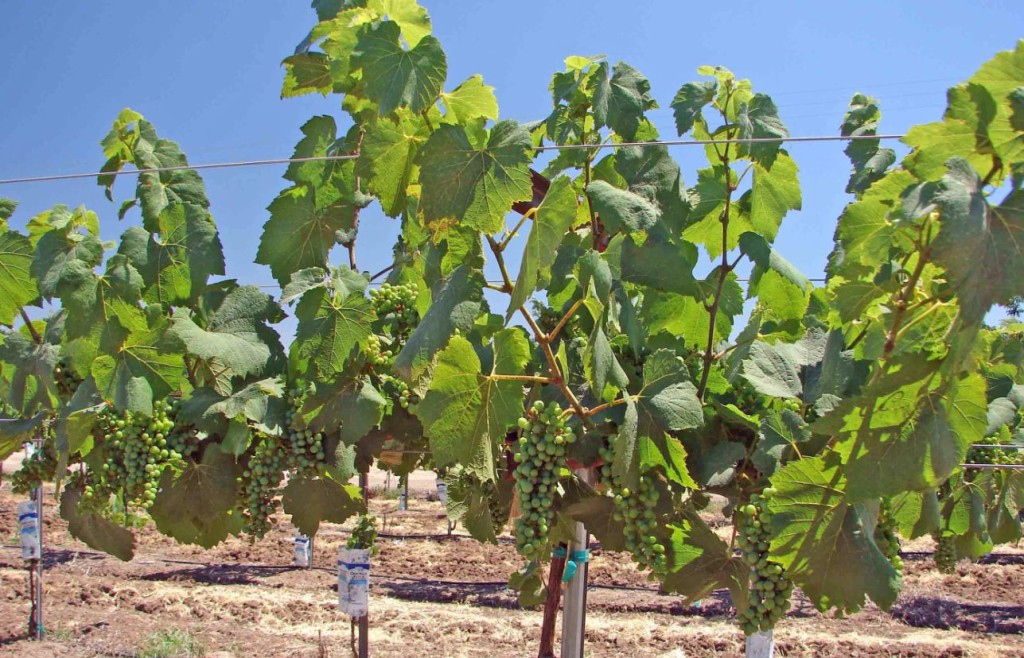 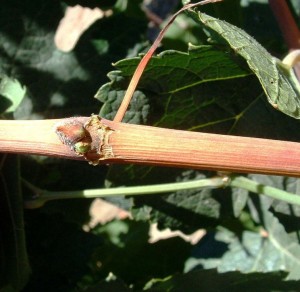 While the causes of variable budbreak and shoot emergence are many and varied, their remedies are fairly straightforward and a normal part of sound viticulture. Basically, apply resources and practices that foster balanced growth of foliage and fruit, promote fruit zone exposure to dappled sunlight, and induce moderate vine water stress soon after fruit set. Between fruit set and ripening, maintain these vine characteristics and healthy leaves. Under these conditions, stems will turn yellow and then woody shortly before or during veraison, indicating of the onset of cold hardiness development (fig. 4). Following harvest, irrigate and fertilize to sustain leaf and root activity, to promote nutrient storage in woody vine tissues, and to ensure vines go dormant with moist soil around a majority of their roots. Throughout the growing season, ensure a balanced supply of mineral nutrients, including calcium, iron, manganese, copper, and boron that are essential to cane ripening and cold hardiness. During dry winters, periodically irrigate to maintain moderate soil moisture in the root zone. To absolutely assure uniform shoot emergence, apply Dormex (hydrogen cyanamide) about 4 weeks prior to budbreak.