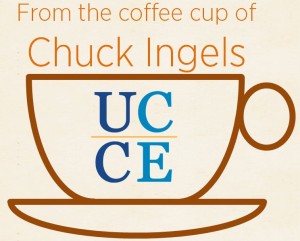 The brown marmorated stink bug (Halyomorpha halys) (BMSB) is native to China, Korea, and Japan. The first documentation of this species in the U.S. occurred in Pennsylvania in 2001. It has been found in dozens of U.S. states either as reproducing populations or single finds, and the list of infested states has grown each year. BMSB was first found in the Western U.S. in Portland in 2004, and has spread through western Oregon and into Washington.

This article was originally published in University of California Agriculture and Natural Resource’s February 2014 Tree and Vine Newsletter. This article and other information including official pest alerts, videos about BMSB identification, and other educational materials can be found HERE 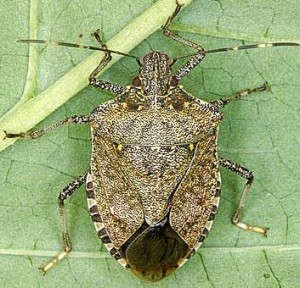 In California, a reproducing population was first found in Pasadena and San Marino (L.A County) in 2006, and it has spread to several cities in that county. In 2013, a large reproducing population was discovered in Sacramento and an infestation was found in Yuba City, and there have now been single finds in many other counties. In Sacramento County, two new finds were discovered in Citrus Heights in October 2013, and in December 2013 one was found hiding between boards stacked outside a home in Elk Grove; these residents all work or frequently visit midtown or downtown Sacramento where BMSB populations are high. Anyone who visited this area in summer or fall 2013 (or earlier) may have inadvertently spread BMSB to other regions.

The number of generations per year depends on seasonal temperatures. In the northern U.S., there is typically one generation per year and 2-3 in southern portions of the mid-Atlantic. In southern states there can be up to 5 generations. For calculating degree-days (DD), the lower threshold is 57°F and upper is 97°F, and 968 DD are needed for total development (egg to adult) plus 139 DD to egg-laying. Generations begin to overlap by late spring. The length of time in each stage varies depending on seasonal temperatures. On aver¬age, they will develop in 33-45 days. The last generation overwinters as adults for about 5 to 7 months, depending on cool-season temperatures.

Host Crops and Other Plants. 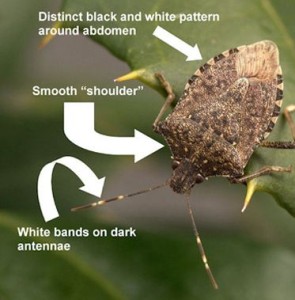 BMSB is a serious pest of many fruit, nut, and fruiting vegetable crops, and it has caused millions of dollars of damage to crops in the mid-Atlantic states. A table of over 170 host species, including those that attract the highest densities, can be found on StopBMSB.org. The hardest hit fruit crops include stone fruits (especially peach), pome fruits, and berries. Early-season feeding causes catfacing, dimples, or depressed areas on the surface of mature fruit and white, pithy areas internally. BMSB will feed on grapes but vineyards are not considered a major host. Row crops hardest hit are soybean, okra, pepper, eggplant, tomato, corn, and sunflower. Major woody ornamental hosts include English holly, catalpa, tree of heaven, princess tree, Southern magnolia, and redbud. The list of host plants will likely grow as the pest spreads to new regions. For example, Chinese pistache was not on the list but all BMSB stages were found on trees in Sacramento in fall 2013.

A key factor in stink bug populations is the availability of host plants and wooded areas. In the mid-Atlantic states, crops are often surrounded by wooded areas, and crop damage is generally worst on the crop edges as BMSB adults migrate in late spring. In that region, adults spend the winter months in dry, dead trees – often in oak and locust trees. The dead wood and peeling bark of these trees give the insects a place to crawl into and hide. In California, crops adjacent to wooded and probably riparian areas could be at greatest risk. 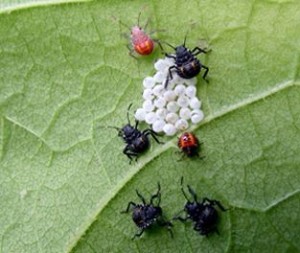 Adult BMSB were tethered to a rotating arm on a machine that can measure flight. The average flight distance in 24 hours was 1.2 miles, with some up to 20 and one at 75 miles. In a similar study at Oregon State University, a few flew 45 miles. Although capable of long-distance flight, in the wild they usually fly short distances. It was found that adults do not fly much when there is a breeze, and they do not fly below 61° F.

There are five stages (instars) of BMSB nymphs. Most stages were found to walk on flat ground about 100 ft. in 1 hr. to baited traps, but third instar nymphs walked 130 ft.5 In a mown field, the peak capture rate of nymphs walking 65 ft. was 7-8 hrs. Wild nymphs were found to readily migrate from tree of heaven woods across a “food desert” to baited traps. Clearly, both adults and nymphs are very capable of dispersing to different hosts.

BMSB in Vineyards and Wine

Grape studies in New Jersey showed that populations were highest on the edges of vineyards adjacent to forests, soybeans or other host plants. White varieties were attacked more than red varieties, and both adults and nymphs caused damage to berries. Two nymphs per cluster were enough to cause serious damage, which included aborted berries, loss of turgor, necrosis, and bunch rot. In the cool morning hours, BMSB were found throughout the vines and in afternoon they sought relief from the heat in clusters. Nymphs were very hard to find in the clusters. A Univ. of Maryland study found that 5-10 nymphs per 25-lb. lug caused a perceptible aroma taint to grape juice but the taint was imperceptible in the wine; the taint smells like fresh cilantro, and has also been described as skunky, citrusy, and piney. But in another study, as little as 1 bug per 3 clusters present during wine processing led to detectable defensive compounds in the wine that were excreted by the bugs, which did affect wine aroma and flavor. BMSB taint decreased during fermentation but was reintroduced during pressing, performed post-fermentation. Higher taint levels occurred for heavier presses.

Articles on BMSB in Winegrapes 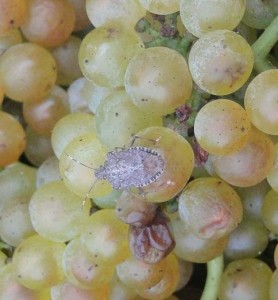 USDA researchers have developed pyramid traps and aggregation lures that are currently sold through AgBio, Inc. (Dead-Inn traps). The traps consist of an inverted clear plastic container with an entry cone opening that is attached to a pyramid-shaped, corrugated plastic stand. The “Grower” trap type stands 4 ft. tall. Stink bug traps are also sold by Rescue.

USDA researchers have also found the greatest trap capture using two lures together – a BMSB aggregation pheromone lure (100 mg) and a lure containing the synergist methyl decatrienoate (MDT, 66 mg) lure. In addition, increasing amounts of both pheromone and MDT have been shown to catch greater numbers of BMSB.

The “Grower” pyramid trap and stand costs about $30 each, and two 30-day lures containing different scents are used in each trap; the cost for each lure is about $4-$5. Some people have made their own stink bug traps, and some prefer tree-hung traps to reduce impacts on orchard operations. An insecticide-laced strip (Hercon Vaportape II) is often included in the trap to kill trapped bugs and prevent escape.

The use of traps for monitoring BMSB is considered relatively ineffective when populations are low, and generally in late spring. Ten traps placed in October 2013 in areas of Sacramento County beyond midtown and downtown caught none, including in the yards of two homes where adults were found on or in homes in Citrus Heights. The lack of catches was likely due to late trap placement, inefficiency of trapping, or a combination of both. Traps in midtown Sacramento in September caught dozens per week.

Other monitoring methods, likely more important than trapping or used together, include beat tray sampling and timed searches of foliage (e.g., 1.5 or 3 min. per location) on crops, especially field edges bordering riparian areas or susceptible crops, and/or on susceptible ornamental species. Himalayan blackberry stands are common non-crop host sites, but BMSB can be hard to find on them.

BMSB is a new pest so insecticides will play a key role in management, at least until reduced-risk methods are developed. Mid-Atlantic peach growers make 10-12 weekly insecticide applications, mostly alternate-row treatments, from late May through harvest using pyrethroids and neonicotinoids. Some insecticides have been found to have greater efficacy at different times of the season.

In a landmark study examining the efficacy of 37 insecticides, BMSB adults were exposed to 18-hour-old insecticide residue on glass petri plates for 4.5 hours. The following insecticides, in descending order, had the highest “lethality index” (>75 on a 0-100 scale) over a 7-day period, based mostly on high immediate mortality with very little recovery: dimethoate, malathion, bifenthrin, methidathion, endosulfan, methomyl, chlorpyrifos, acephate, fenpropathrin, and permethrin.

A field insecticide study was conducted in apple and peach blocks in West Virginia. Feeding injury was almost nonexistent for at least 7 days after expo¬sure to fenpropathrin and dinotefuran. Although these materials did not result in high mortality, they had an anti-feeding effect. Endosulfan, methomyl, thiamethoxam, and bifenthrin had high mortality on BMSB adults exposed on the day of application. Other insecticides caused moderate mortality or mixed results, including Lambda-cyhalothrin and malathion. Greater mortality was generally observed earlier in the season (June and July) than later, likely because these overwintering adults are weaker and older than new generations emerging later. Mortality rates were lower after 3 or 7 days as the insecticides aged in the field, possibly due to degradation from UV light. Insecticides that had 100% mortality (immediately after application) had only about 60% average mortality in the field in late June/early July, and it declined to 40% and 20% with applications in August and September, respectively. This project supported the typical practice of applying insecticides in alternate rows every 7 days rather than complete applications every 14 days. The authors did note the negative effects of using broad spectrum pyrethroids on predaceous mites and other natural enemies, and the potential impacts of using neonicotinoids on pollinators.

Organic insecticides that have at least some efficacy against BMSB include pyrethrum, azadirachtin, spinosad, sabadilla, insecticidal soap, and combinations of some of them. Organic products generally work better on nymphs and have much less effect on adults. A lab study showed that pyrethrum + spinosad applied to apple fruit resulted in 36% mortality of BMSB adults after 10 days. A field trial in Maryland showed that untreated peppers had 90% damage and the best control (60% suppression) was achieved with sabadilla; several other products provided less suppression.

Researchers at Rutgers Univ. developed a crop perimeter restructuring (CPR) program in peaches that combines border-only insecticide applications with traditional IPM tactics (“IPM-CPR”). The strategy resulted in no significant difference in cat¬facing damage overall compared to standard whole-orchard applications, it resulted in better control along the crop perimeter, and it led to increased biocontrol in the orchard interior. The practice can reduce insecticide input by up to 75%.

The potential for attract-and-kill management looks promising and is only beginning to be explored. Retention of BMSB on apple trees with lures was found to be much greater than around traps with lures. Lures were placed in apple trees and trees were sprayed with insecticide after 48 hrs.; over 52,000 BMSB were killed. There was a strong pheromone lure dose response.

In North Coast pear orchards, the use of mass trapping on orchard perimeters and contact herbicide treatments in row middles appeared to result in lower resident consperse stink bugs in the orchard interior.

Once introduced to an area, BMSB can take years to build up enough population to destroy an entire crop. East Coast researchers say it may take up to 8-10 years, but in the Central Valley there may be more generations, potentially reducing the time of buildup. Small outbreaks will likely catch some growers off-guard – especially in crops near highway rest stops, mini-storage facilities, and homes and businesses of those who visit infested areas such as Sacramento, Los Angeles County, and the Mid-Atlantic states. In all likelihood, the pest has already been introduced onto or near some farms. It is crucial to train management and farmworkers how to identify BMSB so outbreaks can be kept to a minimum, and to have a plan for managing this pest. View the BMSB Pest Alert and the BSMB identification video at www.ucipm.ucdavis.edu to learn how to identify the pest.