For years I have attended educational meetings in which the vine mealybug (Planococcus ficus) was portrayed as some kind of super-pest. I was told why it was so much worse than the grape mealybug and also why biological control would not work on it. In fact, I was told this as recently as last month by an entomologist with a Ph.D. from U.C. Berkeley.

I believed it, more or less. I had a few doubts because almost every species of mealybug on almost every permanent crop almost everywhere in the world can be managed with biological control. The vine mealybug’s closest relative, the citrus mealybug, is controlled biologically in California citrus groves with the very same parasite that attacks the vine mealybug in vineyards.

In case there is any confusion, when I say “biological control” I am referring to the control of pests by other organisms as opposed to any type of spray or pheromone.

When I first began controlling the vine mealybug I relied primarily on neonicitinoid insecticides applied through drip irrigation. Then, when Movento became available, I switched to that insecticide because the mealybugs appeared to be developing some resistance to the neonicitinoids. At no time did I recommend exclusive reliance on biological control. 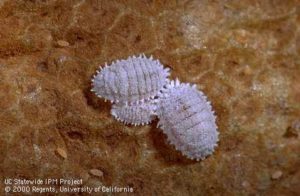 However, for a variety of reasons I had two growers in 2016 who did not apply any insecticide to control mealybugs in vineyards with very sizeable populations of vine mealybug. In one of the vineyards I fully expected the grower to lose his crop. In each vineyard it was easy to find wet trunks with vine mealybug colonies under the bark.

To my surprise, as the vine mealybugs moved off of the trunk and on to the fruit and leaves they were heavily parasitized by a small wasp named Anagryus pseudococci. In one vineyard in Acampo it was unusual to find more than one or two mealybug nymphs on a leaf rather than an entire colony. It was also unusual in that vineyard to find fruit clusters with any mealybugs or sooty mold at all.

I couldn’t believe what I was seeing and wanted to have someone else look at these vineyards to make sure that I wasn’t crazy. I contacted University of California biological control specialist Kent Daane to look at both vineyards and he made a trip to Lodi in September, 2016 to do just that. I also invited Stephanie Bolton, the new grower programs coordinator at the Lodi Winegrape Commission, to join us. I wanted witnesses!

Shortly after entering the Acampo vineyard Kent observed that it had the highest level of parasitization of vine mealybugs that he had ever seen. He said that virtually every vine mealybug he found was parasitized. He also noted that the parasite was even attacking very young, small mealybug nymphs that are usually too small to be parasitized. He then collected samples for DNA analysis to compare them with other strains of the Anagyrus parasite that he and other U.C. biocontrol specialists had introduced into California from other countries.

The second vineyard that we visited that morning was in Clarksburg. In that vineyard the Anagyrus strain was not attacking the very young, small nymphs like in Acampo but rather was parasitizing mid-sized nymphs. Kent also collected parasite samples from this second vineyard for DNA analysis.

A couple of months later I was sharing these observations with a group of pest control advisors in Tulare. Joe Barcinas, the proprietor of the Foothill Agricultural Research insectary in Corona, was there and he asked if he could come to Lodi and collect some parasites from the first vineyard to rear in his insectary.

In mid-December Joe made his first-ever visit to Lodi and collected the strain of Anagyrus parasite that was successfully parasitizing the small, young vine mealybug nymphs. Once again I invited Stephanie to join us to familiarize herself with the insectary-rearing process. Joe then took the parasites back to Corona to begin rearing them for sale to grape growers who are interested in using biological control.

Rather, I am recommending Integrated Pest Management of the vine mealybug. We have all heard the term IPM for so many years that with overuse we may have forgotten what it really means. The “integrated” part of the term refers to the integration of several different control methods in unison to achieve management of a pest. In this case pesticides can be used, but the grower should be mindful to only use pesticides that will not affect the parasites that are also attacking the vine mealybug. We are therefore “integrating” biological and chemical control.

One advantage of combining control methods is that if a few mealybugs develop resistance to the pesticide there are still biocontrol agents in the vineyard that can control them. This combination slows the development of resistance by the pest to the pesticide.

Stephanie Bolton has started a new workgroup at the Lodi Winegrape Commission for growers who are interested in exploring this topic. She can be contacted at (209) 367-4727 or stephanie@lodiwine.com.

Larry Whitted is an independent pest control adviser with experiencing managing mealybugs throughout California, Egypt, Chile and Argentina. He can be reached at (209) 327-6472 or Lrwhitted@aol.com.