Mourvèdre, like Tempranillo, is thought to have first been planted in Spain by the Phoenicians as early as 500 BC; and established in vineyards throughout Southern France – particularly in Bandol, where it is the major red winegrape, as well as Southern Rhône Valley’s Châteauneuf-du-Pape appellations – during and after the Roman Empire.

In Spain, the grape is known as both Mataró (named after the town of Mataró, located just outside Barcelona) and Monastrell (particularly in Jumilla); although the name Mourvèdre is presumed to be derived from the name of the Spanish town of Murviedro, near Valencia, where the grape is also extensively planted.

Historically, the grape has been known primarily as Mataró in both California and South Australia. Its French moniker, Mourvèdre, began to catch on in California after the early “Rhône Ranger” movement in the late 1980s. 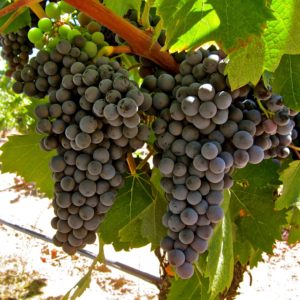 While late to bud out and ripen, Mourvèdre is a quintessential Mediterranean Climate grape, and excels in drier, windier terroirs where its compact clusters are less prone to mildews – as evidenced by its success in coastal regions like Bandol in France and California’s Contra Costa County (in the latter case, where small stands of own-rooted ancient Mataró have thrived in Delhi series sandy soils since the 1880s).

Besides the fact that its deep color, sturdy tannin and meaty texturing and flavor make it an ideal blending grape – particularly in the “GSM” (Grenache + Syrah + Mourvèdre) reds of South Australia, as well as its classic partnership with Grenache, Syrah and Carignan throughout Southern France – Mourvèdre has also been favored for centuries throughout the Mediterranean (as well as in Australia and California) because its vertical growth (canes pulling upright) makes it ideal for head-trained/spur-pruned viticulture (or what the Australians call “bush” vines).

Mourvèdre experienced a significant surge in plantings in France after 1941, when the Bandol appellation was established around the fishing village in Provence of that name. In Bandol, both reds and rosés are required to be at least 50% Mourvèdre, although in reality the blends are closer to 70% to 90% (usually with Cinsaut, and occasionally Carignan or Syrah, filling out the balance). Grown in gravelly red clay with limestone and silicon, the long-lived and highly food-versatile red wines of Bandol have come to personify Mourvèdre, inspiring vintners and wine lovers enthralled by the grape all around the world.