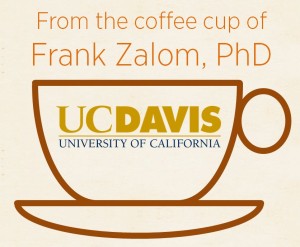 Spider mites are found in vineyards throughout most grape growing areas of the world. In California, the primary spider mite pests are the Pacific spider mite, Tetranychus pacificus, and the Willamette spider mite, Eoteranychus willamettei (Karban and Zalom, 1998). The Pacific mite can be a major problem in warmer grape-growing areas and in hot and dry years. Although it can cause damage early in the season, Pacific mites generally prefer the hotter, dryer parts of the season. The Willamette mite is often considered an early-season mite. It prefers the cooler parts of the plant and is primarily a problem in the Northern San Joaquin Valley, the Sierra foothills and in coastal valleys, although it is known to be problematic in other parts of the San Joaquin Valley during certain years. Populations can persist throughout the growing season.

This article was written by Frank Zalom, Francisco Javier Saenz de Cabezon, and Corin Pease of the Department of Entomology, University of California, Davis. The original report can be assessed by clicking HERE.

Conventional acaricides available for control of spider mites were limited to products such as Kelthane, Omite and Vendex for many years. Spider mite resistance to these compounds became problematic in some regions, as did much longer preharvest intervals. During the past decade, a number of new acaricides with different modes of action were developed by chemical manufacturers, and a number of these have become registered on grapes. In 2006, as one objective of grants we received from the American Vineyard Foundation, the California Competitive Grant Program for Research in Viticulture and Enology, and the Viticultural Consortium West, we were able to evaluate many of these new products as well as OMRI-approved products that can be used in certified organic vineyards. 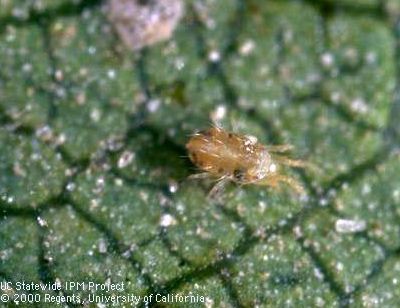 This experiment was also conducted on a cabernet sauvignon grape vineyard near Lodi. Applications were made with an Echo gas powered mister/duster air assist sprayer at a 150 gallon per acre volume equivalent. The application date was August 19, 2006. Treatments and rates (product per acre) applied were Organic JMS Stylet Oil (paraffinic oil) at both 2% and 1% v/v; Ecotrol plus Natural Wet (rosemary oil plus saponin) at 0.75 qts. plus 0.125% v/v; M-pede (potassium salts of fatty acids) at 2% v/v; and GC-Mite plus Natural Wet (cottonseed, clove and garlic oil plus saponin) at 1% v/v plus 0.125% v/v.

There were 4 replicates for each experimental treatment and untreated control in both of the experiments. Each treatment replicate was 5 vines in size, with 2 untreated buffer vines between each replicate. Treatments within an experiment were arranged in a completely randomized design. Mite densities were sampled from the center 3 vines of each plot. On each sampling date, five leaf samples (4th expanded leaf from shoot terminal) were collected from each plot, placed into plastic zip-lock bags labeled to identify treatment and replicate number, and kept in cold chests until they were returned to the Zalom lab at UC Davis for counting. The leaves were mite-brushed onto oil-coated glass plates, and the number of motile spider mites and predator mites determined. For the organic treatments, ten leaf samples were taken on the last 2 sampling dates. Data were analyzed using ANOVA, and treatment means compared by LSD. 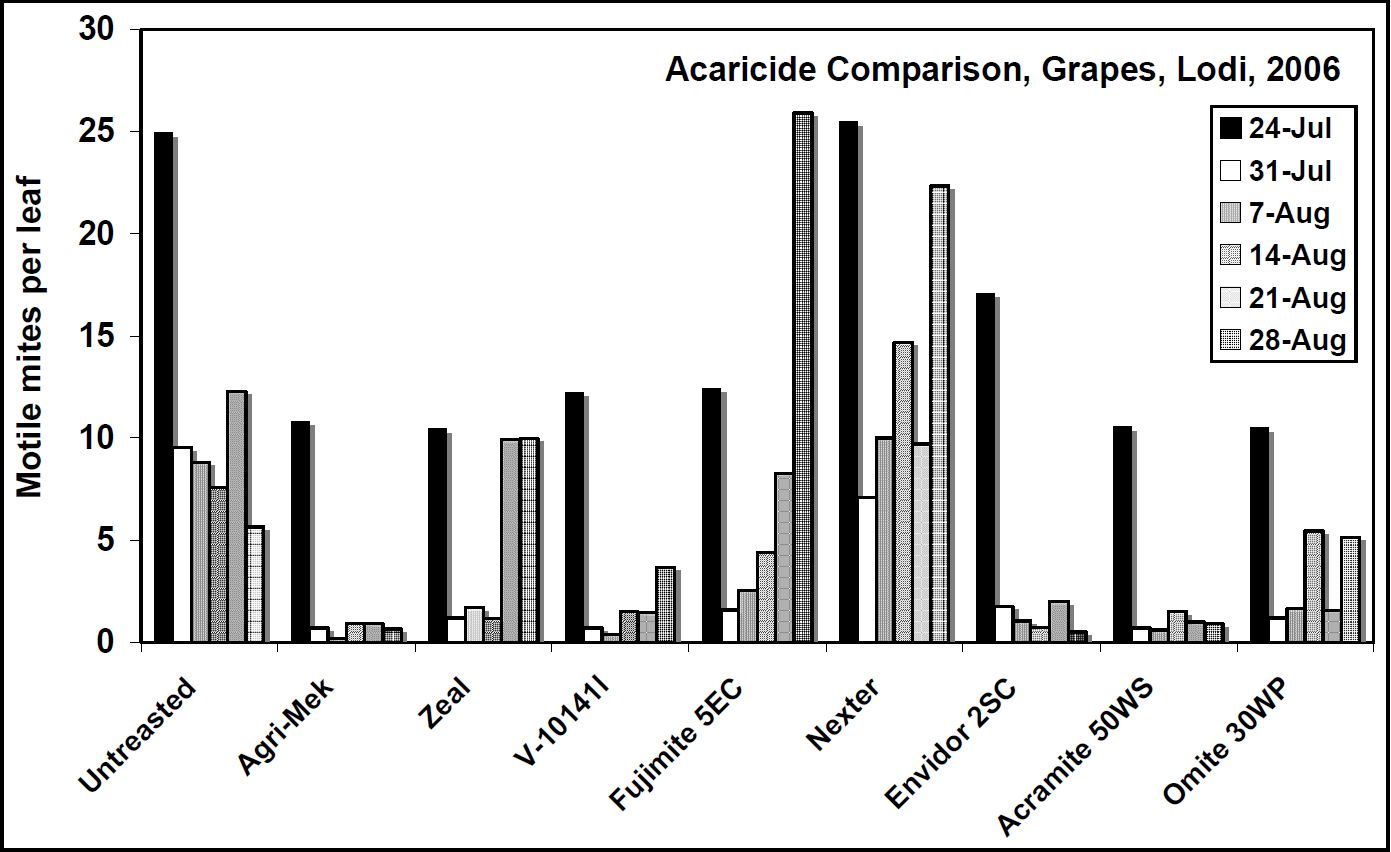 In the conventional acaricide experiment, the spider mite species present was predominantly Willamette mites initially. Following a period of extremely high temperatures soon after the applications were applied, there was a shift to a preponderance of Pacific mites. Results are presented on Figure one. Beginning with the second post treatment sampling date, significant treatment differences (P<0.05) 109 were found. All acaricides significantly reduced the spider mites on the second sampling period, but Nexter did not provide control at the same level as did the others. These results were repeated for the third and fourth sampling periods. By the fifth sampling period, analysis revealed additional treatment differences. On the sixth (and last) sampling date (5.5 weeks after treatment), Agri-mek, the Zeal and Danitol combination, Envidor, Acramite and Omite continued to have significantly lower spider mite densities than did the untreated control or the other acaricides tested. 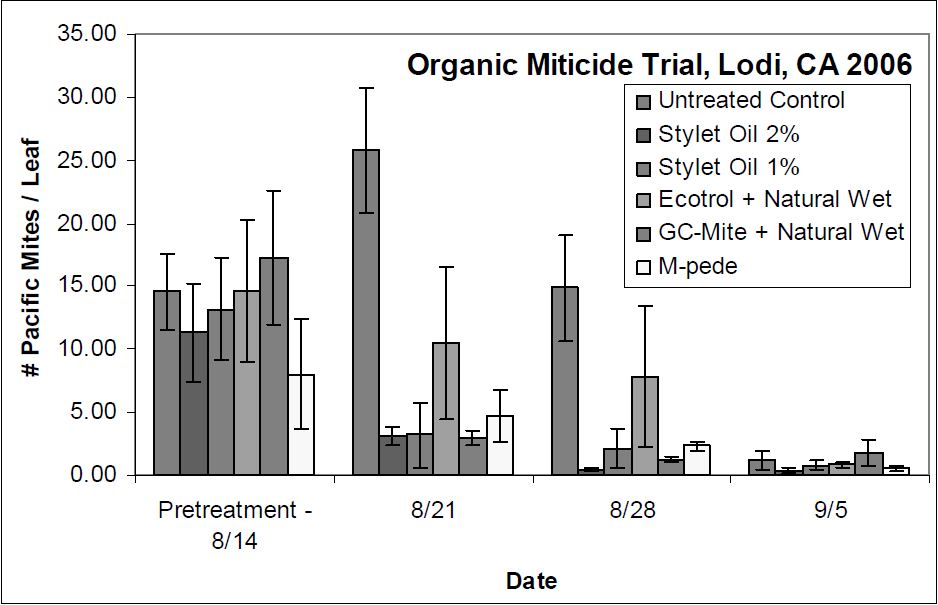 In the organic acaricide experiment, the spider mite species present was predominantly Pacific mite. Mite densities were significantly different (P<0.05) from the untreated control on the first sampling date following treatment. Mite densities began to decrease on the second sampling date, however all treatments except for Ecotrol EC, had significantly (P<0.05) fewer mites present than did the untreated control. The mite densities fell dramatically by the third post-treatment sample, and no significant differences were detected between the control and acaricide treatments. Grapes were evaluated at harvest on September 11 to observe the degree of damage to the bloom on the berries. Stylet Oil at 2% and GC-Mite exhibited substantial damage to the berry bloom, while Stylet Oil at 1% showed only minor spotting. Ecotrol EC, M-pede and the untreated control showed no damage