The Lodi Winegrape Commission and the University of California Cooperative Extension (UCCE) have a long history of working together to achieve our common goal of communicating research insights about best management practices to Lodi growers. In light of this, the Commission partnered with UCCE to provide Lodi winegrowers with the most up to date grape pest management information. During 2014 and 2015 the Commission hosted a series educational meetings that were based around the UC publication Grape Pest Management. In this Coffee Shop article I’ll give a review of the Grape Pest Management meeting series (GPM) and a measure of how successful the effort was at elevating growers’ knowledge about pest management. The conclusion of this series marks yet another successful partnership between the Commission and UCCE. 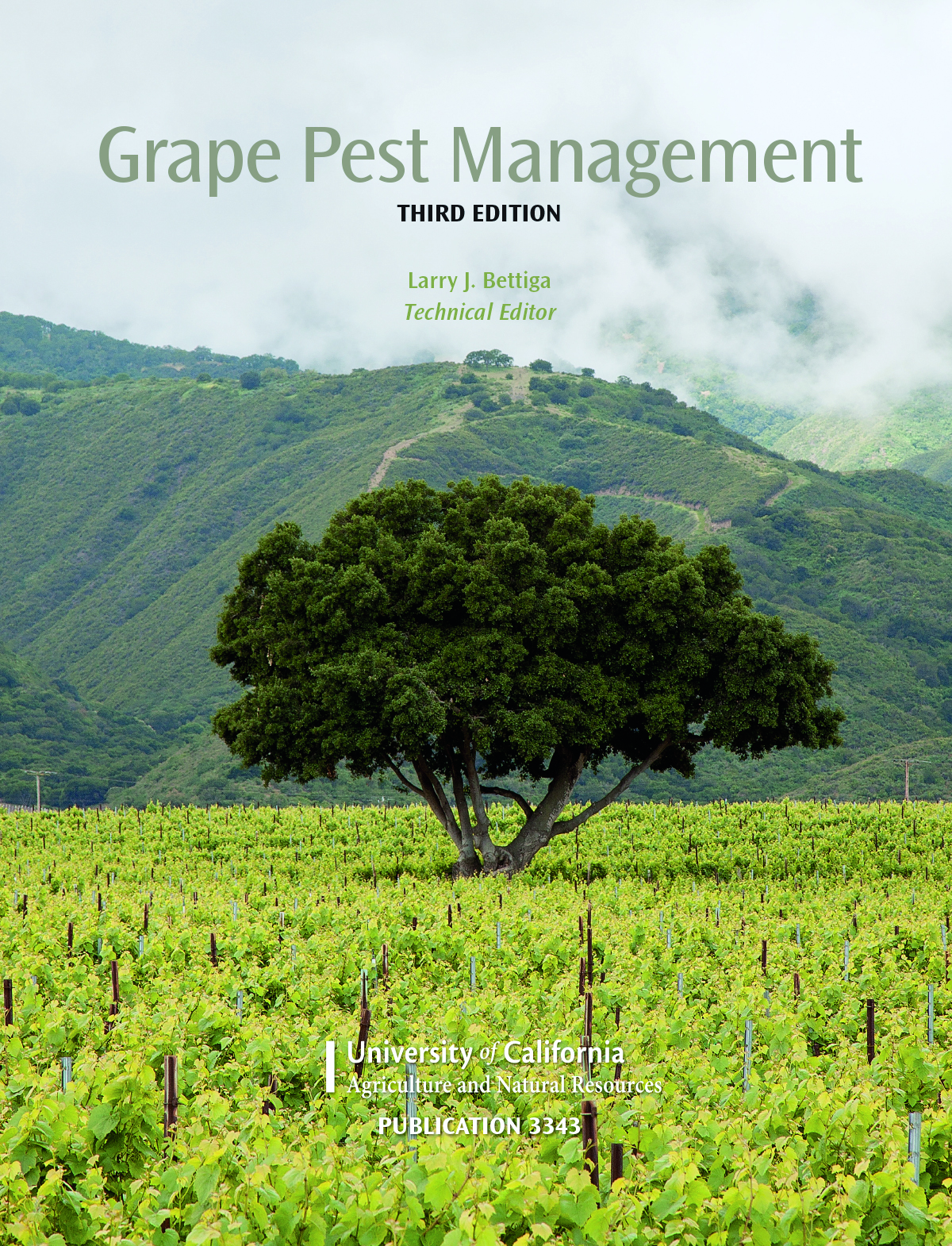 The goal of GPM was to get Grape Pest Management book into the hands of Lodi growers and to provide an opportunity to shape their grape pest management know-how. Authors of selected chapters were invited to Lodi to speak about their specific area of pest management expertise. In total, 16 different authors spoke in Lodi over the course of 9 meetings. This gave growers a chance to hear from and post questions directly to the authors themselves. Growers (who made and other professionals who assist on pest management decisions such as especially PCAs, received a copy of Grape Pest Management book compliments of the Commission. As of August, 2015, total of 165 books have been distributed. So far, four experts of the book have been also posted in the Coffee Shop viticulture research and practice blog and many pest management facts taken from the book were shared using social media. A complete calendar of meetings and coffee shop articles is below. This approach sough to maximize grower exposure to this exceptional text by layering different communication approaches onto each other.

At the conclusion of each GPM meeting attendees completed a short evaluation form. The results, which are presented below, are an indication of how well the Commission is fulfilling its mission of  serving the common interests of Crush District 11 growers through promotion, research, and education. The evaluation included nine questions about the usefulness and relevance of information presented during the meeting, whether they gained any new pest management insights, and whether they expect to change their farming practices as a result. A total of 310 evaluations were collected.

About the Grape Pest Management Book

Grape Pest Management, all 609 pages, is one of the most referenced, best written, and scientifically vetted grape growing texts available to Lodi growers. The original Grape Pest Management was published back in 1981. In 2014, after years of work by over 70 scientists and UCCE specialists and advisors, the third edition was made available by University of California Agriculture and Natural Resources. You will even find chapters authored by our local farm visor Paul Verdegaal. The third edition has been updated to include new grape pests, diagnostic techniques for identifying vineyard problems, high-quality images and illustrations, detailed descriptions of diseases, comprehensive listings of insects and mites, regionally specific pest management calendars, and effective strategies for vineyard floor and weed management.

Lodi’s Grape Pest Management meeting series was exceptionally well-attended, with an average of # growers, pest control advisers, and others attending each of the 9 meetings held during 2014 and 2015. 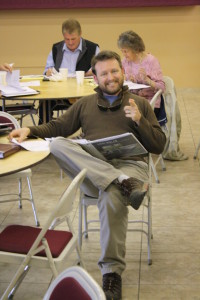 The enthusiastic face of Chris Storm (Vino Farms), frequent attendee of GPM meetings, chair of the Lodi Rules committee and co-author of the Lodi Winegrowers’ Workbook.

Who attended the GPM series?

Lodi winegrape growers are the Commission’s constituents. As such, our educational programs are tailored to benefit this audience. Growers (defined as those who own and operate their own vineyard) made up the largest proportion (50%) of the audience. Outside of learning for themselves, growers benefit when those they rely on for  pest control advice and for help farming their also make an effort to learn more about the topic. Pest control advisers (PCAs) and in-house vineyard managers together made up 20% of the audience. Others who attended the series included winery grower representatives (8%), for-hire/custom vineyard managers (6%), property owners (5%), viticulture consultants (3%), and vineyard supplier sales representatives (1%). Seven percent of attendees represented other jobs.

The GPM series fulfilled its intended purpose and was successful at growing local knowledge about grape pest management. As a result of attending GPM meetings, Lodi growers, PCAs, and others in the local advice sharing network are now better equipped to make informed pest management decisions. 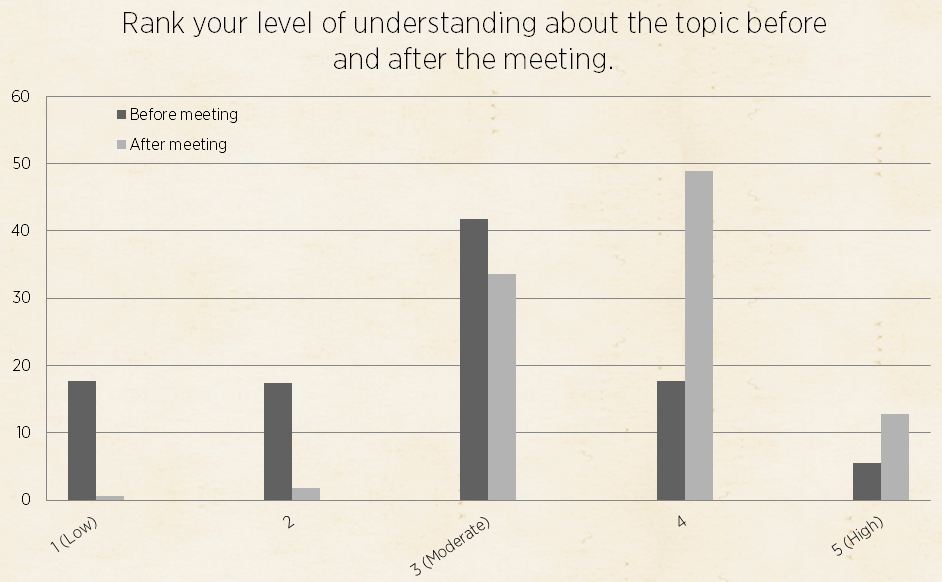 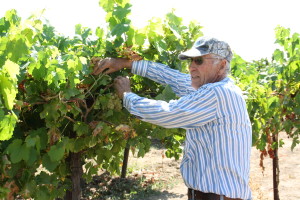 John Lasco pulls back the canopy of the twenty or so table grape vines he has planted along his driveway. When John first moved to Lodi in 1980 he was impressed with the countless fresh eating grape varieties on display in a garden at the old Guild Winery. Coming from South Dakota he had no idea that such a diversity of grapes even existed. Delighted with the different flavors, colors, and shapes, John wanted something similar in his backyard. He never misses an opportunity to entertain guests with his collection.

John Lasco, who farms about 230 acres near Lockford, was one of the most familiar faces at GPM meetings. In fact, he probably deserves a best attendance award for Commission educational meetings in general. If you have not met John, introduce yourself at the next Commission meeting. He never turns down a hello and he will always brighten your day with his positive outlook. If you are looking for a way to strike a conversation with John, I can tell you that he likes talking about “those damn house finches that eat all my grapes.”

John considers himself a “new” grower and said he has been farming winegrapes for “only” 35 years. In a profession that is good at braging about generations of experience I can see why he might still feel like a newcomer. He got his start with cattle and annual crops in South Dakota where he grew up. He found himself in California after taking an elementary school teaching job in Sacramento. Dolly, his wife, was raised in Lodi on her family farm. John eventually switched careers and took over management.

I asked John why he is such a dedicated attendee GPM meetings. Jokingly, he told me that I went through so much work to organize them that he feel obligated to attend. “I wouldn’t want you to get depressed when no one showed up”, he said through his trademark grin. The truth is that John approaches farming with an open mind. Maybe it’s his humility, coupled with his optimism, that drives him to think there is always room for improvement. “There is always something you can learn. There is always something I can do better. Every bit of new info I can find makes a difference.” The GPM series was all about providing growers with an opportunity to learn.

The GPM series gave John confidence in his pest management practices. “It’s not just the new information I get from the meetings, sometimes it’s just nice to learn that what I’m already doing is the right way.” This was the case with leaf pulling. During the bunch rot meeting in August, Doug Gubler drove home the  importance of pulling leaves to increase air circulation, reduce relative humidity, and increase light penetration. John sends a leaf pulling crew through his vineyards every year, but confessed that some years he wonders whether the cost is warranted or of he can get away with doing a bit less. The GPM meeting focusing on bunch rot gave John the reminder that leaf pulling is a critical practice with big benefits when it comes to fungus control and winegrape quality.

John’s complementary Grape Pest Management book is not collecting dust on a shelf. He told me that studying the text has given him a better handle on the differences between Willamette and Pacific Spider Mites. John used the book to learn more about how to identify each spider mite, where in the canopy the two species prefer to inhabit, and the different growing season times where control is optimal (See chapter 79 (page 405) of Grape Pest Management.)

Did the GPM series provide information that was useful, relevant and timely? Yes!

Your pest management needs change with the season and the year. When scheduling GPM meetings we took care to focus on Grape Pest Management chapters that were seasonally appropriate. For example, summer bunch rot, or sour rot, is typically anticipated to be a problem in the months of July through October (see page 23 in Grape Pest Management for a calendar of vineyard activities). Knowing this, the bunch rot meeting was held in late August (see table above). We also made an effort to choose chapters that address pressing pest management concerns facing the local industry. A good example is red blotch, a vineyard virus that growers are eager to learn more about. 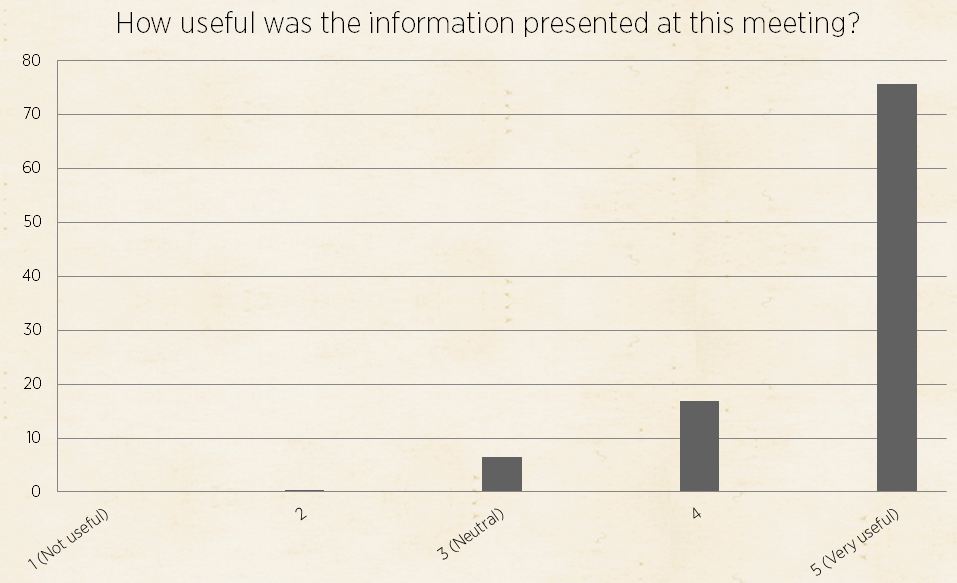 Will Lodi growers change the way they manage pests as a result of the GPM series? It is likely!

The ultimate measure of success for any education program is whether growers take home ideas, techniques, or advise that leads to changes and improvements the way they farming. It would be very difficult to measure whether growers actually do change the way they manage pests as a result of the GPM series. The closest we could get was to ask whether growers intend to change their practices. This is exactly what we did, and the results are positive.

We asked growers to indicate the likelihood that they will change their pest management practices as a result of information presented at the meeting on a five-point scale ranging from “highly unlikely” to “highly likely.” Close to a majority (48%) stated they they were “likely” to change their practices. Seventeen percent reported that they were “highly likely” to do so and less than 0.5% reported “highly unlikely.” 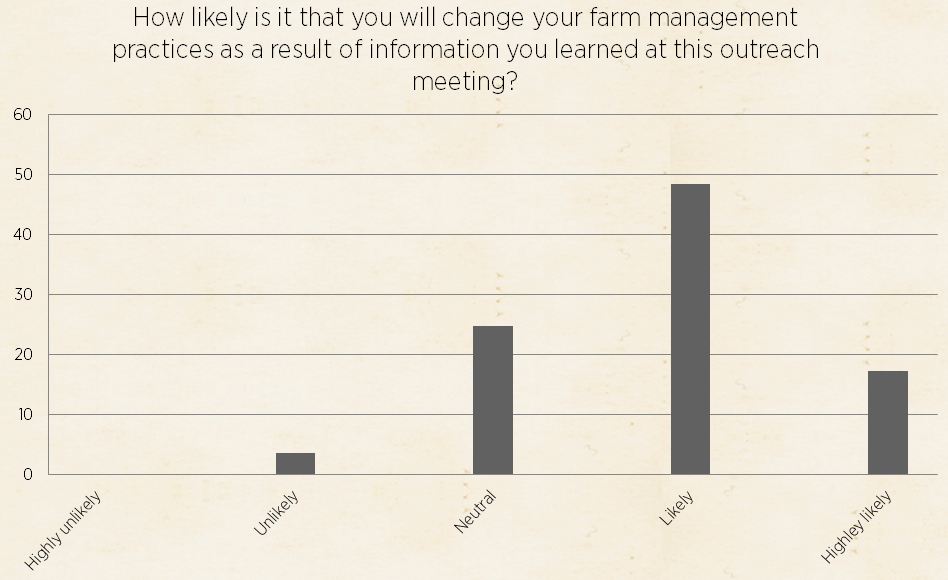