Every year in Lodi there are a few vineyards that have a late-season infestation of spider mites, especially the Pacific spider mite. By late-season I mean late August or September. Typically the grower’s attention during that time period is shifting to harvest and there is the question of whether or not the mite infestation needs to be treated.

One might think that the mite population will continue to increase throughout the fall months if action isn’t taken, but that is generally not the case. At some point in time the mites will go into a resting state known as “diapause” and the population will not increase.

There is some disagreement and uncertainty regarding what is the cue that triggers diapause in the Pacific spider mite. Some people believe that it is triggered by day length while others favor temperature as the key factor. I personally believe that diapause is triggered by the nutritional status of the leaves that the mites are feeding on, but in practical terms it really doesn’t matter.

According to UC IPM Online… 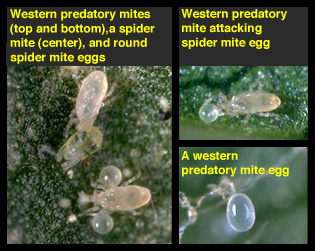 Description: Like other mites, western predatory mites do not have antennae, segmented bodies, or wings. They pass through an egg stage, a six-legged larval stage and 2 eight-legged immature nymphal stages before becoming adults.

In order to look for mite eggs on grape leaves you are going to need a high-quality hand lens. I buy mine from Forestry Suppliers. Specifically, I use the Bausch & Lomb® Hastings Triplet Pocket Magnifier with a 14x magnification.

If I am right and diapause is triggered by the nutritional status of the leaves then pay special attention to vineyards that have lots of fresh young leaves in the fall such as non-bearing young vineyards. These vineyards may continue to have mites laying eggs even after egg laying has stopped in mature vineyards.

According to UC IPM Online… 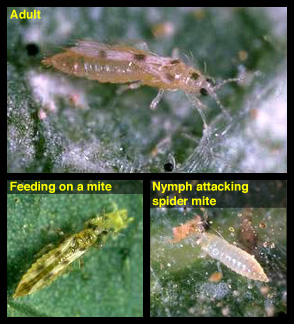 Description: Thrips are tiny, 2-3 mm (less than 1/8 inch) in length, slender insects with long fringes on the margins of their wings. Thrips undergo incomplete metamorphosis, have multiple generations per year, and can be phytophagous or predaceous. Sixspotted thrips adults can be distinguished from other species by the three dark spots on each wing cover of the mostly pale-yellow adult. Nymphs are translucent white to yellow and difficult to discern from other thrips species. Adults and larvae are entirely predaceous, feeding most commonly on mites such as the European red mite, cyclamen mite, and Tetranychus spp. spider mites. Sixspotted thrips can rapidly reduce high mite populations, but often don’t become numerous until after mites have become abundant and damaging.

Life cycle: Most mites, such as this Phytoseiulus persimilis, hatch from eggs and develop through three immature stages before becoming an adult. The adult female lays a light-orangish egg near prey that darkens before hatching. A six-legged mite larva emerges and in many predaceous species is relatively inactive, apparently not feeding before molting to the nymph stage. The eight-legged protonymph, deutonymph, and adult are active searchers and begin feeding almost immediately after molting.