JULY VERAISON AND THE ULTIMATE BEAUTY OF OLD TO ANCIENT VINES 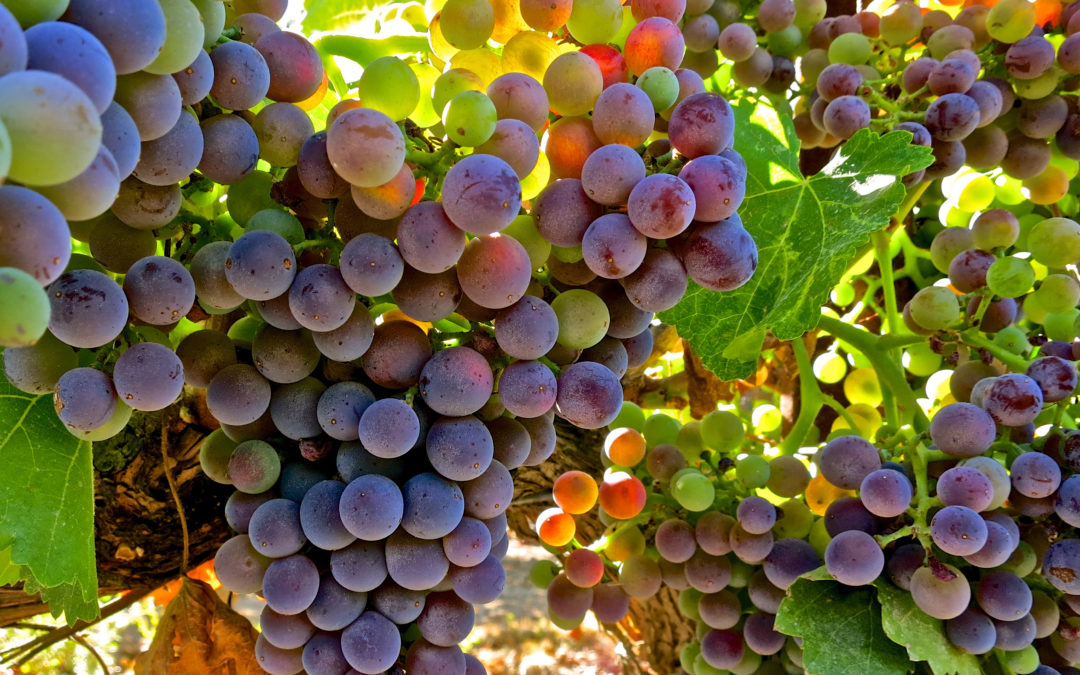 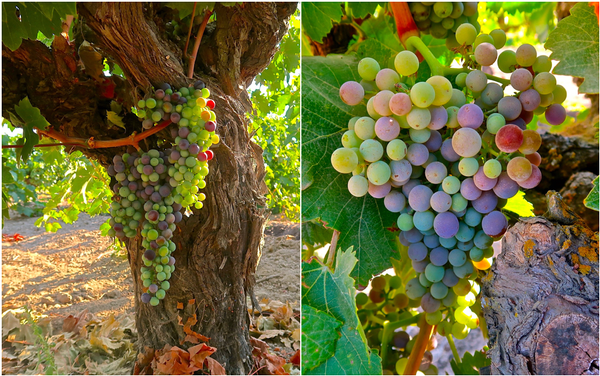 Mid-July 2020 veraison in Manassero Vineyard’s old vine Grenache block, planted in the 1940s on the west side of Lodi’s Mokelumne River appellation

As we’ve reached the middle and end of July, Lodi wine country has been experiencing a period of time known in wine lingo as veraison: a word derived from the French term véraison, referring to the “change of color of grape berries.” Call it the annual coming of age for grapevines, or a vinous bar mitzvah for grapes.

For black skinned grapes grown for red wines, veraison usually happens in a spectacular blaze of colors, from greens and yellows to reds and purplish blues and blacks. But it’s not just the transitioning of hues that farmers see in their vineyards during this time of year. It is also a signal that grapes have reached a mid-point of maturation. 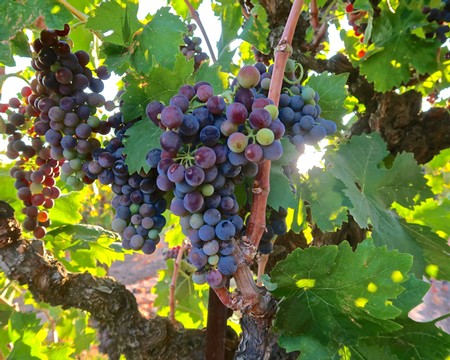 The vines cease accumulating green mass in their individual berries, outwardly manifested in their long, spindly growth of canes and leaves, and instead begin focusing attention on building sugars and flavor compounds in their clusters — the essential building blocks necessary for the production of good wine.

Lodi’s famous old vine Zinfandels tend to carry less crop, and because of that they are usually further along on the curve than other grapes, thus among the first to sport their coats of many colors — the berries popping on their stems like carnival balloons on strings. 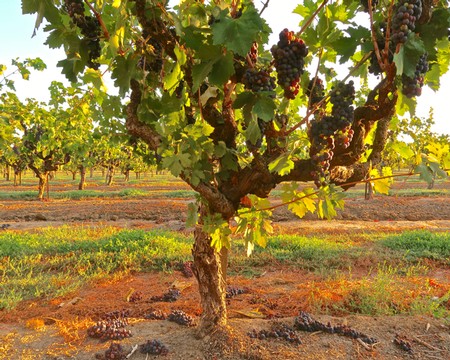 Other grapes such as Cabernet Sauvignon or Carignan usually lag behind by two, three, or up to four weeks, and end up being harvested that much later. But once red wine grapes complete veraison, their final, optimal ripening phase is roughly six weeks away — depending upon, as always, Mother Nature, who always has the last word.

In a Practical Winery & Vineyard article entitled Understanding Grape Berry Development, viticulturist James Kennedy once described the technical aspects of veraison as a period of time when…

The composition of extracted seed tannins changes considerably, and is characterized by a proportional reduction in the most bitter tannin components…. 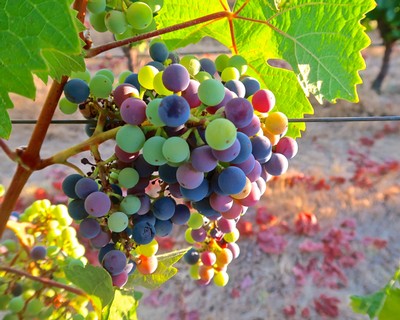 Skin tannins decline… and also become modified. Significant modifications that take place for the skin tannins include an increase in their size. Also of potential significance from a wine quality standpoint is evidence that extracted skin tannins are modified with pectins and anthocyanins (i.e. pigments)…. an important consideration in the areas of wine texture and color stability…

The big story following veraison is the tremendous increase in compounds — the major ones being glucose and fructose (i.e. the sugars that make alcoholic fermentation possible) — that occurs as a result of a total biochemical shift into fruit ripening mode… 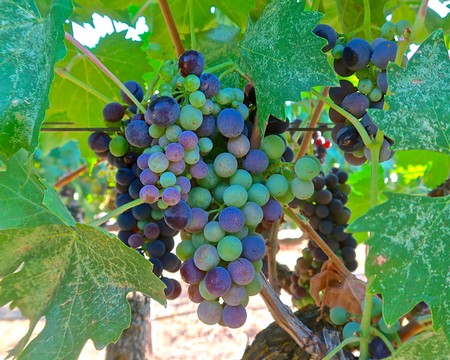 In more of a layman’s language, veraison is when grapes begin to get sweeter, tannins in skins and seeds start to get less bitter or astringent, and acids get less sour or puckery. For certain varieties like Cabernet Sauvignon, it is also when grapes taste less and less vegetal or “green” (i.e. reduction of methoxypyrazines); and when the aroma and flavor compounds suggesting fruit qualities begin to form, primarily in the skins of grapes, emerging like magic during the eventual fermentation process (for red wines, taking place in full contact with skins). 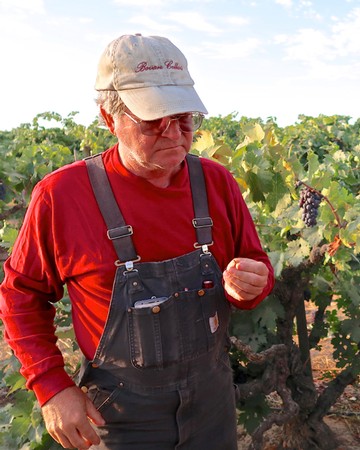 The three most important moments for any winemaker occurs before a berry even makes it into a winery. These are…

1. Flowering
2. Sizing — the berry cell division and berry cell expansion that occurs just after flowering, and
3. Veraison — the most carbohydrate-intensive period in the life of a grape 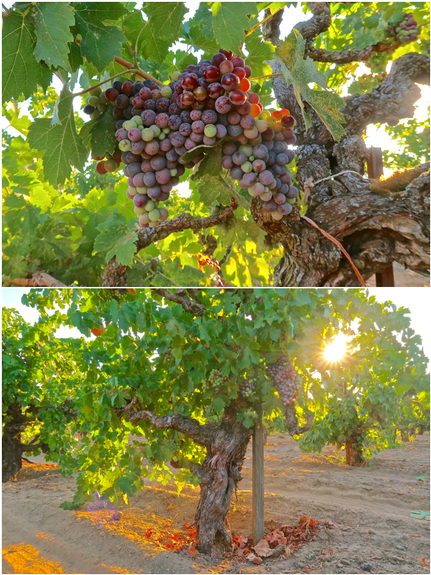 Veraison is also when the grapevine begins to kick in all the intra-cellular machinery it can muster to create color and flavor. If a vine is not in good balance, color and flavor will lag behind sugar accumulation. Unbalanced vines will take longer to mature— usually when sugars are excessively high, resulting in unbalanced, alcoholic or overripened wines. A good grower plays the part of helping vines find their balance at an earlier phase, well before veraison. This involves very intentional farming.

The big advantage of a region like Lodi is that it not only has great growers, it has lots of old vines, and even some ancient vines planted 100 years or more ago. Older vines, like good growers, know exactly what they’re doing. 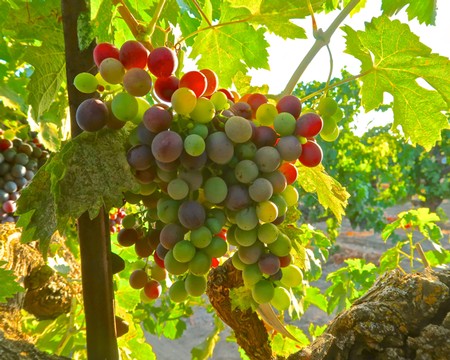 Close-up of Bechthold Vineyard’s ancient vine Cinsaut on July 23, 2020 — on target for an early September harvest

Vines, in that sense, are like people. When they’re very young they’re fun and exuberant, great to have around. But you can’t expect them to do any heavy lifting and they need guidance, like a child — you give them a Hello Kitty backpack and let them toddle along. Teenagers are stronger even though they still need direction, but you can give them an REI backpack, load them up with the cans of beans and march them out with you on long, rigorous trails in the Sierras. Fully mature adults know more, although they can still use a partner, or spouse, to help keep them focused. 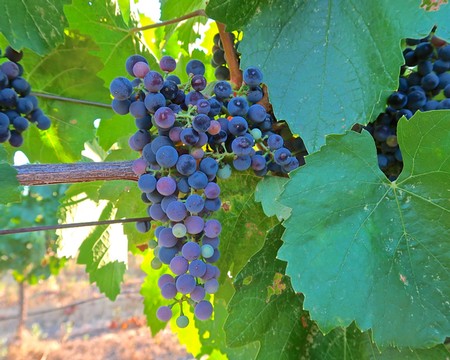 Older people may not be as capable of carrying the heaviest loads, but at least they know who they are. Old vines are like that. They may not produce a lot, but what they do produce is more likely to be very, very good. During times of droughts or heavy rain, they’re the ones who know what to do because they’ve seen it all before.

There is more grace, symmetry and wisdom to an ancient vine — things not usually found in youth. There is no relationship as nourishing as a relationship with an older person, just like what a winemaker finds when he partners with an older vine. Your chances of creating a great or memorable wine are that much higher. That’s the beauty of a region like Lodi. 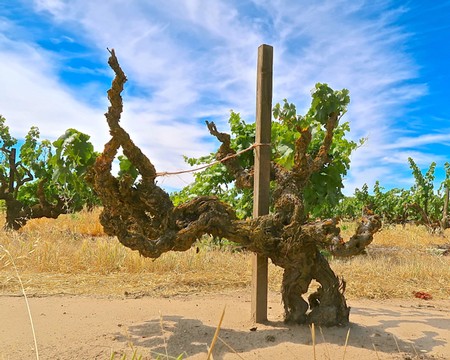 Telling the story of these ancient vines is a mission of the highest order. I may be speaking from an emotional standpoint, but to speak of the merits of old vines is to speak of what is right and true and unswerving in this world. We need the wisdom of age in this world, right now, more than ever. To respect and revere age while celebrating youth is a part of the balance of life that these old vines speak to. This is what we all need in our lives.

Now more than ever, old vines can teach us about our own selves, if we are only willing to listen to their voices! 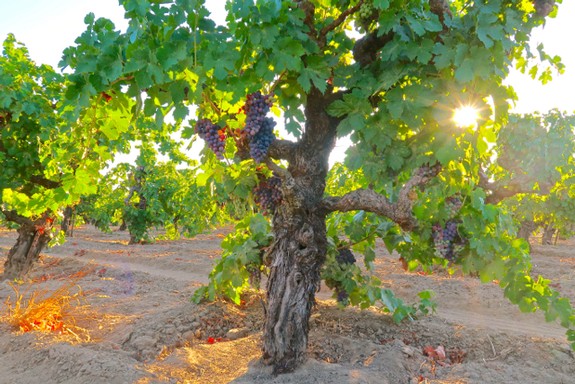 A final peek at the magnificent, historic Cinsaut vines of Bechthold Vineyard, soulful survivors of 134 years of practically everything thrown by Mother Nature, still thriving in the deep, sandy loam soils of Lodi’s west side

Randy Caparoso is a full-time wine journalist who lives in Lodi, California.  Randy puts bread (and wine) on the table as the Editor-at-Large and Bottom Line columnist for The SOMM Journal, and currently blogs and does social media for Lodi Winegrape Commission’s lodiwine.com.  He also contributes editorial to The Tasting Panel magazine and crafts authentic wine country experiences for sommeliers and media.