In the Vineyard with Paul Verdegaal

The 2014 season started off with Chardonnay budbreak just slightly ahead of average about 6 days, on March 9th.  As in 2013 warm daily maximums, but below average nightly lows have allowed for a below average accumulation in Growing Degree Days (GDD).  Drought conditions have continued and intensified from last season. Fortunately significant rain events in February and early March were perfectly timed to alleviate a lot of stress on the vines and partially refill the root zone available water.

It does appear that as the end of rain season approaches we will finish with about 60% of average for total rainfall this season; compared to 85% last year.  What is also different this year compared to 2013 is the late winter rains were heavy and very effective at recharging soil moisture this year. Many growers applied one, two or even three winter irrigations. These investments will be appreciated by the vines and should pay off in both short term and long term. The deep soil profile is dry, but still fair, considering how dry it was until the last rains. This is the driest year since 1976, but still second compared to the 1976-77 drought.  The problem is there are more acres of grapes, more people and environmental diversions required. Future water supplies will be a concern, unless water can be shipped in by “Bullet Train”.

There was no frost this year after May 1st. I find no records of area wide frost in over 50 years.

There have been some early growth and even dieback problems on young vines planted in the last four years. Several sites have shown delayed budbreak, erratic and non-uniform shoot growth, mostly Cabernet Sauvignon. It appears there is scattered winter cold injury from drought conditions, some sites with a large first time, crop and a very cold December with minimum temperatures as low as 18º F. 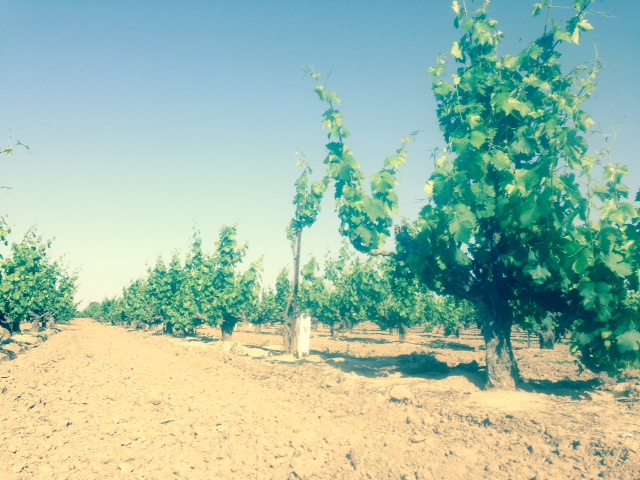 Unfortunately for young vines damaged by winter cold, some retraining may be required. Older vines should not be significantly affected and grow out of delayed budbreak or erratic early shoot growth. Very old vines (Zins) with virus infections such as Esca, Measles, or Vine Decline or other stress such nematodes or soil restrictions, may show more dead arm and/or dieback symptoms this year.

This spring, the 2013 situation provides growers with the opportunity to control shoot growth. But this year deep soil moisture is much better and vines may tolerate an early hot spell better than last year. But caution should be used with weaker vines, young vines and blocks expected to produce high yields.

With cover crop present, soil moisture will be severely depleted this year and earlier irrigation start will be important Extra water during a hot spell will be even more crucial this year. In a dry year it is a good idea to stay ahead of “normal” ET vine demand with drip irrigation instead of using deep soil moisture early. Irrigate so as to maintain what little deep moisture is available for mid to late summer and into harvest.

When it comes to Powdery Mildew, keeping costs down and avoiding resistance development probably requires a program that includes sulfur at some point in the season.  Wettable or dusting can be a very effective choice for avoiding potential resistance development.  As sulfur cost escalates and threats of regulatory restrictions occur, some of the newer materials can be more cost competitive. Ground coverage is still much slower than with dusting sulfur.  Whatever the material of choice, a good powdery mildew program includes some sulfur, rotation of materials in a season and between years, and complete coverage. Each is important.  Also, shorten intervals between treatments as disease pressure increases.  Below is a general guideline from research and experience (as I understand).

Gophers, voles, squirrels, rabbits and their nemesis coyotes have become very active at this point.  There seems to be fewer than last year, which is good. (Also I noticed lots of Ladybugs early on, which is also good.) Besides the predatory “benefit” of coyotes, owls, hawks and snakes (or cats), other control measures for the above pests may still be needed before they reproduce and litters begin to disperse.  See the UCIPM guidelines for some ideas in the Home and Garden section (all that I could find, but of some help): 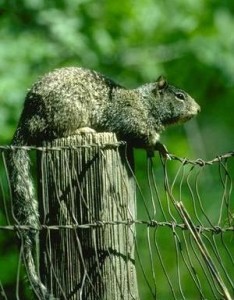 Continue to be on lookout for Vine Mealybug (VMB) as it spreads.  There are options for control, and Movento (spirotetramat) returned last year as a possible choice of several materials.  VMB is now becoming active enough to begin looking.  Look in areas of bird roosting and watch for high traffic spots of ants that may lead into vines.

Light Brown Apple Moth (LBAM) is spreading in the Manteca and Tracy areas and unfortunately may begin to be seen near several of the landscape nursery operations around the county. Be on the lookout.   It is controllable as is the more traditional pest of Omnivorous Leaf Roller OLR.  LBAM does unfortunately require quarantine and more paperwork.

The “new” problem appears to be identification and recognition of a new Grape Leaf Roll associated Virus (GLRaV) named Red Blotch virus.  As in the past, order from reputable nurseries, purchase Certified Virus tested vines and/or know the history of any variety selections chosen.  It seems to be a somewhat typical GLRaV, but it has become apparent in some many locations across so many varieties and regions that debate and investigation continues on how it might be spread.

There are big challenges for 2014. As in 2013 these include expanding regulations, labor management, input costs, the “Affordable” Health Care Act and increasing water scarcity. Wine sales are still up, and as the mini-boom of replanting old blocks or new site planting slows, there may be some balance in the market.. Consumers are learning more about the quality and value of local wines.  Lodi remains a good place to grow grapes. Good luck in the year of the Horse.