In the Vineyard with Paul Verdegaal – May 2015

As of the rainfall total at the end of April, it looks like we are entering a fourth year of drought. This is more severe than the 2007-09 drought and the dry spell from 2002-03.  The current rainfall season will end below long term average. However, there has been some good news in the fact that this year’s rainfall occurred in a fairly effective pattern to provide some good deep soil moisture, with a couple of good natural “irrigations” in April. Things could change somewhat in May but on average very little rain occurs this time of year. The historical caveat that California is always a year away from drought is well founded. 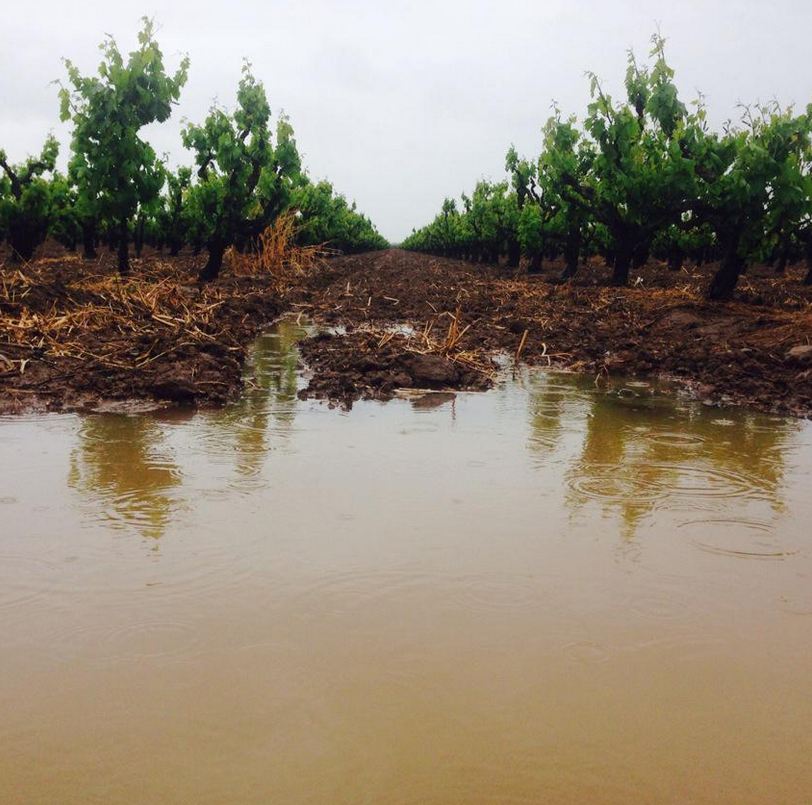 On the bright side, unlike last year, deep soil moisture is very good as a result of the December rains. And a completely dry January and below average February were mitigated by cold mornings, fog and low weed growth. With a somewhat recharged the soil profile, most vineyards are not as stressed as last year. And it has not been necessary to winter irrigate, compared to last year when many growers irrigated two or three times or more during the winter.

The total rainfall for October, November and December ended up at 9.2 inches for the North County. Rainfall was less effective in the South County with 7.5 inches. January was historically low with no rain recorded. However, January did see some very foggy days that provided almost measurable precipitation. 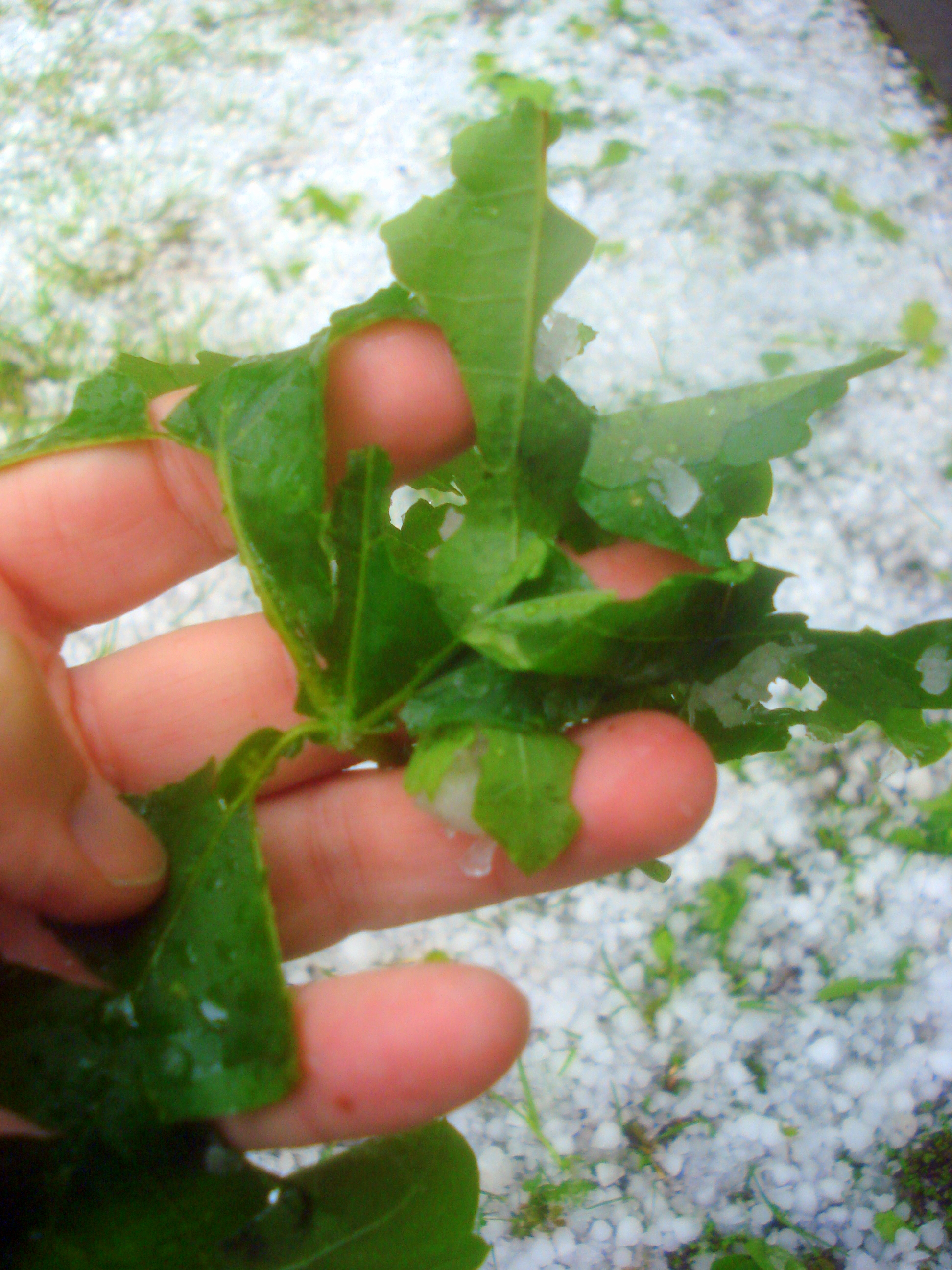 Grapes are a low demand crop for water and nitrogen, compared to most other fruits and nuts, but extremely dry conditions can affect the strength and uniformity of bud push in addition to negatively affecting the final development phases of this year’s fruit buds. So there was some reported budbreak variability in older vines or vineyards that may be fighting off disease or soil pests.

A very heavy rain on April 7th and another good rain on April 24th alleviated drying soil conditions. The bad news was that for a few localized areas in the district hail about the size of peas damaged scattered vineyards and orchards, with losses ranging from slightly scarred leaves and shoots to total defoliation and crop stripping.

Now is a good time to check out the soil profile with an auger or shovel to help understand your soil moisture. It seems there is good deep soil moisture form the December soaking as evidenced by the strong bleeding of vines this year at pruning. 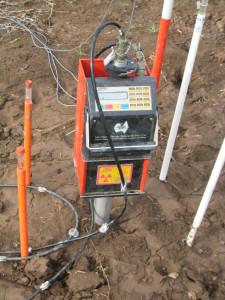 A very intense winter cold hit in the first week of December, 2013 and caused some winter injury. Very young vines and very old vines seemed to be worst affected in scattered locations, even with mid-winter irrigations. Some old vines may still need some dead wood removal, while young vines might need some minor retraining.

As spring unfolds and vine canopies develop, consider monitoring soil moisture either with soil moisture probes or a quick check by auger. Simply using a shovel will work in sandy soils. This is particulary important in traditionally dry areas of your vineyard(s) and especially if cover crops are present. It’s good to remember in this dry period that cover crops, planted or resident, will use more water than clean cultivation, as indicated by work done by Terry Prichard.

Even with warm temperatures, vineyards have only been using about 0.10 of an inch of water per day at “full” or 100%ET” (evapotranspiration) levels, mostly from the soil moisture, if present. This is equal to a very “seat-of-the-pants” 2 hours’ worth of irrigation time per day of full ET, depending on emitter output and spacing. This will increase with warmer weather. All that considered, it’s good to stay ahead of vine demand even if you are on a strict Regulated Deficit Irrigation (RDI) regime that uses less than full ET. This helps avoid using deep soil moisture early in the season. Deep moisture is good to have available for late summer and early fall hot spells. The dry year makes it easier to control vines through irrigation. Given the drought, it will be good to be earlier rather than later with starting irrigations.

Budbreak did occur about 15 days ahead of average and beat the old record of March 1st that I observed in 1997 (see table above). A curious weather pattern this winter was one of very mild mid-winter temperatures with scattered periods of cold and fog. Overall, total chilling hours (hours below 45 F) ended up below average and may have had a slight if any effect on budbreak. Chilling hours totaled 708, compared to the long term average of about 800. Grapes require few chilling hours but a “good chill” may help encourage strong and uniform budbreak. 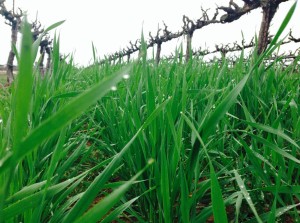 Weed growth started out less than average, but good soil moisture the recent rain has encouraged some new growth. Effective weed control means not waiting for weeds to completer their growth cycle and set seeds of future problems. This year glufosinate (Rely and several other new generics) will be available. If you have had troubles with Horseweed or Fleabane, I have seen some effective “burn down” with combinations of glyphosate and glufosinate in ratios of 2 or 3 parts glyphosate to 1 part glufosinate. Check with your PCA. Remember that it is important to control weeds when they are at a small growth stage and especially before they set seed stage. This is important not only for good control, but also to prevent herbicide resistance.

Rotation of herbicides for particular weed species continues to be important and should be considered. Combinations of materials, either foliar or residual can help achieve better weed control in different sites. There are varying opinions on how best to avoid resistance in pest management (high versus low label rates, combinations of materials or alternate use of individual compounds). But with weeds it appears there is more agreement that high label rates may be better and combinations of materials with different modes of action are also helpful. This is my take from sitting in on some discussions among experts. If you have related questions, check in at www.ipm.ucdavis.edu or www.wric.ucdavis.edu.

No new pests have been reported in fields around the County. The new Ag Commissioner, Tim Pelican, and his staff have done a lot of work and have been helped in their efforts by growers in the ongoing vigil for new pests.

The bad news is Light Brown Apple Moth (LBAM), continues to establish and is scattered around the County. It’s still under a quarantine protocol. The good news is that it’s easy to control. It is a Lepidoptera pest very similar to the OLR and it seems to be susceptible to the same biological control from native beneficial insect predators and parasites. If you are within a mile of a commercial nursery you probably are in a quarantine zone. If you haven’t been contacted by the Ag Commissioner’s office, you should check with your PCA.

So far the Spotted Wing Drosophila (SWD) doesn’t seem to do well in vineyard situations. It is a concern for cherry growers, but currently not grape growers. If you do have cherries next door, it might be good to keep an eye out if you do suspect excessive occurrence of the Sour Rot seen last year.

The most recent arrival in 2012 is a new leafhopper that has been reported in Lodi/San Joaquin County. This is the Virginia Creeper Leafhopper (VCLH). As its name suggests, it is from Virginia (by way of Canada, Washington, and Oregon) and thrives on creeping ivy species. But it also does well on many crops. The hope is that it’s not much different than the regular Grape Leafhopper (GLH) or Variegated Grape Leafhopper (VGLH); and may be controlled by beneficials and sprays if needed.

A new pest to be aware of is the Brown Marmorated Stink Bug (BMSB). As its name indicates it is a fairly nondescript bug that appears similar to one already here. If you see large numbers of a brown stink bug congregating near buildings or landscape check with the Ag Commissioner, or our office or the web site: http://www.ipm.ucdavis.edu/PMG/PESTNOTES/pn74169.html

A thought for the day: “The object of life is not to be on the side of the majority, but to escape finding oneself in the ranks of the insane.” — Marcus Aurelius