Effect of Light Environment on Methoxypyrazine Content of Cabernet Sauvignon 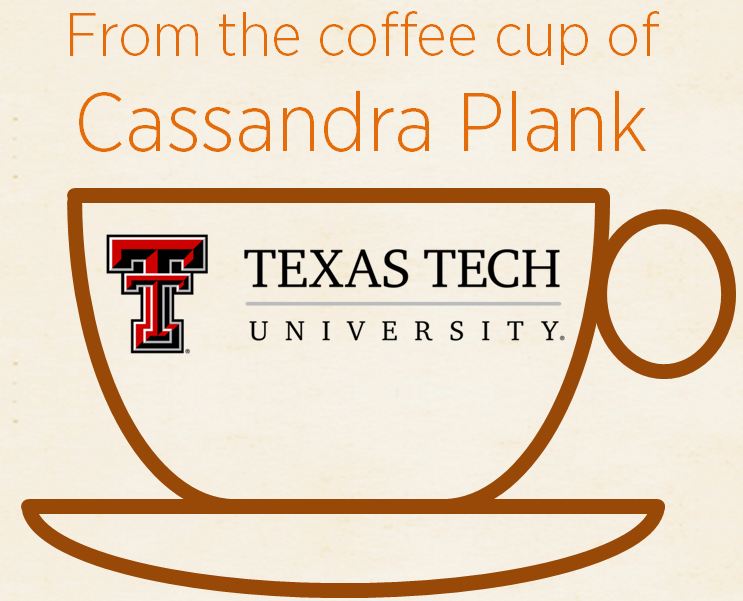 Sunlight levels can affect a variety of fruit characteristics in winegrapes. This research focused on how light levels impact the presence of a class of aroma compounds, methoxypyrazines (MPs), which are responsible for vegetal aromas such a green bell peppers, green peas, and asparagus. This study examined the effect of light and/or heat on the accumulation of MPs in Cabernet Sauvignon. The results indicate that shaded clusters accumulated more MPs, specifically 3-isobutyl-2-methoxypyrazine (IBMP) when compared to clusters exposed to either sunlight or supplemental LED light, and that light played a greater role than heat did in the presence of IBMP. This study illustrates the importance of adequate light exposure to ripening grape clusters in order to mitigate excessive MP accumulation.

MPs are found in varieties such as Cabernet Sauvignon, Sauvignon blanc, Merlot, and Cabernet franc. They are primarily allocated in berry skin, seeds, and stems, with little to none found in berry pulp. Two prominent MPs to note are IBMP and 3-isopropyl-2-methoxypyrazine (IPMP). Rather than being synthesized elsewhere in the vine and translocated to fruit, these compounds are synthesized within berries. Previous research has shown that MPs begin accumulating at berry set and peak before veraison, then progressively degrade during fruit ripening. Therefore, fruit that is harvested prematurely tends to have greater MP levels. People are sensitive to these aroma compounds and can perceive them at low aroma thresholds in finished wine. At low concentrations, these aroma compounds can contribute to varietal characteristics. However, at higher concentrations, they can be unpleasantly herbaceous. Therefore, it is important to understand what factors can affect the presence of these compounds. 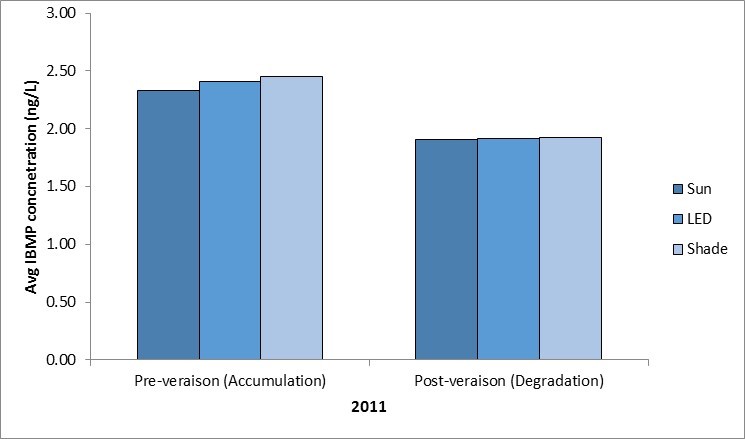 It has been determined that light and/or heat play a major role in the presence or absence of MPs because MPs are generally greater in wines from cooler climates. Previous work has examined the effect of sunlight by using light-altering treatments, including shoot positioning, vine hedging, and using shade cloth to create a shade treatment. However, it is difficult to separate the effect of light and consequential heat, because heat is an effect of light. For this research, a novel light emitting diode (LED) treatment was utilized because LEDs emit light without emitting excessive heat. LEDs can emit the full visible light spectrum, with spectral composition easily controlled, and they are cooler when compared to high-intensity emitters with operating temperatures ranging between 25-35 °C. Ultimately, this study aimed to separate light and temperature effects on MP levels, and examine the effect of cluster light environment on MP development. Another goal of this study is to suggest any implications for vineyard management that will, in turn, impact wine quality. 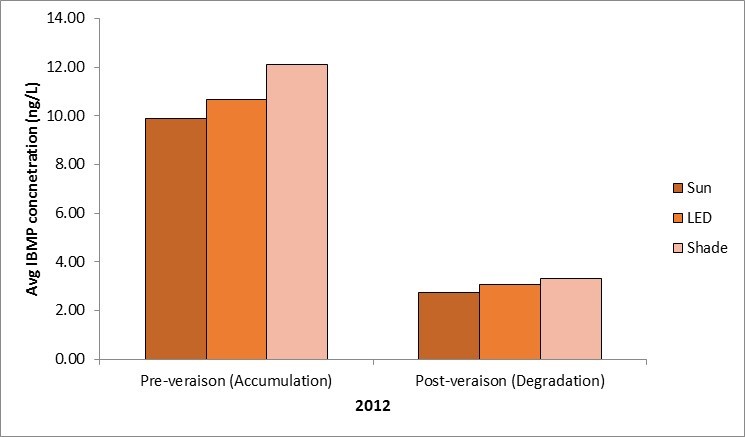 This study examined MP content in Cabernet Sauvignon grapes grown in the Texas High Plains AVA, a hot, semi-arid climate with high elevation. MP content was examined in the pre-veraison (accumulation) period, and post-veraison (degradation) period. Three light treatments were used: full sun, full shade, and full shade with supplemental LED light (Figure 1 a and b). Treatments were applied beginning approximately mid-May in 2011, 2012, and 2013 at the research vineyard at Texas A&M Agrilife Research Center, Lubbock, Texas. Temperature and light interception were monitored in the vineyard in order to compare treatments. Watchdog temperature sensors were used to record cluster temperature. Weekly photosynthetically active radiation (PAR) measurements were collected around local solar noon so that light intercepted between treatments could be compared. 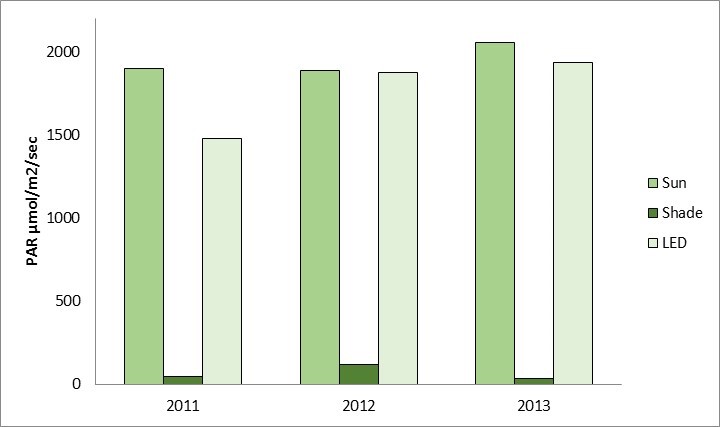 This research attempted to separate the effect of light and heat on MP levels in Texas-grown Cabernet Sauvignon. Results indicated IBMP was the only MP detected and shaded fruit accumulated more IBMP than the sunlight treatment. For all treatments, degradation occurred during ripening, despite relative and absolute amounts varying among seasons (Figure 2 a and b). Average IBMP was approximately 4.5 times greater in 2012 compared to 2011. Final amounts of MPs were similar between years, therefore relative degradation in 2012 was greater compared to 2011, at about 70% and 20%, respectively. Differences between years may be explained by weather variation such that clusters were exposed to more accumulated light in 2011, which was a hotter, drier year than 2012 and 2013.

Shaded clusters intercepted the least amount of light according to PAR data, with LEDs performing similarly to sunlight or slightly lower (Figure 3 a and b). Because shade clusters were not significantly cooler than clusters grown in light, these results indicate light plays a greater role in the presence of MPs (Table 1). Average high cluster temperature decreased across the three years by approximately 6 °C total for pre-veraison and 4 °C total for post-veraison. One exception to the trend in declining temperature was 2011 post-veraison, where the average high cluster temperatures for the LED treatment average was cooler than the shade treatment for undefined reasons. It is important to note that LED panels did not contribute a significant amount of heat compared to the shade treatment, so panels functioned according to their intended purpose. 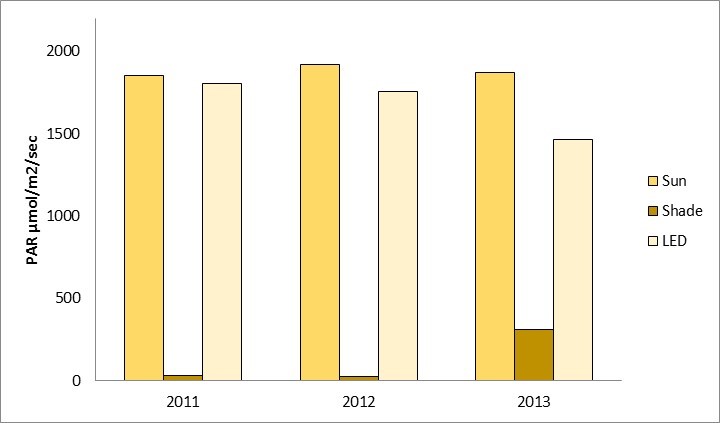 Based on cluster temperature and PAR measurements, LEDs successfully performed similarly to natural sunlight, however there were circumstances where LEDs provided less light than full sun. LEDs provided light to a naturally shaded environment without increasing cluster temperature. Therefore, the effect of light and temperature were effectively separated. Fruit from the LED treatment yielded consistently intermediate levels of IBMP, which suggests that while LEDs performed similarly to natural sunlight, there were some differences.

These results indicate that light plays a significant role in the content of MPs in Cabernet Sauvignon. If these experiments were conducted under cooler conditions, speculative results may show even greater levels of MPs, particularly just before veraison. Under actual vineyard conditions, these results indicate adequate light exposure in the pre-veraison period is important to manage MP levels in fruit. MP management can be conducted by controlling vigor, which will result in excess shade. Vigor can be controlled through water applications, using suitable trellis and training system, and appropriate canopy management.